Sweet and savory: Zongzi beyond your expectation
By Hong Yaobin 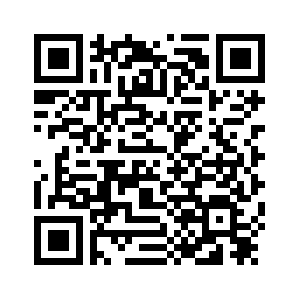 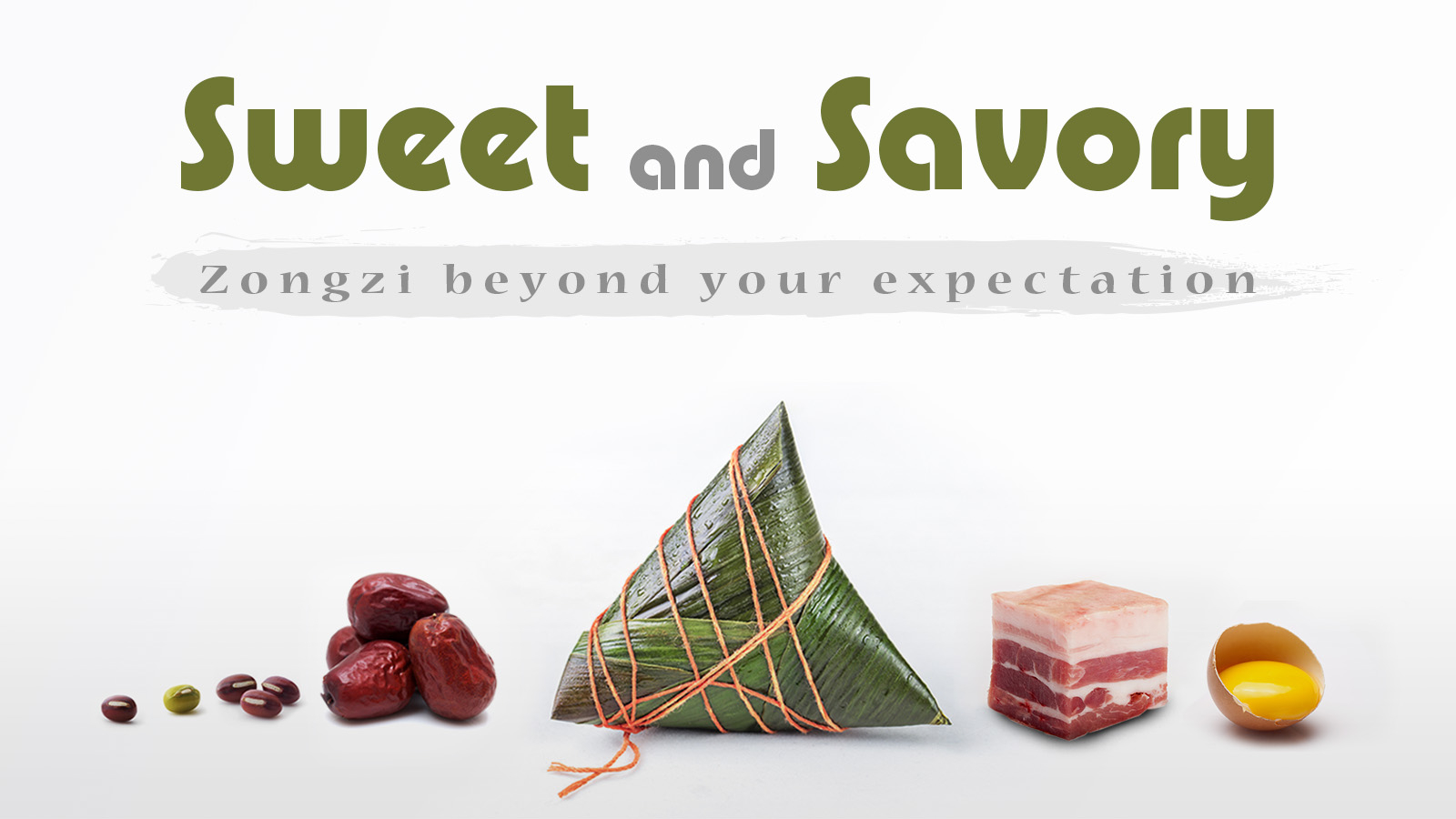 The zongzi is not just a snack with glutinous rice and delicious fillings, but a centerpiece of the Dragon Boat Festival in China.
The festival falls on the 5th day of the fifth lunar month (June 18 this year), which commemorates the legendary ancient Chinese poet Qu Yuan (340-278 BC). The zongzi, or rice dumpling, also speaks to the tradition of home cooking in different places and regions.
The enormous variations for this time-honored favorite at home and abroad can certainly surprise you. Here are just several examples to titillate your taste buds.

The most famous – Jiaxing zongzi 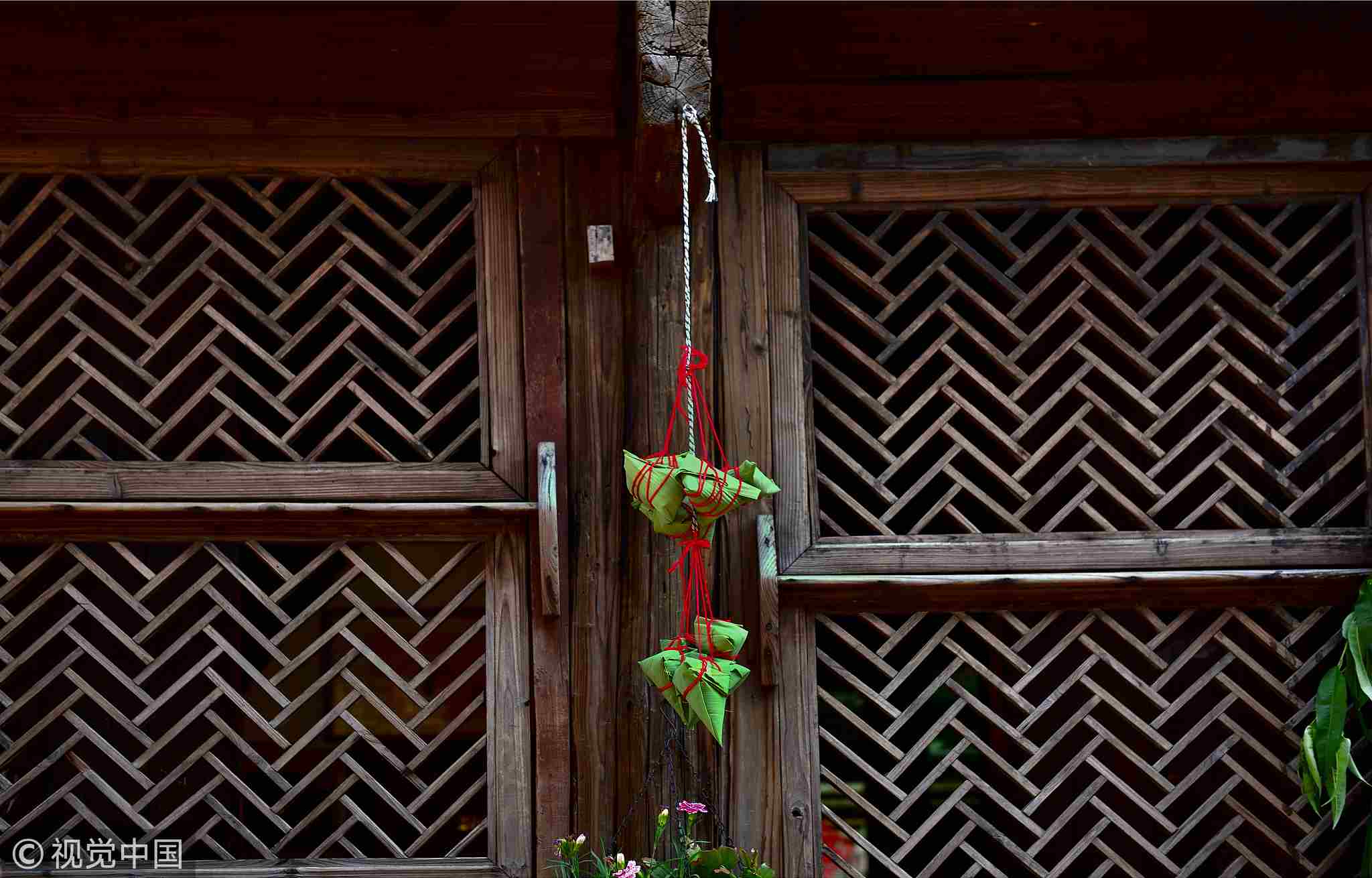 May 27, 2017: Families in Jiaxing hang the batch of zongzi in front of the window during the Dragon Boat Festival. /VCG Photo

May 27, 2017: Families in Jiaxing hang the batch of zongzi in front of the window during the Dragon Boat Festival. /VCG Photo

Jiaxing zongzi, named after the city of Jiaxing in east China’s Zhejiang Province, is the most sought-after kind of zongzi on the Chinese mainland during the Dragon Boat Festival thanks to the local time-honored brand Wu Fang Zhai, the largest zongzi manufacturer and retailer here. More than six million zongzi are reportedly distributed to its retail stores across the country per day in the most recent peak season.
In a triangular pyramid shape, Jiaxing zongzi is well known for its typical filling of marinated pork which is neither too salty nor too sweet, satisfying the palates of the majority. Sometimes it is also filled with sweet bean paste, lotus seed, longan fruit or peanut. 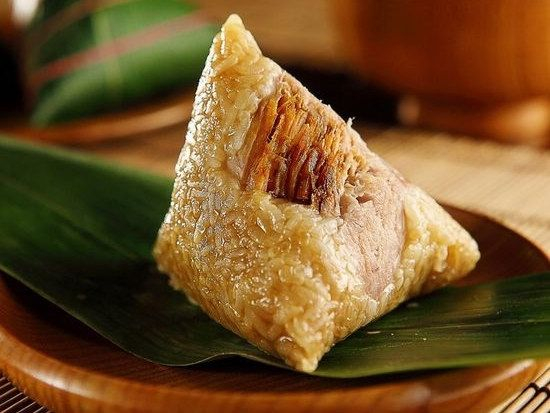 Meat fat, fried in oil after being boiled for several hours, is usually mixed in with the fillings, which makes the zongzi crispy but not greasy.
It is no exaggeration to say that Jiaxing is the hometown of zongzi as the delicacy appears on almost every family's menu year-around. In addition, Jiaxing owns the first and only zongzi museum. 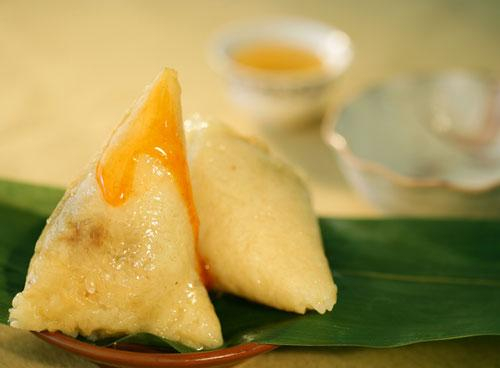 The “cold honey” zongzi has the longest history in the northwest Chinese city of Xi’an. This type of zongzi originated in the Tang Dynasty (618–907) according to ancient records, in which it is described as a food with a gorgeous jade-like appearance.
Made with cool glutinous rice, cold honey zongzi without filling is the perfect choice during a sweltering summer day or as a dessert. Sliced into thin pieces and served on a plate, the delicate, carb-loaded dish will greatly delight your taste buds when eaten with honey or osmanthus fragrans syrup. 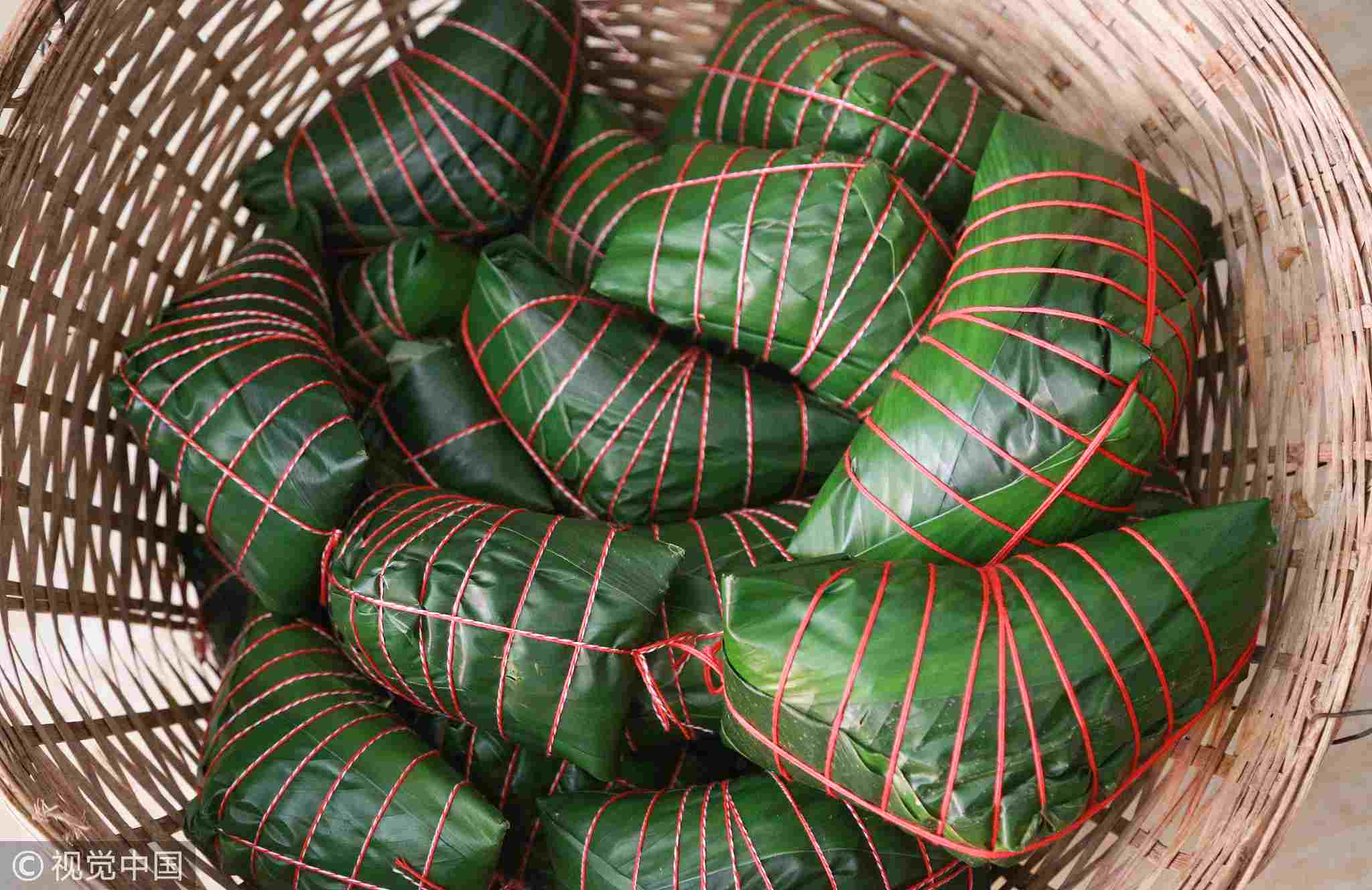 Stuffed with fat, lean pork and peeled mung beans, each Nanning zongzi weighs about one kilogram. It is also called a “pillow zongzi” due to its huge size.
Also in south China’s Guangxi Zhuang Autonomous Region, people once made the largest zongzi containing 50-kilograms of glutinous rice mixed with soybean sauce and roast pork. 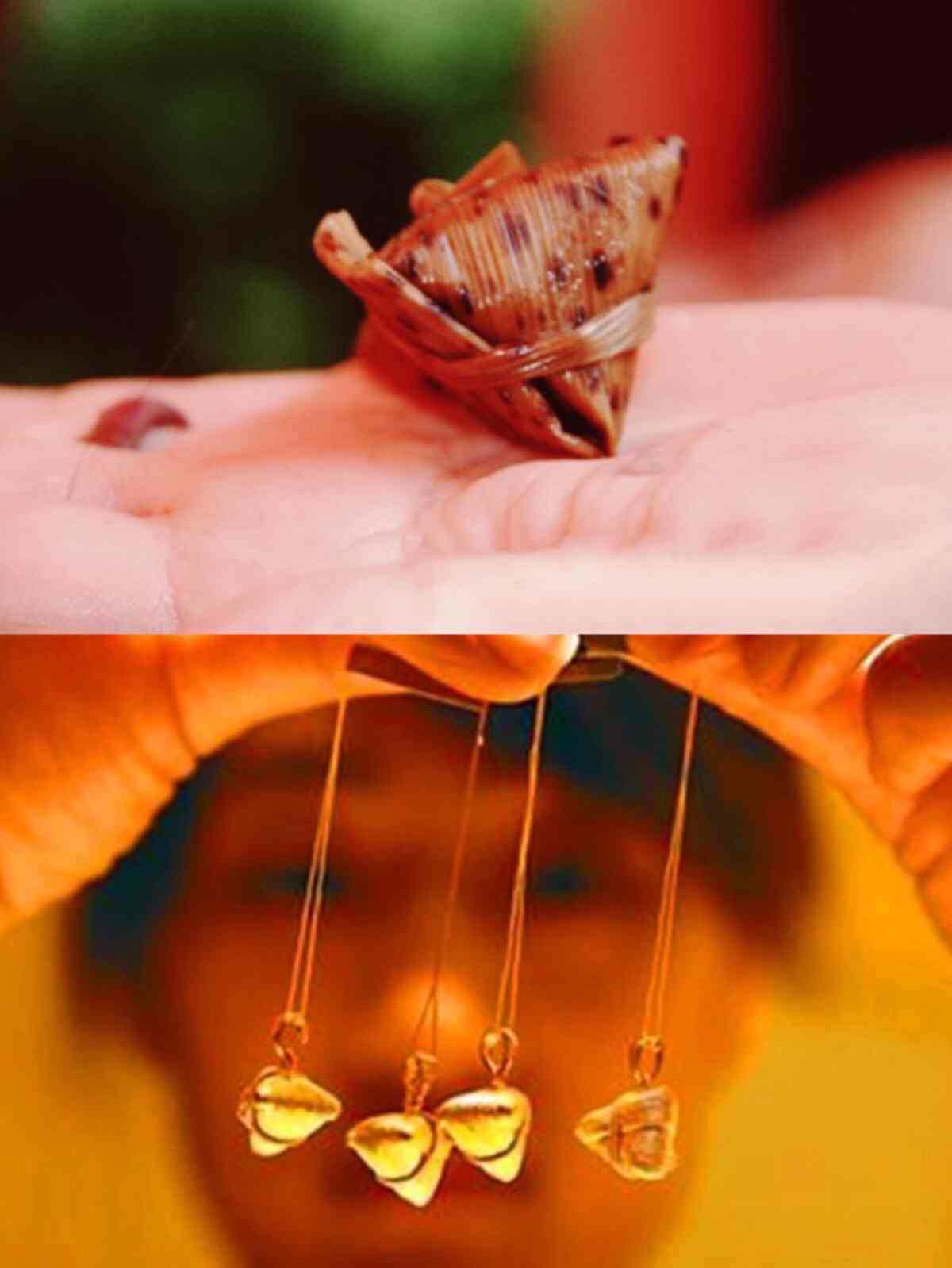 The smallest one sold at the City God Temple of Shanghai measures four centimeters long with ham as its filling and fits quite comfortably in the mouth. Some prefer to enjoy it with a cup of Chinese tea.
Some restaurants in Shanghai serve tiny zongzi barely larger than a person's finger. Fifty grams of glutinous rice and four little cubes of ham are wrapped up into a batch of four cute zongzi.

The most romantic – Hangzhou zongzi 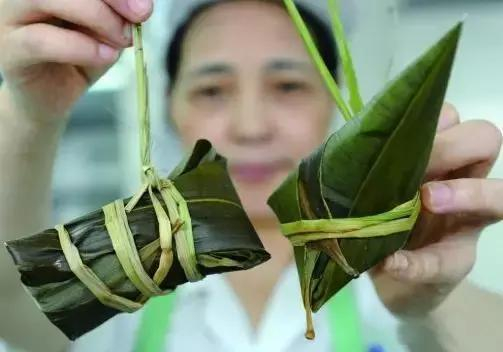 In Tangxi ancient town in Hangzhou City, east China’s Zhejiang Province, zongzi even has “gender,” divided into “males” in the more common shape of a pyramid and “females” in a quadrangular pyramid. The latter is also nicknamed the “axe zongzi".
Aside from the shape, what’s inside is another clue to the zongzi’s gender. Male zongzi are usually stuffed with nothing or shredded lotus root whereas female ones are filled with red beans or meat. People in Tangxi town recall that zongzi used to be served as a gift, that symbolize the beginning of a formal relationship among couples.
Boys with pyramid-shaped zongzi and girls with axe zongzi would attend a party for singletons, where the boy would give his zongzi to the one he falls in love with, and if he receives the girl’s zongzi in return, a love story would blossom.

The most global – Hokkien zongzi 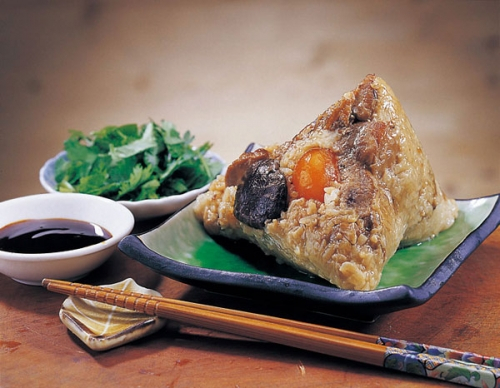 With Hokkien migrants across the world, Hokkien braised pork zongzi (also known as bakchang or machang originating from the Hokkien dialect), embracing fame at home and abroad, is very likely to be the most global one.
Braised pork zongzi is one of the most typical specialties in southeastern China, which is also popular among Chinese communities in Southeast Asian countries like Singapore, Malaysia and Indonesia.
The inside of the zongzi containing well-braised pork and extra fillings of mushrooms, dried shrimp or oyster and lotus seeds is the selling point. Wrapped with reed leaves and trussed with twine, the Hokkien version of zongzi has a rich flavor thanks to the sticky rice, which is moist but not mushy and seasoned perfectly with broth after being steamed.

Spread through the Chinese diaspora, zongzi today involves many variations in different countries around the world.
In the shape of a thin elongated cone, Japanese zongzi, called “chimaki” and mostly eaten during Children’s Day on May 5, uses mashed rice flour instead of glutinous rice and is stuffed with various kinds of fillings like fruit, egg yolk or fish. 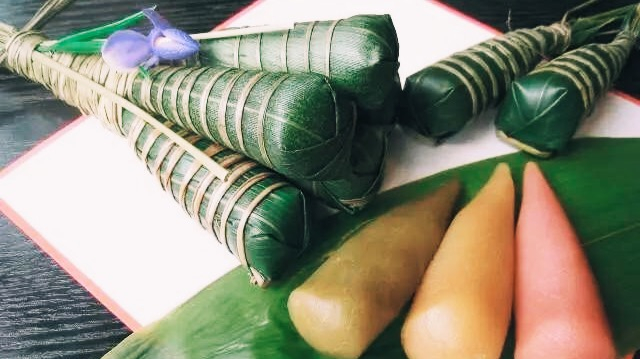 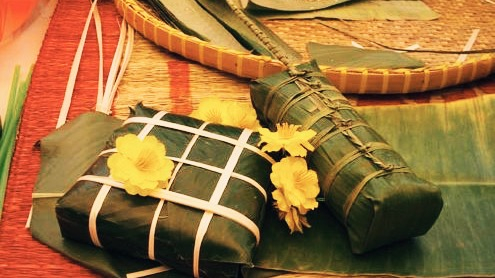 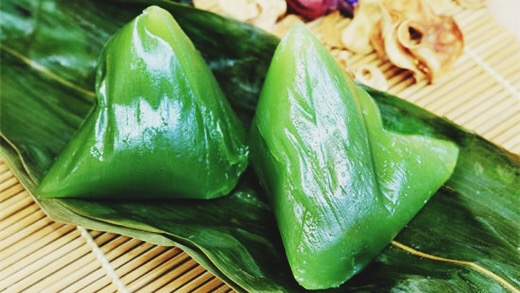 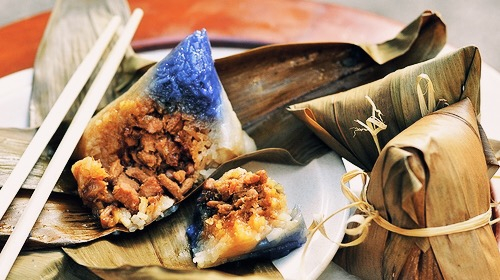 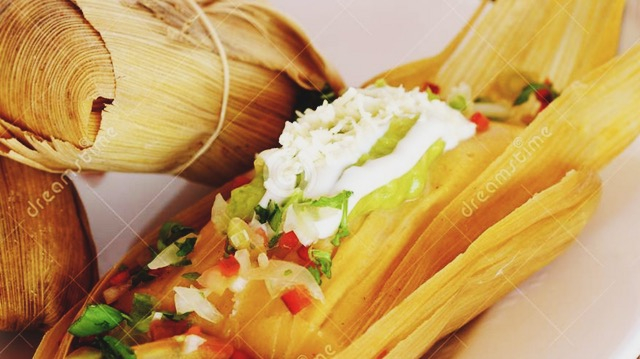 The Vietnamese make two shapes of zongzi, rounded ones (referring to heaven) and square ones (referring to earth), which contain unique fillings mixed with pepper, mung beans and pork wrapped with banana leaves. Eaten on the same day as the Chinese Dragon Boat Festival, the rounded and square zongzi are a symbol of good fortune and the bumper harvest.
Singaporeans love flowers, thus they immerse zongzi in flower juice and offer it as a treat for guests. The rice flour becomes green after absorbing the juice and glitters and looks translucent.
As a specialty of Peranakan cuisine, Malaysian zongzi (Nyonya chang) is made of regular glutinous rice and blue rice immersed in blue flower juice typically stuffed with mixed spices, pork mince, wax gourd and roasted peanuts. The authentic Nyonya chang ought to be steamed or boiled with coconut milk.
Mexicans also have their own version passed down through history in the region called “tamale,” made of corn flour or dough with the fillings of meat cubes, chilies, cheese and any ingredients according to personal palates. Wrapped and steamed in banana leaves or corn husks, tamales are full of flavor and are quite a meal on their own.
(Cover image by Li Jingjie)