Sophie Marceau: 'China is part of my life'
By Hong Yaobin 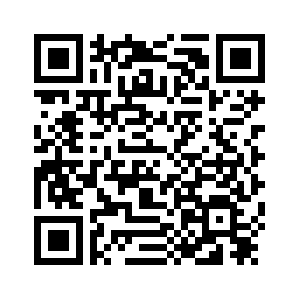 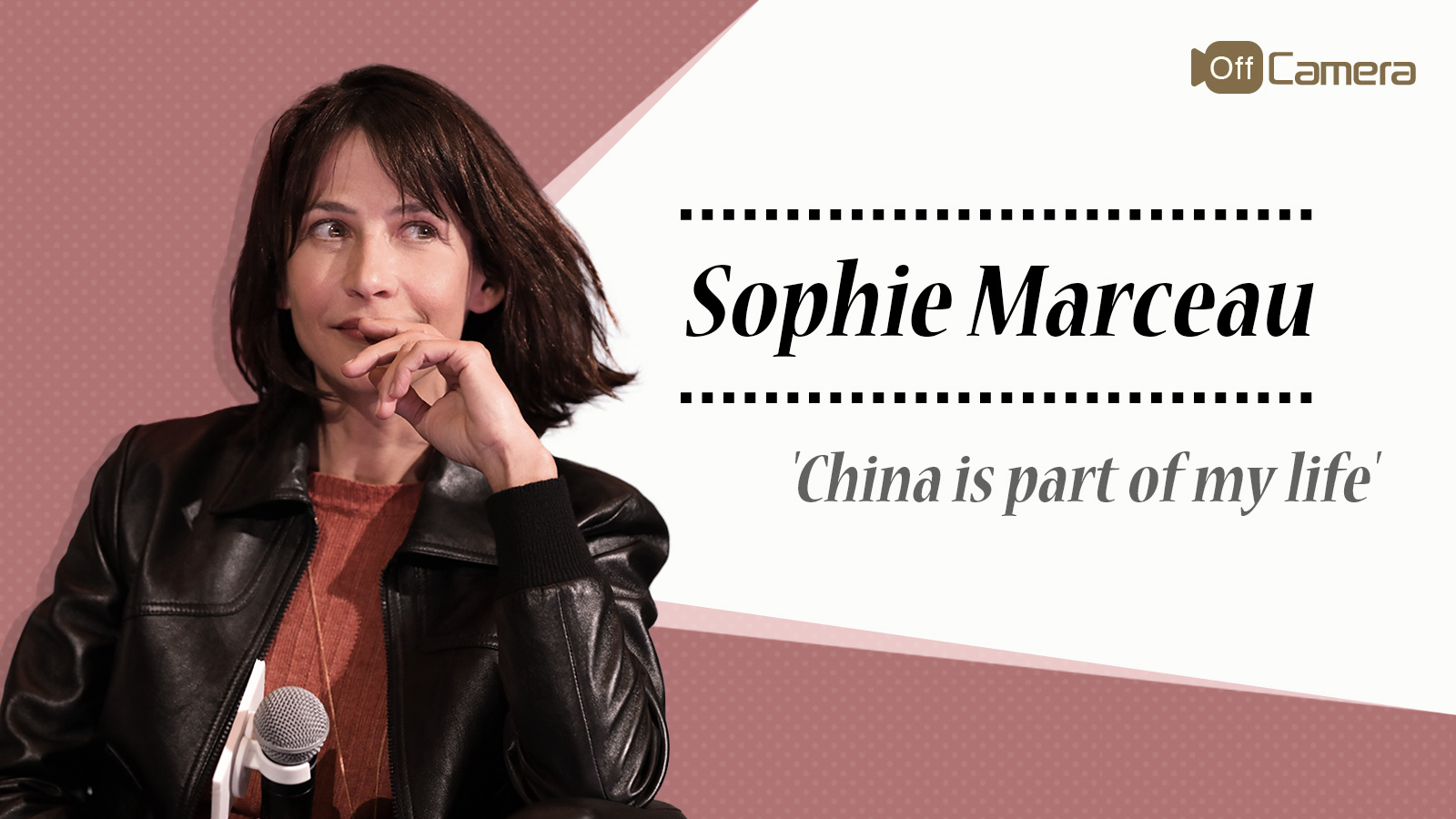 "Merci beaucoup," said Sophie Marceau in tears, after she volunteered to serve as the witness to a spontaneous marriage proposal by one of her Chinese fans. "It was a really touching moment," she said, "Better than in the movies."
The globally famed French actress brought her latest film "Mrs. Mills" to China to the Beijing Film Panorama – a screening section during the ninth Beijing International Film Festival (BJIFF).
Marceau, who is also a director and author, met her Chinese fans after the screening of her movie on Sunday at the China Film Archive in Beijing to talk about herself and her work. 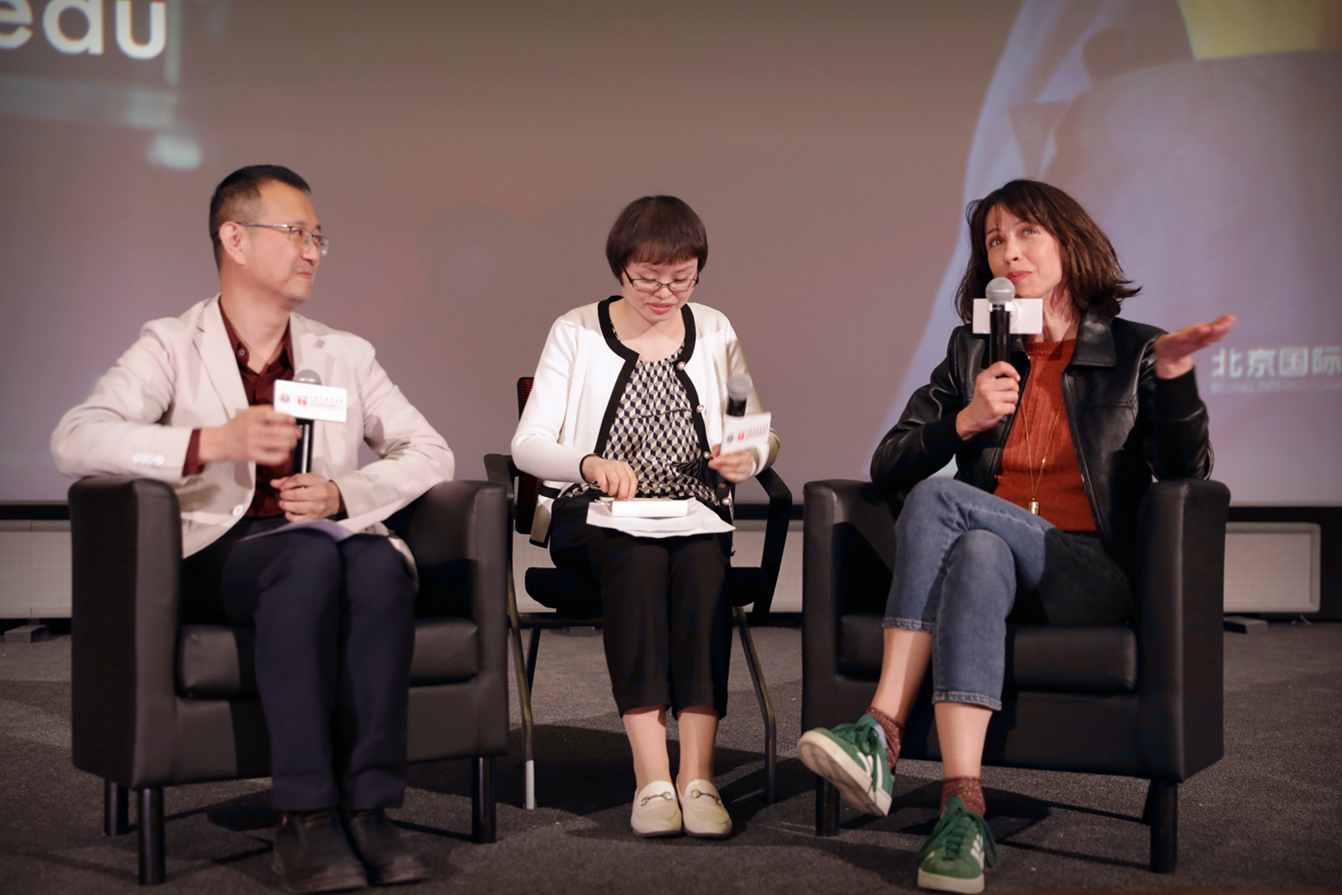 French actress Sophie Marceau (R) brings her latest film "Mrs. Mills" to the Beijing Film Panorama – a screening section during the BJIFF 2019, meeting her fans after the film screening at the China Film Archive in Beijing, April 14, 2019. /CGTN Photo

French actress Sophie Marceau (R) brings her latest film "Mrs. Mills" to the Beijing Film Panorama – a screening section during the BJIFF 2019, meeting her fans after the film screening at the China Film Archive in Beijing, April 14, 2019. /CGTN Photo

A romantic interlude during the Q&A session of the after-screening event surprisingly turned out to be the climax of the evening. A male cinephile asked his "long-time admired" actress to be the witness to his marriage proposal.
Having recovered from a short moment of astonishment, Marceau appeared to be in high spirits as she directly stepped down the stage for a closer look at her fan was asking his girlfriend if she wanted to be his wife. Gazing at them, seemingly profoundly moved, she then sang "La Vie En Rose" to the couple as a blessing.
It was not the first time she had performed this, what is arguably the most renowned French song in the world, for Chinese audiences. Five years ago, she once sang the piece with celebrated Chinese singer Liu Huan during the Spring Festival Gala – China's most viewed TV show - as a tribute to the 50 years of diplomatic relations and friendship between China and France.

A 'special connection' to China

Sophie Marceau at the after-screening event during the 9th BJIFF, designed with her quote. /CGTN Photo

Sophie Marceau at the after-screening event during the 9th BJIFF, designed with her quote. /CGTN Photo

Best known in China for her role as a sensitive teenage girl in love in her film debut, 1980's "La Boum", Marceau has become something of a symbol of first love since.
"My favorite piece is still 'La Boum,' especially the scene when she looked back to the German teacher. It is indeed unforgettable, though I still love my girlfriend," a senior college student told CGTN.
"I used to have very little interest in movies, but since I saw Sophie Marceau, I've immediately fallen in love with French films, French culture, everything about France… I also learned French because of her," said a female moviegoer, showing us what was held in her hand – a soundtrack CD of her favorite movie "Fanfan."
"She is internationally famous and always unique. She shows the romance and humor of French people, and also their free spirits," an older fan of Marceau told CGTN.‍
For the Chinese, Marceau is more than a global superstar: She has, to a certain extent, become a symbol of France. Hailed as the "Rose of France," the veteran actress is not only a glam goddess who steals the heart of the Chinese audience but also became the perfect choice for the role of China-France cultural ambassador for her wit and flair. 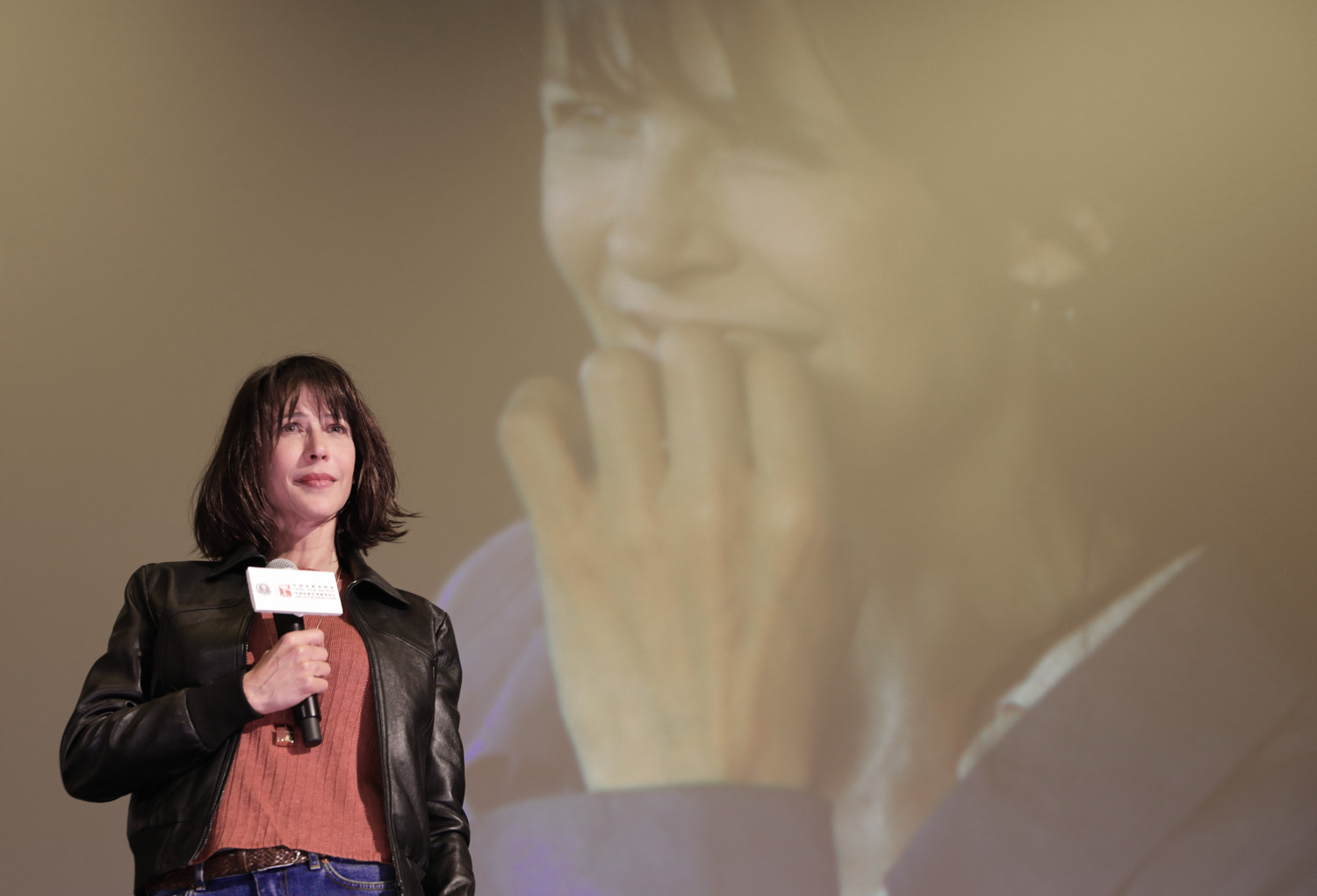 Sophie Marceau talks about her "special connection" to China at the after-screening event at the China Film Archive in Beijing, April 14, 2019. /CGTN Photo

Sophie Marceau talks about her "special connection" to China at the after-screening event at the China Film Archive in Beijing, April 14, 2019. /CGTN Photo

At the Sunday event, Marceau did not fail to mention on several occasions that she shot some parts of her movies in China. When asked why, she shared her special emotional connection with the country.
"I believe in the symbolism of things in general," she answered, noting that "For me, China, Asia, are part of my life since I started my career."
"Since I was 13 years old, I visited Asia a lot, and China even more in the last 20 years. There is so much kindness toward me and loyalty that I have grown to share these types of little moments," said the actress with tears in her eyes.
Marceau participated in the historical drama "Turandot" – a Chinese adaptation of Giacomo Puccini's opera masterpiece, which started filming in last year's springtime.
Talking about the filming experience, she said she felt thrilled being part of it because she "jumped into a completely Chinese production, a totally Chinese story."
She also admitted that it was a story she had always been looking forward to, noting that "It was like I imagined the films here to be, an epic film, in costumes, with a beautiful love story. It was really unbelievable and that was the last film that I made." 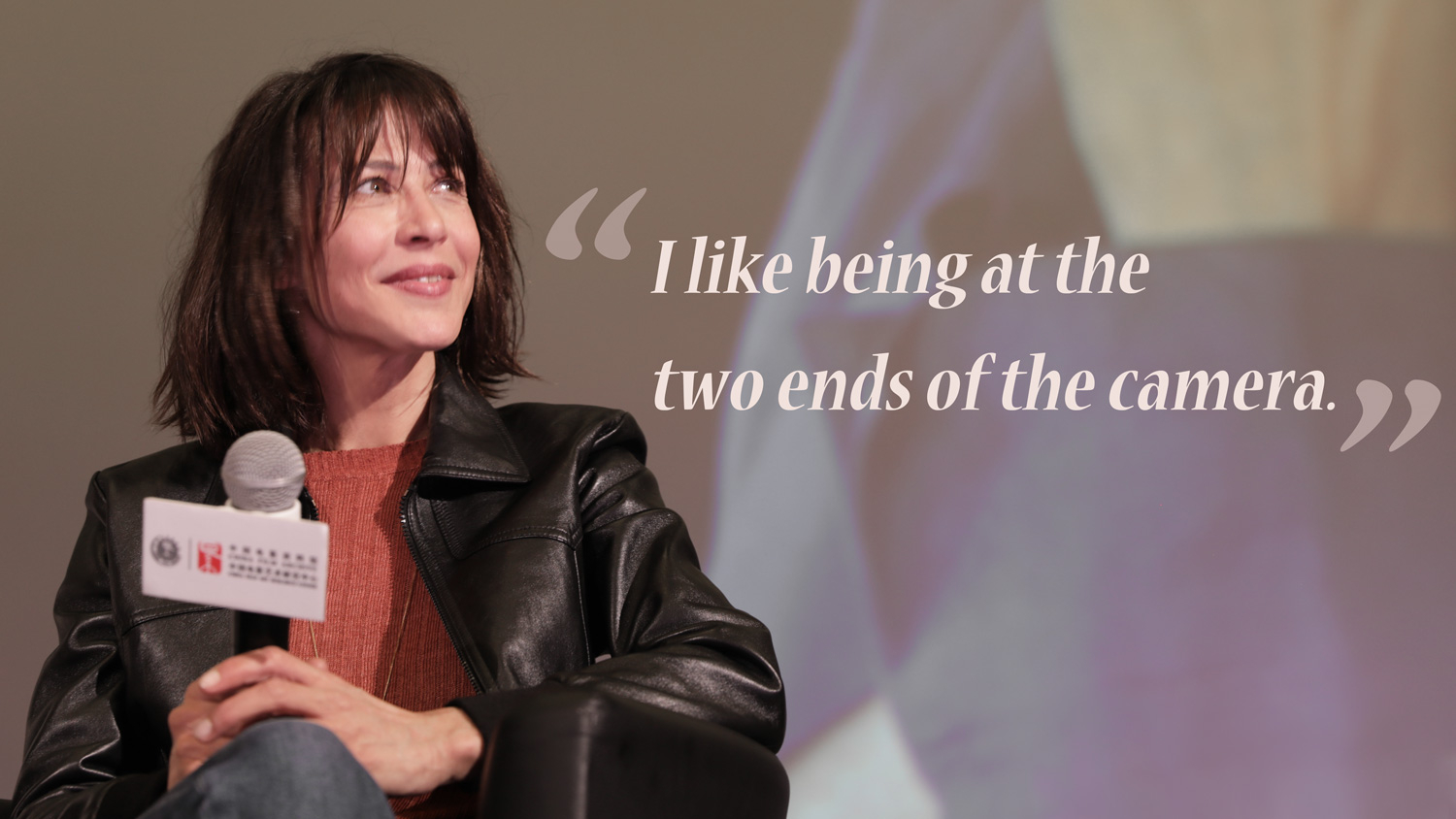 Sophie Marceau at the after-screening event during the 9th BJIFF. /CGTN Photo

Sophie Marceau at the after-screening event during the 9th BJIFF. /CGTN Photo

Her third directorial effort "Mrs. Mills" saw Marceau co-write the screenplay and cast herself as a lonely workaholic publisher obsessed with novels.
The comedy, which was released in France in 2018, follows a "sort of strange" story full of dramatic reversals, depicting how the publisher's initially well-organized life is thrown a curve after the arrival of a new neighbor – an eccentric old American woman played by French actor Pierre Richard.
"The movie lets us have our fantasy without hurting anyone," she said.
About the movie's protagonists, she said they found a bit of craziness, a bit of fantasy, like two kids who will never grow up, noting that she hoped this movie would deliver much energy to the audience, bringing some surprises.

Screenshots of the ratings of part of Marceau's works and sound ratings on Douban.com, China's popular film rating and review site.

Screenshots of the ratings of part of Marceau's works and sound ratings on Douban.com, China's popular film rating and review site.

The Sunday screening marked the Asian debut of the movie, which also concerns the complexity of identity in life.
"I like to play with masks, people who disguise themselves, it's a career also. I like that," said Marceau, adding that "It's a subject that interests me, a change of identity, of character, what we play in the life, who we are really, it's also a bit of that, the mask."
She also revealed that she obtained the inspiration from a famous French actor, who told her that he was extremely eager to perform a female role at a wine party. Also, some classic movies like the 1959 film "Some Like It Hot" starring Marilyn Monroe also gave her some new and creative ideas as well as more imagination.
Marceau also talked about the difference between her roles as director and actor: "It's clear that the direction takes more work and more time. We are in charge of everything; we pick everything. When we are actors, we are more dependent on others," stressing that "I like being at the two ends of the camera." 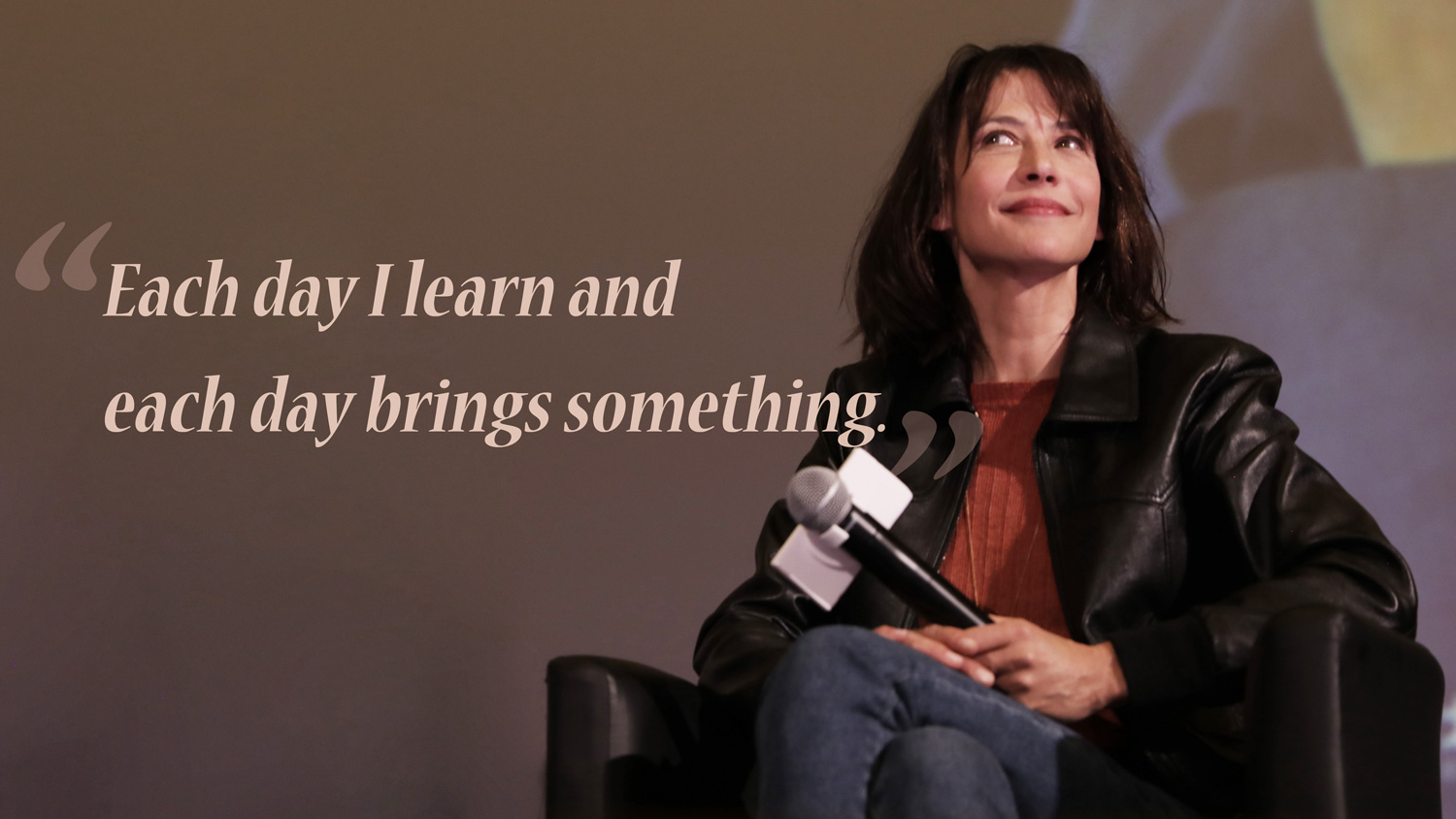 Worldwide movie-goers saw Marceau evolve from the glamorous "Fanfan" in the 1993 romantic comedy to Princess Isabelle in the 1995 war epic "Braveheart," from a sexy Bond girl in the 1999 spy film "The World Is Not Enough" to a fragile wife and mother in the 2007 thriller "Don't Look Back."
Despite appearing in a wide variety of roles, Marceau is also a director, author, and screenwriter. The versatile actress keeps exploring the unknown and showing more potential, which surprises the audience who are succumbed to the charms of her.
When asked if she still have something different to discover in profession an in life, the versatile actress, not surprisingly, answered in the affirmative: "In my profession, yes, I have a lot of things to discover still – I hope. In any case that's what I want, new things, things I haven't done yet, new directors, and different characters from what I've already played."
The film icon said, adding that "Each day I learn and each day brings something."
Although her "La Boum" days may be over, Marceau looked as though she hadn't aged in a bit in the nearly 40 years since the film was released.
Her secret might be hidden in her attitude toward life and time. As she gets older, it gets more important for her to live in the present moment entirely, worrying less about the past and future, she said.
"To live these moments, because it's where everything happens," Marceau concluded.
(Cover image and pictures of quotes designed by Liu Shaozhen; Video by Hong Yaobin)