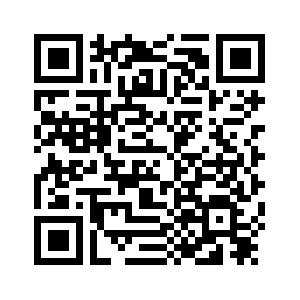 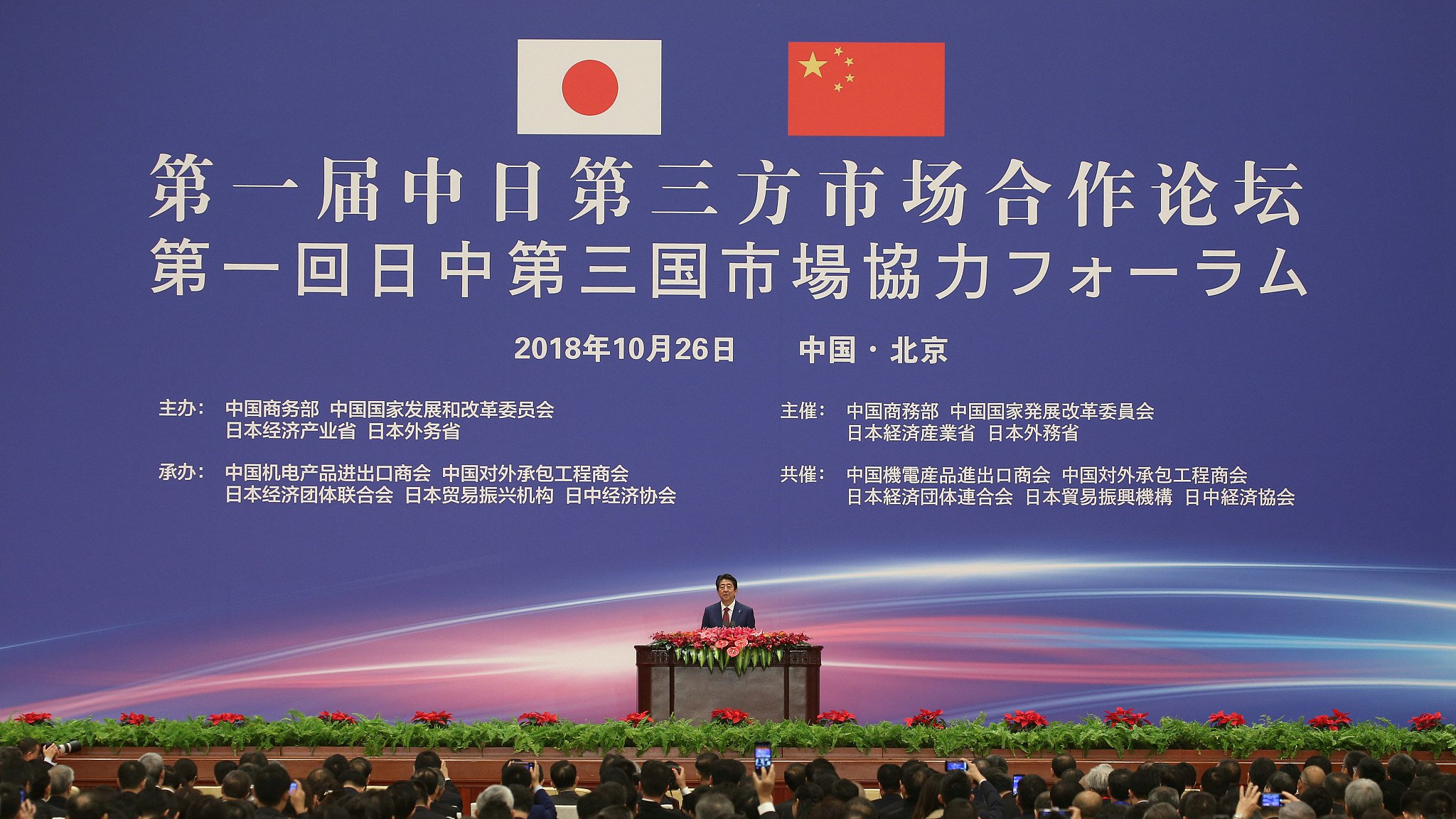 Editor's note: The following is an edited translation of a commentary from the Chinese-language "Commentaries on International Affairs" that was first published by China Plus.
The official visit to China by Japan's Prime Minister Shinzo Abe this week - the first by a Japanese prime minister in seven years - has captured the public imagination in some unexpected ways.
The day Prime Minister Abe arrived in Beijing, China's leading hotpot restaurant chain Haidilao announced its partnership with Japan's electronics giant Panasonic. The two companies will collaborate on a robot restaurant project in Beijing.
Panasonic's Japan-developed robots will deliver hotpot, one of China's most iconic cuisines, and this combination, in its unique way, reflects the positive momentum in the two country's bilateral ties.
The relationship between China and Japan is back on track, but its future trajectory depends on them embracing opportunities for practical cooperation.
The two sides should further solidify their mutual political trust, which has at its foundation the China-Japan Treaty of Peace and Friendship, which turned 40 this year. 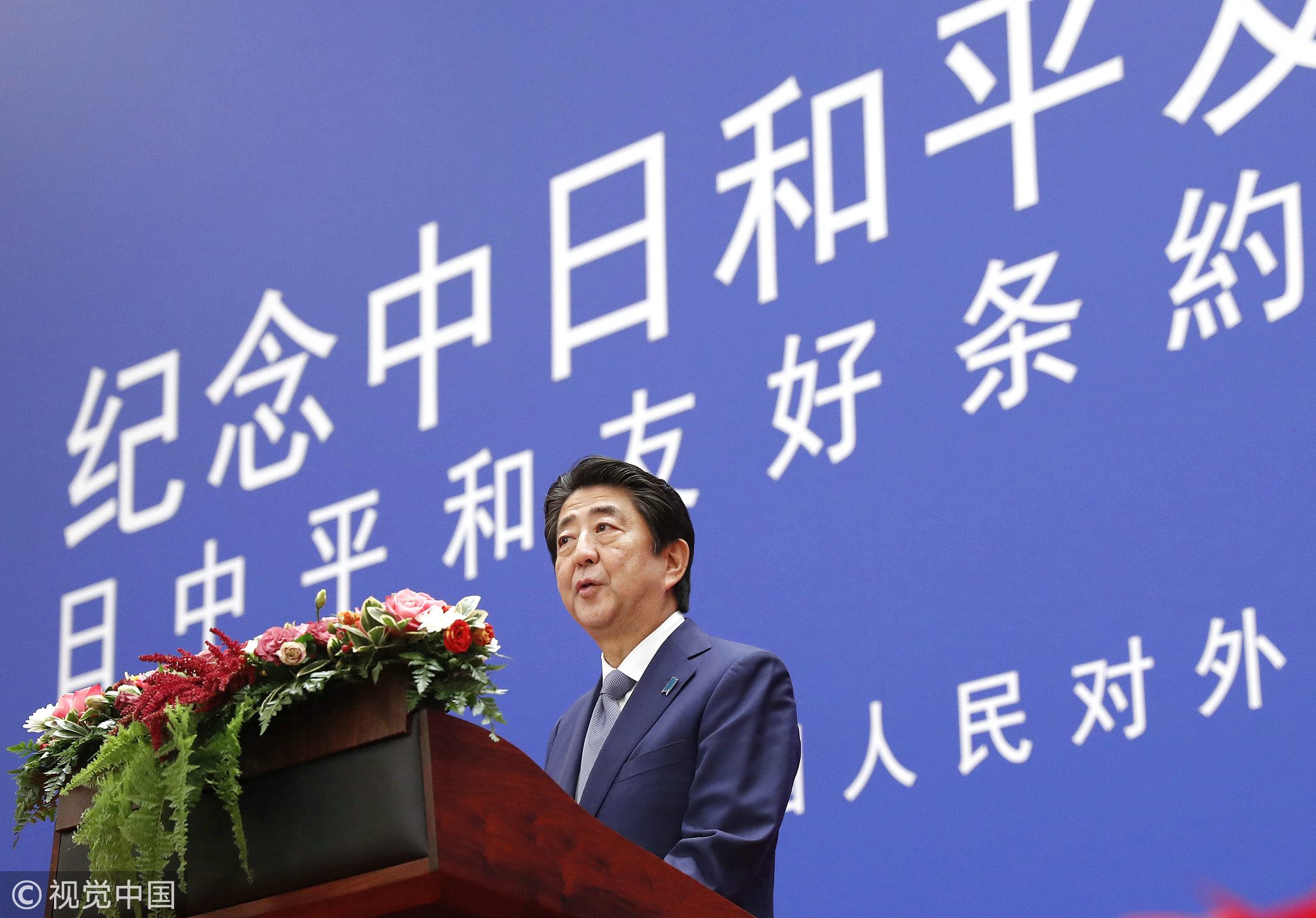 Japanese Prime Minister Shinzo Abe delivers a speech at a reception to celebrate the 40th anniversary of the entry into force of the Japan-China peace and friendship treaty at the Great Hall of the People in Beijing, China, Oct. 25, 2018./ VCG Photo

Japanese Prime Minister Shinzo Abe delivers a speech at a reception to celebrate the 40th anniversary of the entry into force of the Japan-China peace and friendship treaty at the Great Hall of the People in Beijing, China, Oct. 25, 2018./ VCG Photo

During his visit to Beijing this week, Prime Minister Abe called on the two signatories to adhere to the treaty, and Chinese Premier Li Keqiang spoke of the treaty's role in providing the principles for peaceful coexistence and long-lasting friendship between the two countries.
Mutual trust is the foundation of state relations, and is especially important for China and Japan, which have gone to war several times throughout their history. Looking back at the past 40 years, the two countries have seen their ties swing back and forth from being fairly positive to extremely negative.
During his meeting with Prime Minister Abe, Chinese President Xi Jinping emphasized that "thorough strategic communication should be carried out, and dialogue mechanisms between the two countries should play a greater role through diverse channels at multiple-levels, so that each side can precisely grasp the other's development and strategic intentions."
President Xi also called on the two sides to effectively act as partners rather than opponents, and facilitate positive interactions that deepen political trust. 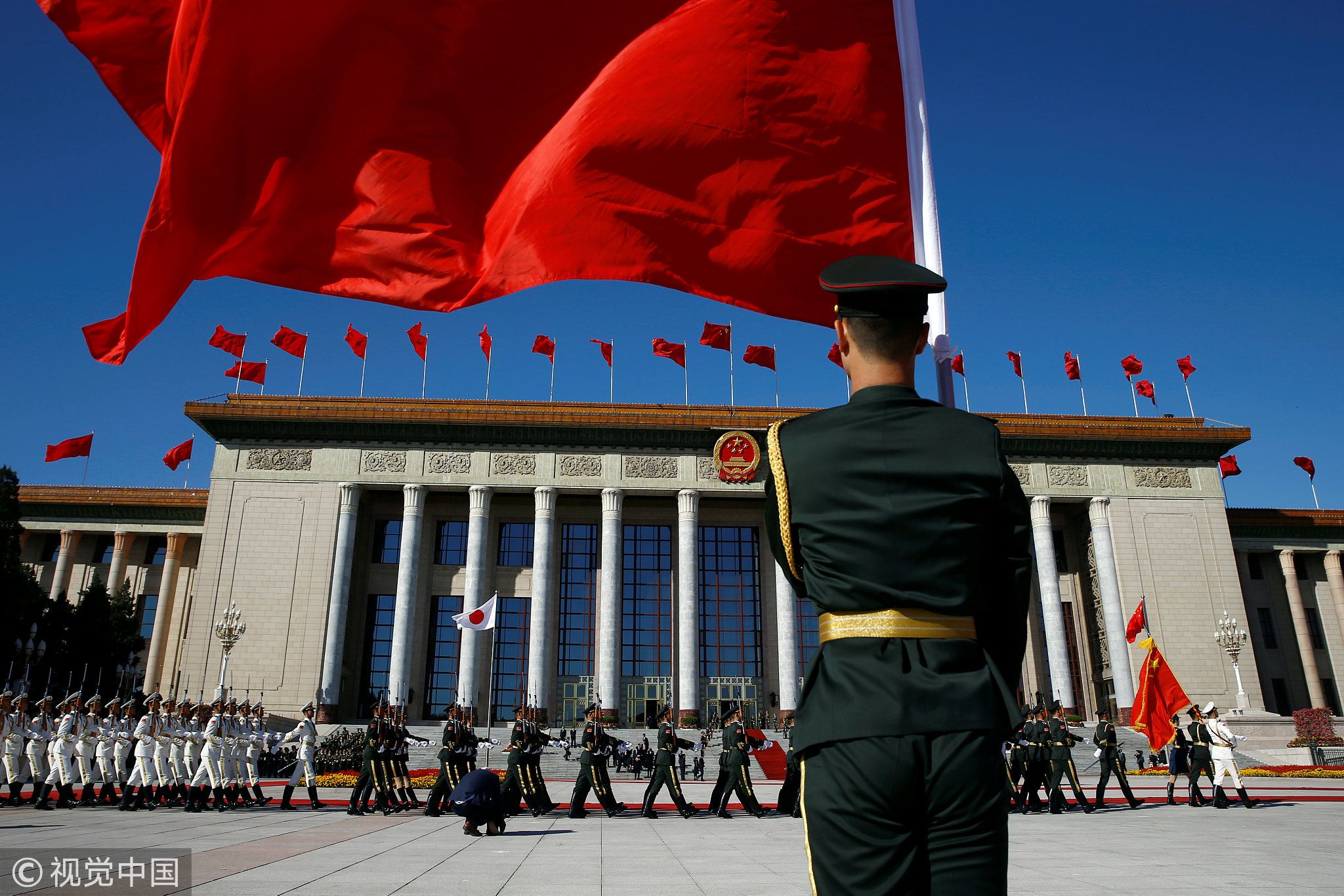 Members of the honor guard march outside the Great Hall of the People before a welcome ceremony for Japanese Prime Minister Shinzo Abe in Beijing, China, October 26, 2018./ VCG Photo

Members of the honor guard march outside the Great Hall of the People before a welcome ceremony for Japanese Prime Minister Shinzo Abe in Beijing, China, October 26, 2018./ VCG Photo

China and Japan should also explore opportunities to work together for their mutual benefit. For example, China and Japan reached a consensus regarding cooperation in third-party markets during Premier Li Keqiang's visit to Japan back in May.
Prime Minister Abe admitted that there had been occasions where bidders from the two countries resorted to heated competition on the cost of infrastructure projects in other countries.
Neither side benefited from these intense bidding wars, and cooperation should take the place of competition when similar circumstances arise in the future.
And the two economies are, after all, highly complementary, which provides a good practical foundation for cooperation in third-party markets. This is why more than 1,500 guests attended the first ever forum on China-Japan third-party market cooperation in Beijing during Prime Minister Abe's visit, where the China-Japan Industrial Cooperation Fund was established.
The fund is expected to raise one billion US dollars to support sectors including manufacturing, telecommunications, media, and healthcare in China, Japan, and also in third-party countries. Prime Minister Abe noted that Japan has already been a beneficiary of China's robust economy. 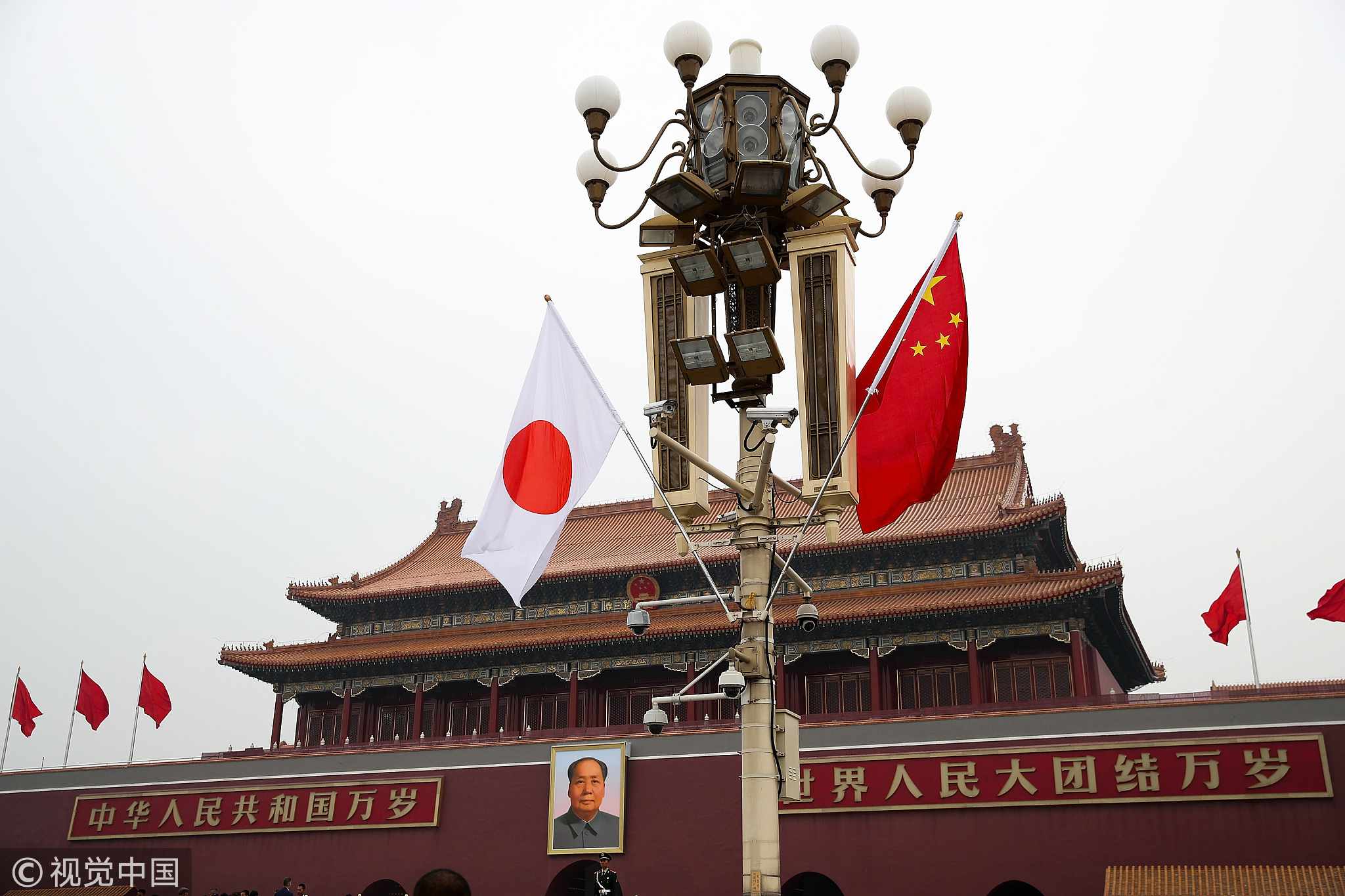 This is backed up by investment figures, which show that Japanese investment in China has exceeded 100 billion US dollars, and some 30,000 local branches of Japanese enterprises have opened in China.
And finally, people-to-people exchanges should be strengthened, since they have lagged behind the development of economic ties. A recent public opinion poll said that 42 percent of respondents in China had a favorable impression of Japan, but only 13 percent of people in Japan had a favorable impression of China.
An opinion piece in the Mainichi Shimbun argued that "Chinese people have grown fonder of Japan than ever before, the highest point in 14 years, but this improvement is not mutual" and that a gap remained in how people from the two sides perceive each other.
Improving public perception is an important way to enhance practical cooperation, and young people have a major part to play. This is why leaders in the two countries have designated 2019 as a year to promote youth exchanges.
And the two countries will take advantage of the opportunities provided by the 2020 Tokyo Olympic Games and the 2022 Beijing Winter Olympic Games to enhance people-to-people exchanges.
If the two countries are able to embrace the opportunities for practical, concrete actions that will improve their relationship, the world's second and third-largest economies can be an indispensable force in Asia - and they can be a force for good in a world that is crying out for greater peace and stability.
(Cover Photo: Japanese Prime Minister Shinzo Abe, on the podium, speaks at a forum to explore market cooperation between Japan and China in third countries in Beijing, China, Friday, Oct. 26, 2018./ VCG Photo)
(If you want to contribute and have specific expertise, contact us at opinions@cgtn.com.)