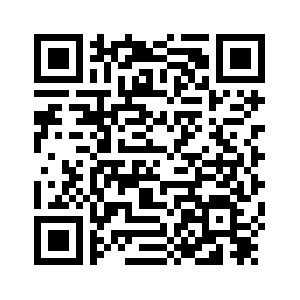 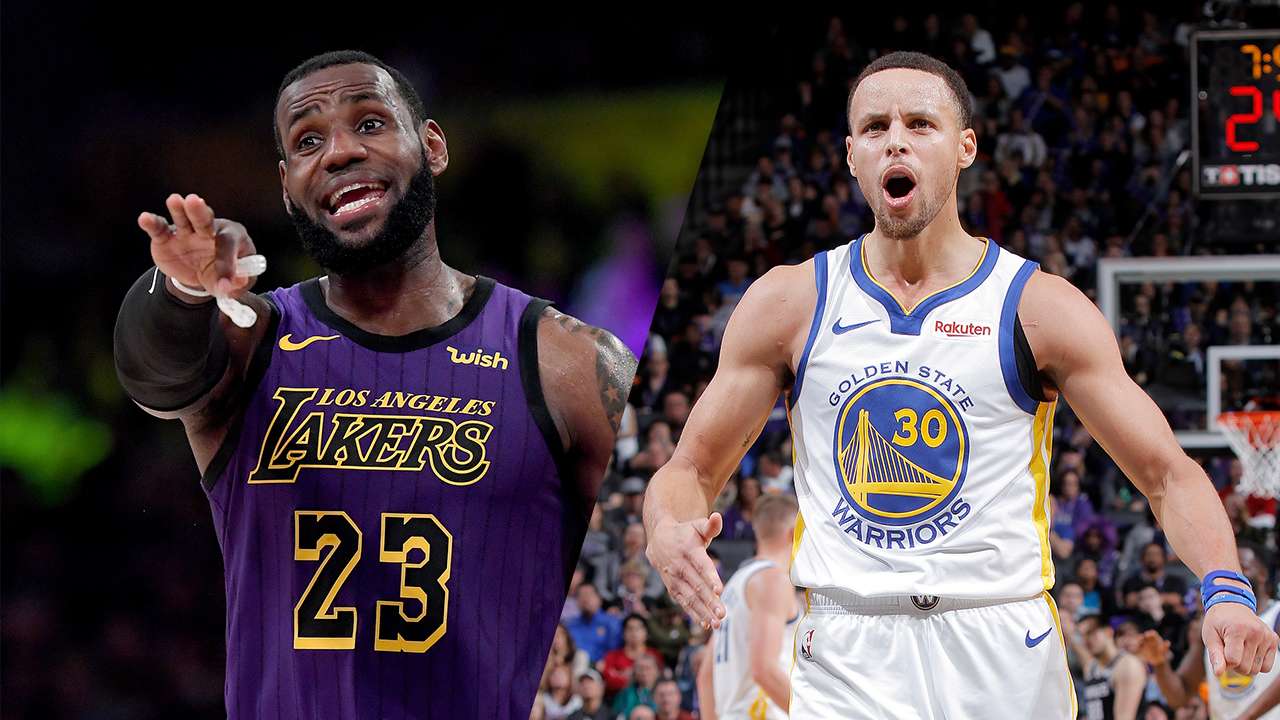 The 2018-19 NBA regular season finished Saturday with eight games.
Stephen Curry of the Golden State Warriors hit 10 three-pointers to not only help GSW defeat the Sacramento Kings 127-123, but also surpass Kyle Korver (2,272) to reach No.4 in NBA career 3-pt scoring. The other big news was that the Los Angeles Lakers and the Brooklyn Nets were reportedly picked for the 2019 NBA China Game, meaning that LeBron James will play the game for the third time, according to Tencent Sports. 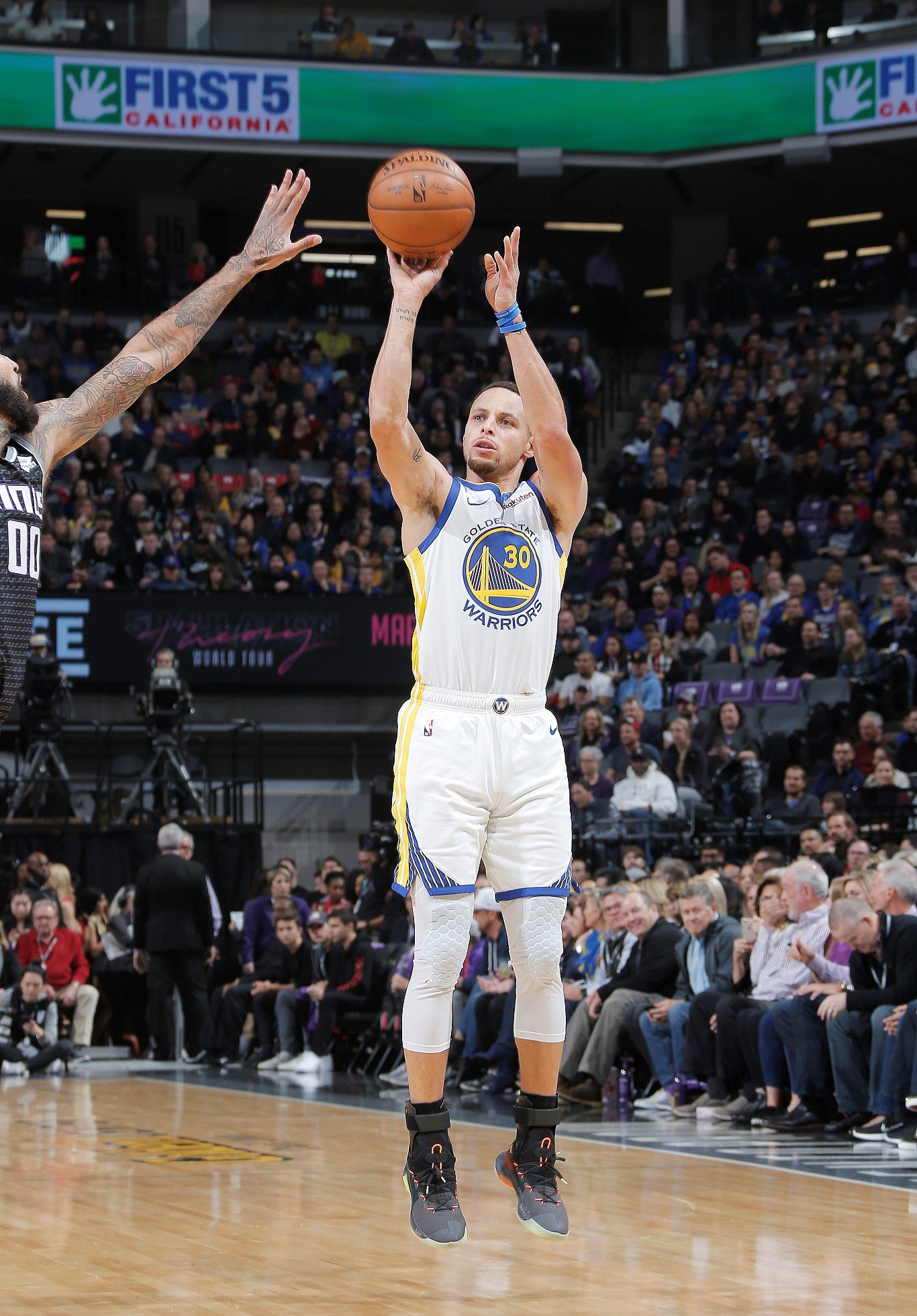 Stephen Curry of the Golden State Warriors shoots a three-pointer in the game against the Sacramento Kings, January 5, 2019. /VCG Photo

Stephen Curry of the Golden State Warriors shoots a three-pointer in the game against the Sacramento Kings, January 5, 2019. /VCG Photo

Thanks to his 10 three-pointers made, Curry scored 42 points, the court's highest, for Golden State. Kevin Durant put down 29 points and the most nine assists of both teams. Klay Thompson also dropped 20 points. All three enjoyed field goal rates of over 50 percent.
Sacramento's Buddy Hield scored the team's highest 32 points by making eight three pointers, which was both his career record and the second best 3-pt shooting performance in the franchise history. Justin Jackson from the bench dropped 28 points, a career high, including 5/7 for three-pointers. 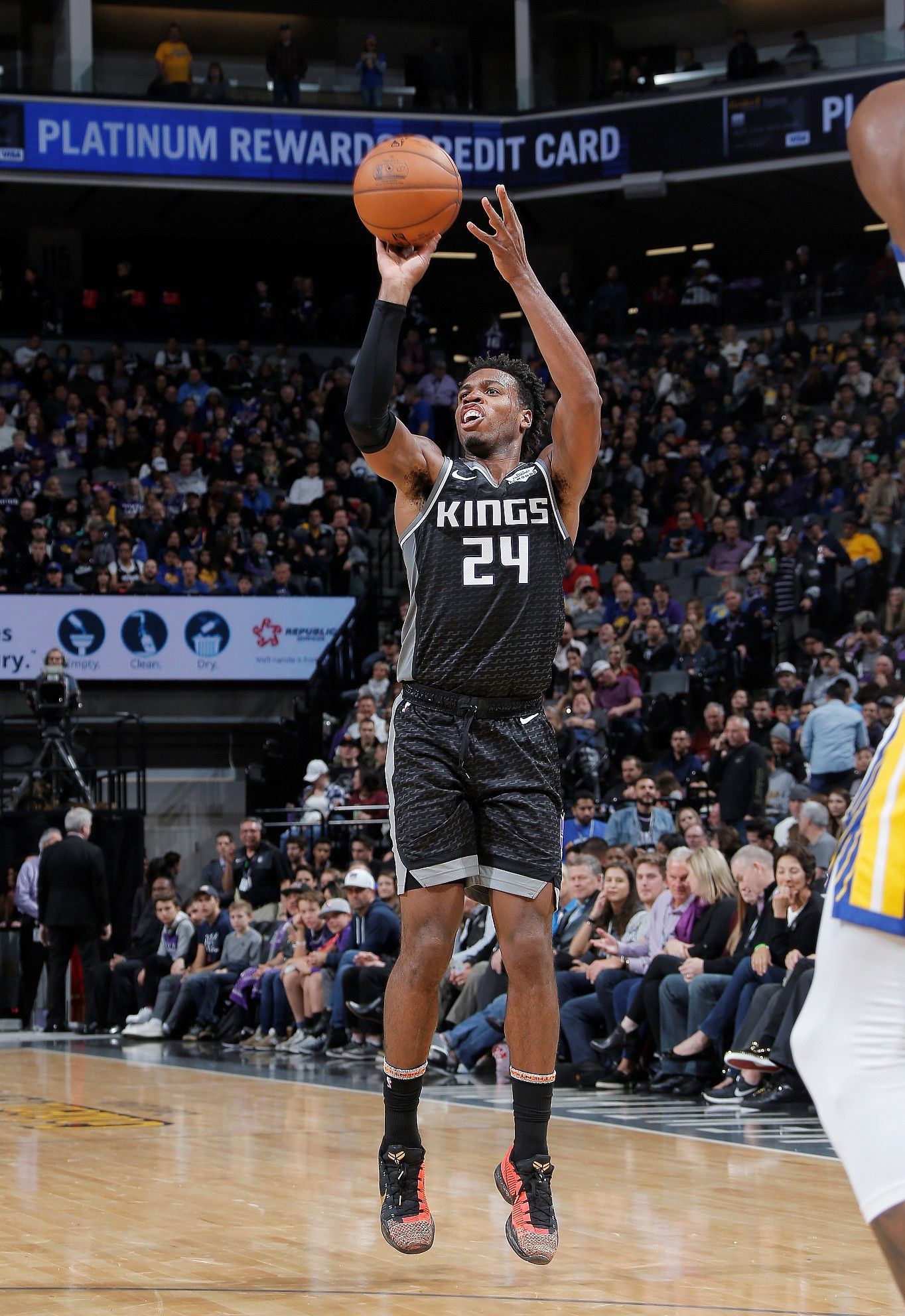 Buddy Hield of the Sacramento Kings shoots a three-pointer in the game against the Golden State Warriors on January 5, 2019. /VCG Photo

Buddy Hield of the Sacramento Kings shoots a three-pointer in the game against the Golden State Warriors on January 5, 2019. /VCG Photo

The Warriors and the Kings presented a 3-pt spectacular at the Golden 1 Center. Though GSW made a good start by sinking eight out of 11 attempts from the 3-pt line in the first quarter and led 43-29, the Kings had no plan to give up but responded a 40-27 in the second quarter. Golden State then continued their recent "sloppy third-quarter attitude" by watching Sacramento follow with another 34-26 to take the lead (103-96).
Curry became savior to the Warriors in the last quarter by dropping 20 points. His four shots made from the 3-pt line plus two by Durant helped the Warriors regain the lead and stand up to Sacramento's counterattacks before claiming victory. 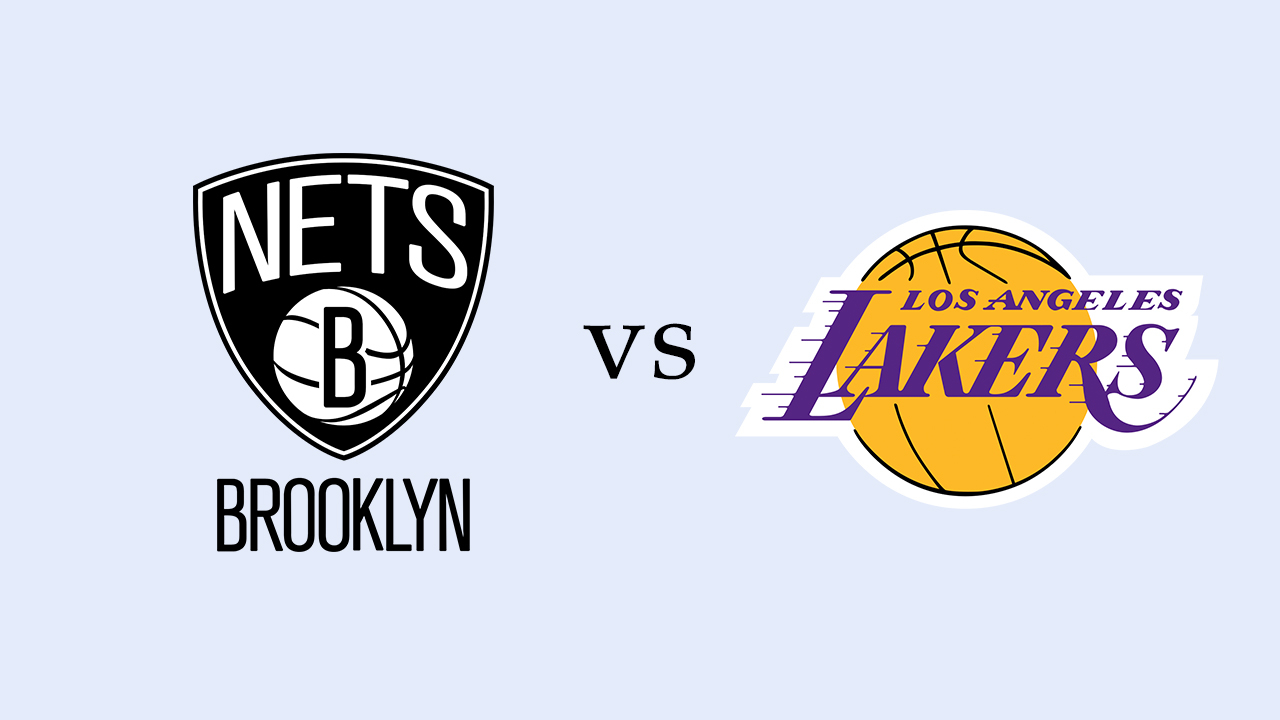 The Brooklyn Nets and the Los Angeles Lakers will play the 2019 NBA China Game, according to Tencent Sports. /VCG Photo

The Brooklyn Nets and the Los Angeles Lakers will play the 2019 NBA China Game, according to Tencent Sports. /VCG Photo

According to Shen Yang of Tencent Sports, the NBA has decided to have the Lakers and the Nets play the 2019 China Game which will happen on October 10 in Shanghai and October 12 in Shenzhen.
The league has yet to officially announce its selection.
Both teams have played the China Game before. The Lakers in 2013 came to China and played two games with the Golden State Warriors. The Nets first visited China in 2010 when they were still called the New Jersey Nets to play against the Rockets. Then in 2014, as the team moved to Brooklyn, they were joined by the Kings for the China Game again. 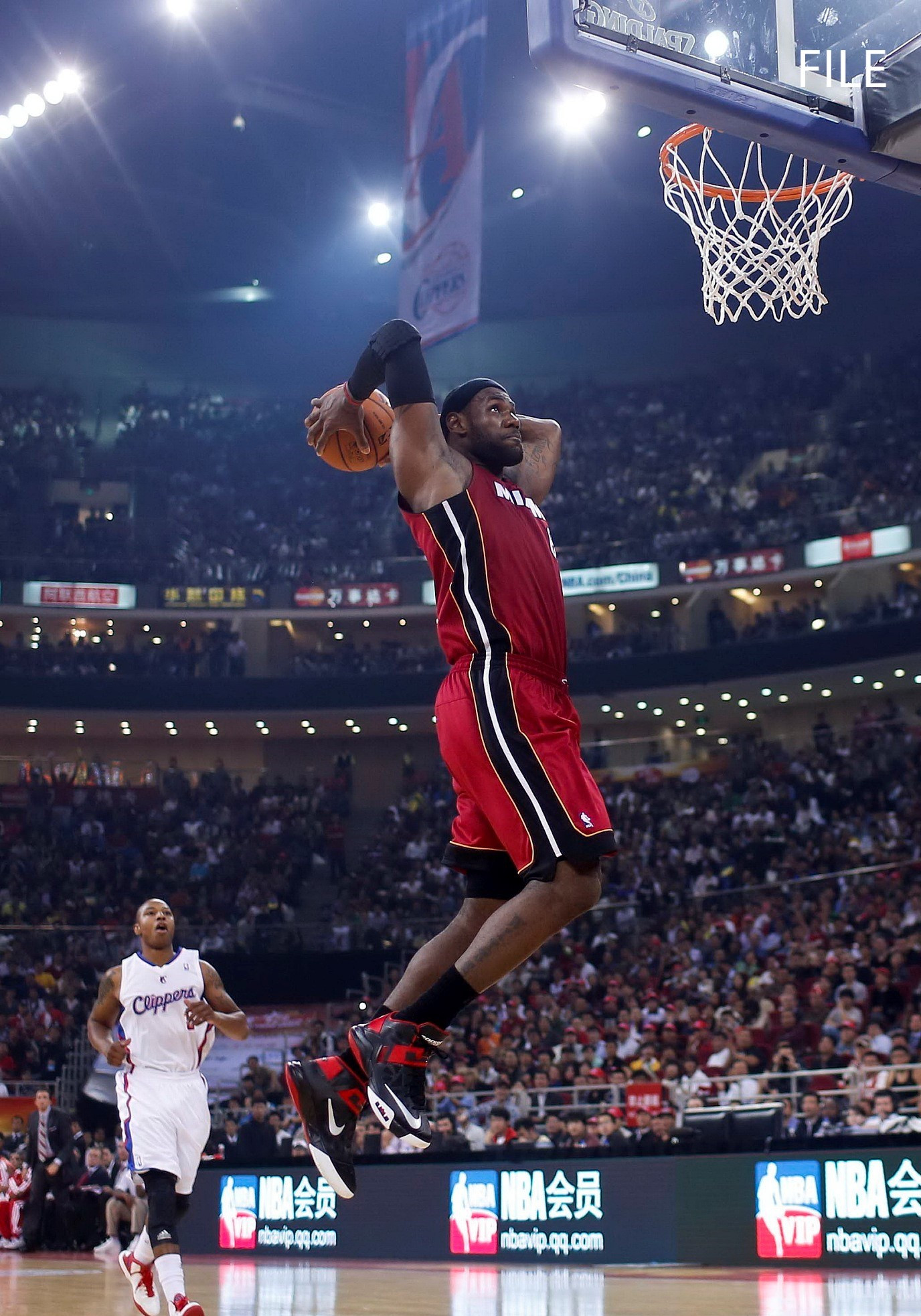 LeBron James (R) of the Miami Heat dunks in the 2012 NBA China Game against the Los Angeles Clippers. /VCG Photo

LeBron James (R) of the Miami Heat dunks in the 2012 NBA China Game against the Los Angeles Clippers. /VCG Photo

As for LeBron James, it will be his third time taking part in the event. Back in 2007, he came to China with the Cleveland Cavaliers to play against the Orlando Magic led by Dwight Howard in two games in Shanghai and Macao. Then in 2012 James came with the Miami Heat to play against the Los Angeles Clippers in Beijing and Shanghai. 2019 will be his third NBA China Game, which will also make him the second player to attend three China Games on behalf of three different teams, after his teammate Lance Stephenson (Indiana Pacers, Los Angeles Clippers and New Orleans Pelicans).
The 2019 event will be the 13th NBA China Game. It started in 2004 between the Rockets and the Kings when Yao Ming brought the first huge upsurge of NBA popularity to the country. Sacramento even gave Chinese player Liu Wei a training camp contract to add fun to the event. 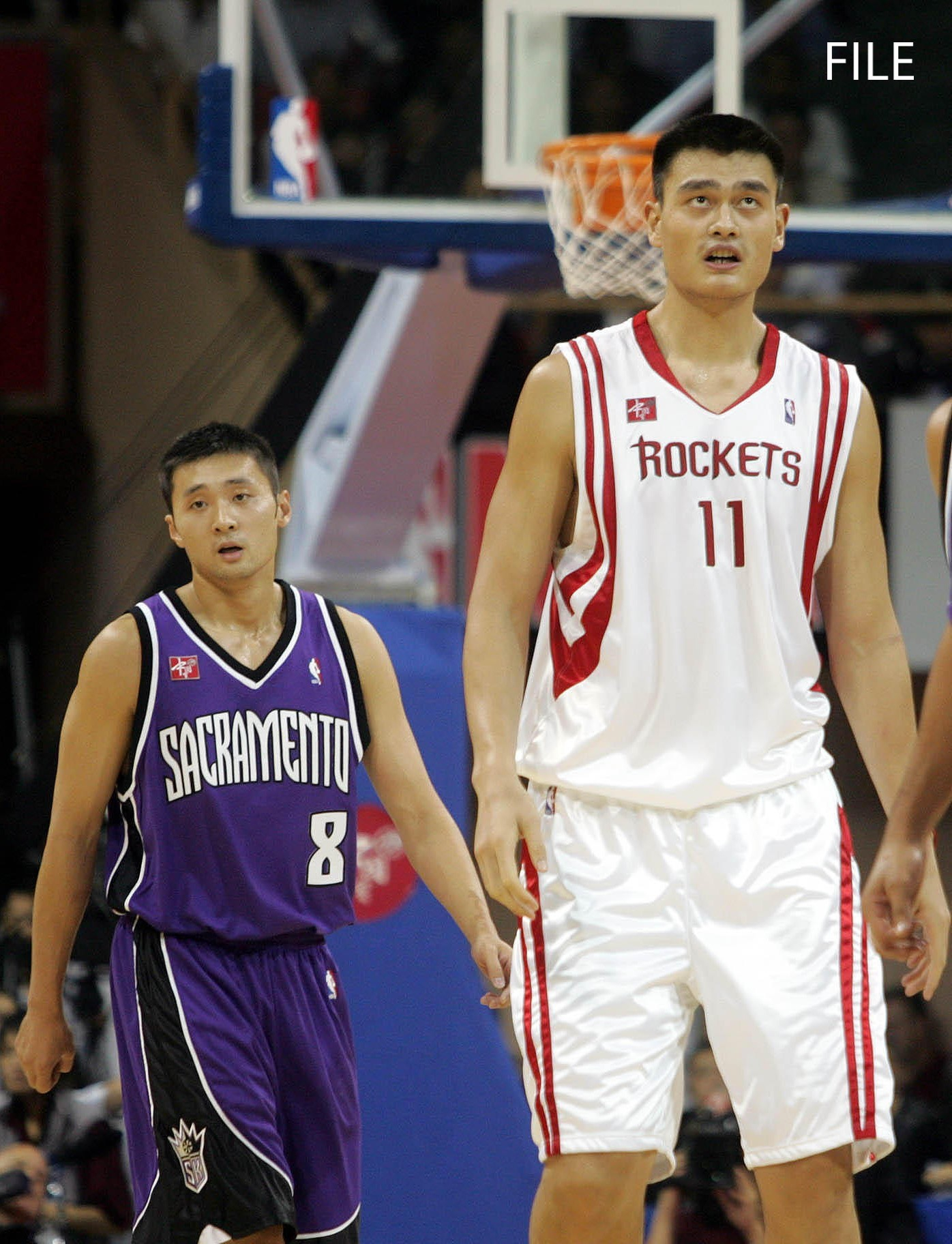 Then starting from 2007, the China Game became an annual event of the league and has been attended by 17 teams in total. Though it was only part of the pre-season games, the NBA China Game had its own highlights including the Chinese derby between Yao Ming and Liu Wei in 2004, the star confrontation between James and Howard in 2007 and the 45-point-night of Carmelo Anthony in 2009.
According to Tencent Sports, the teams for the China Games are usually selected in January of the previous year before the official announcement in March. The league will not only seek consent of the selected teams, but also do a lot of math work in benefits and expenses, which will be assumed by NBA China.
Other games on Saturday included: (away teams come first)
Charlotte Hornets 110-123 Denver Nuggets
Utah Jazz 110-105 Detroit Pistons
Dallas Mavericks 100-106 Philadelphia 76ers
New Orleans Pelicans 133-98 Cleveland Cavaliers
Toronto Raptors 123-116 Milwaukee Bucks
Memphis Grizzlies 88-108 San Antonio Spurs
Houston Rockets 101-110 Portland Trail Blazers