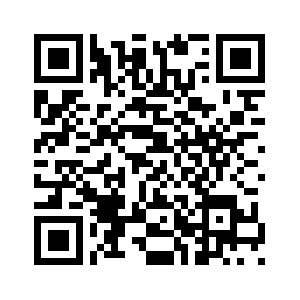 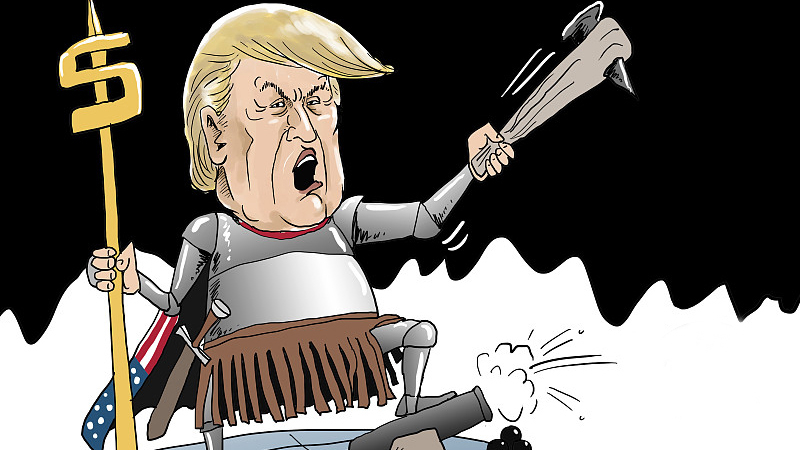 Editor's Note: Dr. John Gong is a research fellow at Charhar Institute and professor at the University of International Business and Economics. The article reflects the author's opinions, and not necessarily the views of CGTN.
Bob Woodward's upcoming book about US President Donald Trump confirms something that the Washington punditry community has already suspected for some time - it paints a gloomy picture of the White House terming it as chaotic, dysfunctional and ill-prepared, that Trump used to describe as a "fine-tuned machine". Here we have an angry and boorish president who sometimes appears to be deranged megalomania.
He is wielding the highest power of the most powerful country in the world, making some of the most important decisions having profound worldwide implications. The scary scene used to be only available in science fictions. Now it is the ultimate reality show unfolding in the White House. 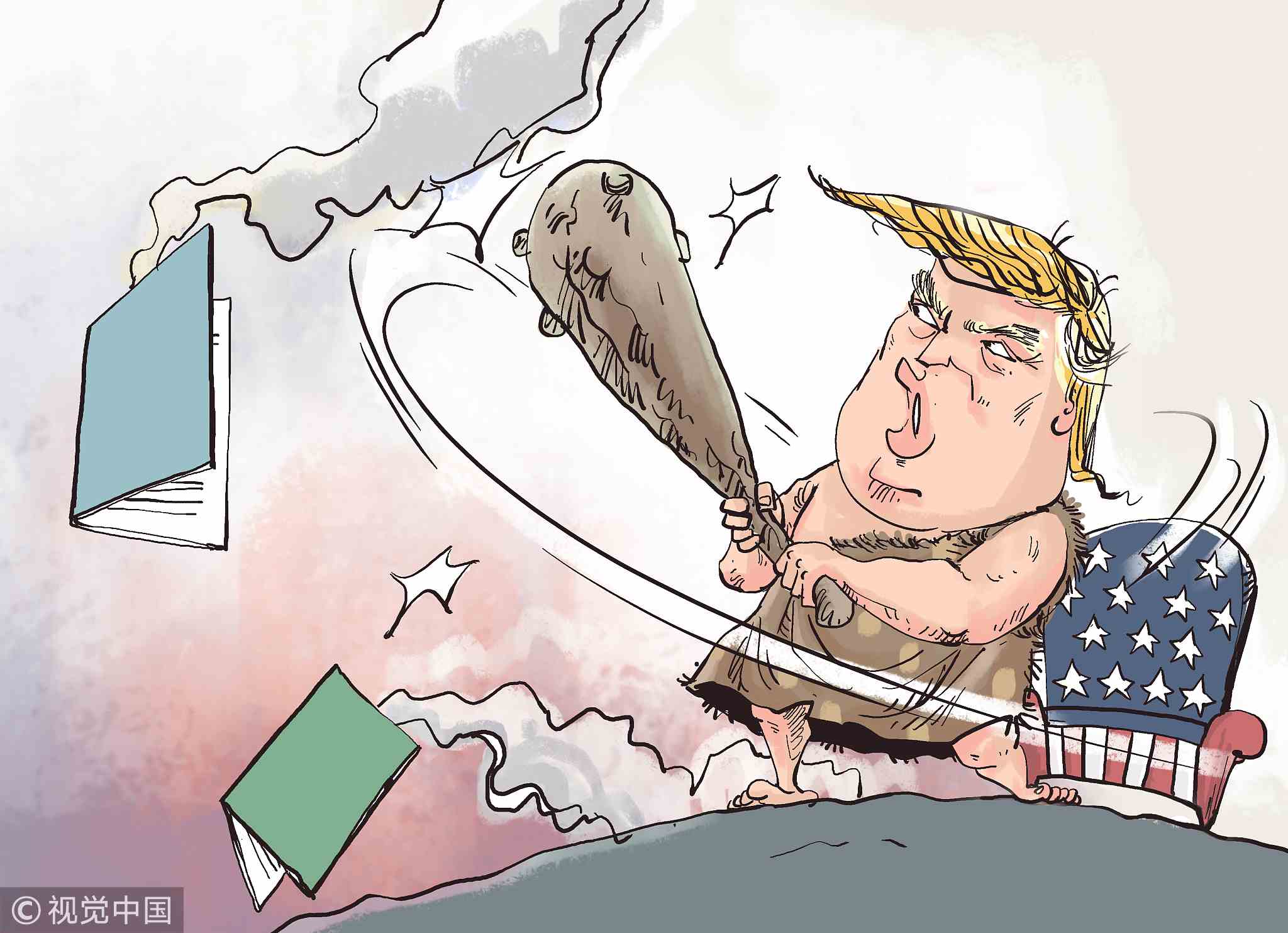 I would like to trace out some clues from Woodward's book and the transcript of his phone conversation with Trump a few days ago, as to what may be in Trump's mind regarding the ongoing trade war with China. Here are some excerpts from Washington Post's report followed by my comments.
"In the fall of 2017, as Trump intensified a war of words with Kim Jong Un, nicknaming North Korea's dictator 'Little Rocket Man' in a speech at the United Nations, aides worried the president might be provoking Kim. But, Woodward writes, Trump told Porter that he saw the situation as a contest of wills: 'This is all about leader versus leader. Man versus man. Me versus Kim.'"
"Trump told Commerce Secretary Wilbur Ross, a wealthy investor eight years his senior: 'I don't trust you. I don't want you doing any more negotiations. . . . You're past your prime.'"
Could this be referring to Wilbur Ross' trip to Beijing in the first week of June? It was reported that the two sides reached an agreement. But then after Ross returned to Washington, the news came that Trump killed the deal. It is clear to me that the Art of the Deal has to be from him, personally! (By the way, that book was written by ghostwriter Tony Schwartz.) 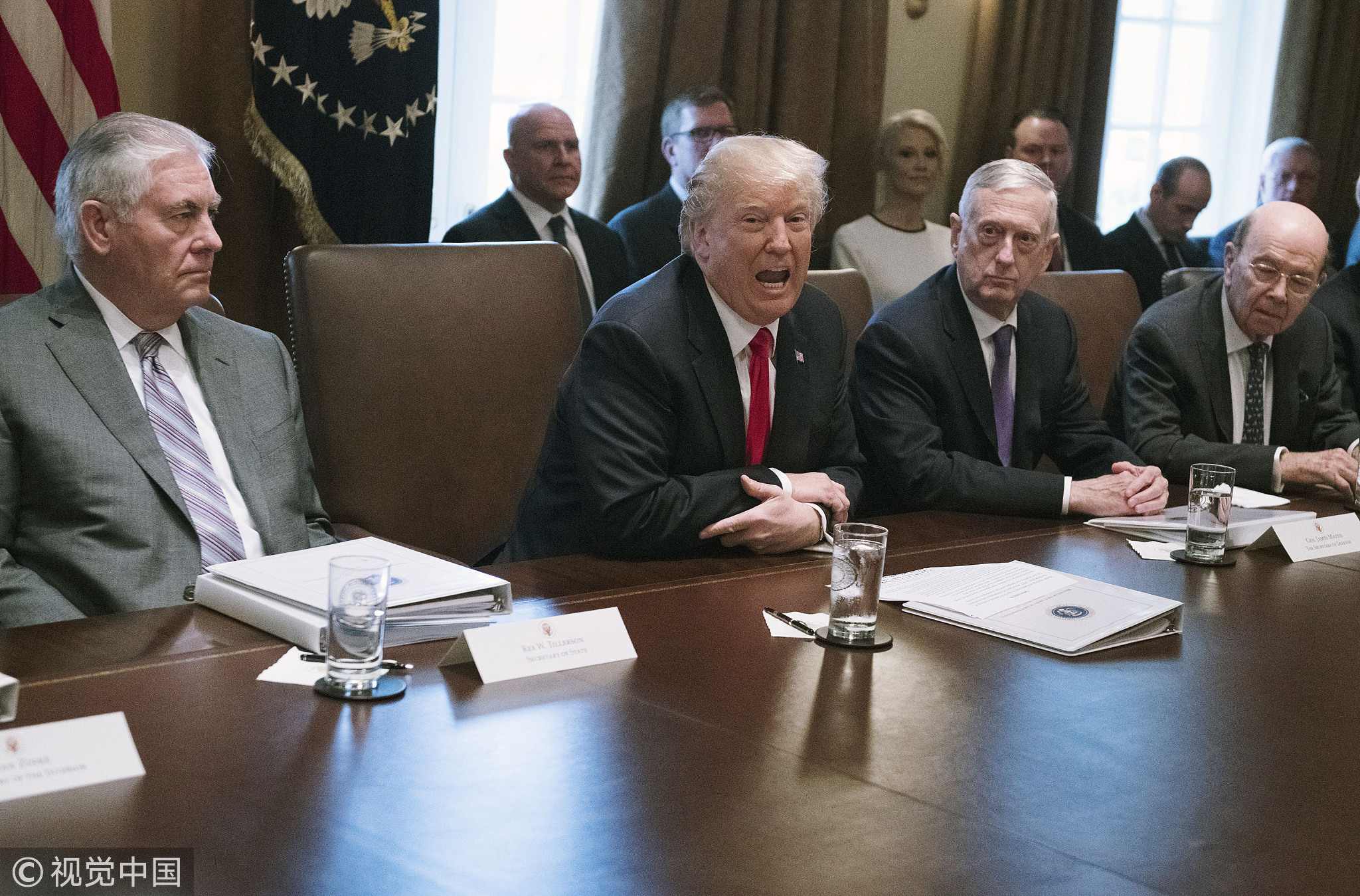 US President Donald Trump, center, speaks while Rex Tillerson, US Secretary of State, left, Jim Mattis, US Secretary of Defense, second right, and Wilbur Ross, US commerce secretary, listen during a cabinet meeting at the White House in Washington, DC, US, on Wednesday, Jan. 10, 2018. /VCG Photo

US President Donald Trump, center, speaks while Rex Tillerson, US Secretary of State, left, Jim Mattis, US Secretary of Defense, second right, and Wilbur Ross, US commerce secretary, listen during a cabinet meeting at the White House in Washington, DC, US, on Wednesday, Jan. 10, 2018. /VCG Photo

During a phone conversation with Woodward, Trump said, "We're doing better economically just about than at any time. We're doing better on unemployment maybe than ever... We're having a lot of - a lot of companies are moving back into our country, which would've been unheard of two years ago." Here we can confirm that he buys into Peter Navarro's theory of whipping Corporate America, especially its manufacturing, back to the US.
Later in that conversation, he said, "I mean, you do know I'm doing a great job for the country. You do know that NATO now is going to pay billions and billions of dollars more, as an example, than anybody thought possible, that other presidents were unable to get more? And it was heading downward. You do know all of the things I've done and things that I'm doing? I'm in the process of making some of the greatest trade deals ever to be made. You do understand that stuff? I mean, I hope."
Here is the good news he is talking about making a trade deal potentially with China. About the part about NATO, this guy loves money. The deal will be about money, billions and billions of dollars.
Putting the above together, we have a better picture. From Trump's perspective, this trade war is about money and jobs.
I would have bet that he would steal the document Trump will sign next week regarding the tariffs on 200 billion US dollars worth of Chinese exports. This is because:
"According to Woodward, Cohn 'stole a letter off Trump's desk' that the president was intending to sign to formally withdraw the United States from a trade agreement with South Korea. Cohn later told an associate that he removed the letter to protect national security and that Trump did not notice that it was missing."
(If you want to contribute and have specific expertise, please contact us at opinions@cgtn.com.)