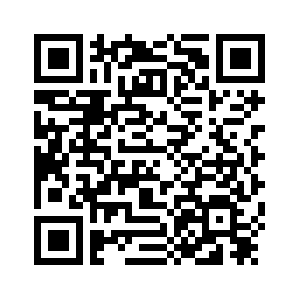 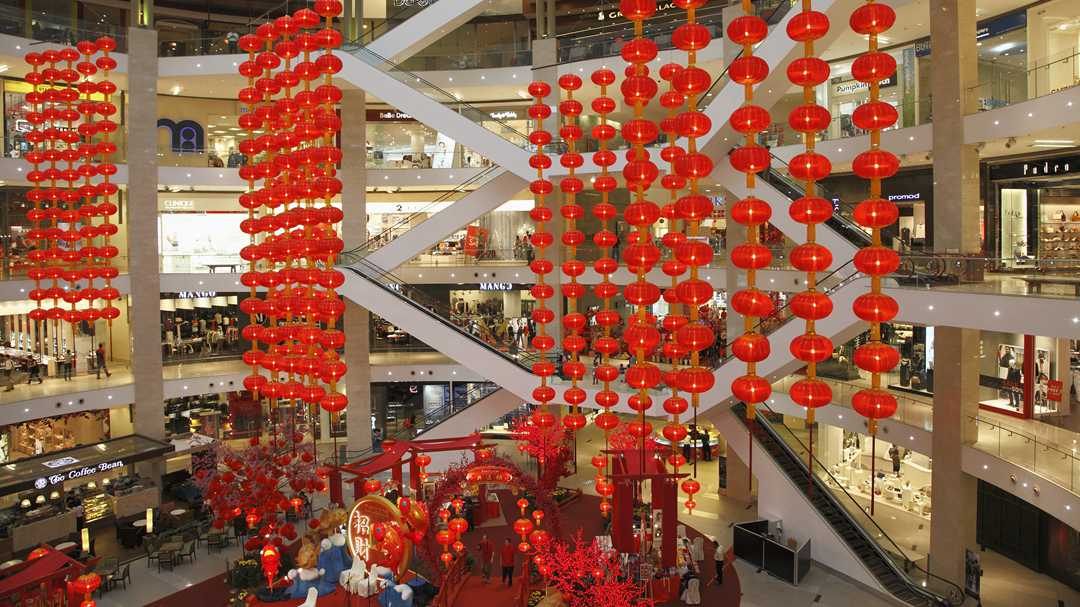 The Spring Festival holiday in 2019 saw stable growth in domestic and overseas consumption, according to statistics released by the Ministry of Commerce (MOFCOM) Sunday.
Retail and catering companies in China made total sales of over one trillion yuan (about 148.37 billion U.S. dollars) during the week-long holiday that ended Sunday, setting a new record and marking an 8.5 percent growth year-on-year, according to MOFCOM. 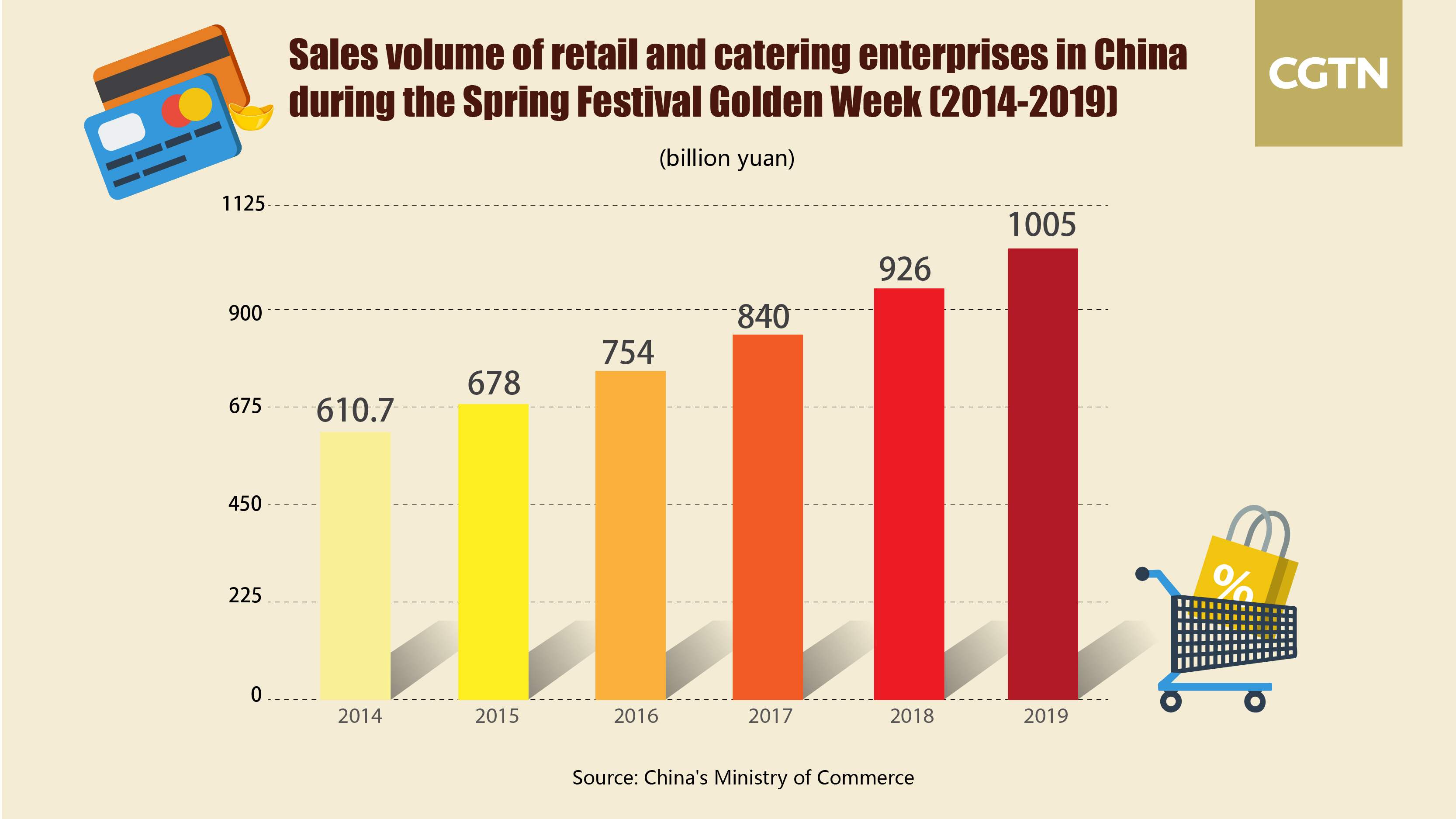 Sales volume of retail and catering companies in China during Spring Festival holiday from 2014 to 2019. /CGTN Photo

Sales volume of retail and catering companies in China during Spring Festival holiday from 2014 to 2019. /CGTN Photo

Sales for catering companies in Beijing grew 10 percent year-on-year. Many catering companies and e-commerce platforms launched delivery services for the Spring Festival family reunion dinner or dispatched cooks to prepare dinner in customers' houses. One food delivery platform saw a 107-percent increase in orders for reunion dinners, according to official data.
Consumers favor shopping centers that integrate shopping, catering, entertainment and other functions. Sales of seven shopping centers and outlets monitored in Shanghai increased by more than 20 percent year-on-year.
They also paid more attention to product quality when buying things, with the sales of organic food, smart home appliances and new electronic devices seeing fast expansion, the ministry said.
Online sales also maintained strong momentum during the period. Chinese e-commerce giant JD.com reported robust sales from February 3 to 8, with sales increasing 42.7 percent year-on-year. Smartphones, computers and home appliances were the top three items on JD.com in terms of sales value.
"The consumption level during the Chinese New Year is probably another evidence that the service sector of the Chinese economy is still pretty robust at the moment, despite manufacturing activities slowing down," said Jimmy Zhu, chief strategist of Fullerton Market.
03:06 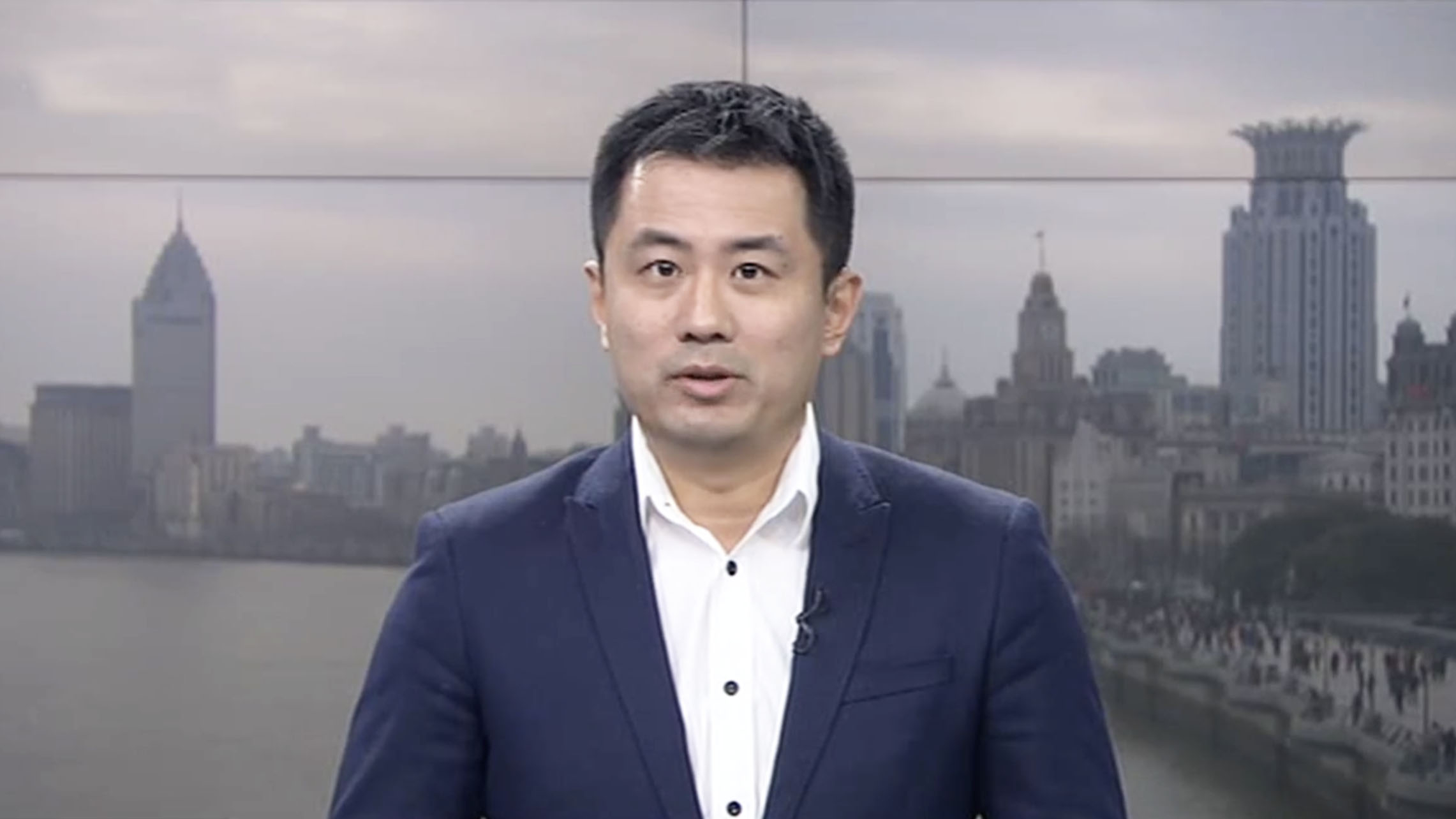 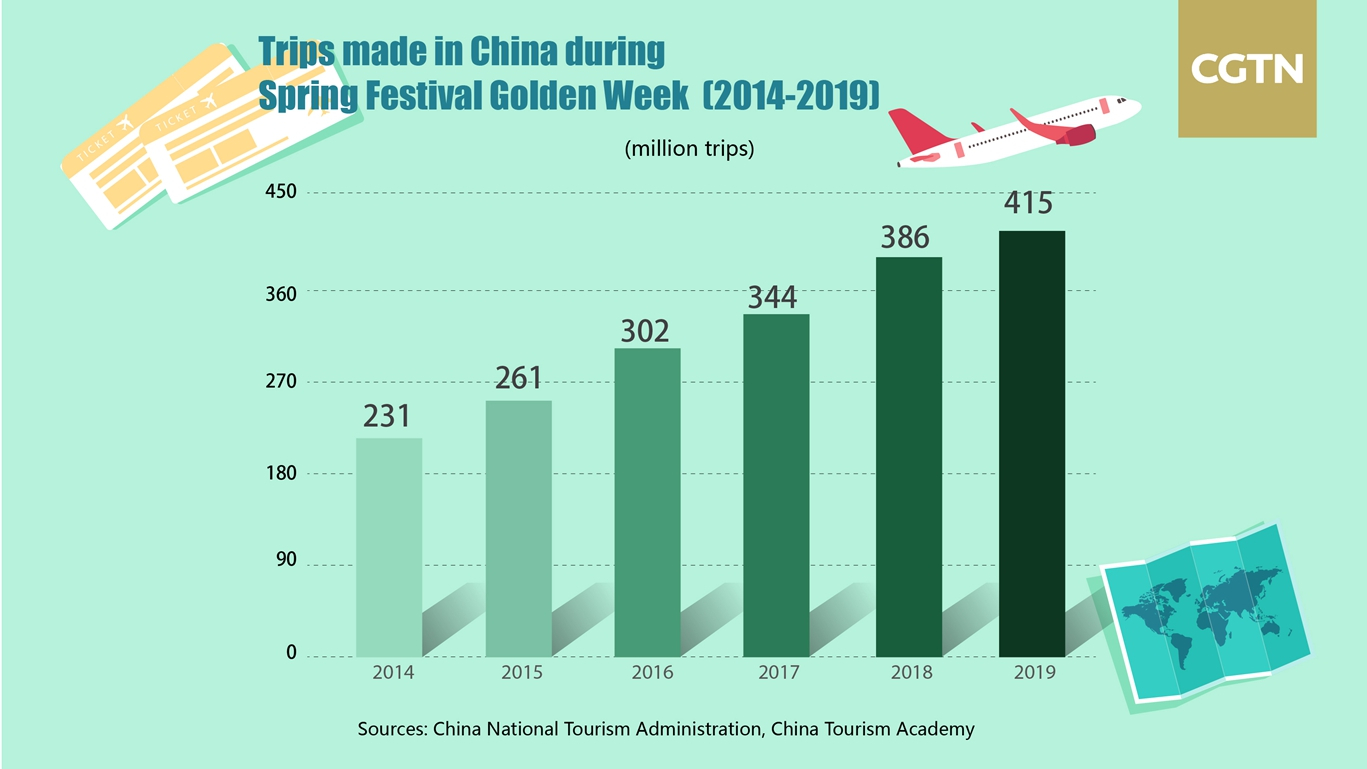 Trips made in China during Spring Festival holiday from 2014 to 2019. /CGTN Photo

Trips made in China during Spring Festival holiday from 2014 to 2019. /CGTN Photo

During the holiday, Beijing attracted 8.1 million tourists, up 5.3 percent compared to last year, and tourism revenue in the capital city reached 8.2 billion yuan, up 12.7 percent, with per capita spending standing at 1,008 yuan.
The Ditan Park and Longtan temple fairs in Beijing received 280,000 tourists during the holiday.
Sanya, in south China's Hainan Province, received over 800,000 tourists, and north China's Inner Mongolia Autonomous Region received over 4.76 million tourists, up 14.6 percent year-on-year.
The cinema box office during the holiday surpassed five billion yuan nationwide.
China's Hong Kong and Macao, and Bangkok in Thailand were the three most popular outbound travel destinations for travelers of Chinese mainland. France became the first European country to make it to the top 10 countries in terms of payments on WeChat, according to data from Tencent.
Data from Alipay, the third-party payment platform of Alibaba's financial affiliate Ant Financial, showed outbound travelers from the country's third- and fourth-tier cities paid through the platform on a more frequent basis during the period as compared to their counterparts from major cities like Beijing, Shanghai and Guangzhou. 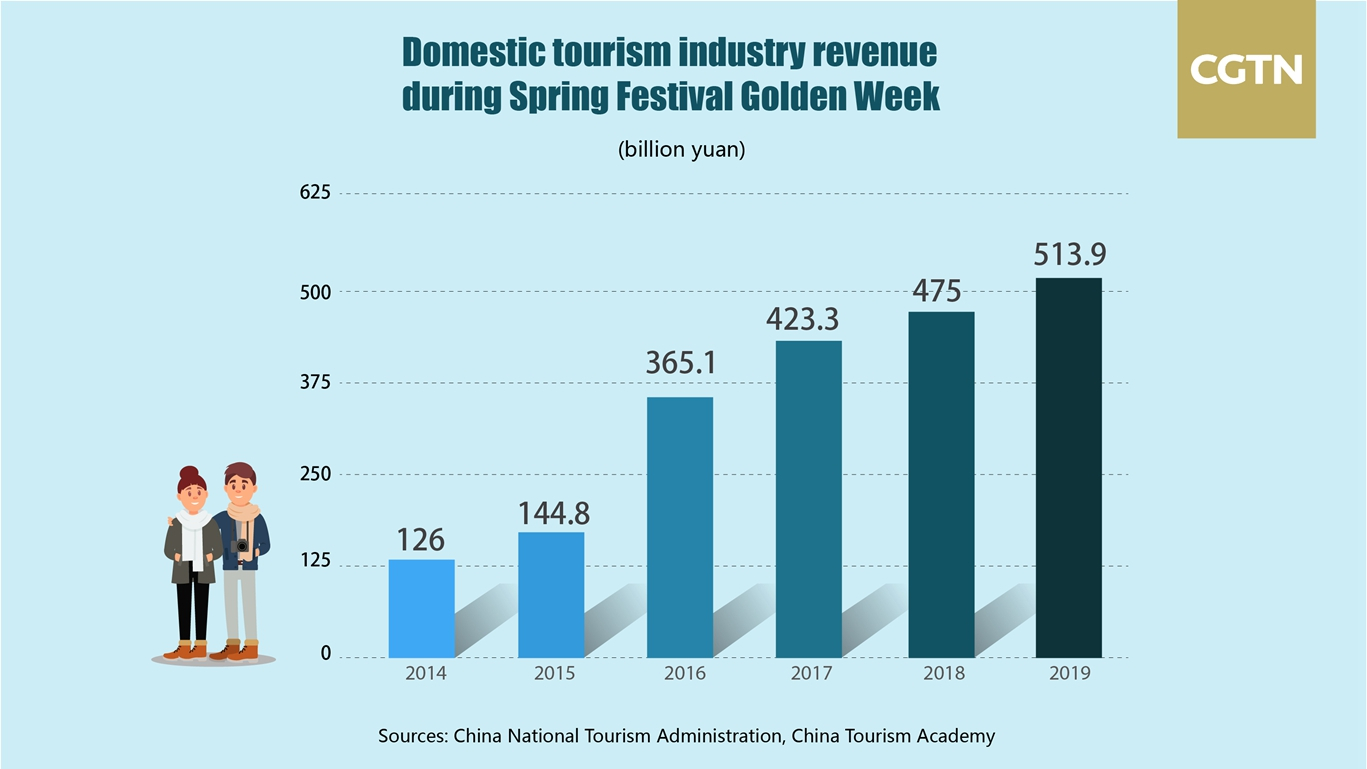 During the Spring Festival, tourism consumption per capita in Shanghai ranked first across the country.
Seven days of consumption totaled 17.73 billion yuan (2.6 billion U.S. dollars), of which February 4 (New Year's Eve) and February 5 (the Chinese New Year's Day) had the biggest share, showing increases of 9.8 percent and 14.1 percent from last year respectively.
According to the China Tourism Academy, traditional cultural packages were one of the travelers' favorites during the holiday, as a survey by an institution under the ministry showed that about 40 percent of travelers had visited museums on their trips.
02:55

Museum tours have been trending during the festive season in China.
Visitors to museums, art galleries, libraries, science and technology museums, and historical and cultural blocks during the Spring Festival accounted for 40.5 percent, 44.2 percent, 40.6 percent, and 18.4 percent respectively, and 34.8 percent of visitors experiencing various cultural performances.
Tickets for the Forbidden City were sold out days into the holiday week. One visitor said he brought his daughter to broaden her horizons. "I brought my child so that she can get some idea about the long history and abundant culture of our country."
(Infographics by Cao Qingqing and Qu Bo; CGTN's Xing Ruinan also contributed to this story)