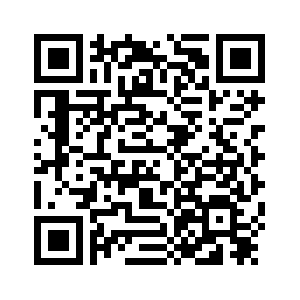 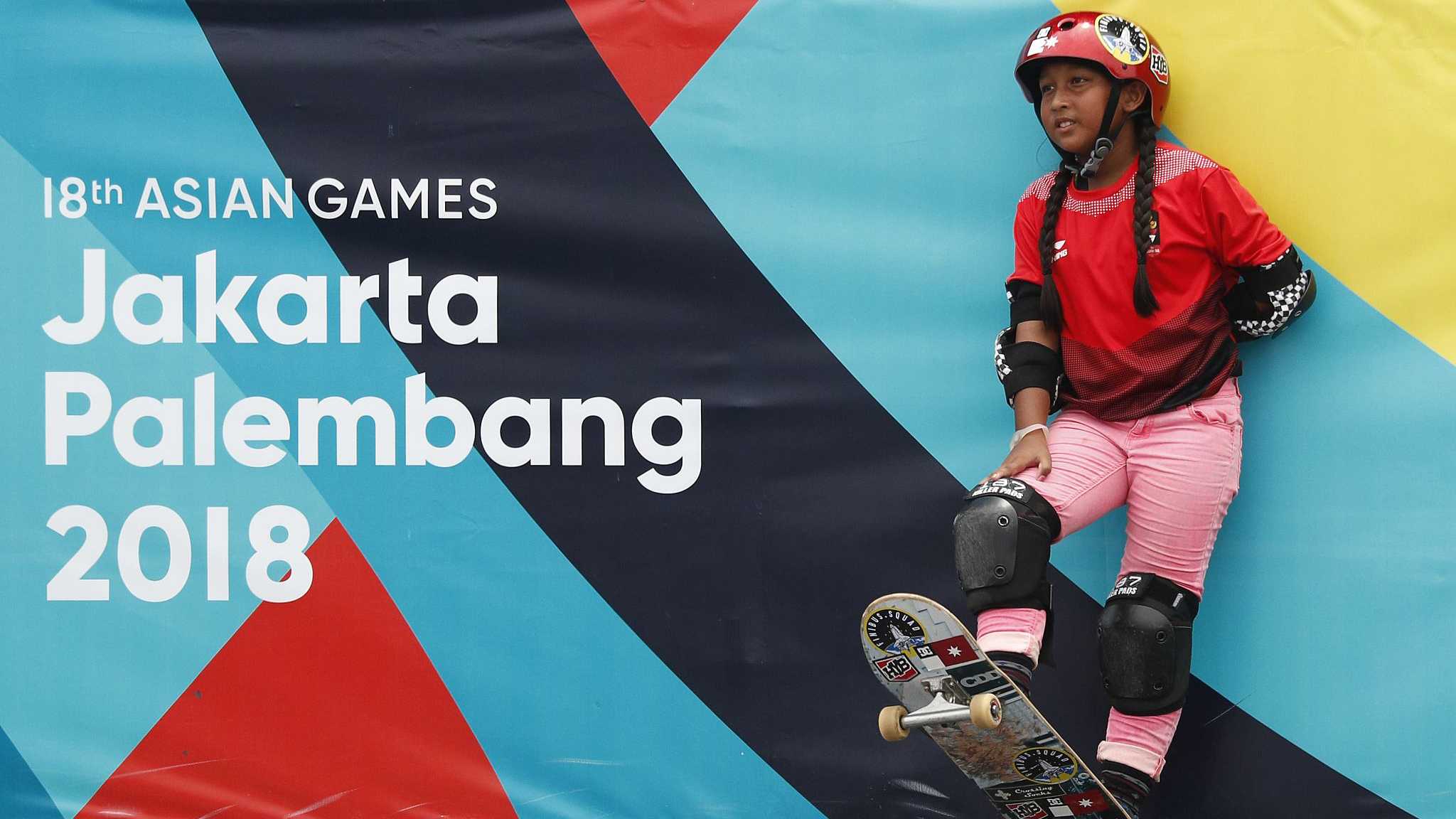 With the adding of sports climbing in the Olympic Games Tokyo 2020, the possibility for extreme sports to enter the multi-sporting events has elevated. This summer in Jakarta, four X-sports - paragliding, skateboarding, sports climbing and jet-ski - has diversified the games.
Those sports are all, for the first time, being held at the Asian Games. That is a bold innovation as X-sports, which are more dangerous and full of rebellious spirit, are naturally the opposite of the mainstream sporting events.
But under pressure given by the fall of audience rate, could X-sports really bring back the younger generation's attention for the traditional Games?

Paragliding is a flying sport that requests athlete to control a parachute-like aircraft to start from a height and glide without mechanic power towards a particular destination on the ground.
Due to the uncertainty of air flows which could cause dropping risk, this kind of sport is defined as 'extreme sport,' and that could be proven by the heavy leg injury of China's Wang Jianwei in this Asiad. 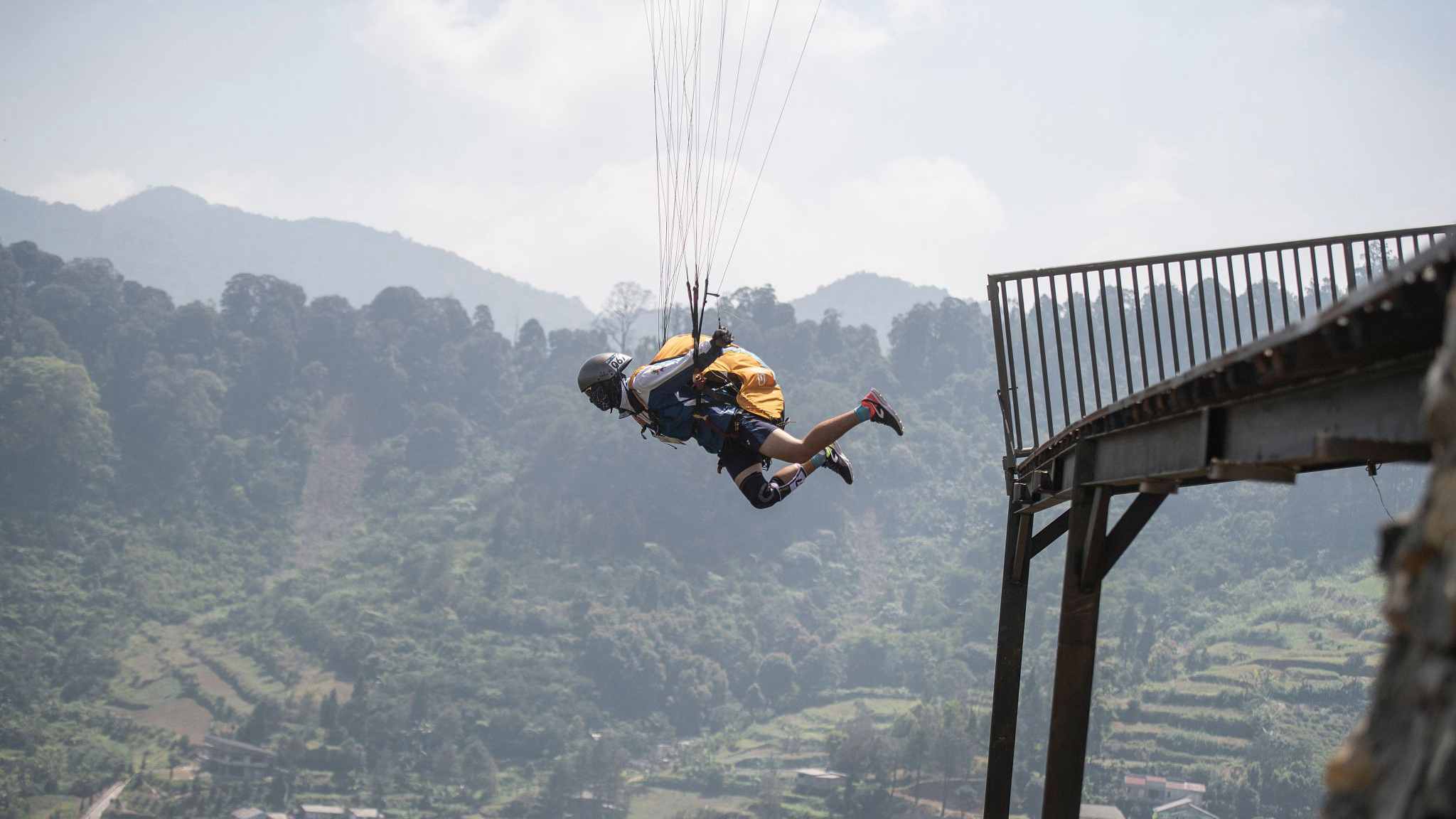 Paragliding athlete takes off in the 2018 Asian Games. /VCG Photo

Paragliding athlete takes off in the 2018 Asian Games. /VCG Photo

Three females, and five males athletes - one couple (wife Li Chennan and husband Wang Hongji) - participate in the individual/team accuracy and the team cross country.
For team accuracy, China's men's team ranked in fifth place, while the women's team came in fourth place, and for the individual competitions, no Chinese athlete finished in the top five.
Paragliding is an expensive sport as its equipment costs a lot of money and it takes a long time to bring up a qualified athlete. As well to become members of the national team, candidates should pay for the national selection games by themselves.
But this kind of 'unknown' sport could be involved in the Asian Games but not recognized just as aerobatics, already showing the extension for the definition of 'sports' in people's mind.

Skateboarding originated from streets and for a long time was popular in the suburban cultural. But now that it's being held at the 2020 Tokyo Olympics, skateboarding is taken serioulsy this year in Jakarta.
The people under 30-years-old mainly practice skateboarding. Indonesia's Aliqqa Novvery was born on April 2, 2009, and is the youngest player for this Asian Games. She began skating at the age of seven in Jakarta under the guidance of her cousin.  And before that, she practiced ballet dancing since three years old. With two-years of pactice, she qualified for the Asian Games by ranking in second place for the women's group in a national selection. And her ambition is to compete at the 2020 Olympic Games in Tokyo, Japan. 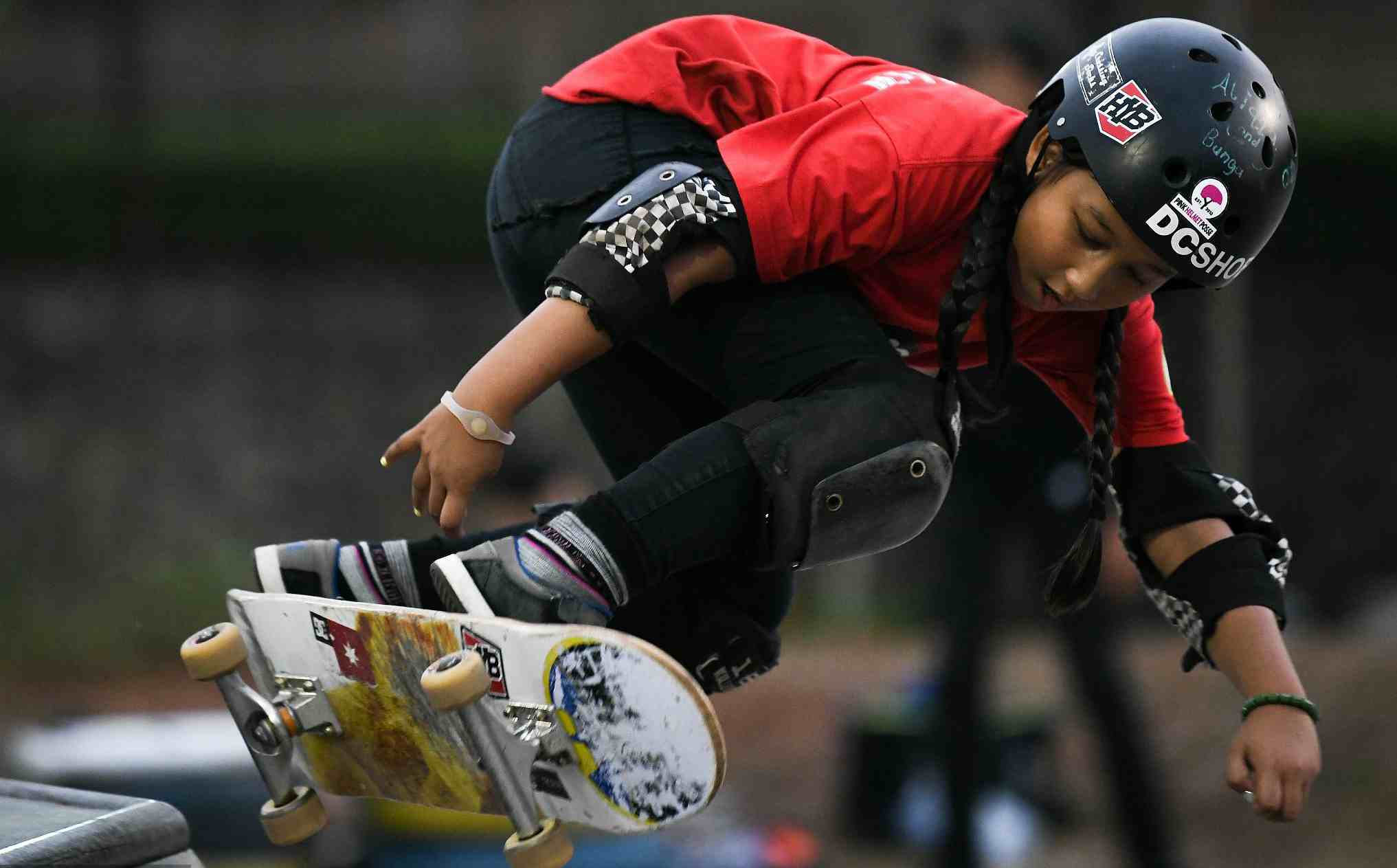 Indonesian skateboarder Aliqqa Noverry, 9, demonstrates her skills at a public park ahead of the 2018 Asian Games in Jakarta. /VCG Photo

Indonesian skateboarder Aliqqa Noverry, 9, demonstrates her skills at a public park ahead of the 2018 Asian Games in Jakarta. /VCG Photo

There are two categories - street and park - for both men's and women's events. In street skateboarding, elements like staircases and handrails are included while steep inclines and curves are the main features of a park skateboarding course.
China sent four female and three male skateboarders to present in the Skatepark, Jakabaring Sports City, Palembang on August 28 and 29.
Finally, China only had the 20-year-old, Zhang Xin to win a bronze medal for the women's park, and Japan bagged two gold medals for men's events, two silvers for women's events and one gold medal for women's park. Aliqqa Novvery ranked the sixth in the women's street.
That could explain why Tokyo Olympic Committee intended to add this sport into the Games because Japanese skateboarders ability ranked high in this area.

The same Olympics invitation goes to sport climbing, and in Jakarta, speed climbing, speed relay and combined climbing are included, for both men and women.
China's national sport climbing team was formed one year ago, and for this time, they recruited 18 athletes to participate. The 29-year-old captain Zhong Qixin has already spent 13 years on this sport and has won uncountable championships and world cup's titles.
On July 11, Zhong spent 5.80 seconds to finish the 15-meter high-speed climbing competition at the IFSC (International Federation of Sport Climbing) in France. 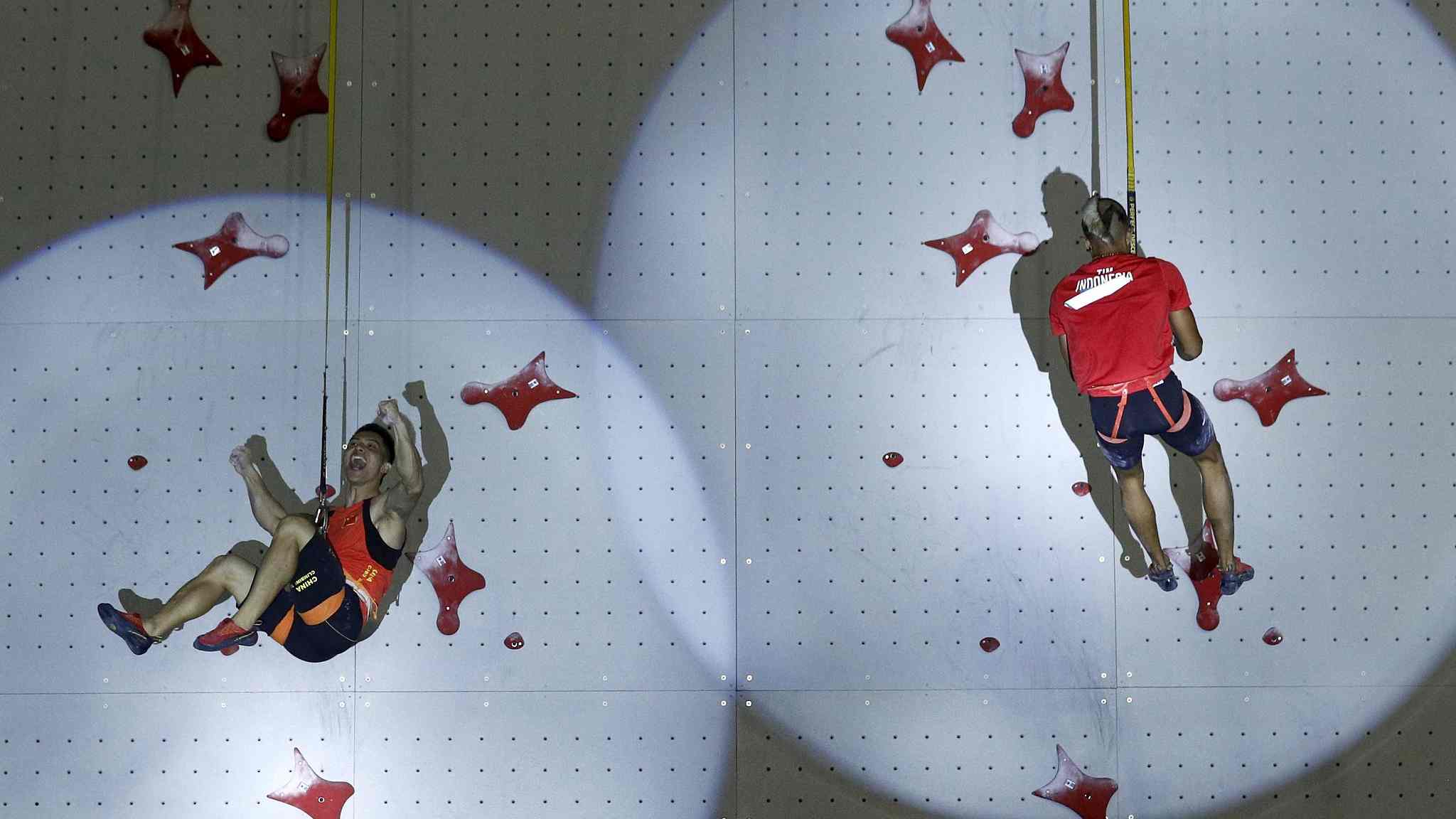 However, in Indonesia, the world speed climbing topper, unfortunately, bagged just a silver medal at the men's speed (15m) final, losing to the 24-year-old Iranian rival, Reza Alipour, in the one-on-one hit by a false start.
For the women's speed climbing event, two of Indonesia's female athletes, Susanti Rahayu Aries and Lestari Puji beat China's He Cuilian to dominate the podium.
The men's and Women's combo and speed replay events are still ongoing, and through the performance of China's climbers, it could be a long way for Chinese to improve their athletism for this event.

There are four types of competitions for jet-ski - runabout 1100 stock, ski modified, runabout limited and endurance runabout open. China recruited only two athletes Wang Xiaowei and Wu Ronghua to join the events.
Jet-ski sport runabout limited final during the 2018 Asian Games in Jakarta. Neither athlete from China earned a medal in their events last year.  This means the China team needs to promote this sport and improve its abilities to perform. 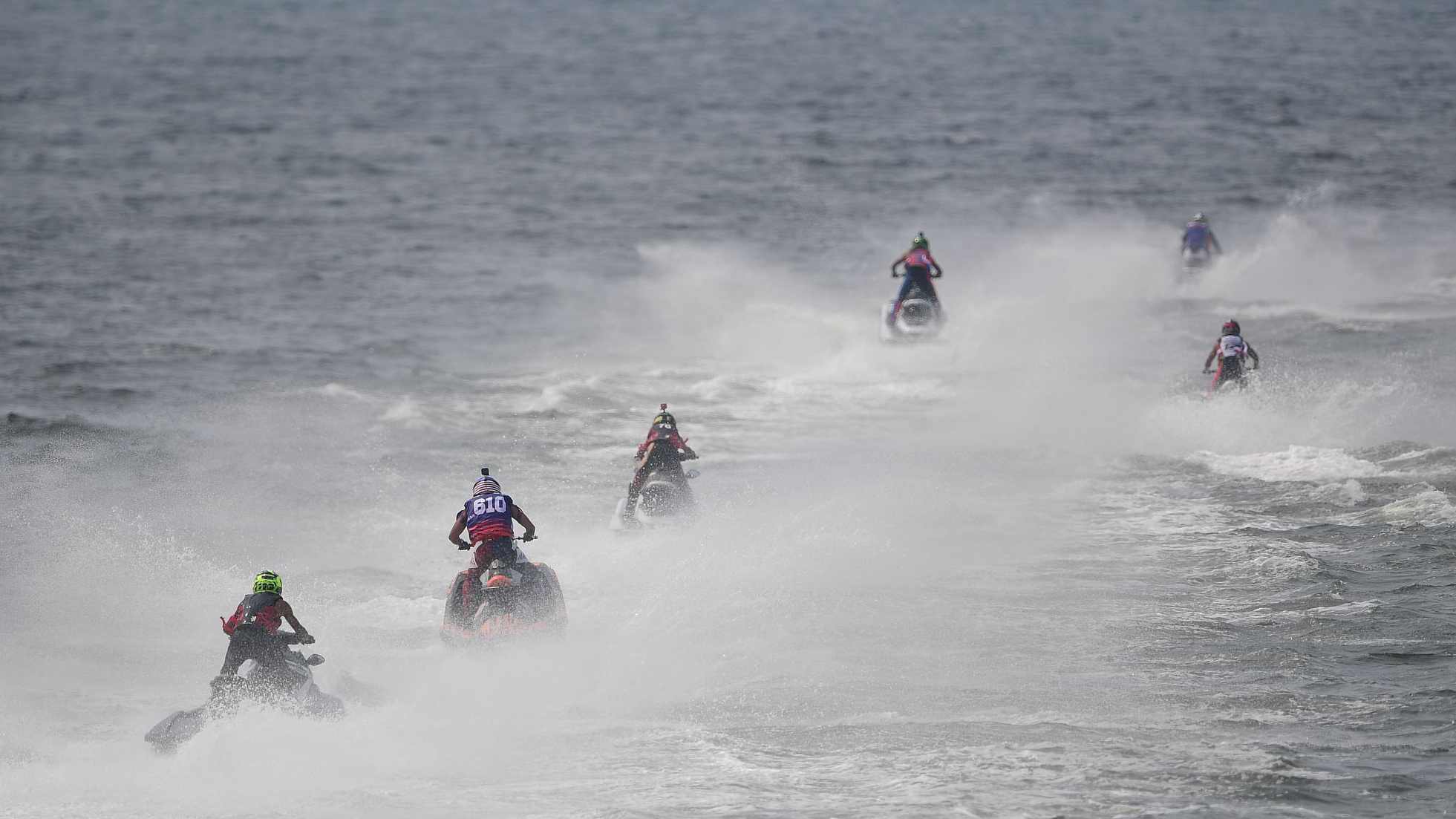 X-sports formerly represented a free-spirit, and their aim is mainly to create something spectacular rather than "higher, faster, stronger." Although the high-level extreme sports athletes were primarily generated in developed countries, the people there have less pressure and a long history in their sport.
Indonesia's women climbers in a veil and full-body-covered sporting suit were "flying" off the cliff to win the medals, even champion titles.  This shows positive energy to encourage people to pursue what they really want in their life.
Asian Games helped promote extreme sports, as well as prepare athletes for the coming Tokyo Olympic Games. To satisfy the fans expectations and to save the declining audience ratings, the change in the diversity of sport events is necessary. China should learn from the Asian Games to make better preparation for 2020.
(Top image is Indonesia's 9-year-old skateboarder Aliqqa Novvery. /VCG Photo)