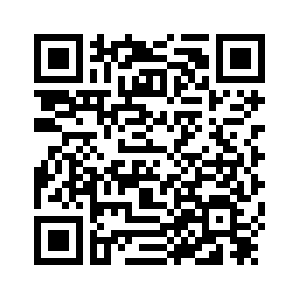 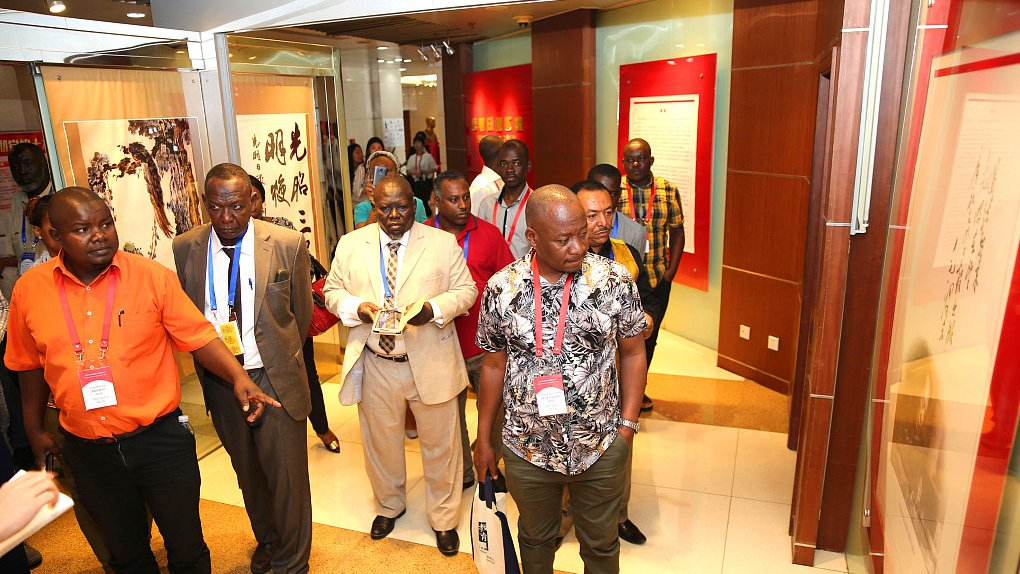 Editor's note: Harvey Dzodin is a senior research fellow at the Center for China and Globalization, and a former legal adviser in the Carter administration. The article reflects the author's opinion, and not necessarily the views of CGTN.
One of the lessons that I learned as an ABC TV vice president was that if you wanted good local news ratings you had to observe the tried and true maxim: “if it bleeds, it leads,” meaning that stories of death and gore usually opened the newscast because such stories always bumped up the ratings. As a result, however, good news stories frequently never saw the light of day, or if they did, they'd be buried in the newscast.
This is exactly what seems to have happened in Nairobi, Kenya, where a terrorist attack by al-Shabaab militants has all but buried recent good news for China and its Belt and Road Initiative (BRI), as well as for Kenya. 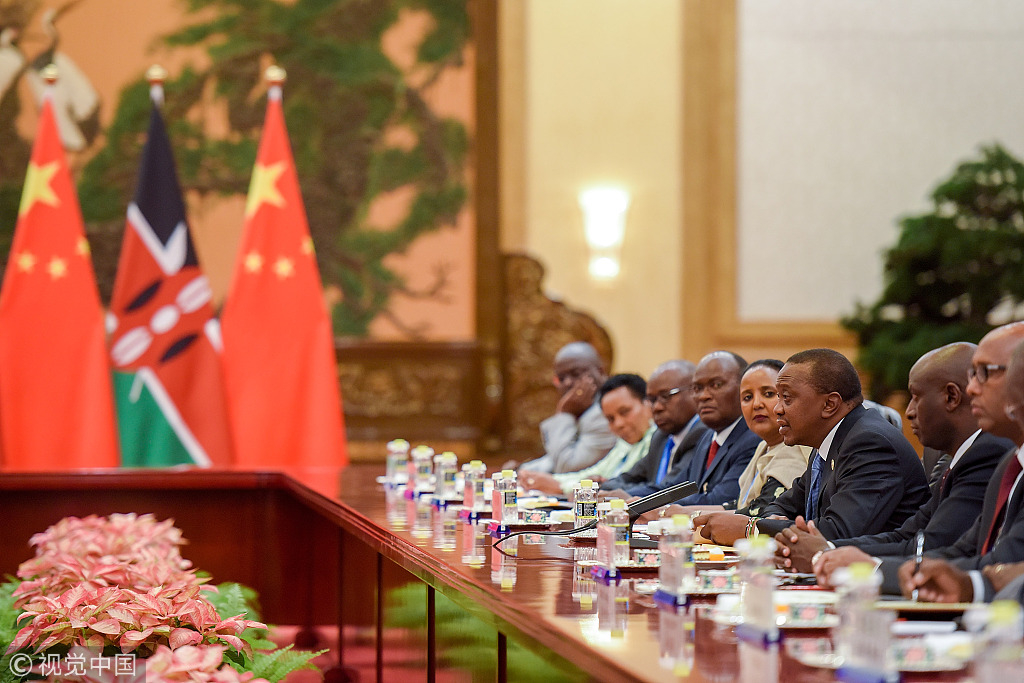 Kenyan President Uhuru Kenyatta (3rd R) speaks during his bilateral meeting with Chinese President Xi Jinping (not pictured) during the Belt and Road Forum for International Cooperation at the Great Hall of the People in Beijing on May 15, 2017. /VCG Photo

Kenyan President Uhuru Kenyatta (3rd R) speaks during his bilateral meeting with Chinese President Xi Jinping (not pictured) during the Belt and Road Forum for International Cooperation at the Great Hall of the People in Beijing on May 15, 2017. /VCG Photo

According to Dr. Julius Jwan, the CEO of the Kenya Institute of Curriculum Development (KICD), starting next year Kenyan students age 10 beginning in fourth grade will have the opportunity to learn Mandarin Chinese. In my opinion, this is quite a milestone even though Mandarin has been taught in South Africa since 2016 and will also be taught in Uganda starting next year.
Even more interesting than the fact that Mandarin teaching is being embraced by African nations is the reasons for the trend that there seems to be to more Chinese language teaching. These reasons are both practical and political.
It's clearly the case that China's bilateral and multinational cooperation with Africa is paying dividends, including through the Forum on China-Africa Cooperation since 2006 and the BRI announced in 2013 by President Xi Jinping.
President Xi's speeches two years ago this month at the World Economic Forum in Davos, Switzerland, and at the UN office at Geneva discussing China's leadership in globalization and in regional and multilateral organizations are clearly reasons. As a rationale for beginning to teach Mandarin to its youngsters. Kenya's KICD specifically cited the fact that, in addition to being one of the most widely spoken languages globally, Mandarin is an official language of the United Nations.
It's no surprise either that the language-centric Confucius Institutes have played a significant part as well in promoting Chinese language study. They have gone from no presence on the African continent in 2004 to more than 50 currently.
But the practical reasons clearly predominate. Kenyans and an increasing number of its African neighbors have clearly demonstrated their pragmatism. This is not at all about a neo-colonialism of which China is falsely accused by some, but about a win-win outcome. 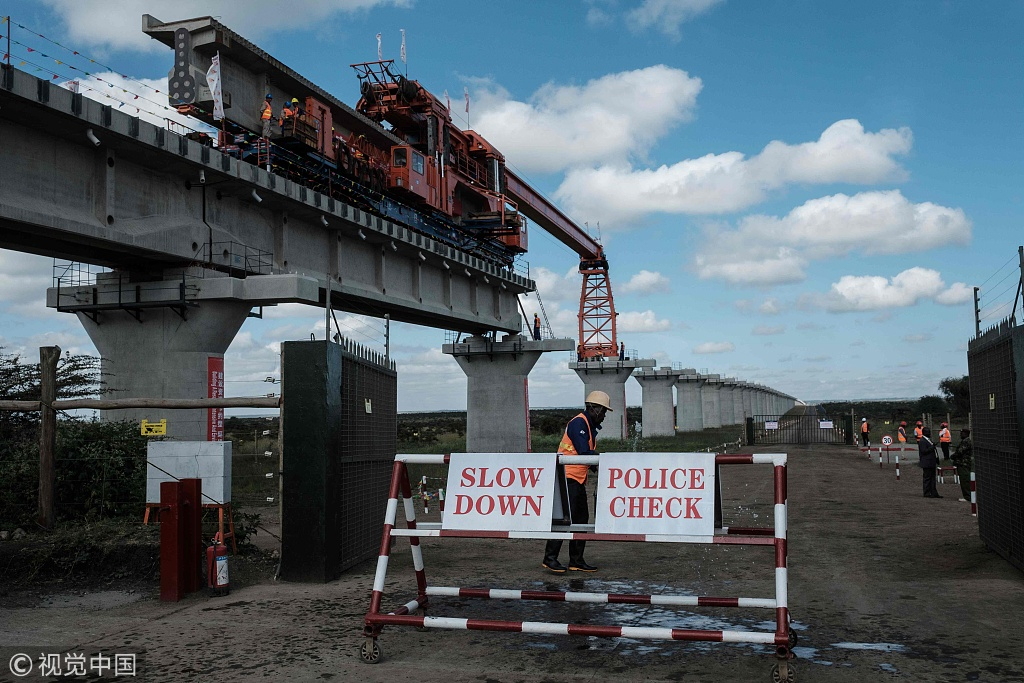 Consider that having a more Chinese-literate population means that the exploding outbound Chinese tourist market will find a more user-friendly country in which to spend time and money. Mandarin-speaking local youth, a demographic often plagued by unemployment in many countries on most continents, will more readily find employment. I've been all over Kenya and know it to be a natural paradise on Earth and it's by far not the only one in Africa. With a Chinese-friendly infrastructure, Kenya's people and economy will benefit, as will its environment with more funds devoted to preserving its unique resources.
Mandarin-speaking Kenyans, all other things being roughly equal, will obviously get priority for the many Sino-Kenyan cooperation BRI projects in the pipeline. I also believe that some of the problems encountered in recent years between the people of both countries in the growing pains phase of the BRI will be reduced, if not eliminated, by speaking a language in common.
Speaking of the BRI, most people mistakenly think it's only about infrastructure and economic connectivity. Those are obviously crucial elements but the fifth BRI pillar is about people-to-people connectivity, soft power and winning hearts and minds. In a phrase, it's all about soft power.
When young Kenyans and Chinese can see each other and can speak in Mandarin and English in person or via one of China's best inventions ever, Tencent's WeChat, they have the potential to personally become friends with each other and with each other's countries. This is the essence of true soft power, win-win cooperation and building a community of shared future for mankind for which they will be on the frontlines of such efforts.
(If you want to contribute and have specific expertise, please contact us at opinions@cgtn.com.)