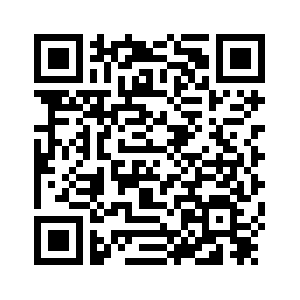 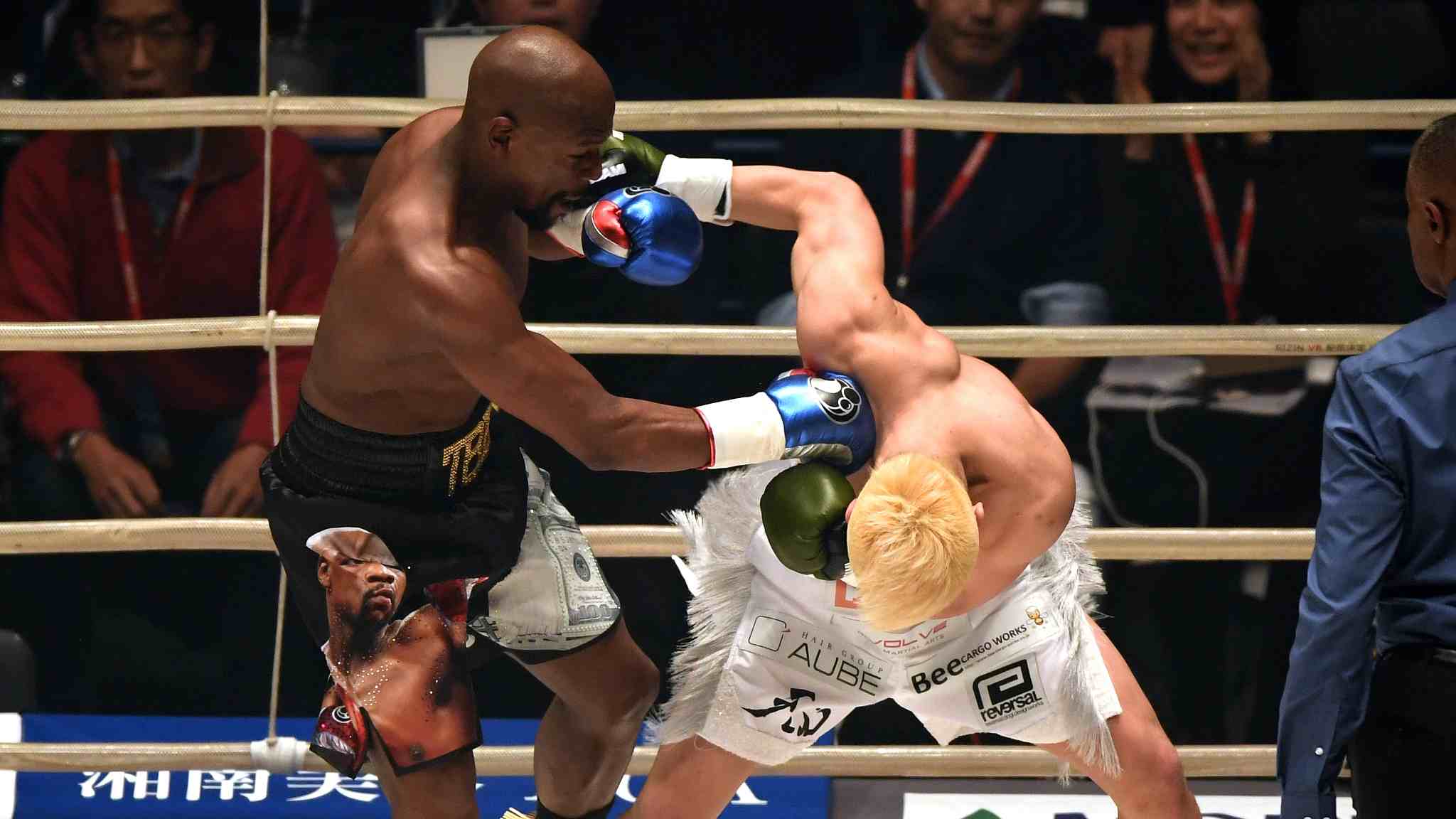 Floyd "Money" Mayweather beat Japanese kickboxing phenomenon Tenshin Nasukawa by a technical knockout on Monday after just two minutes of a New Year's Eve "exhibition" bout that brought the U.S. boxing superstar out of retirement for a big payday.
In a mismatched contest, Mayweather floored Nasukawa, a kickboxer less than half his age, three times in the first round of the three-round contest before the Japanese fighter's trainer rushed in to stop the fight.
"Money" Mayweather has hinted on social media he was pocketing nine million U.S. dollars for the fight, meaning he earned around 4.5 million dollars per minute for the spectacle.
The American boxer at first appeared not to be taking the fight seriously, grinning at his opponent and aiming only soft punches at him.
But he then demonstrated his power, launching a series of jabs and hooks to the head of the 20-year-old Japanese fighter, sending him to the canvas after just one minute with a left hook.
Sensing his opponent was struggling, Mayweather stepped in for the kill, unleashing a flurry of punches that left Nasukawa reeling again within just two minutes of the bout and facing his second standing count after a huge right hook to the head. 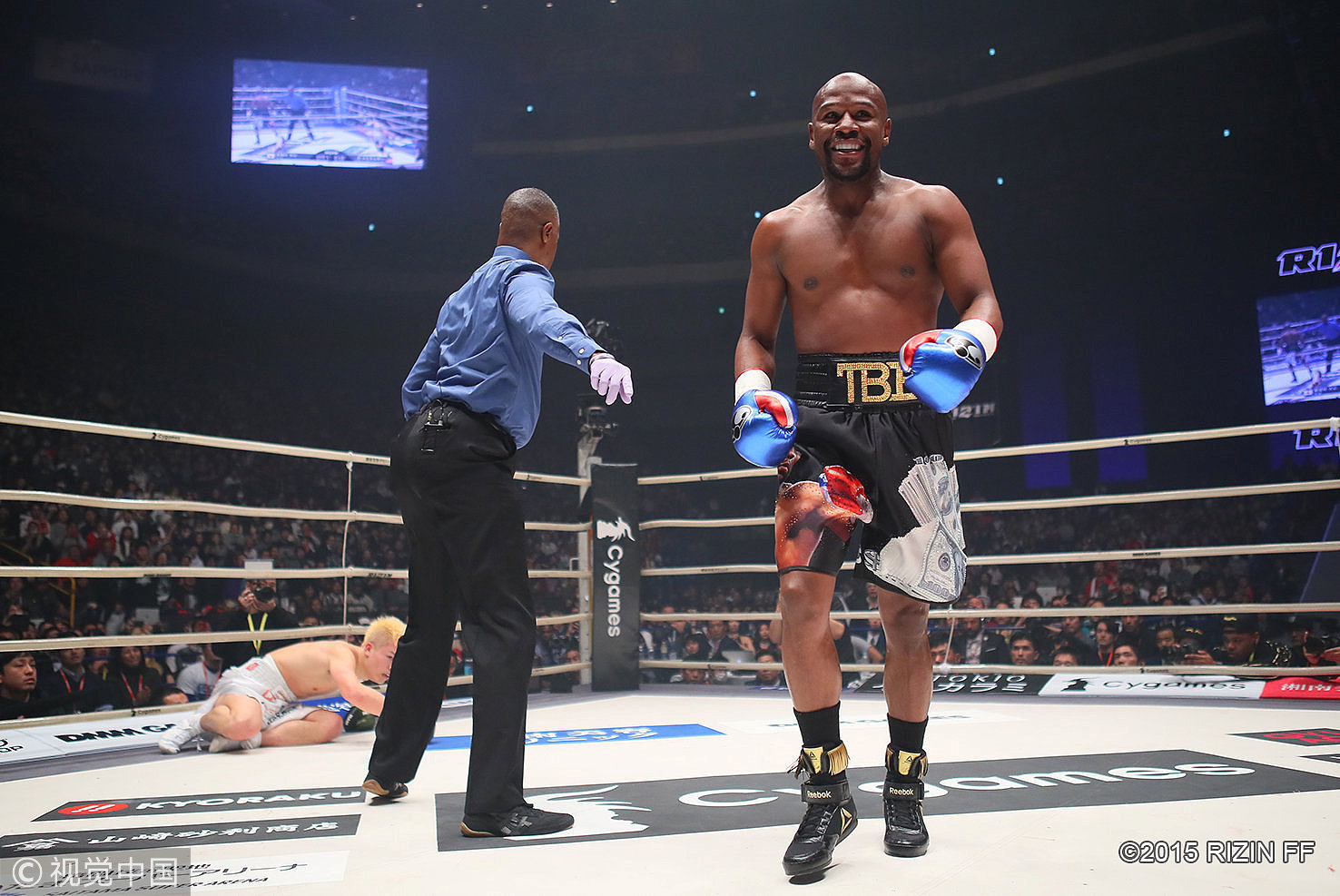 With the Japanese fighter clearly battling to stay on his feet, the trainer rushed in and stopped the fight with less than one minute of the first round remaining.
"It was all about entertainment. We had fun," Mayweather said in the ring after the event.
"I'm still retired. I don't look forward to coming back to boxing but I did this just to entertain the fans in Japan," added the 41-year-old.
The rules were very strictly defined: three, three-minute bouts and boxing only, kickboxer Nasukawa was reportedly facing a 5-million-U.S.-dollar fine if he aimed a kick at Mayweather.
There were no judges, with only a knockout or technical knockout considered a victory in the bout, promoted as a pure exhibition match.
Crucially, the match did not feature on the record of either man, allowing them both to retain a cherished unbeaten record.
"This won't go on my record. This won't go on Tenshin's record. Tenshin is still undefeated. I'm still undefeated. This is just entertainment for the people," he added.

The purse for the event was not disclosed but "Money" hinted on Instagram that he would be making 1 million dollars per minute.
"What if I told you I was making 9,000,000 U.S. dollars for nine minutes of sparring in Tokyo, Japan," he wrote on his official page. "Would you do the same if you were me? I like to call it a nine-minute walk-thru," the post added. 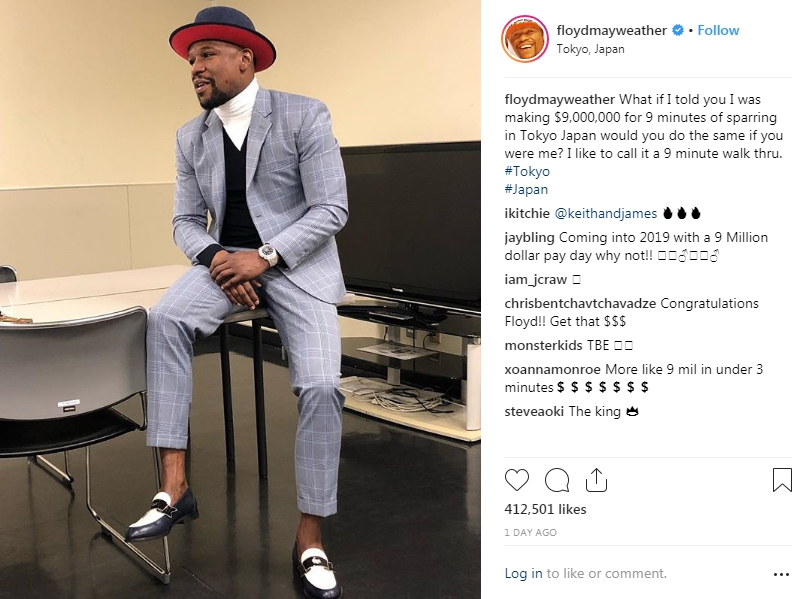 U.S. boxing legend Floyd Mayweather wrote about the money he earned from the exhibition match on his Instagram page.

U.S. boxing legend Floyd Mayweather wrote about the money he earned from the exhibition match on his Instagram page.

Mayweather, a legend in the boxing world, has a perfect 50-0 record with 27 knockouts. He won world titles in five different weight divisions and was considered the best pound-for-pound boxer in the sport.
Virtually unknown outside the kickboxing ring in his own country, Nasukawa from Chiba near Tokyo also boasts an unbeaten record.
He won the world junior karate championship, made his professional kickboxing debut at the age of 16 and has a 28-0 record with 21 wins by knockout.
Promoters RIZIN have hailed him as "perhaps the best combat sports prospect the country has ever seen" and the 20-year-old himself had claimed he has a "punch that boxers don't have."
But he hardly penetrated Mayweather's defenses and barely made the older man break a sweat.

This is the second time Mayweather has been coaxed out of retirement. Last year, he knocked out mixed martial arts fighter Conor McGregor in the 10th round of a super-hyped boxing match. 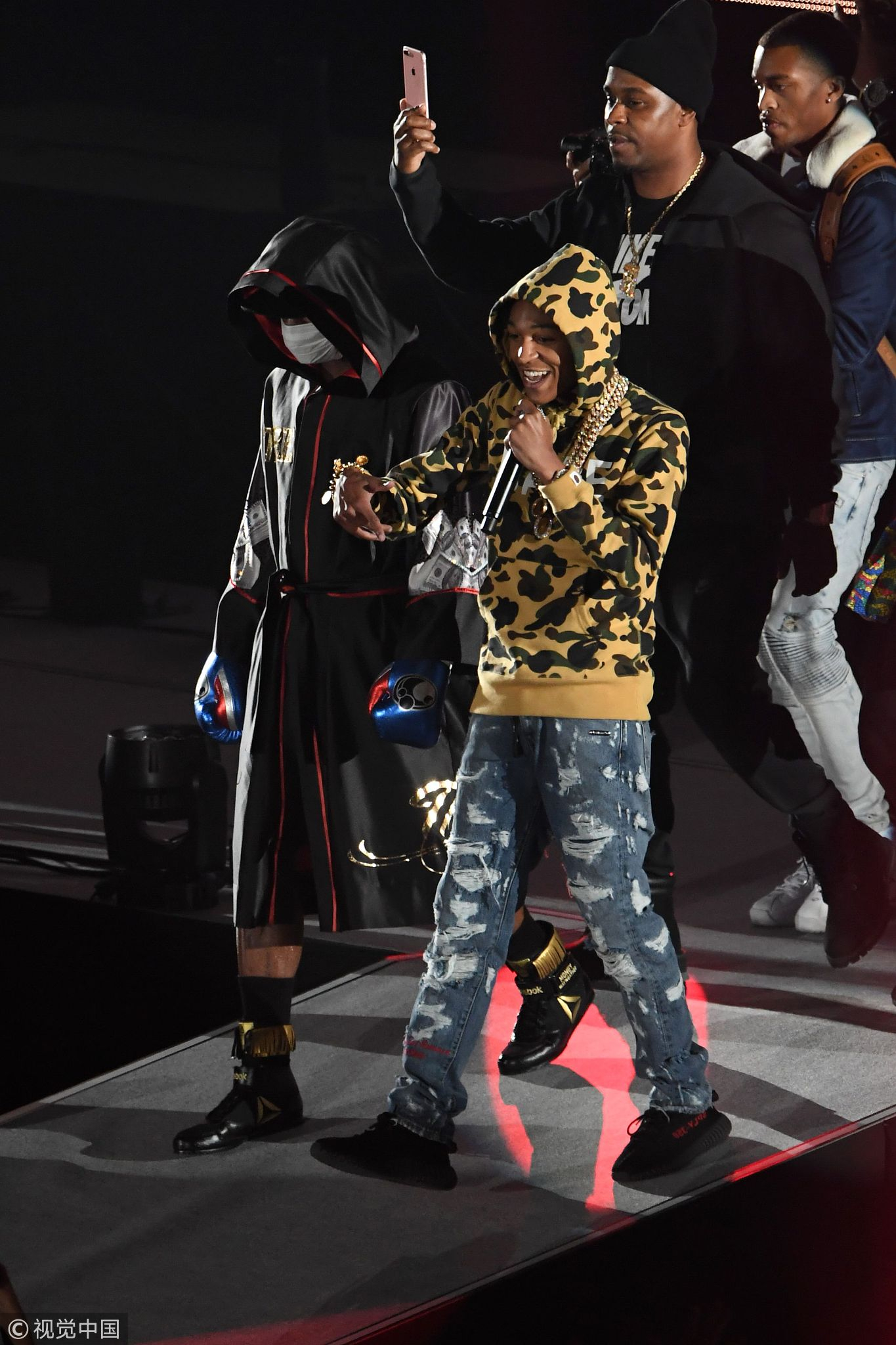 There are also unconfirmed rumors Mayweather could take on reigning UFC lightweight champion Khabib Nurmagomedov, who said last month any match-up would be "twice as interesting" as the McGregor fight.
Monday's Tokyo fight was on-off from the start.
It was announced out of the blue on November 5, with Mayweather saying it had "always been a goal of mine to go outside out of the U.S. and display my talent."
However, just as abruptly as it was announced, it was called off just three days later.
Mayweather said he had been "blindsided" into the contest by the organizers.
But the promoter flew to the U.S. to meet Mayweather and announced a week later that the fight was back on, saying that a "misunderstanding" had been resolved.
Source(s): AFP