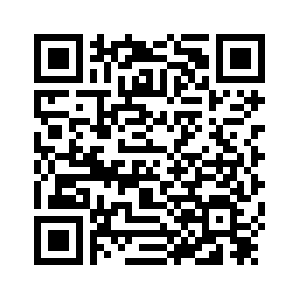 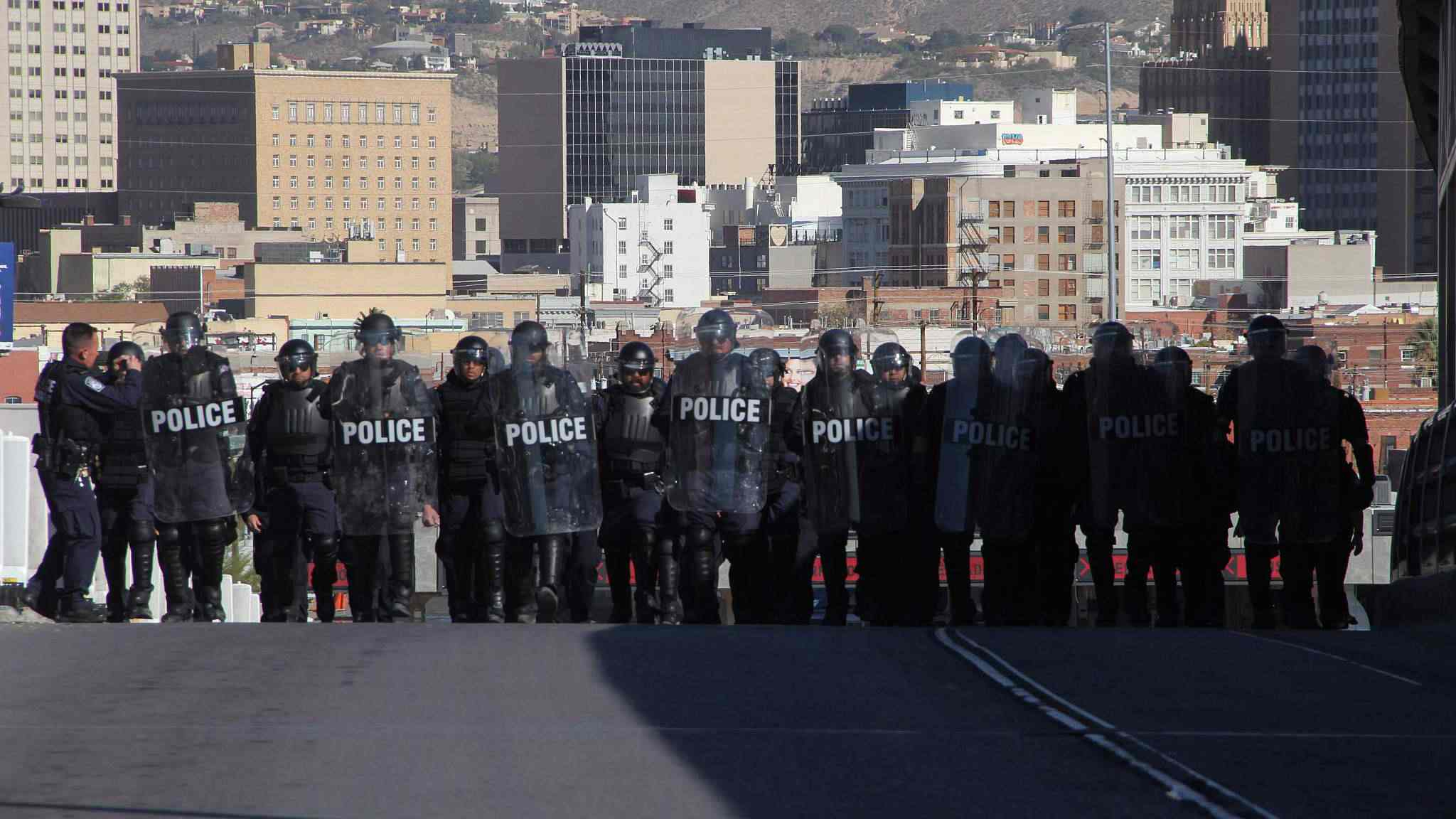 Editor's note: Yuan Sha is an assistant research fellow at the Department for American Studies, China Institute of International Studies. The article reflects the author's opinion, and not necessarily the views of CGTN.
Immigration has been a signature issue of the Trump administration. From signing the “Travel Ban” to enforcing the “Family Separation” policy, US President Donald Trump has made a series of innovative ways to fulfill his promise on the campaign trail. On Friday he signed a proclamation that would deny asylum to migrants who enter the country across the border with Mexico illegally. It is said to be Trump's new strategy to deter the migrant caravan from entering the US.
A real crisis or a constructed one?
Trump made the case for a stricter asylum policy on the alleged Central American migrant crisis. Due to chronic domestic violence, rampant drug abuse and persisting corruption in the “Northern Triangle” of Central America, tens of thousands of people from Honduras, El Salvador and Guatemala fled home to seek asylum in Mexico and the United States. Recently, a stream of 7,000 migrants was seen moving north from Mexico to the US-Mexican border. Another smaller caravan of 3,000 migrants was spotted between Guatemala and Mexico. 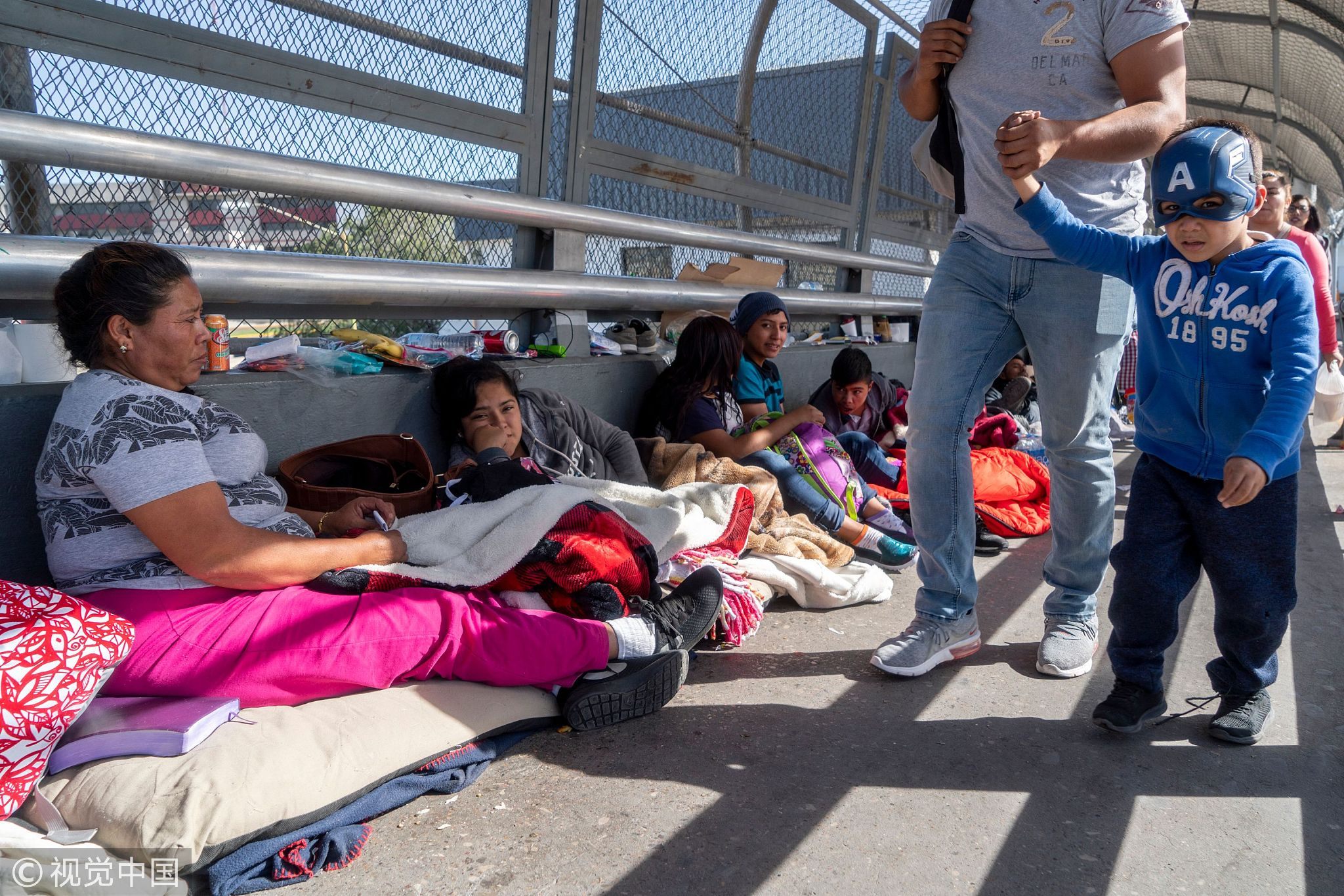 Trump called the migrant caravans an “invasion” which would constitute a “national emergency”. But the reality on the ground might be different from his rhetoric. After all, these migrants are just displaced people seeking a better life, and it would be far-fetched to see them as invaders. Furthermore, the migrants are still hundreds of miles away in Mexico, and it would take them weeks to knock at the US door. And the caravan has already shrunk in half as many chose to stay in Mexico.
The migrant crisis is more constructed than real. Trump repeatedly warned about criminals or even Middle Eastern terrorists hiding in the caravan, though he later confided that there is no evidence to support his claim. In fact, he was using it more as a scare tactic to stimulate the Republican base in the run-up to the mid-term election. He also took on migrants as a diversion to more pressing concerns, such as the rise in hate crimes and domestic terrorist attacks which he dismissed outrightly.
The effect of playing the immigration card on the mid-term election is mixed, but it might have helped Republicans hold onto and even expand their majority in the Senate. More importantly, by lambasting on the migrant caravan on his “bully pulpit”, Trump succeeded in alerting the US voters to the imminent threat. Exit polls indicate that voters listed immigration as a top issue in this mid-term election.
An offensive on asylum-seeking
In order to deter the migrant caravan from entering the US, Trump has made an unprecedented move by sending 5,200 active troops to the southern border, which made the troop scale at the border at par with the number combating Islamic State extremists. He also threatened to send another 10,000 troops and said that migrants throwing rocks would be seen as using firearms, and the US troops could fire on them. But later he backtracked on this, and the Pentagon promised to only provide support to border enforcement officials and not to touch migrants. 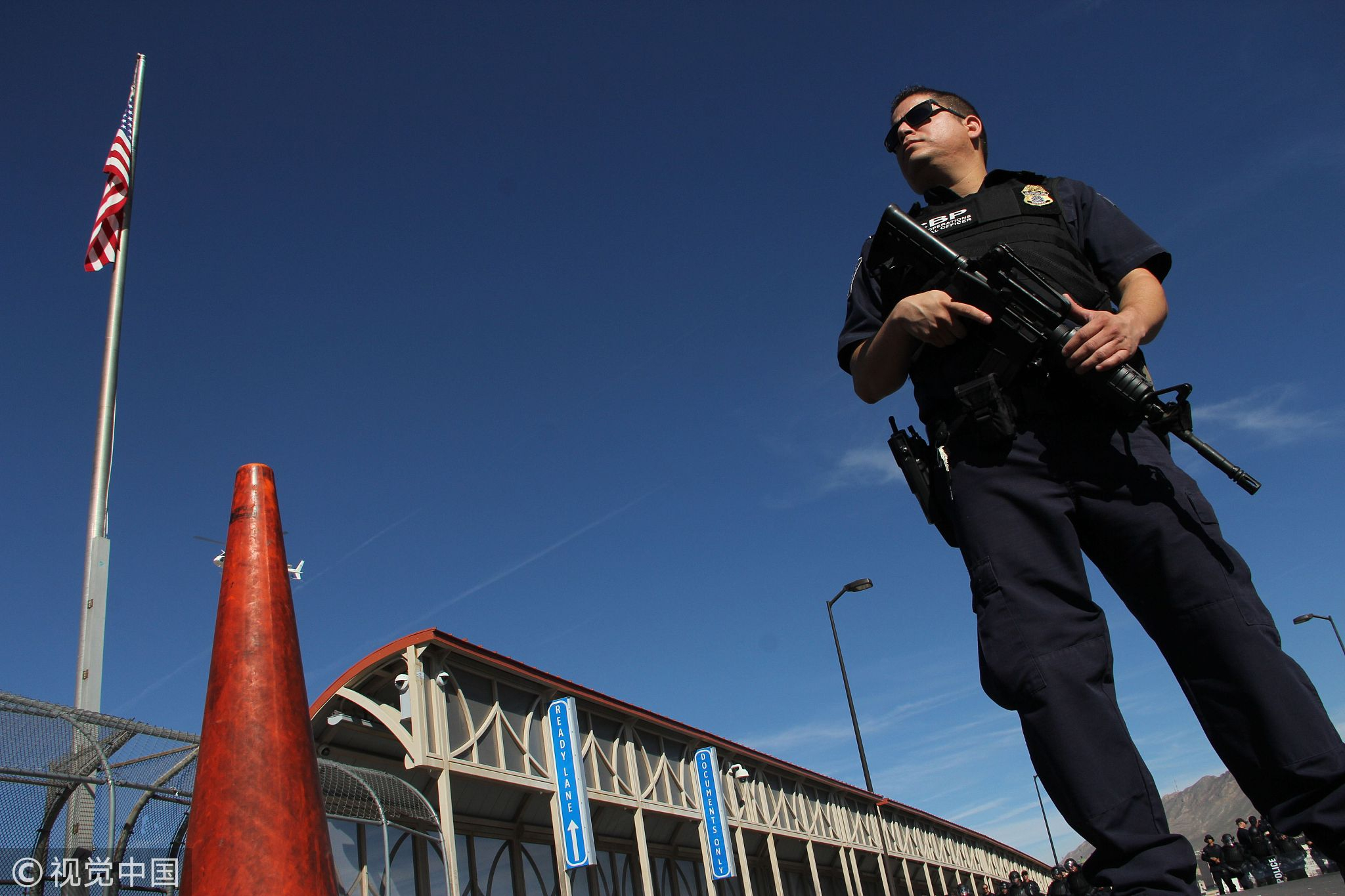 A US customs and border patrol agent takes part in a border security drill at the US-Mexico international bridge, as seen from Ciudad Juarez, Mexico, Oct. 29, 2018. /VGG Photo

A US customs and border patrol agent takes part in a border security drill at the US-Mexico international bridge, as seen from Ciudad Juarez, Mexico, Oct. 29, 2018. /VGG Photo

Trump took on asylum policy as another way to shut the migrants out. In fact, he has long seen US asylum policy as a “loophole” in border security. The new rule just announced is a fast-track regulation that would restrict asylum access for migrants caught crossing illegally at the US-Mexican border. Trump is expected to issue a Presidential Proclamation soon and bring this rule into effect. As to specific tactics, it is reported that the Department of Homeland Security is considering using the method of “metering”, which is to limit the number of legal entry by making a waitlist for people to go through the inspection process.
As Jeff Sessions resigned as Attorney General, Trump is expected to pick a successor who would be more faithful in executing his orders. It is reported that Trump is also considering firing Secretary of Homeland Security Kirstjen Nielsen for her weakness on border security. One likely candidate is Kris Kobach, a right-wing hawk on immigration.
More controversies to rise
This asylum decision would arouse controversies around its legality, effectiveness, and humanitarianism.
On the legal side, it challenges the US Immigration and Nationality Act. The Act stipulates that anyone who arrives in the US may apply for asylum if he or she has a “well-founded fear of persecution on account of race, religion, nationality, membership in a particular social group or political opinion.” With a Democratic-controlled House of Representatives, it would undoubtedly face a stronger pushback. 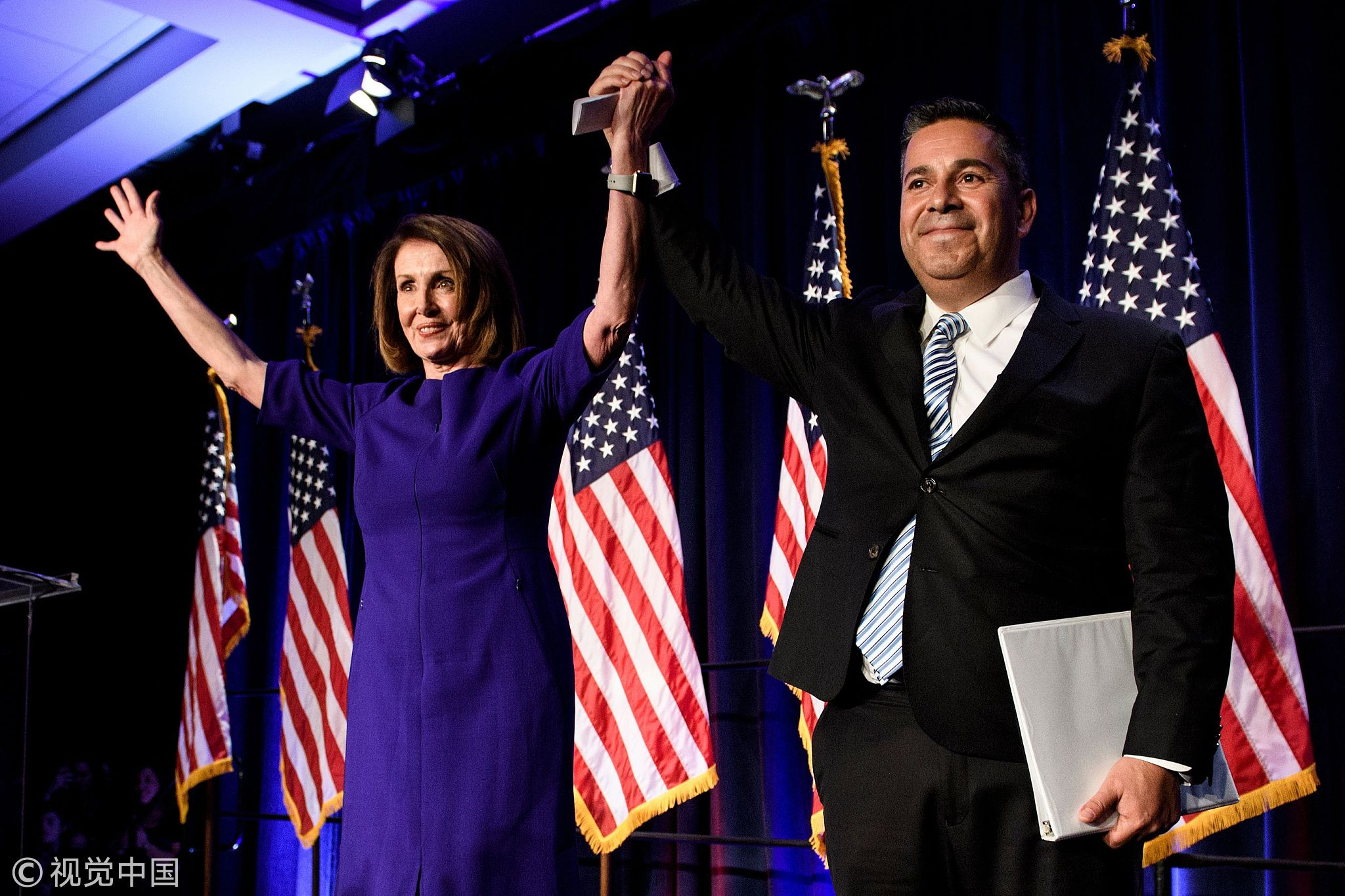 On the effectiveness side, it might have a short-term effect but would be counterproductive in the long term. It would deter migrants from seeking legal means to get into the US, instill fear and hatred among immigration groups, and a massive repatriation would be overwhelming for the already vulnerable society in Central America, which would intensify conflicts and cause a bigger refugee crisis in the future.
On the humanitarian side, it would renege on enshrined American values. The US has fashioned itself as a City on a Hill and flourished as a country of immigration. Trump's actions would take a toll on US image. And his inflammatory rhetoric would add fuel to the rising populism and extremism in the US. Days before the mid-term election, Trump aired a racist-charged campaign ad, accusing Democrats of letting bad people in. Trump's recent spat with a CNN journalist over “caravan invasion” further illustrates the divisive force of his rhetoric.
(If you want to contribute and have specific expertise, please contact us at opinions@cgtn.com)