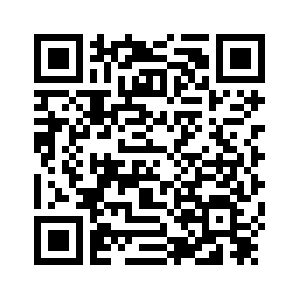 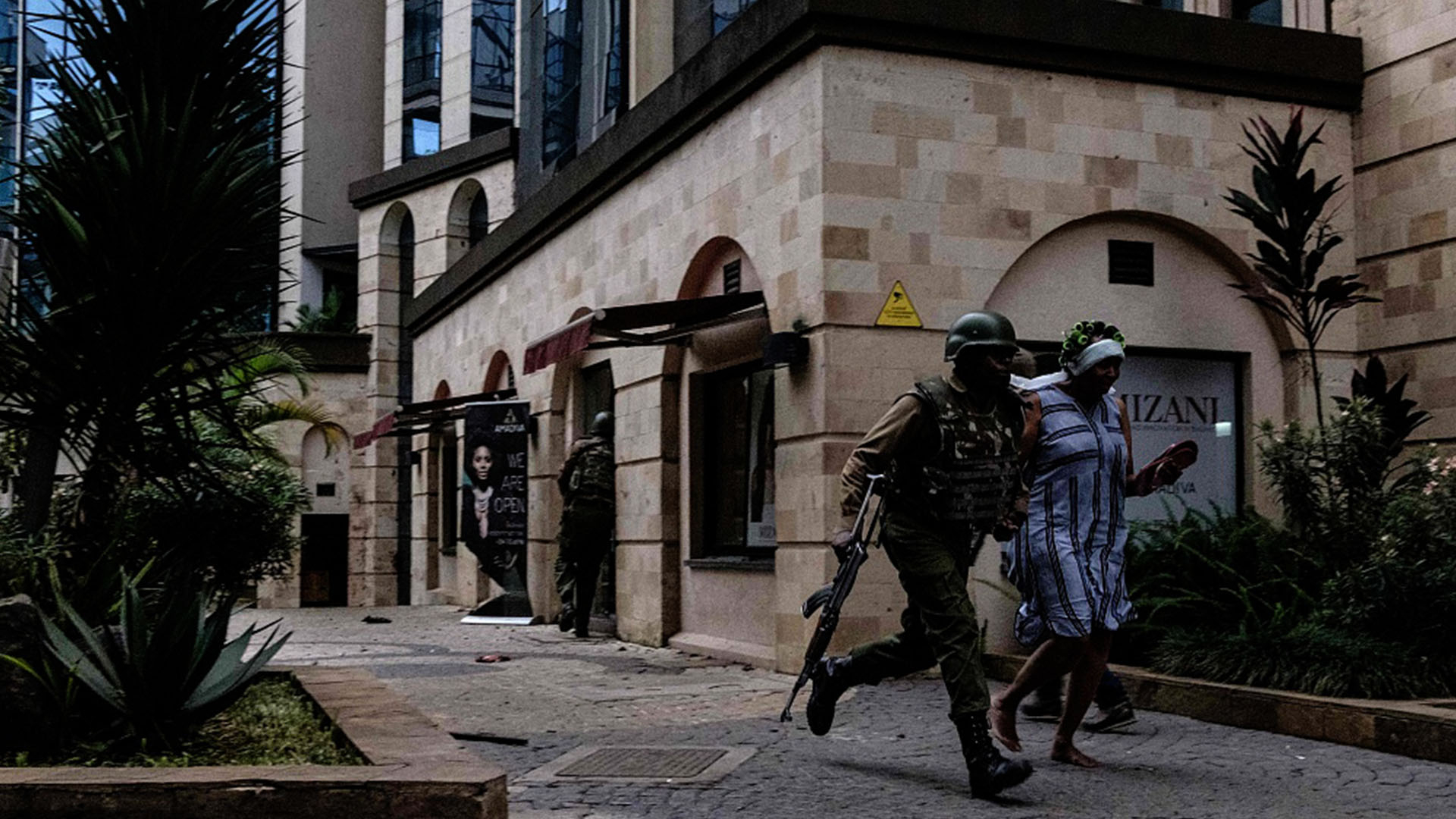 Gunmen blasted their way into a hotel and office complex in the Kenyan capital on Tuesday, killing 21 people in a 19-hour siege. Somali Islamist group al-Shabaab said it was behind the attack.
Updated at 7:00 a.m. Thursday BJT
The death toll has climbed to 21 after six more bodies at the scene were found and the death of a wounded police officer.
Joseph Boinnet, inspector-general of Kenyan police, said some 28 people are also injured.
Some of the victims were identified as an American citizen and businessman Jason Spindler, British citizen Luke Potter who works for an international development charity as well as Kenyan James Oduor and his two friends Abdalla Dahir and Feisal Ahmed.
Read more:
A timeline of al-Shabaab attacks 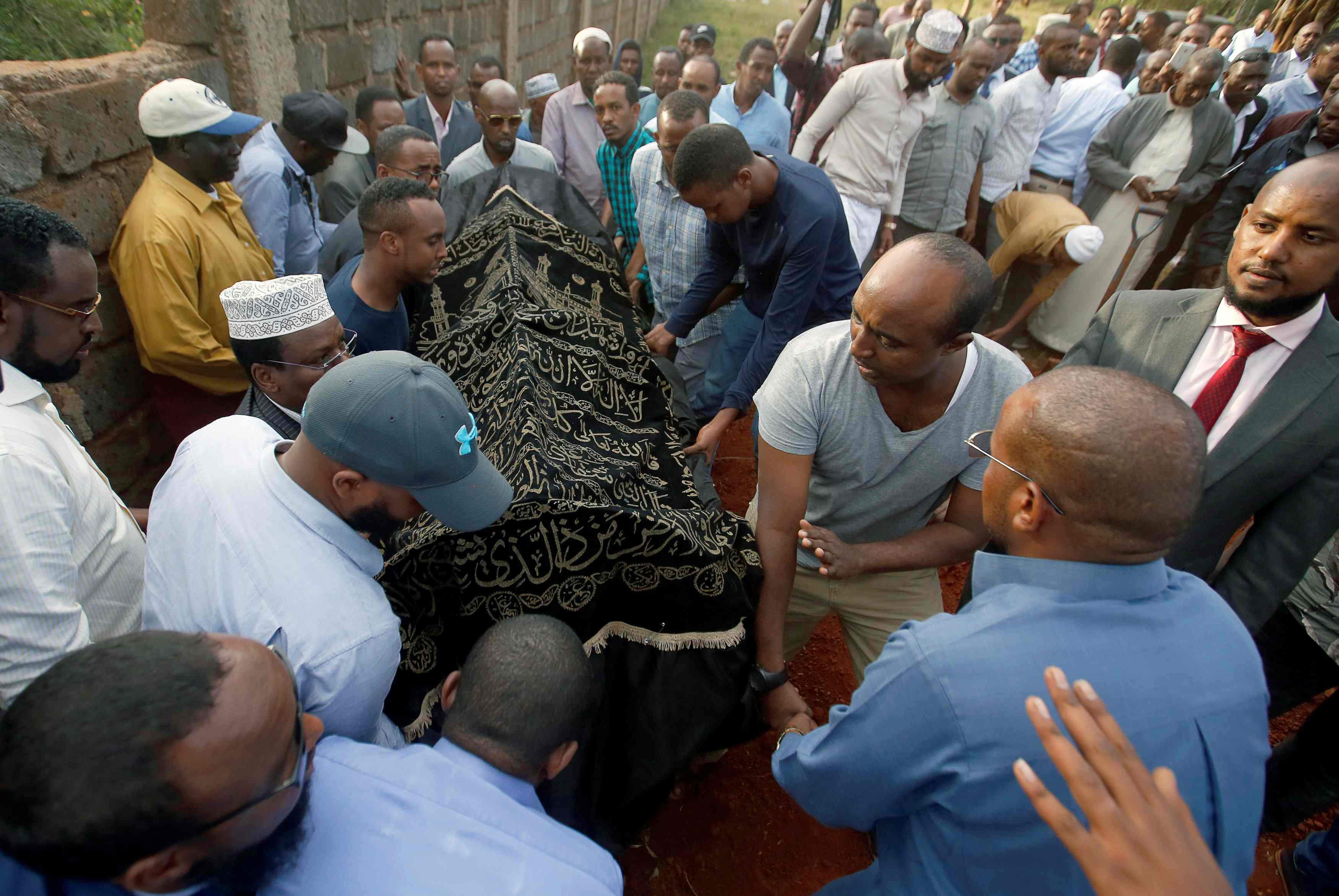 People carry the coffin of Feisal Ahmed Rashid who was killed in an attack on an upscale hotel compound, at the Langata Muslim cemetery, in Nairobi, Kenya, January 16, 2019. /Reuters Photo

People carry the coffin of Feisal Ahmed Rashid who was killed in an attack on an upscale hotel compound, at the Langata Muslim cemetery, in Nairobi, Kenya, January 16, 2019. /Reuters Photo

Updated at 3:35 p.m. BJT
Kenya's President Uhuru Kenyatta gave a statement about the Nairobi attack on Wednesday.
In his statement, he said, "All terrorists have been eliminated, 14 people are confirmed dead and over 700 civilians evacuated to safety."
Reuters reported earlier that the death toll was 15 for the Kenya terror attack.
Updated at 9:58 a.m. BJT
Gunfire and blasts were heard as authorities tried to evacuate survivors at the DusitD2 complex, according to Reuters.
The complex, which houses several multi-national offices and hotels, is located in the leafy Riverside area of Westlands, Nairobi.
Updated at 9:31 a.m. BJT
By 1 a.m. local time (2200 GMT), 15 bodies had arrived at Chiromo Mortuary and more were expected, an attendant told Reuters.
Identification papers indicated that 11 were Kenyan, one was American and one was British. The other two were not carrying documents. A U.S. State Department official confirmed one of the victims was American.
Al-Shabaab, a Somalia-based terrorist group, claimed responsibility for the attack.

How did the attack unfold?

About four gunmen armed with rifles and grenades drove to 14 Riverside Drive at around 3 p.m. and staged a deadly attack, leaving a trail of destruction.
Police said the gang arrived at the entrance of the DusitD2 hotel and alighted before one of them started to shoot aimlessly.
It was at that point that one of the attackers lobbed a grenade at three cars that were parked at the main barrier, setting them on fire. They were burnt to ashes.
The terrorists then proceeded to the main hotel lobby where one of them detonated an explosive device he had on his body. His limb was blown out of the lobby to the main corridor about 40 meters away. 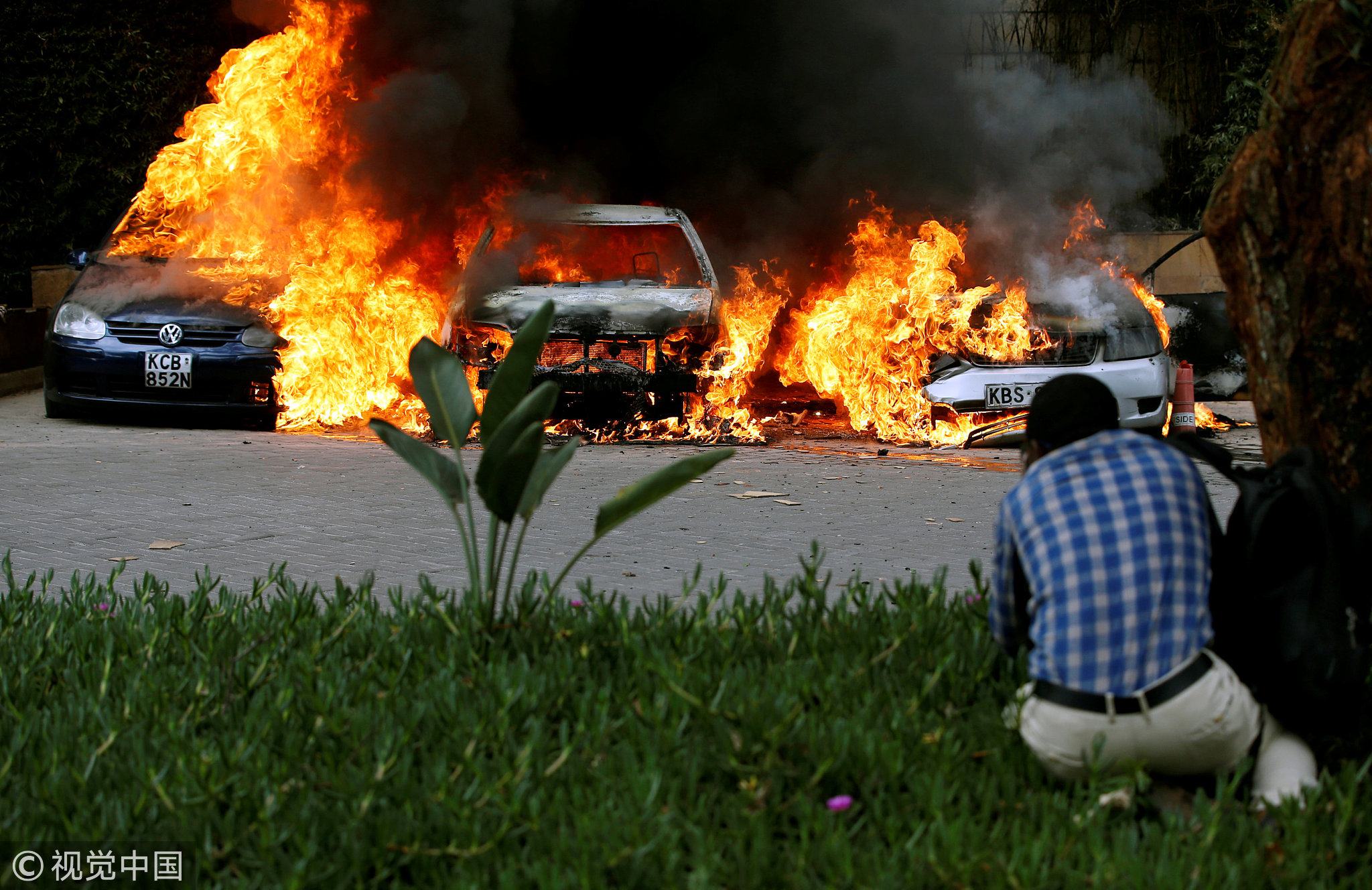 Cars are seen on fire at the scene of explosions and gunshots in Nairobi, Kenya, January 15, 2019. /VCG photo

Cars are seen on fire at the scene of explosions and gunshots in Nairobi, Kenya, January 15, 2019. /VCG photo

Interior Minister Fred Matiang'i said at 11 p.m. (local time) that all buildings had been secured and scores of people had been evacuated. But he did not comment on the attackers' whereabouts and said security forces were still “mopping up.”
UN Secretary-General Antonio Guterres on Tuesday condemned the "terrorist attack," extended his condolences to the families of the victims and wishes those injured a swift recovery.
For more earlier updates:
Gunshots and an explosion rock business complex in Kenya's Nairobi
9225km
Source(s): Reuters ,Xinhua News Agency