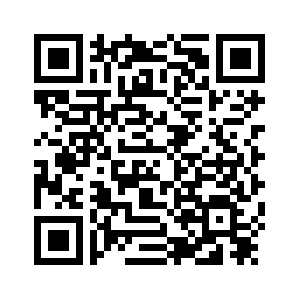 Depleting groundwater resources coupled with poor water management, growing population and climate change are pushing Iran toward a water crisis that threatens not only its newfound agricultural self-sufficiency but may also dampen its energy exports – two sectors that are critical for Tehran to withstand any further economic sanctions, according to analysts.
Experts also predict that if not contained, the water crisis could also displace over 50 million people across Iran in the next 25 years.
"Iran recently became a net exporter of the strategic crop wheat, which Tehran sees as key to maintaining food security. Yet, a growing water scarcity crisis threatens this self-sufficiency, which Iran values as part of its 'economic resistance' to sanctions," Tamer Badawi, a research fellow at the Istanbul-based Al-Sharq Forum, stated in a recent report for the global think tank Carnegie Endowment for International Peace.
"Water scarcity, brought on by a combination of climate change and mismanagement, could force Iran to import considerable amounts of wheat in the coming years. The water crisis could not only affect agricultural exports but also electricity exports to neighboring markets due to reduced hydroelectric production," Badawi argued.
Official data show that about 92 percent of water is used by farmers with a mere 30 percent efficiency, which pales in comparison to 75 percent in most other countries. The agriculture sector accounts for a mere 10 percent of national GDP. 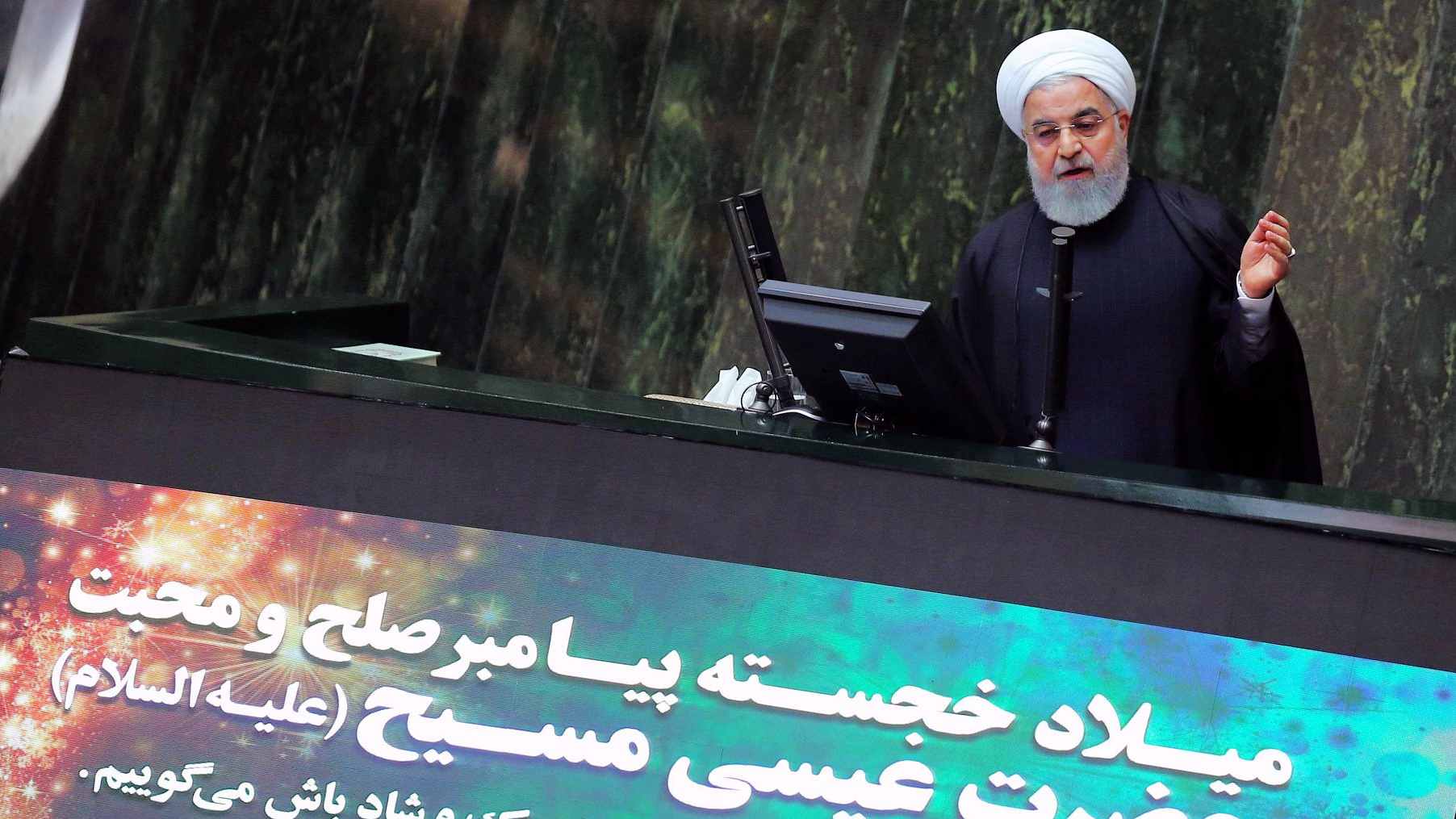 Iran's President Hassan Rouhani speaks at parliament in the capital Tehran on December 25, 2018, as he presents his government's 2019-2020 budget, with a notice below his podium showing Christmas greetings. /VCG Photo

Iran's President Hassan Rouhani speaks at parliament in the capital Tehran on December 25, 2018, as he presents his government's 2019-2020 budget, with a notice below his podium showing Christmas greetings. /VCG Photo

It was not surprising, therefore, when Iranian President Hassan Rouhani, in his last public address of 2018 on Monday, called for a drastic reduction in water consumption, particularly in the agricultural sector, emphasizing the crucial role water and electricity plays in the economic security of the country.
Stressing that the current nationwide water wastage rate of 30 percent is unacceptable, Rouhani set an urgent target of 10-20 percent reduction in agricultural consumption of water by using new methods and technology.
"Water is indeed crucial for protecting livelihoods, human well-being and sustainable socioeconomic development," the Iranian President said during a visit to the National Grid Dispatching (NGD) department, a subsidiary of Iran Grid Management Company, in Tehran, according to IRNA news agency.
"Judicious water consumption is a must for sustainable development," he stressed, noting that reducing wastage from across the national supply chain can partially tackle the worsening crisis.
Rouhani highlighted the importance of greenhouse farming and modern irrigation systems, saying, "If we reduce agricultural water consumption by 10 to 20 percent a year, it will have good effects.” 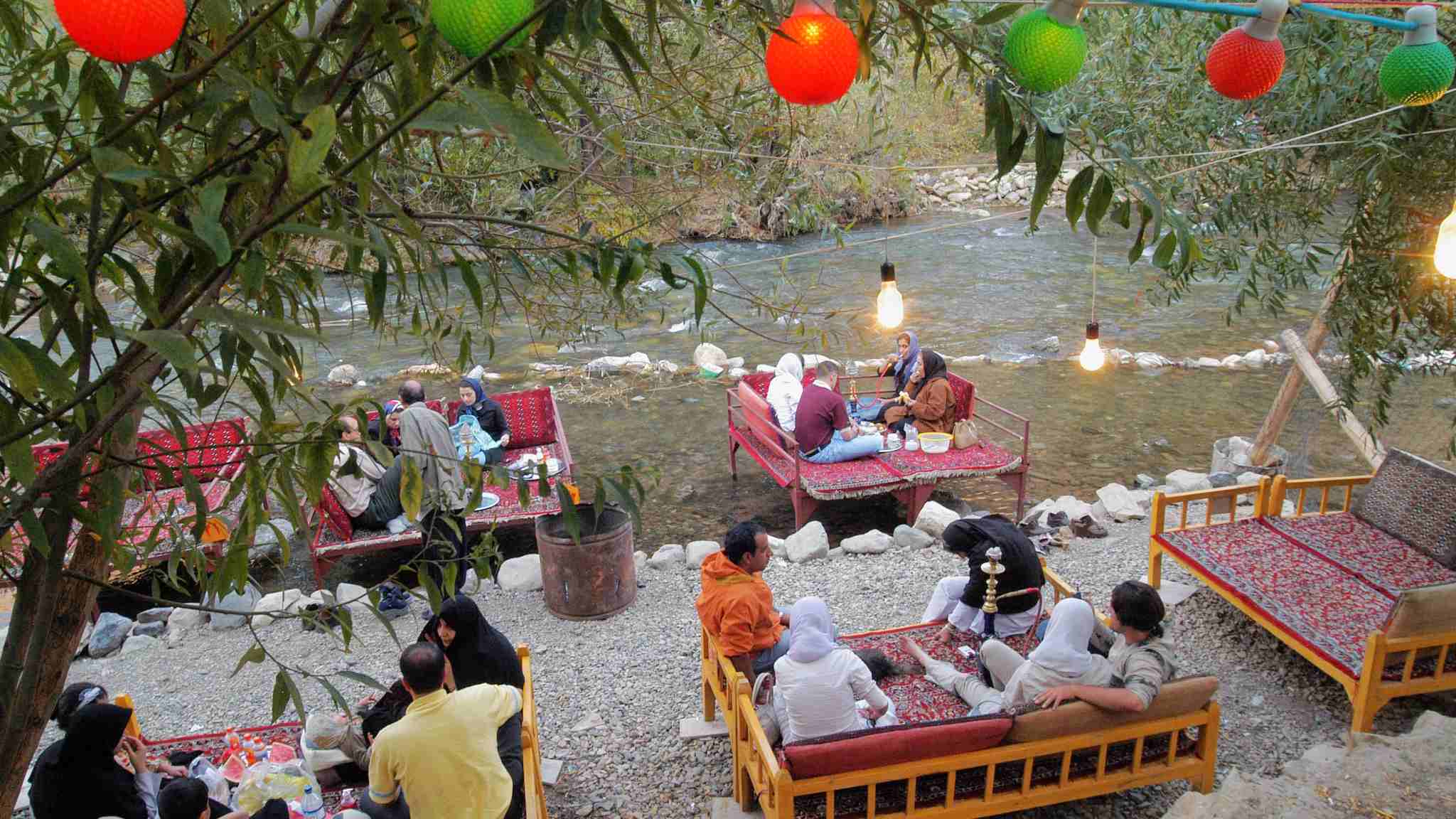 Iranians relax on wooden benches and divans by the riverside in Zardband, Iran, in October 2003. /VCG Photo

Iranians relax on wooden benches and divans by the riverside in Zardband, Iran, in October 2003. /VCG Photo

Iran's Energy Minister Reza Ardakanian, who is an accomplished water scientist and author of several books and academic papers on water resources management, counted "climate change and demographics" among the reasons behind the critical water situation.
"In the past four decades, several factors, including high population growth and unregulated agriculture, have made a bad situation worse," he was quoted by IRNA as saying.
Ardakanian felt that poor water management along with the effects of extreme weather, growing populations and rising demand have put key river basins in the Middle East at risk.
Since 1979, Iran's population has more than doubled to over 80 million people, with over a 60-percent young population below the age of 25. With nearly 35 percent of the population hit by frequent drought, Isa Kalantari, head of Iran's Department of Environment, predicted that Iran's water crisis could displace over 50 million people in the next 25 years.
"This issue hugely impacts families who, for generations, have relied on agriculture in order to make a living in rural societies. They have been forced to move to Iran's urban centers, where societal norms and ways of life are often in juxtaposition to their previous rural living," Nikta Khani, institutional development fellow – initiative on forced migration and human trafficking at Boston University, stated in her report for the Washington D.C.-based Center for International Private Enterprise
"Iranian policymakers must seriously commit to better water management if there is any hope of recovering from this crisis. Water rationing programs have already been implemented in cities such as Tehran, since 2001. However, water infrastructure requires further investment and updating, as one-third of potential water supplies are lost due to leaky pipelines across Iran," she added. 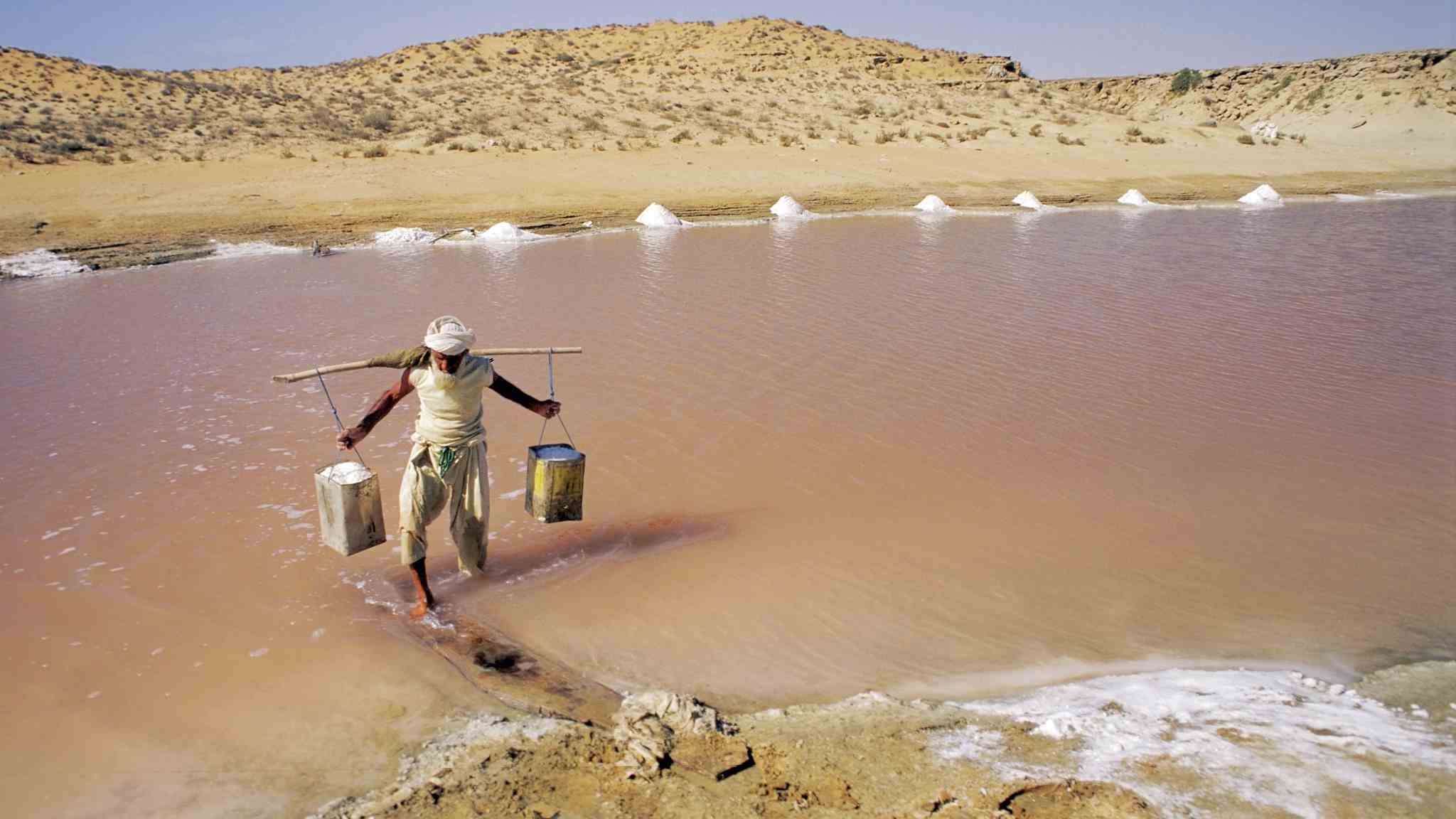 Persistent drought and dwindling water resources has led to Iran facing a constant shortage of water for nearly five decades now. Low rainfall due to climate change in recent years has added to the already dire situation, with dams and reservoirs witnessing a steep fall in water reserves. For instance, Iran's dams saw a replenishment of about 25 billion cubic meters (BCM) of water in 2018, a 33-percent decrease from the 32 BCM the previous year.
Badawi predicted that with decreasing rainfall, farmers will increasingly rely on alternative sources of water for irrigation, including "illegal wells," which could forestall the government's efforts to reduce dependence on underground reservoirs.
"In response to the problem of water consumption, the government is increasing the number and capacity of desalination plants along the Persian Gulf. While this currently goes mostly toward industrial use, it can be expanded to sustain agricultural self-sufficiency," stated Badawi.
However, transporting desalinated water inland – which requires pumping it to high altitudes - is energy-intensive and therefore highly costly. According to one report, if farmers in central Iran started using desalinated water to grow 10 percent of their wheat, it would require approximately 10 percent of the country's natural gas consumption to get it there, he explained.
The situation would create a new dilemma for Iran. "If it expands wheat production by using more desalinated water, the increased use of natural gas limits Iran's long-term ability to export it to neighboring countries such as Turkey, Iraq (which currently relies on Iranian natural gas to produce 45 percent of its electricity), and further planned exports to Oman," Badawi argued.

Protest on the rise 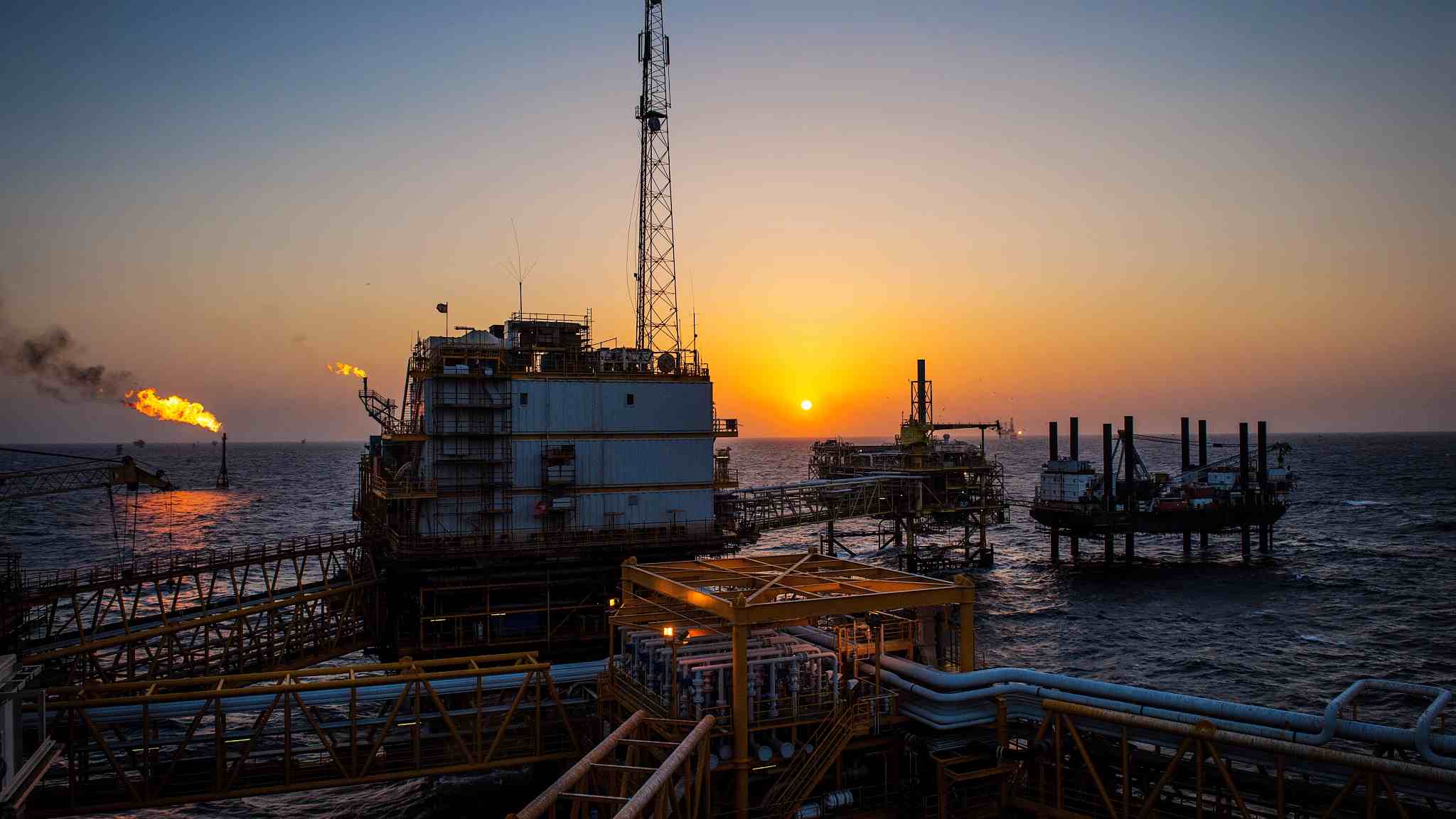 Meanwhile, Iran has been witnessing a rising number of protests over water-related issues in recent years, including significant demonstrations in southwestern Khuzestan Province in February 2017 and then in June-July 2018.
Farmers in the central Iranian province of Esfahan protested in November 2018 against the government's "mismanagement" of water pipelines earmarked for irrigation.
And last month, all 18 lawmakers representing constituencies from Esfahan resigned collectively to protest the government's decision to cancel funding for all water projects in the province, allegedly because of financial limitations.
Political and economic unrest due to Iran's water crisis has had massive regional implications as well, according to Khani.
"Iran shares water resources with 12 neighboring countries, and Iran's water crisis has led to direct incidents of violence at its borders with Iraq and Afghanistan. In June, protests over poor water quality shook the southwestern borders of Iran. Trade and economic projects have slowed down between Iran and its neighbors because of such outbreaks," she stated.
According to the Middle East Institute, Afghanistan's agricultural output has declined by 45 percent. The Afghan government plans to build a dam near its border with Iran, in order to increase temporary water supply to farmers in Afghanistan to mitigate the economic effects of water scarcity. This will exacerbate the water crisis for Iranians who inhabit this border area.
"Tensions over dams between Iran and Afghanistan have escalated and are said to have potential for escalating to military action. This has led to Iran suspending energy exports to Afghanistan," Khani remarked.
Iran is in urgent need for a solution to its water crisis to ensure that the country's vital agriculture energy sectors remain unhindered while urban migration is contained at a manageable limit even as the country prepares to face new U.S. sanctions.
(Cover: A dead pistachio tree at a field in an abandoned village, which farmers left behind due to the lack of water, near the southern Iranian city of Sirjan, on August 14, 2016. /VCG Photo)
5603km