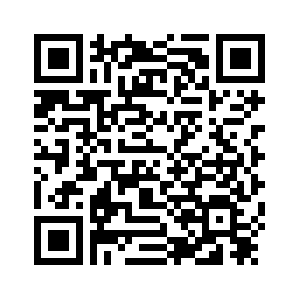 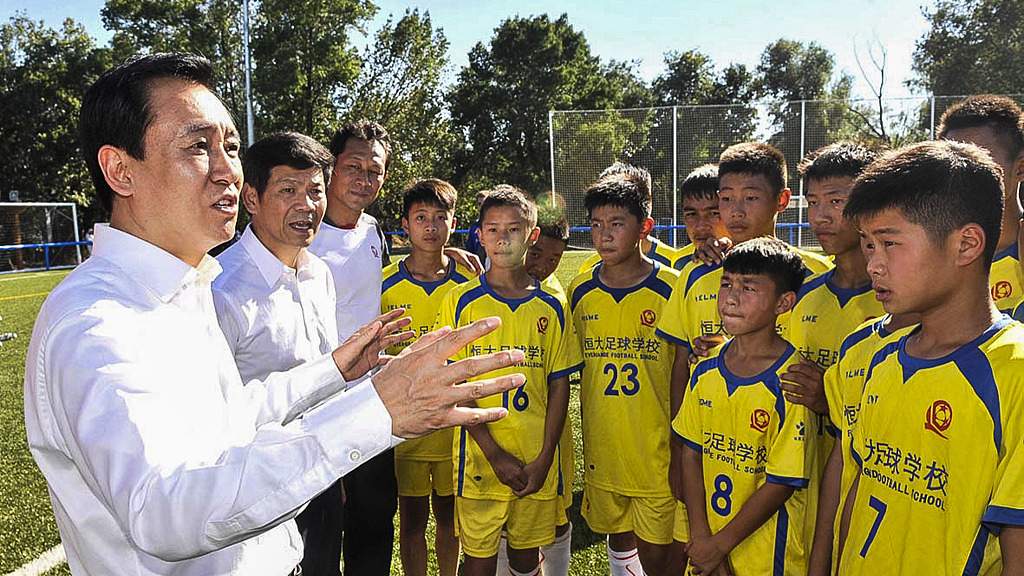 Evergrande Football School, which was recognized as the largest residential soccer academy by Guinness World Records in 2015 with 2,577 students enrolled at the time, has entered its ninth year in 2019.
Funded by Evergrande Group and having the original aim was to find new blood for the Chinese Super League seven-time champions Guangzhou Evergrande.
In recent years, in order to keep up with the changing environment caused by China's soccer reform, the school has converted its development idea from accepting ordinary children to just recruiting talented candidates to be more professional. 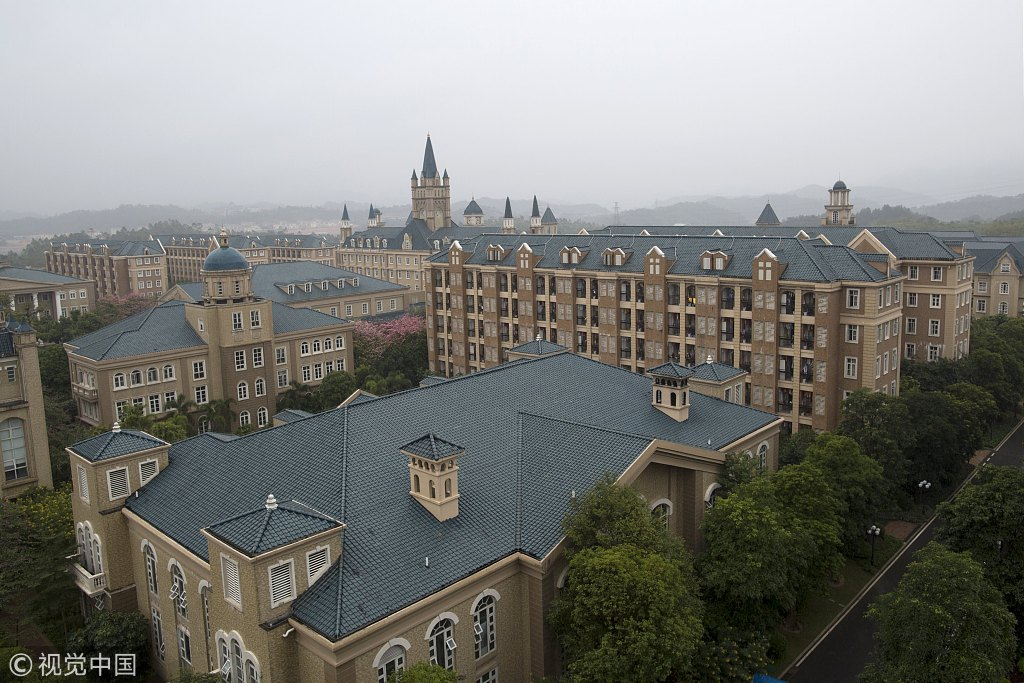 Evergrande Football School's headmaster Wang Yajun told Xinhua News Agency that, when Evergrande entered China's soccer area, they knew that the soccer population was few and the excellent young players were extremely rare. Thus, the aim of the soccer feature school was to expand the soccer population.
The school once had about 2,800 students and has a branch in Spain.
The children basically study in China for five years, and the best 25 of over 13-year-olds will attend further education in Madrid's branch for another five years.
"After eight years, Evergrande's youth training starts to yield results, as graduates like Bugelahan, Cai Mingmin and Luo Hanbowen went to the Evergrand senior side first squad, and Zhang Linyan, who was born in 2001, was selected to the China National Women's Soccer Team last year and played formal matches," Wang said.
"We thought our domestic-overseas development model corresponds to the rules of training Chinese young soccer players. Generally, Chinese children's soccer base and consciousness are weak. For physical quality and confrontation ability, Spanish soccer style matches well with Chinese players."
Wang added, "We brought up more than 3,000 students of different levels. Even if they quit professional soccer and go back to their hometown, they will help the development of local campus soccer to lift China's general soccer level up." 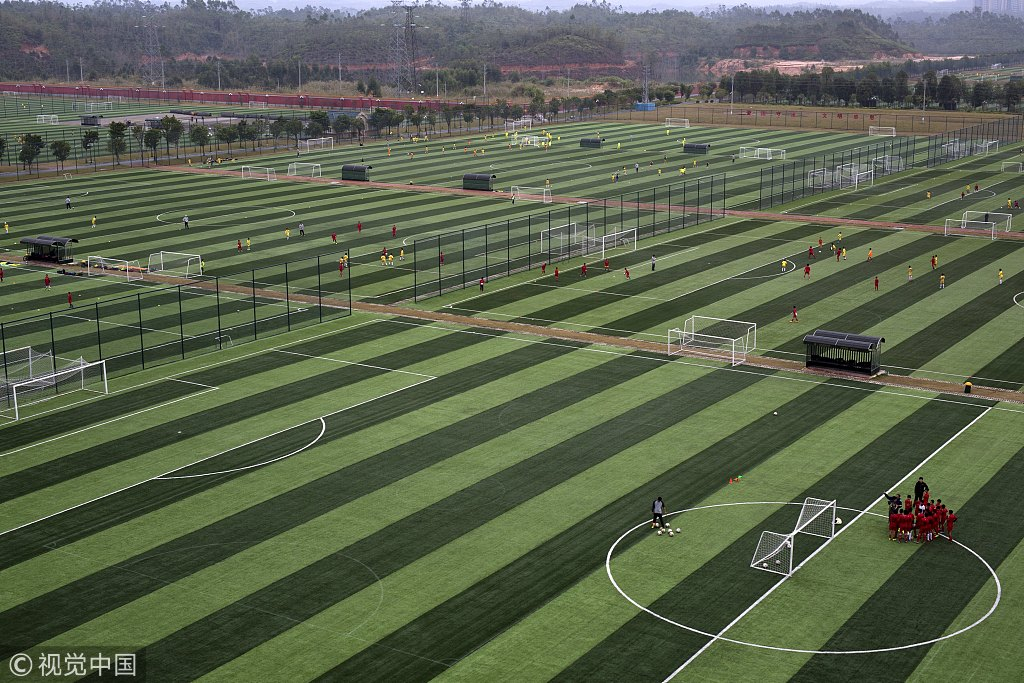 Since 2018, Evergrande Football School executed "All-free schooling policy," in favor of cultural course study, training, competition and basic living necessities.
Free schooling means cost increases.
"It is estimated that one student would spend over 500,000 Chinese yuan every year, and the investment in training and competition is the biggest part," Wang said.
The shortage of competition, especially high-level matches, is one of the obstacles for Chinese soccer's development. Therefore, Evergrande Group launched the international soccer championships since 2018, inviting under-17 level's mighty squads from all over the world to take part in the event and give Chinese young players the opportunities to learn from world-class youth teams.
Each year, there are at least 40 matches waiting Evergrande young players, and they are well rewarded by Evergrande Group. For now, the winning rate of Evergrande Football School's all squads is around 55 percent, suggesting that the training has a good effect. 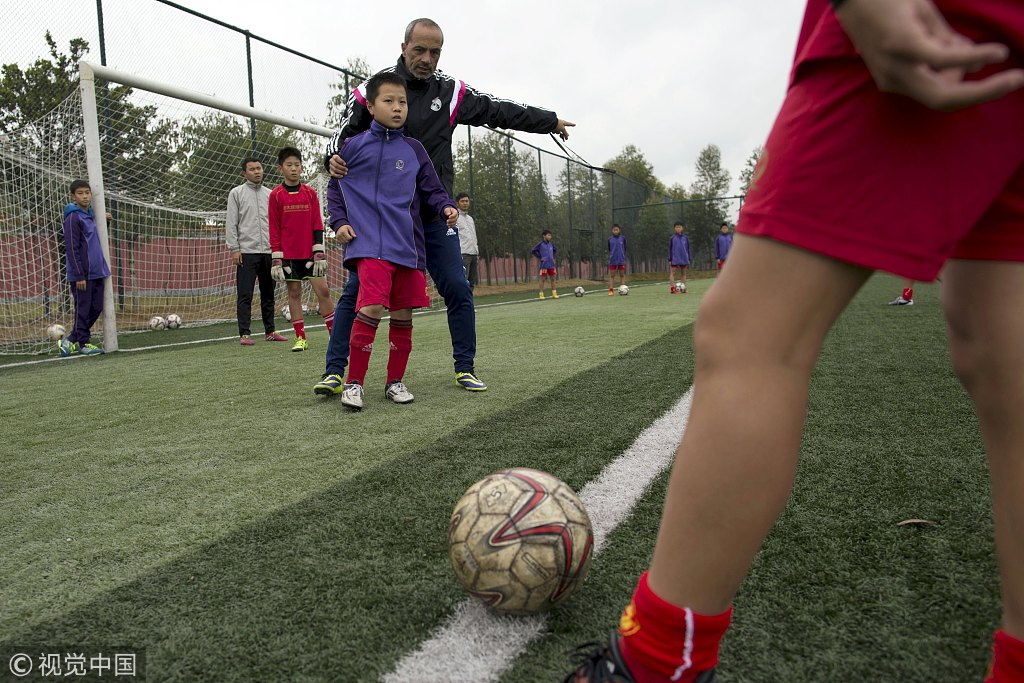 Being eliminated from the first squad is not rare in Evergrande Football School, but some children choose to stay there while others leave the school. That invisibly intensifies the competition among the students.
Zhao Yueming from Beijing is the captain of the 2008-born group. He changed his position from forward to center back after entering the school. In the beginning, he didn't like to play in this position, but he is gradually getting used to it.
Zhao is tall and strong, good at one-on-one battles and vies for the header. Additionally, he has the ability to score long-range goals, and is a mainstay in the squad for the moment.
However, Zhao is still worried about keeping the core-player identity. That's maybe why he cannot stop playing soccer in his spare time, and watches nonstop CCTV's "Total Soccer" program.
Zhao's mother, who accompanies him to learn, has the same concern, as once there are other children taking the trails, she fears they will threaten her son's position. 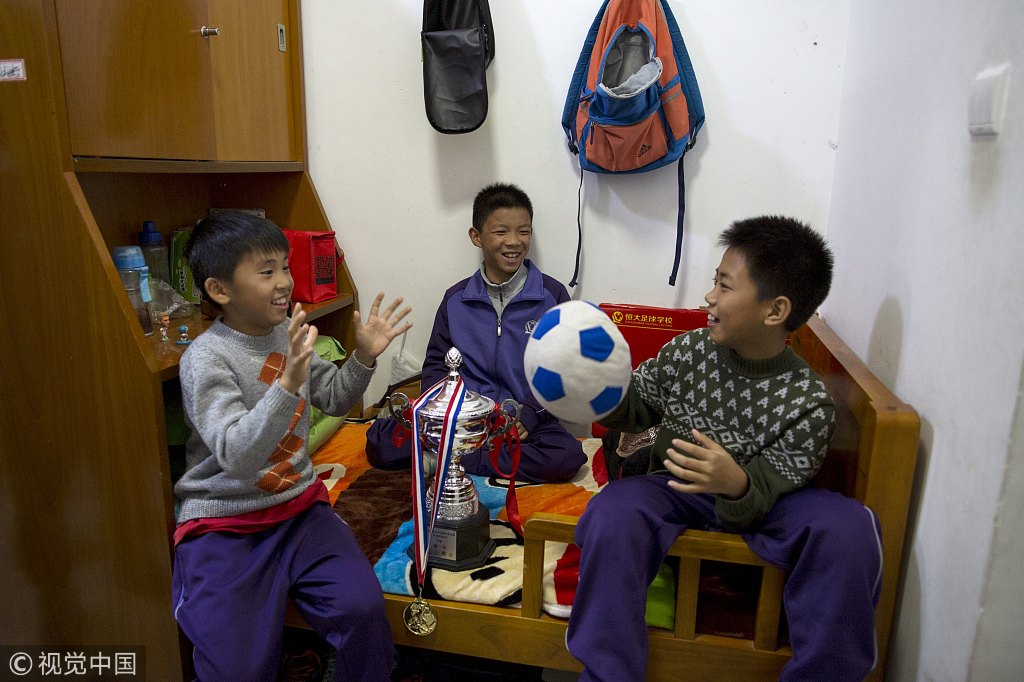 The students in Evergrande Football School don't just follow soccer training, but also cultural education.
The school is cooperating with Wuhan University of Science and Technology to build a soccer college, and students could have opportunities to apply to some of the domestic universities and foreign universities' preparatory courses.
Besides the coaches from Real Madrid, the school has about 160 culture course teachers. Some of the teachers have soccer playing background and can make students understand normal courses well by combining soccer knowledge.
Liu Zhenhua, the English teacher there said, "The children who play well have better cultural grades. And our students' English marks are similar to those of the ordinary schools' students in the same area where our school locates."
However, the soccer school's children sometimes cannot accomplish courses due to competitions, and the school dispatches teachers to accompany them to study when they are in groups and out for over ten days. That discipline improves the learning ability and time managing ability for students.
"My son told me, if he couldn't launch a professional career, he could still be a coach, referee and commentator," Zhao's mother said.
Source(s): Xinhua News Agency