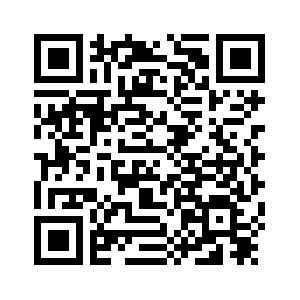 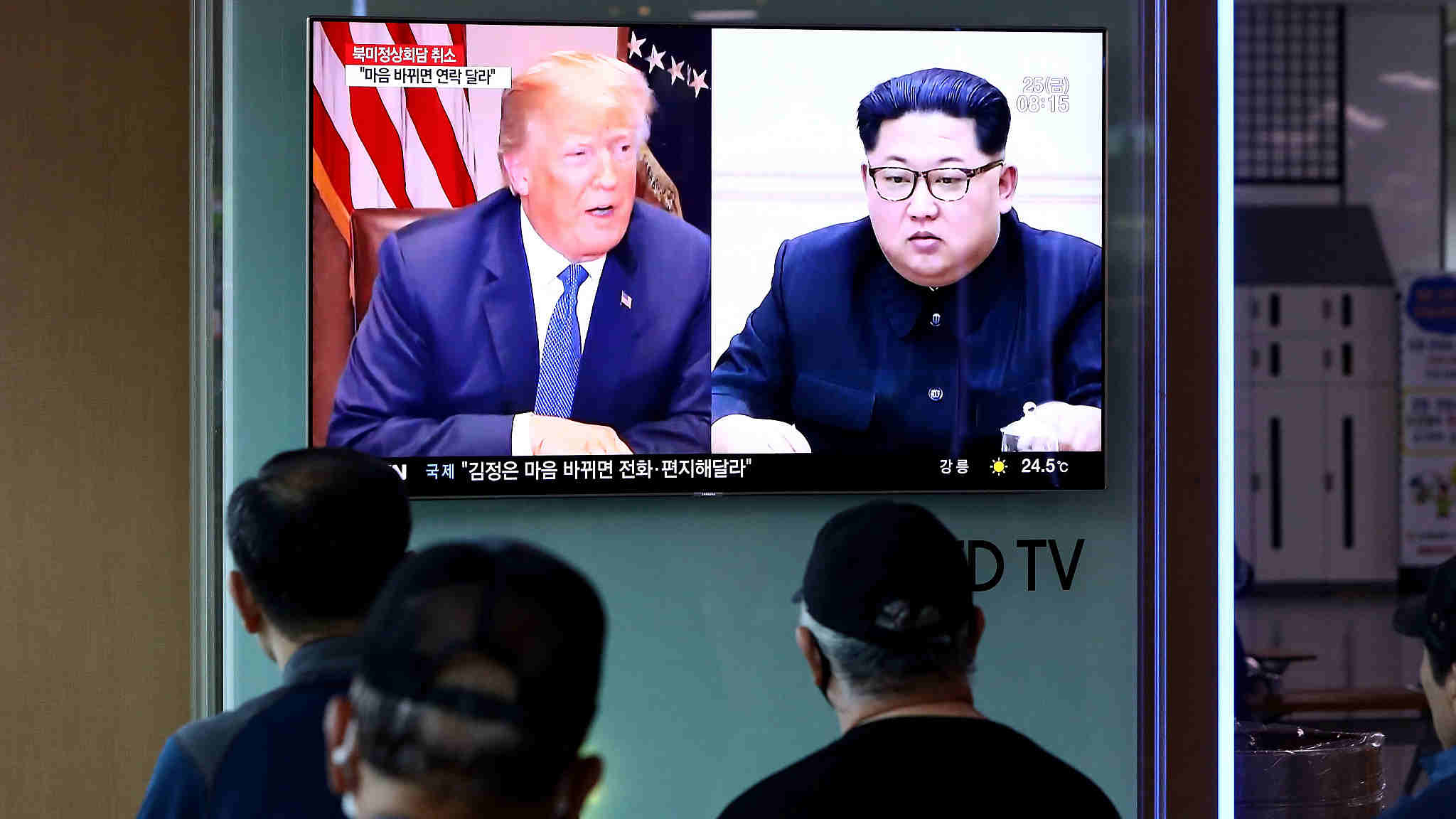 Editor's note: Harvey Dzodin, a former legal advisor in Carter administration, is a research fellow at the Center for China and Globalization. The article reflects the author's opinion, and not necessarily the views of CGTN.
On. Off. On. I’m not nervously flicking a light switch but summing up the recent twisted path lurching forward to an unprecedented summit between DPRK leader Kim Jong Un and US President Donald J. Trump, two of the most unpredictable and idiosyncratic leaders on the planet. After last week’s letter from Trump to Kim canceling the June 12 meeting in Singapore between the two, after the DPRK’s uncharacteristically mild, almost plaintive reaction, furious preparations are again ongoing for it. Despite the huge gap between the two leaders, and against all conventional thinking, I am cautiously optimistic about progress taking us a few steps back from the nuclear precipice.
We’ve been down this road before with Kim’s father and the US and others. The Agreed Framework and lengthy six-party talks ended acrimoniously so to be optimistic about a settlement or even substantial progress may just be wishful thinking – the triumph of hope over experience – but this time could well be different. 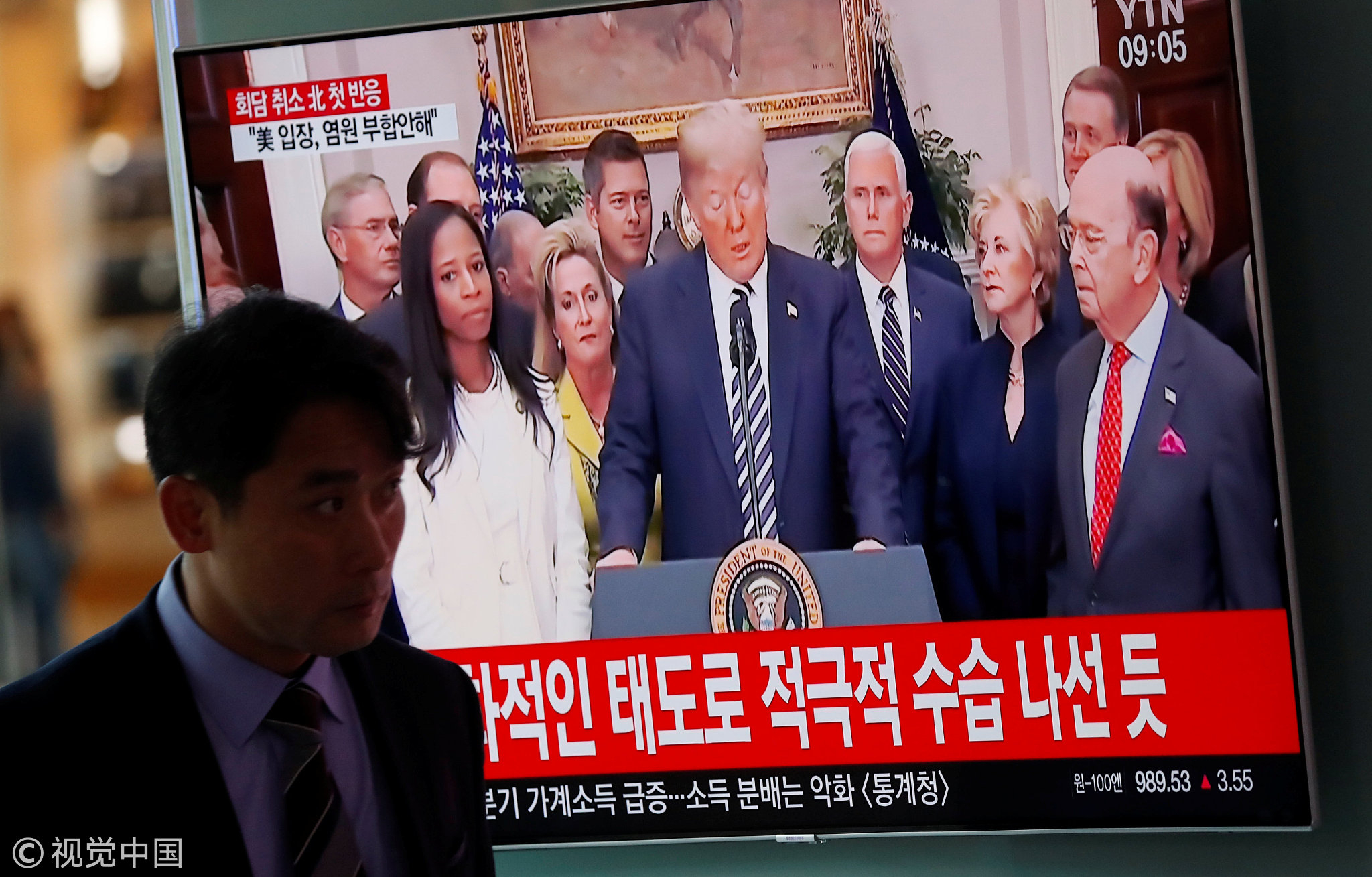 People watch a TV broadcast of a news report on a canceled summit between the US and DPRK, in Seoul, on May 25, 2018. /VCG Photo

People watch a TV broadcast of a news report on a canceled summit between the US and DPRK, in Seoul, on May 25, 2018. /VCG Photo

Why? Trump’s a gambler. He’s all impulse and 180 degrees removed from intellectual. He really, really covets the Nobel Peace Prize the way he covets trophy wives, and winning it would, in his mind, negate the Nobel awarded to Barack Obama early in his presidency.
Kim doesn’t seem into these but he is very much into achieving the mouthwatering possibility not only of international respectability but of delivering economic progress to his people to a degree impossible for him to realistically contemplate a year ago. Although there’s not a Nobel for his astonishing actions since the beginning of the year, if there were a global prize for biggest PR coup of the year, Kim would be the hands-down winner.
Kim also knows that despite his harsh government’s efforts to cynically portray his country as a socialist paradise to his own people, thumb-drives and DVDs show his population that the opposite is true in S. Korea, the US and elsewhere. He’s also been flexible enough to allow experimentation with private enterprises and to see the resulting significant positive impact on his economy. 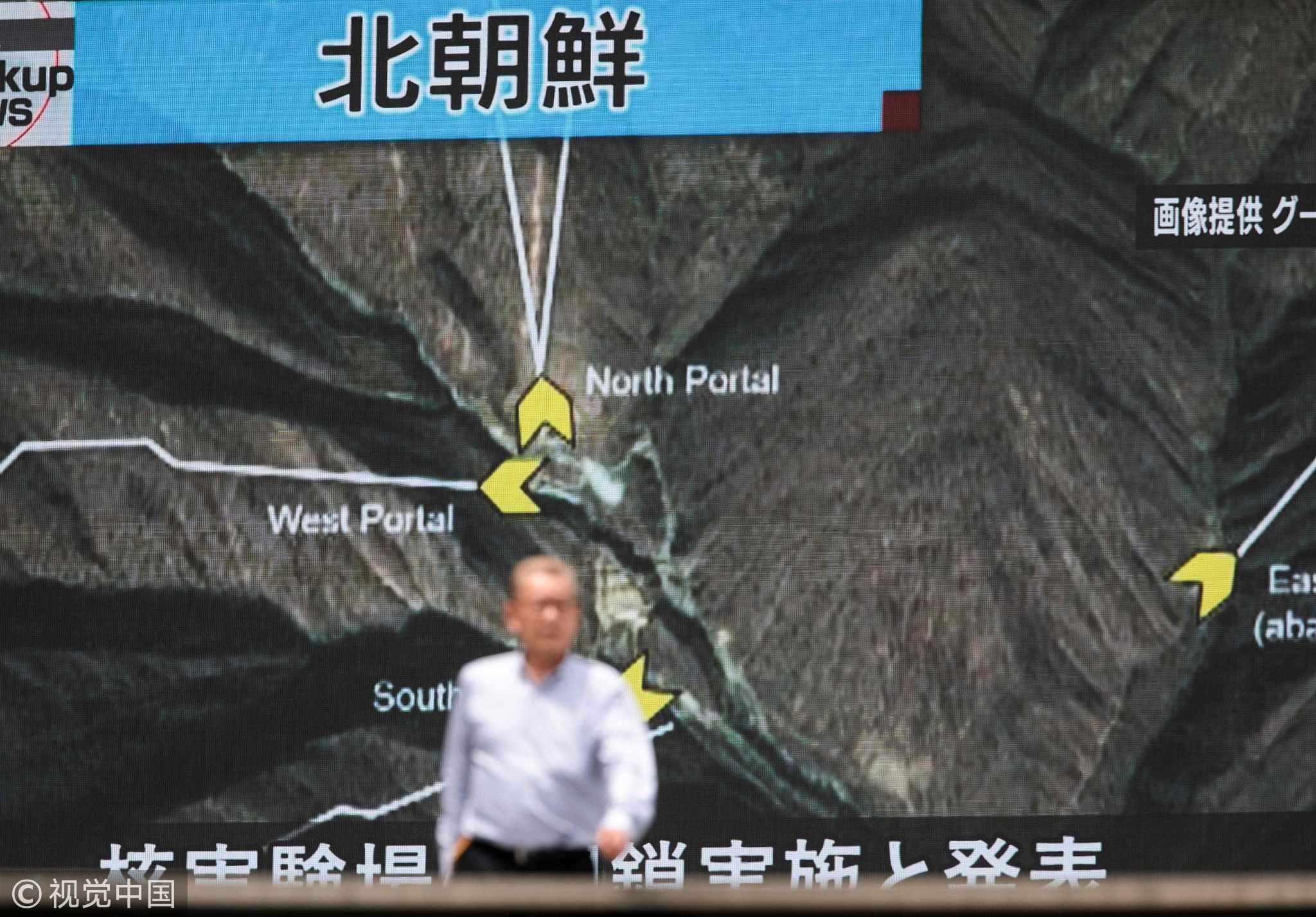 A pedestrian walks in front of a screen in Tokyo on May 25, 2018, showing a map of the DPRK's Punggye-ri nuclear test site. /VCG Photo

A pedestrian walks in front of a screen in Tokyo on May 25, 2018, showing a map of the DPRK's Punggye-ri nuclear test site. /VCG Photo

On March 8, when he first accepted Kim’s invitation to meet, it seemed like Trump would “prepare” for it by doing little or nothing as has been the case with other leaders he has met during his presidency. It’s because, as he has said, "no one is smarter than he is." However, to the astonishment of many, he seems to be letting experienced diplomats organize and preliminarily negotiate.
So once again the devil’s in the details.
If the US side, à la John Bolton and Mike Pence, insists on complete and immediate denuclearization of the DPRK and the scrapping of all DPRK nuclear weapons, production facilities and nuclear-capable missiles, this could be the first and last meeting and a once-in-a-lifetime lost opportunity to step back from the edge of the nuclear cliff.
If, however, both sides engage in confidence-building, then there’s a possibility to give peace a chance.
A good first step is ending the state-of-war that has endured as an uneasy 65-year-old standoff. If the US reduces its troop levels and/or the routine presence of nuclear-equipped bombers on or over the peninsula, eliminates or removes the antimissile THAADs in S. Korea, and/or reduces its joint military exercises with S. Korea, all these would be concrete first steps by the US.
If the DPRK were to take similar measures by decommissioning most of its nuclear weapons and delivery systems under strict verification, that would be a huge step forward. They’d still have one of the world’s largest armies and an abundance of chemical and biological weapons, so they are hardly defenseless.
Under any circumstances, it’s not reasonable to insist that the DPRK entirely eliminate its security blanket of some nuclear weapons. Given the much-discussed Libya model or Trump’s shredding the Iran agreement and clearly violating international law by doing so, no rational actor would put himself at the mercy of others, especially the mercurial Donald Trump.
Let’s hope that the summit goes forward as a first step and new opportunity, not as a single failed event. In that case, we can sleep a lot better and dream of the many mutually beneficial opportunities to come.