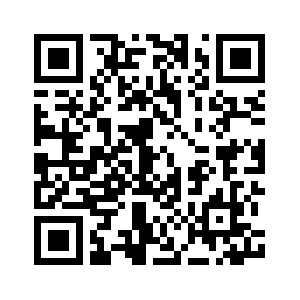 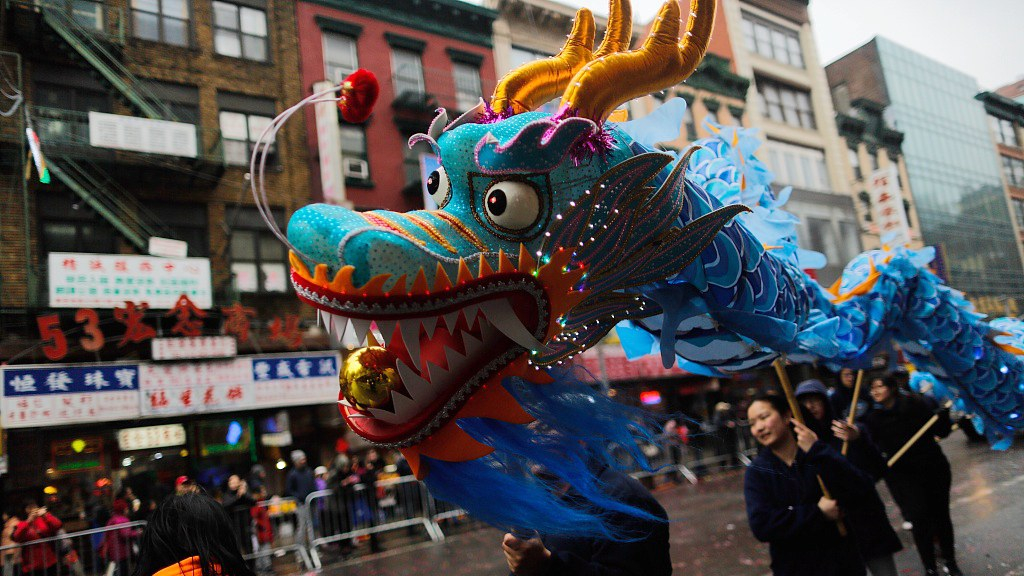 Editor's note: Jia Wenshan is a professor at the School of Communication of Chapman University and a research fellow at the National Academy for Development & Strategy of Renmin University of China. The article reflects the author's opinion, and not necessarily the views of CGTN.
The most important Chinese holiday in the lunar calendar is Spring Festival. The entire festival lasts about 23 days, typically debuting on the last Lunar calendar month December 23 and ending on January 15, the first month of the New Year in the Lunar calendar.
Just like a beautiful long-lasting piece of ceremonial music, Spring Festival consists of four parts – prelude, processional, recessional, and finale. To observe the Kitchen God marks the prelude of Spring Festival when a thorough cleaning of the house is done in preparation for the celebration of the New Year Festival. 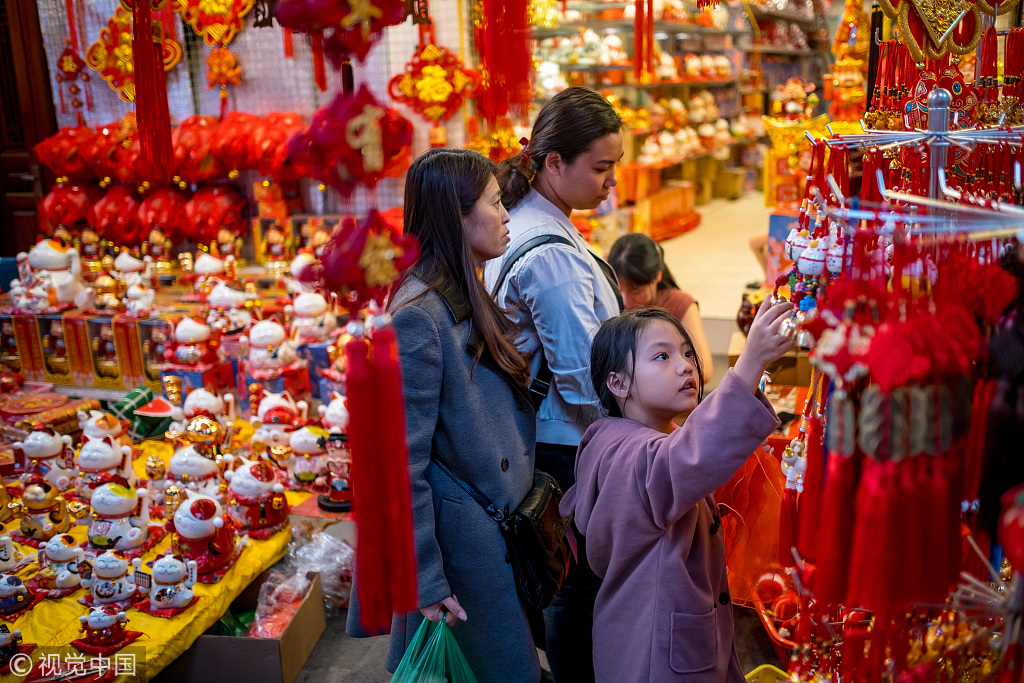 Its processional begins on New Year's Eve which is the last day of the old year. It consists of ritualistic acts such as hanging or pasting red posters of Chinese character couplets on the doors of the house, conveying auspicious meanings or positivity to bring about good luck, playing fireworks to dispel the Ni'an monsters or bad luck away, having the family reunion dinner consisting of an even and lucky number of dishes such as six, eight, ten or more on the table, and watching the CCTV Spring Festival Gala or Chunwan, an annual national pastime which debuted in 1983, till the arrival of the first day of the New Year.
The processional does not stop there. It merely pauses for a short lull of sleep till the morning of the first day of the Spring and the New Year when all family members wake up, wash up and get dressed up in new clothes, deliver auspicious greetings to each other, and have a bowl of rice wine consisting of rice balls symbolizing reunion as breakfast. Kids are given red envelopes of cash by adults.
The rest of the days are spent visiting or receiving relatives, neighbors, and friends. Feasts are hosted by each household in the neighborhood or among friends and relatives on a rotating basis for the first few days of the New Year. Recessional follows in the mood of festivity till January 15, a day of a communal celebration when villagers or townspeople gather together to be entertained by lion dances or dragon dances which mark the Grand Finale of the Festival.

In recent years, however, urban middle-class Chinese have taken an unconventional approach to the celebration of the Lunar New Year. Instead of celebrating the festival in the traditional way as described above, more and more of them travel to foreign destinations in Asia, the U.S., Europe, and even Africa and Latin America.
As these middle-class Chinese tourists are found to spend four or five times as much money as an average tourist of non-Chinese descent during Spring Festival time, top tourist attractions in foreign countries such as Los Angeles, New York, Las Vegas, London and Paris and so on have made cultural adaptations and accommodations such as serving Chinese cuisine, hanging lanterns and providing signs in Chinese in shopping malls and hotels and so on to attract more Chinese tourists. Some of them even host lion or dragon dances.
During the past several years, Los Angeles and Paris, for example, have each hosted 7,000 Chinese tourists during the Spring Festiva. With Chinese tourists going global, the Spring Festival goes global with them as well. 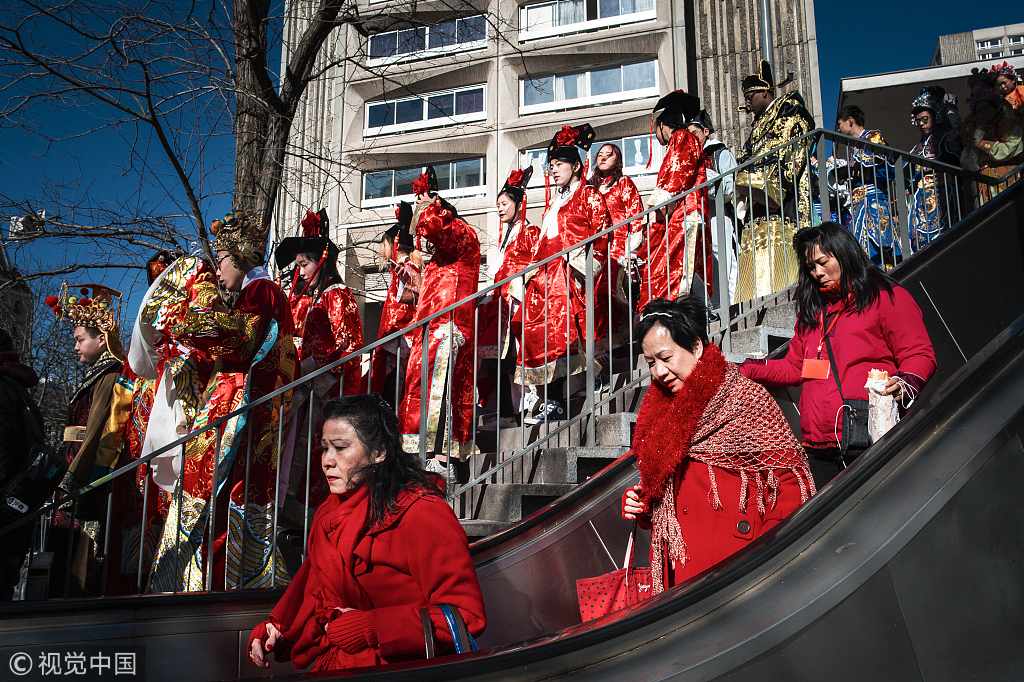 The Spring Festival is also gaining popularity in the U.S. despite the anti-China sentiment orchestrated by a few hawkish populist politicians in the U.S. in recent years. The celebration of the festival has been around in the U.S. for more than two centuries since the arrival of the first wave of Chinese immigrants as railroad workers on the trans-continental railroad such as the Central Pacific Railroad around 1815.
Since then, Spring Festival has been merely an ethnic holiday within Chinese/Asian-American families, Chinese/Asian American communities such as Chinatown/Koreatown. Americans who are non-Chinese/Asian would get to know about the Lunar New Year either in Chinatown or via mass media such as the film Joy Luck Club.
During the past several decades, especially during the past ten years after China became rich and prosperous, large numbers of middle and upper-middle Chinese have migrated, especially the U.S., more particularly on the East Coast and West Coast.
To be culturally inclusive and respectful of the population of Chinese/Asian heritage, both New York City and the State of California have designated the Chinese New Year as public holidays.
While New York City public schools were closed for the first time in its history on the day of the Chinese New Year on February 6, 2016 to join the Lunar New Year celebrations, Governor Brown signed the State of California Senate Bill 892 into law and officially designated the Lunar New Year as a state holiday in California in 2018. This bicoastal recognition of the Lunar New Year as a public holiday in New York City and California is one step closer to nationwide recognition.
True understanding can only occur at the level of cultures. In the Year of the Pig which will begin on February 6, 2019, in the Christian calendar, it is hoped that more and more people such as Americans will try to understand China/Asia and people of Asian heritage in their respective countries in terms of their heritage culture. To understand their heritage culture, one is advised to start with an effort to immerse oneself in the celebration of the Lunar New Year. So, to start with, go ahead and join a Lunar New Year parade in cities around the world.
(If you want to contribute and have specific expertise, please contact us at opinions@cgtn.com.)