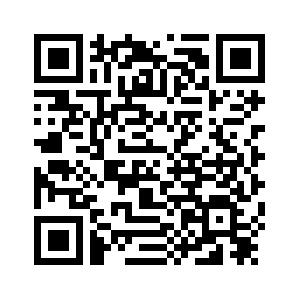 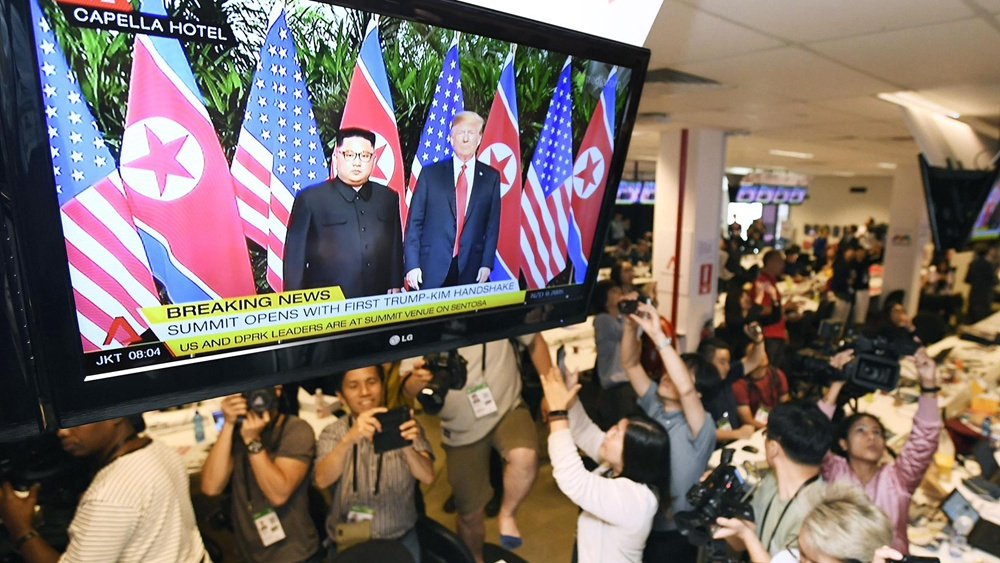 The United States and the Democratic People's Republic of Korea (DPRK) took the "important first step" toward denuclearization and peace on the Korean Peninsula on Tuesday, according to experts, who expressed "cautious optimism" after the landmark meeting between US President Donald Trump and DPRK leader Kim Jong Un in Singapore.
In a four-point joint statement signed by the two leaders, Washington and Pyongyang pledged to "build a lasting and stable peace regime on the Korean Peninsula" and reaffirmed the DPRK's commitment to "complete denuclearization" of the peninsula, without specifying the details and a timetable.
01:12 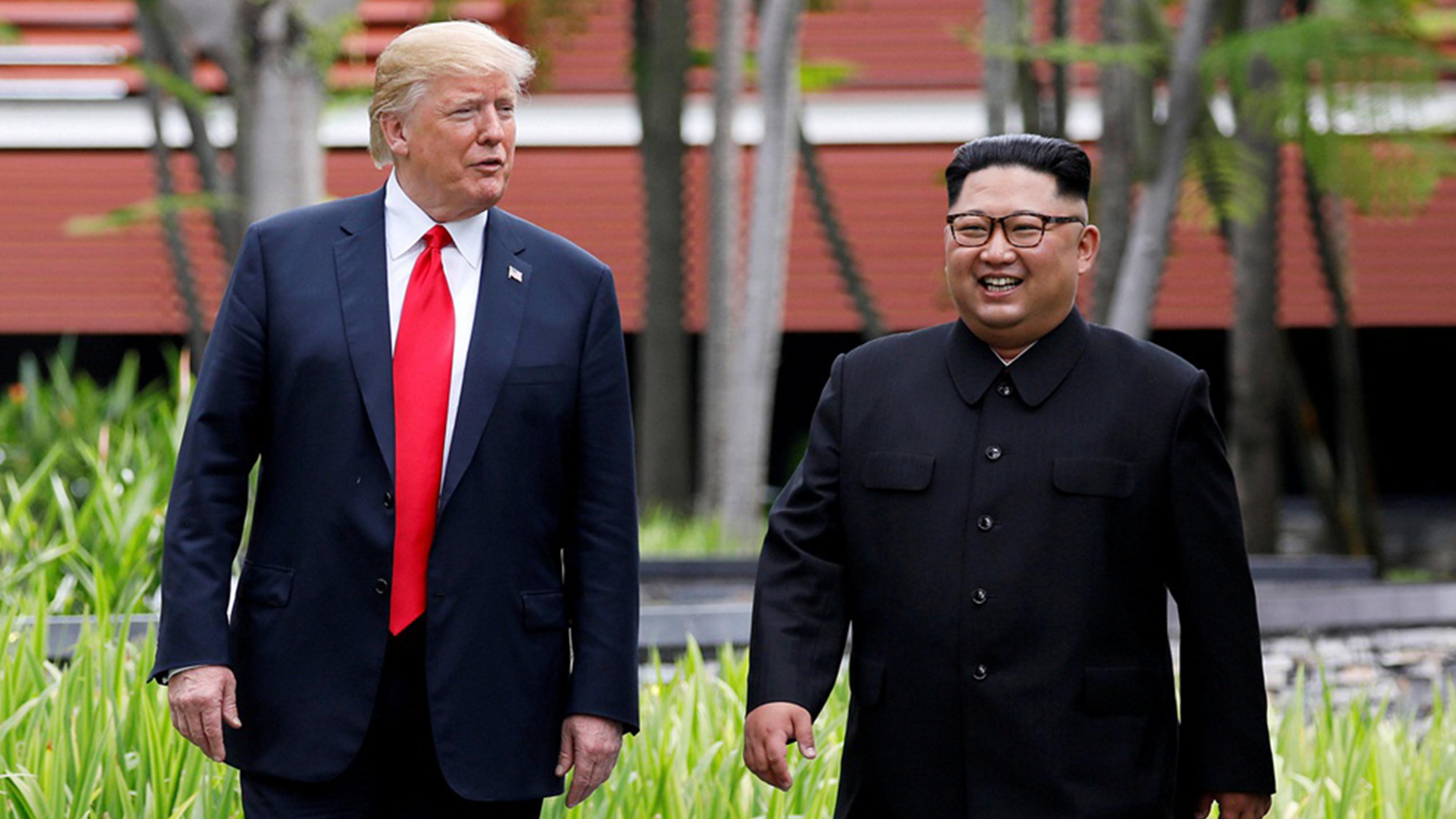 The statement echoed China's call for a "dual-track" approach, which seeks denuclearization alongside establishing a peace regime on the peninsula. Commenting on the summit, the Chinese Foreign Ministry urged the DPRK and the US to implement their leaders' agreement and make the political settlement of the peninsula issue a "sustainable and irreversible" process.

Denuclearization and how to achieve it have been the dominant themes in the DPRK issue. The US has demanded "complete, verifiable and irreversible denuclearization" (known as "CVID") of the DPRK and vowed to maintain "maximum pressure" until that is achieved.
The "CVID" phrase did not appear in the statement signed by Trump and Kim. Instead, it just reiterated the goal of "complete denuclearization" written in the Panmunjom Declaration on April 27.
In the statement, Trump committed to providing security guarantees to the DPRK, while Kim reaffirmed his firm and unwavering commitment to complete denuclearization of the peninsula.
01:10 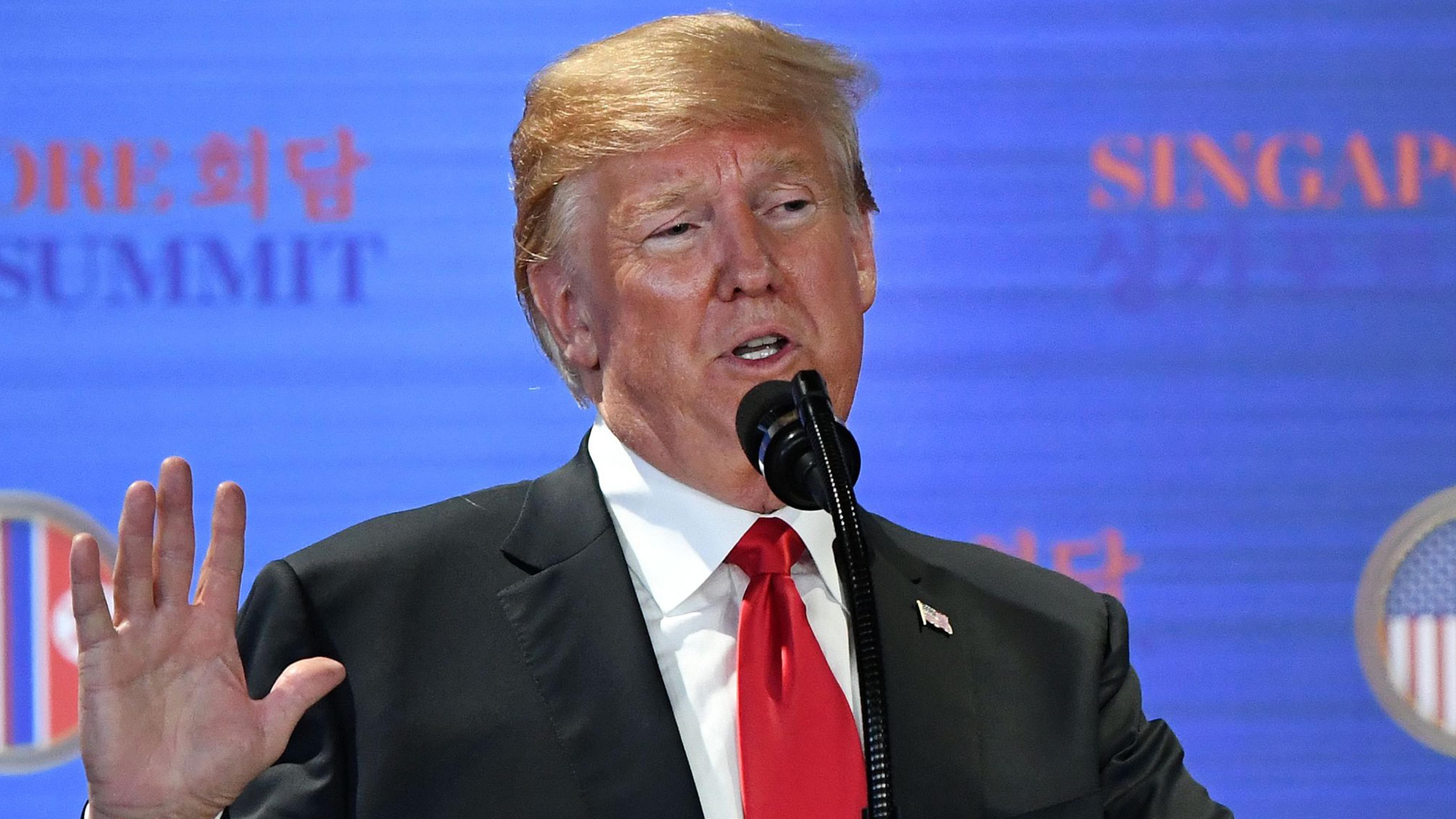 Asked whether there is a timeline for denuclearization, Trump said in a press briefing after the summit that "it takes a long time," adding that he believes the DPRK will start denuclearization "very soon."
"Scientifically – I've been watching and reading a lot about this – it does take a long time to pull off, complete denuclearization," he said. "But despite that, once you start the process, it means pretty much over – you can't use them [the nuclear facilities]. That's the good news."
"I believe that's going to start very soon," he told reporters.
The US president also indicated the "very expensive" and "provocative" military exercises with Seoul would cease – a matter he promised to discuss with the South Korean side. 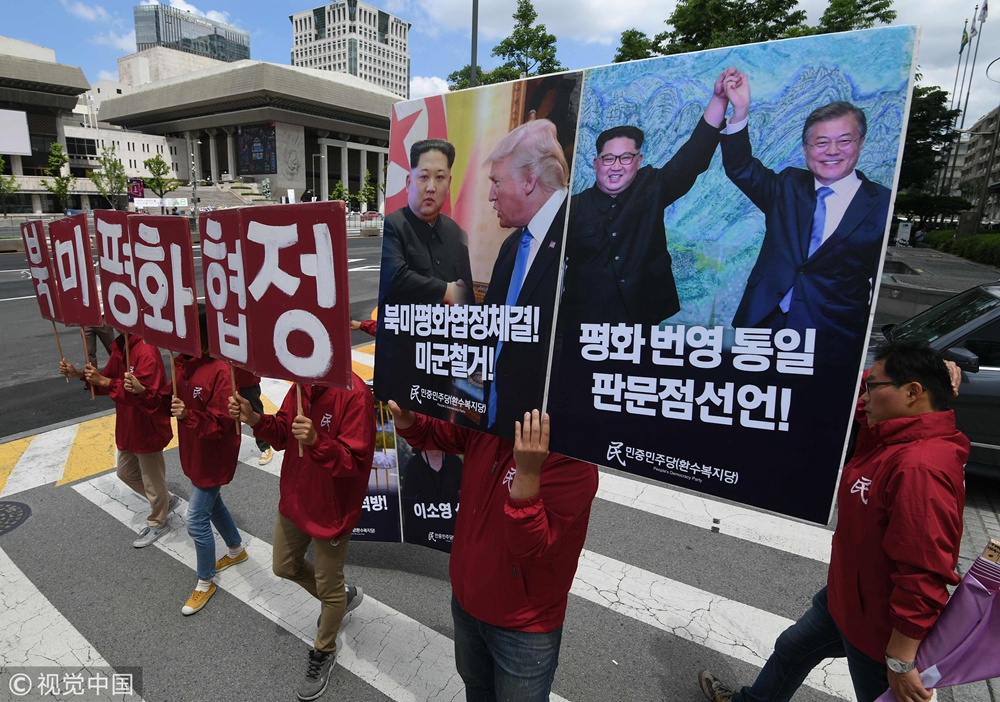 US Secretary of State Mike Pompeo will visit South Korea and China later this week to brief the two countries about the Trump-Kim summit.

Hailing the summit an "important first step," Eugene Tan, an associate professor at Singapore Management University, said the meeting has "got the ball rolling" and that he was "cautiously optimistic" about the development of US-DPRK ties.
Parag Khanna, a senior fellow at the National University of Singapore, told CGTN that he expects "more regional dialogue" to follow the summit, noting that there will be more talks between Pyongyang, Seoul, Beijing and Tokyo. He also expressed "cautious optimism" on the prospects of denuclearization and establishing a peace regime on the peninsula.
08:25 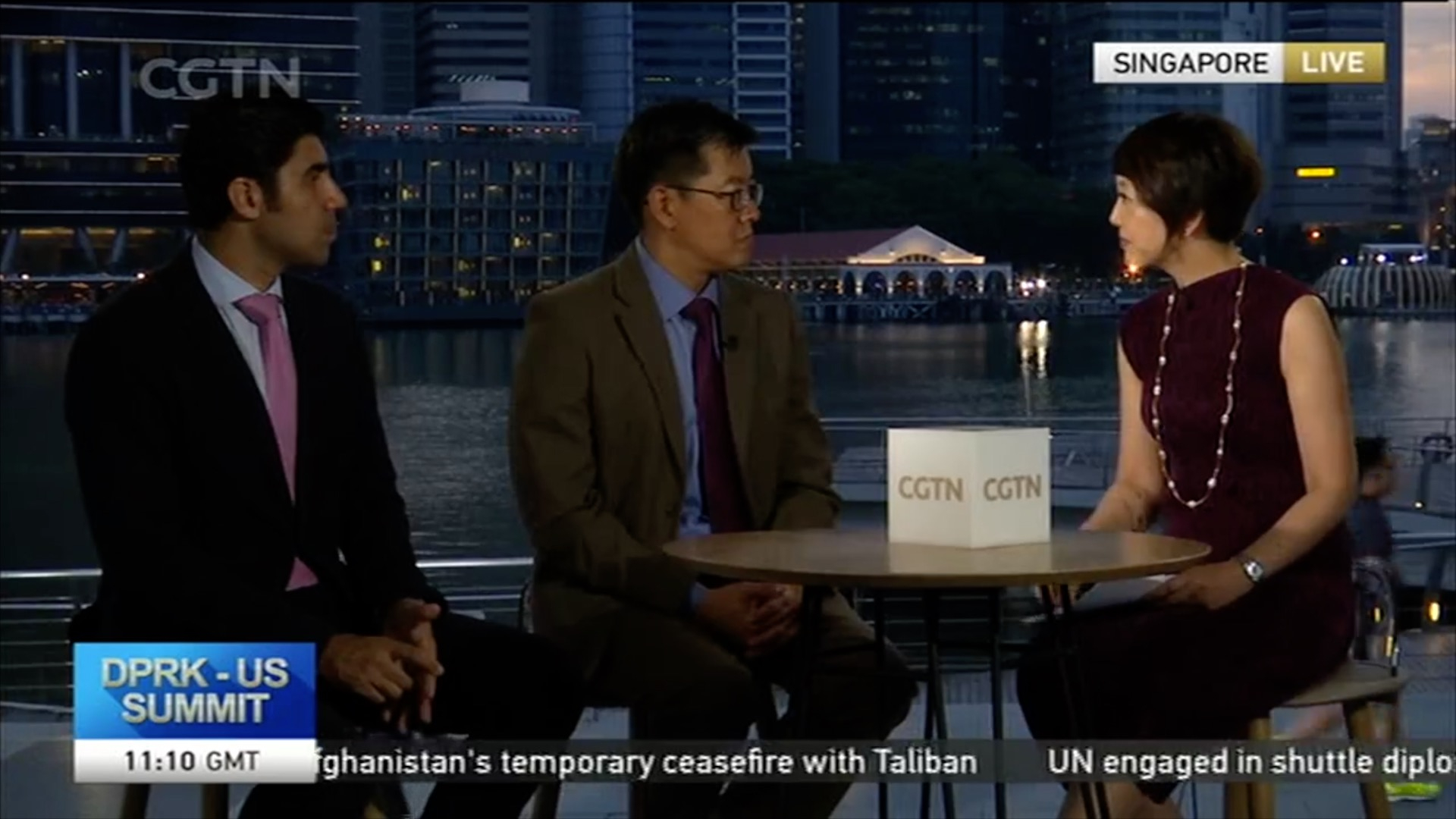 Su Ge, head of the China Institute of International Studies (CIIS), also emphasized his "cautious optimism" and chose to focus on the positive side. It is impossible to solve such a complex issue overnight, he stressed.
As the 1950-1953 Korean War involving the DPRK, China, South Korea and the US ended in an armistice without a peace treaty, the peninsula is still technically in a state of war. The DPRK and South Korea have agreed to push for trilateral talks involving the US, or a four-way dialogue including China with a view to declaring an end to the war and establishing a permanent and solid peace treaty, according to the Panmunjom Declaration.
China has been "active" in promoting peace and stability on the peninsula and will play a more important role after the Trump-Kim summit, said Teng Jianqun, director of the American Studies Department at the CIIS. He underscored China's three principles on the peninsula issue, namely denuclearization, peace and dialogue.
03:41 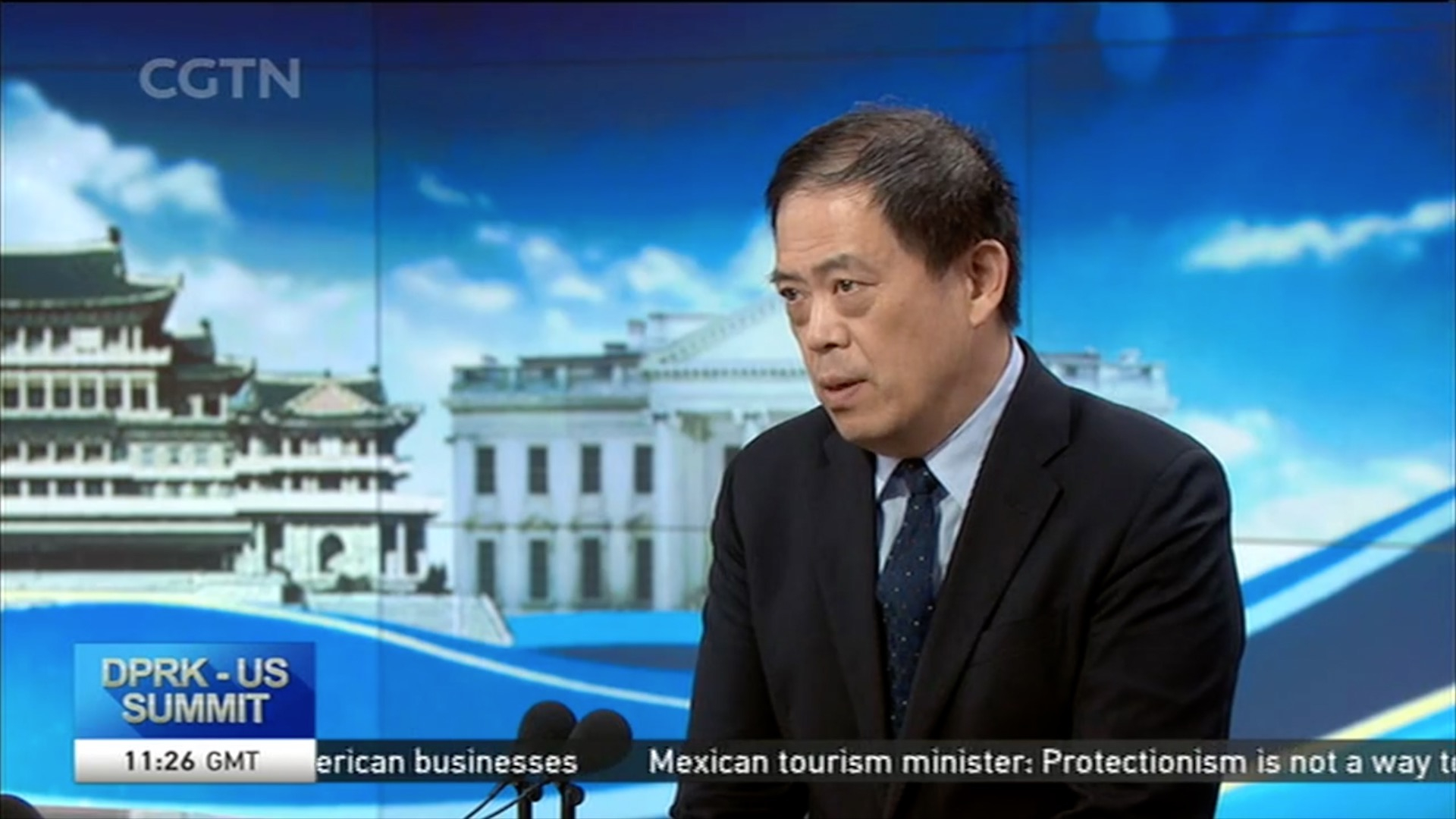 Read more:
China's role in denuclearization of Korean Peninsula
In a statement released on Tuesday night, the Chinese Foreign Ministry said the "positive outcomes" of the Trump-Kim summit were in line with China's expectations, pledging to stay committed to denuclearization of the peninsula and establishing a peace regime.
With the parties involved agreeing on the ultimate goals and acknowledging its complexity, a good start has been made, yet there are still enormous challenges ahead. More efforts and flexibility are needed from the two sides so that they can "meet each other halfway," which is another piece of advice from Beijing.
4488km