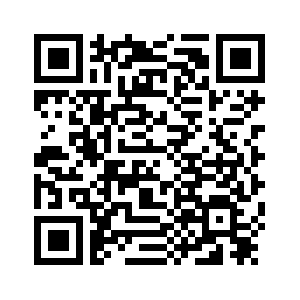 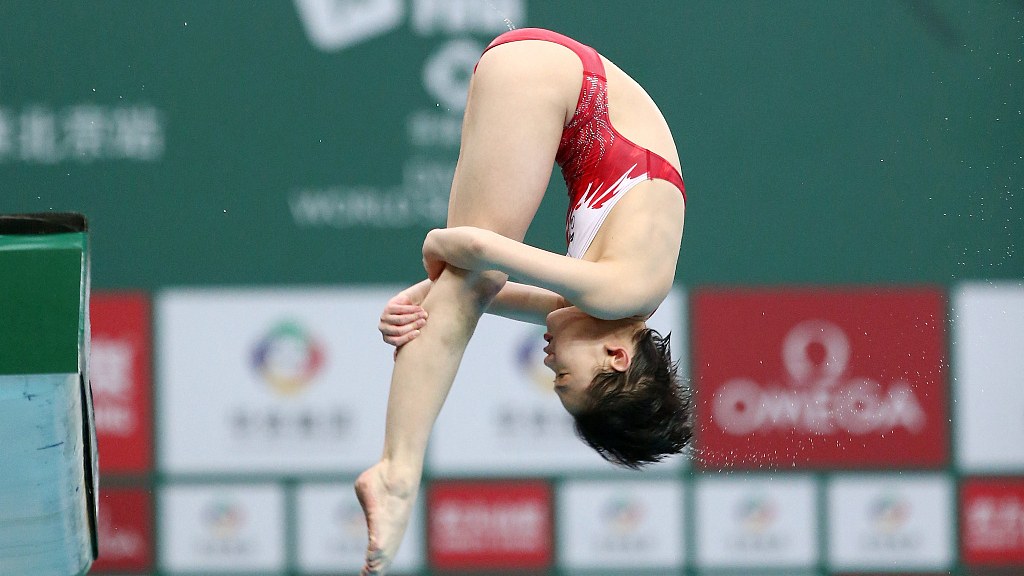 Much to the delight of their home fans, Chinese divers bagged the last three gold medals on the third and final day of the Beijing leg of the FINA/CNSG Diving World Series. With the emphatic all-win performance on the final day, China have made a clean sweep of winning all 10 gold medals in the three-day event at the Water Cube in the Chinese capital.
Zhang Jiaqi, Yang Jian and Si Yajie/Lian Junjie took the last three gold medals on Saturday to cap off a magnificent show by the hosts.
Two-time World Cup champion Zhang brought in the day's first gold with a victory in the women's 10m platform with 400.05 points. She edged out her compatriot and Rio Olympic gold medalist champion Ren Qian, who came second with 371.20 while Meaghan Benfeito of Canada came third with 336.40. 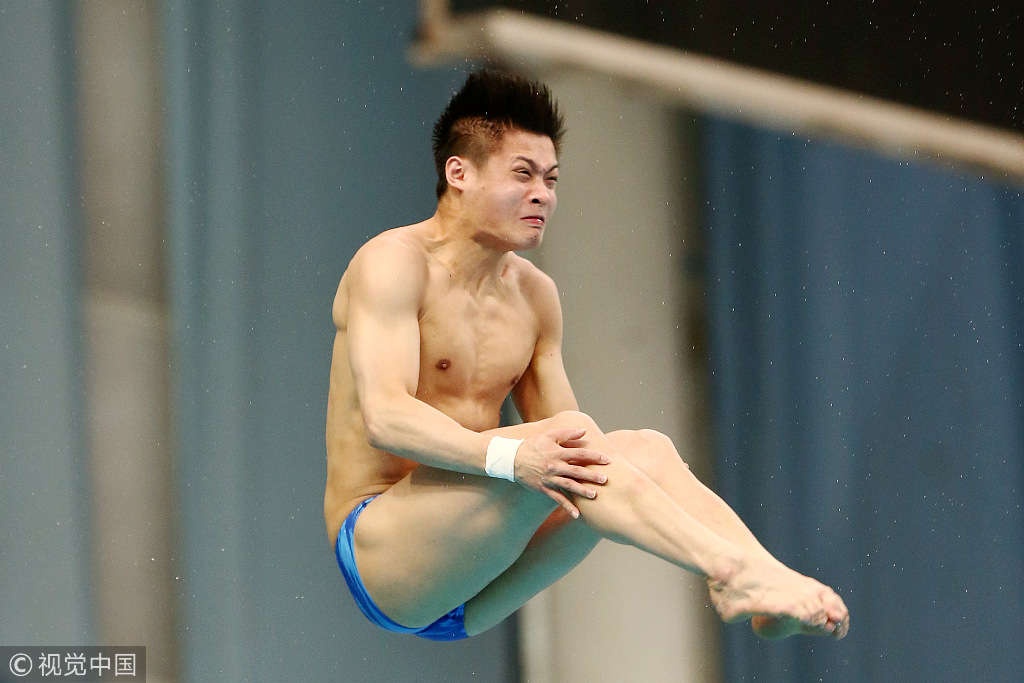 China's Yang Jian during his gold medal-winning performance at the 2019 World Diving Series at the Water Cube in Beijing, China. /VCG Photo

China's Yang Jian during his gold medal-winning performance at the 2019 World Diving Series at the Water Cube in Beijing, China. /VCG Photo

15-year-old Zhang, after registering her emphatic victory, said, "It's my best performance in recent months. I was very nervous as all the fans cheered for us, but I felt better now. It was not easy to receive a 400-plus score."
Meanwhile, Yang continued his winning streak in the men's 10m platform as he collected a total of 573.60, including 102.60 for his fifth dive 207B and 110.70 for his last 109B. The winner of the previous leg of the event in Sagamihara, Japan, last month had almost a cakewalk for his gold medal-winning performance. He was followed to the podium by his country mate and Olympic champion Chen Aisen, who came from behind after three rounds to finish runner-up with 527.65 ahead of Aleksandr Bondar from Russia in 509.95.
Yang told the media, "I don't think I had a perfect final. I became the champion just because my strong rivals, Chen Aisen and Daley, made bigger mistakes than I did." 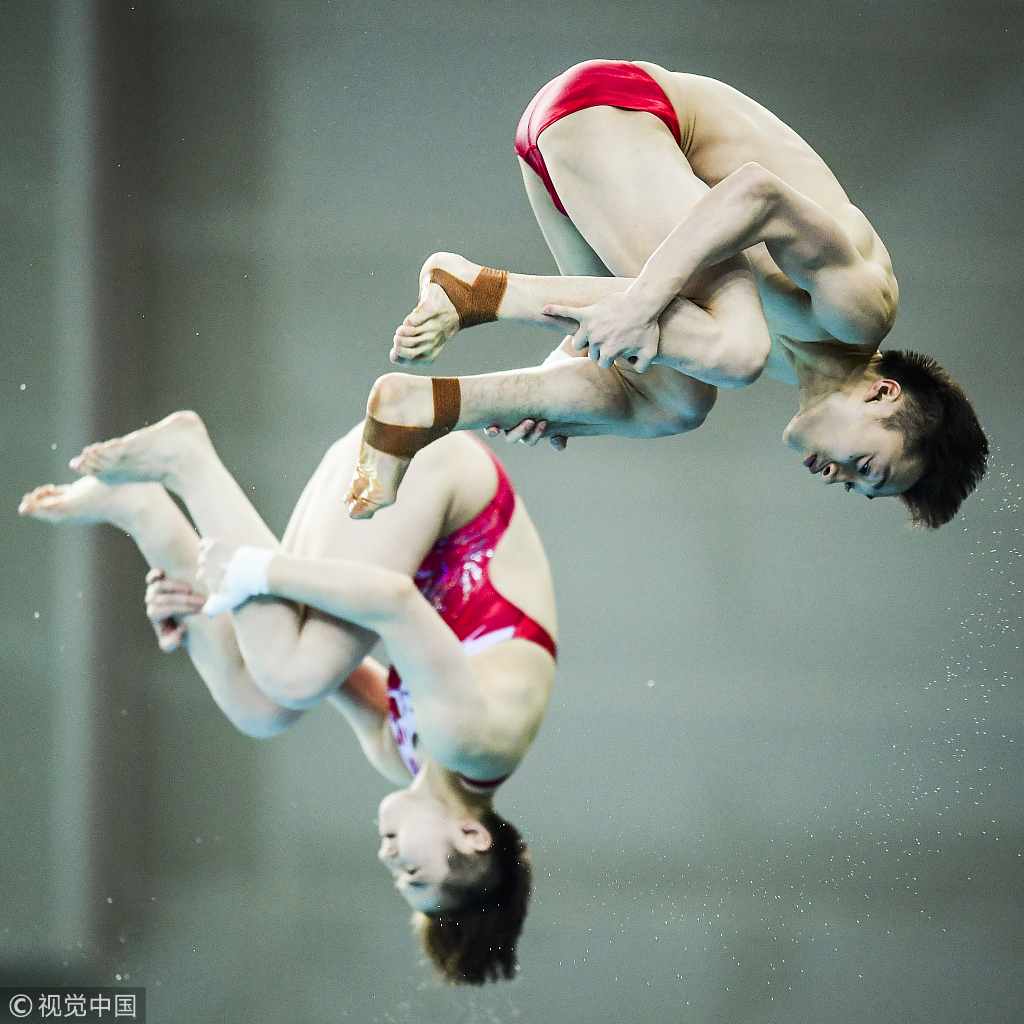 "I suffered from deep scratches and long stitches on my right heel during the winter that ruled me out of training for one month. And I felt exhausted now after our national qualifier, the last stop in Japan and here in Beijing," he added.
In the day's other event, the newly formed Chinese pair of Si/Lian grabbed the mixed 10m platform synchro gold in 346.38, outclassing Nikita Shleikher/Luliia Timoshinina of Russia to second in 301.26. Nathan Zsombor-Murray/Meaghan Benfeito of Canada clinched bronze in 300.96.
Incidentally, this year, the FINA/CNSG Diving World Series feature five legs in five different cities as well as countries across the world. The series kicked off in Sagamihara (Japan) from March 2-3 before Beijing (China) hosted the event from March 7-9. The remaining legs are scheduled for Montreal (Canada) from April 26-28, Kazan (Russia) from May 10-12 and London (Britain) from May 17-19.