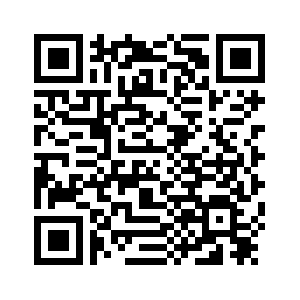 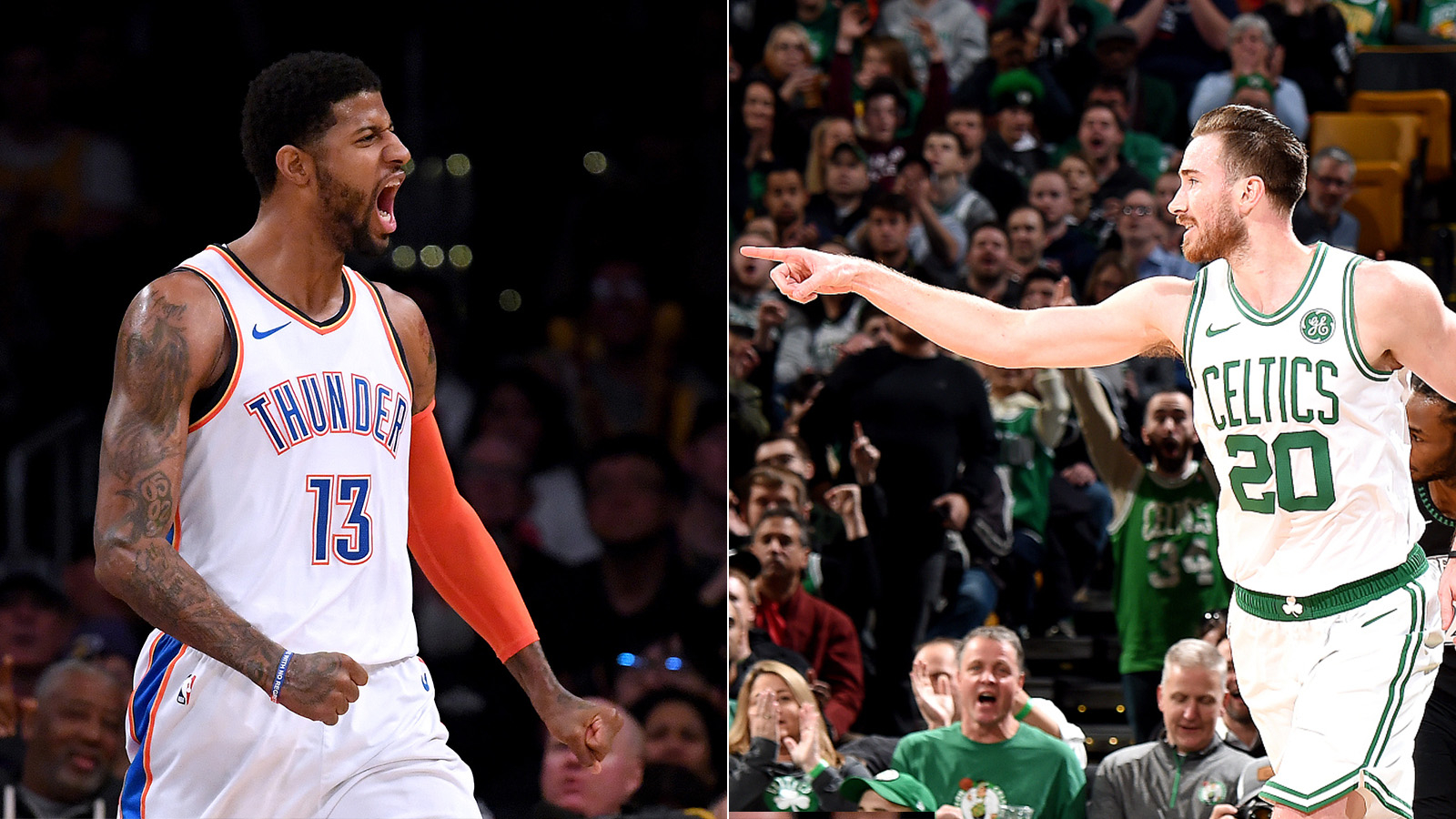 The 2018-19 NBA regular season continued on Wednesday with nine games. The Boston Celtics at home beat the Minnesota Timberwolves 115-102, claiming the 13th straight victory against the same team at the TD Garden. Meanwhile, the Oklahoma City Thunder defeated the Los Angeles Lakers 107-100 to get their second consecutive win.

Celtics know how to play as a team 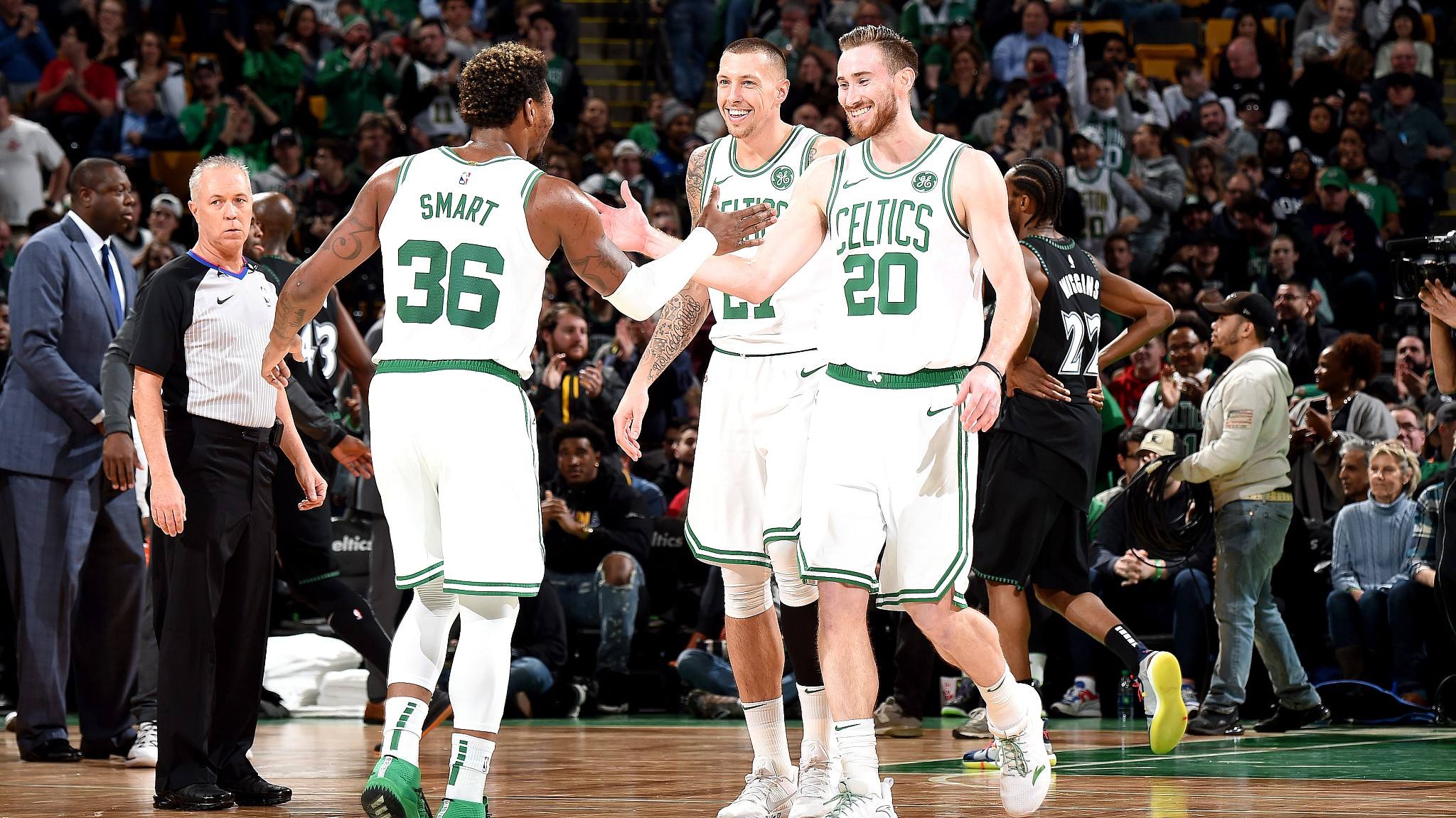 Gordon Hayward #20 of the Boston Celtics gives high-five to Marcus Smart #36 in the game. /VCG Photo

Gordon Hayward #20 of the Boston Celtics gives high-five to Marcus Smart #36 in the game. /VCG Photo

Boston's Gordon Hayward scored season high 35 points from the bench with an incredible field goal rate of 77.77 percent (14/18) including a 3-point rate of 57.14 percent (4/7). Three from the starting line-up put down double digits: 16 points by Terry Rozier, 15 points by Al Horford and 12 points by Marcus Morris.
Minnesota saw Andrew Wiggins score 31 points, which was also his highest this season so far. Karl-Anthony Towns dropped beautiful 28 points, 12 rebounds and seven assists. Tyus Jones was the team's third player who scored over 10 points (14). 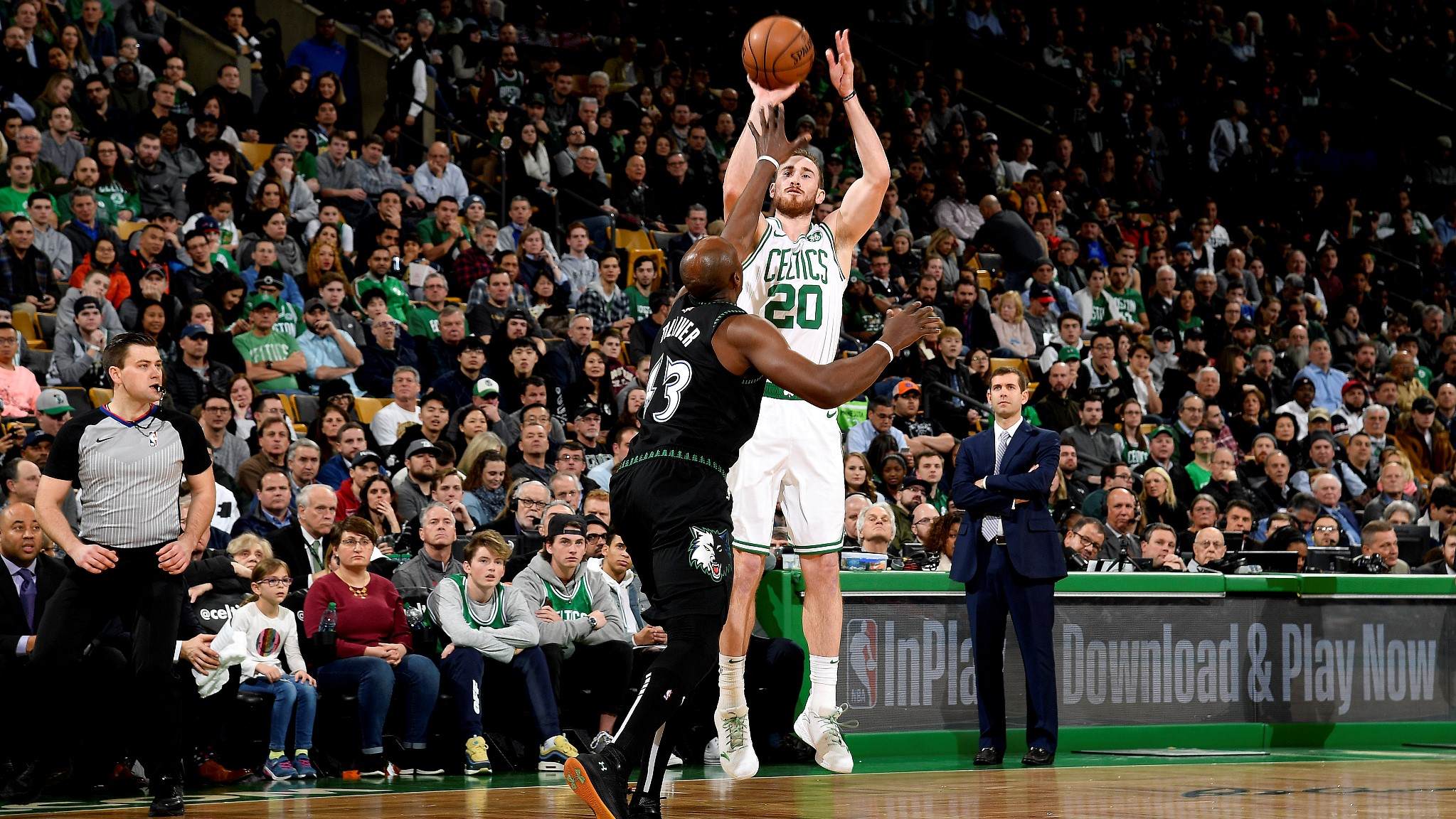 Hayward #20 of the Celtics shoots under defense. /VCG Photo

Hayward #20 of the Celtics shoots under defense. /VCG Photo

Theoretically this game could not show the best of the two teams because both sides were dealing with injuries. The Timberwolves did not have Jeff Teague, Derrick Rose or Robert Covington while the Celtics were without Kyrie Irving. However, as the group that has better discipline and understanding of how to play as a team, Boston secured their leading position in the first half (60-42).
Minnesota got into a jam with their offense from the beginning. After more than one and a half quarters, the team only got 27 points and trailed by 20. The T-wolves played a simple game with few passes and little ball movement. Mostly their players preferred to take jump shots or drive to the rim after a screen.Towns could not find a solution against Boston's defense and thus made only two of his nine shots in the first half. 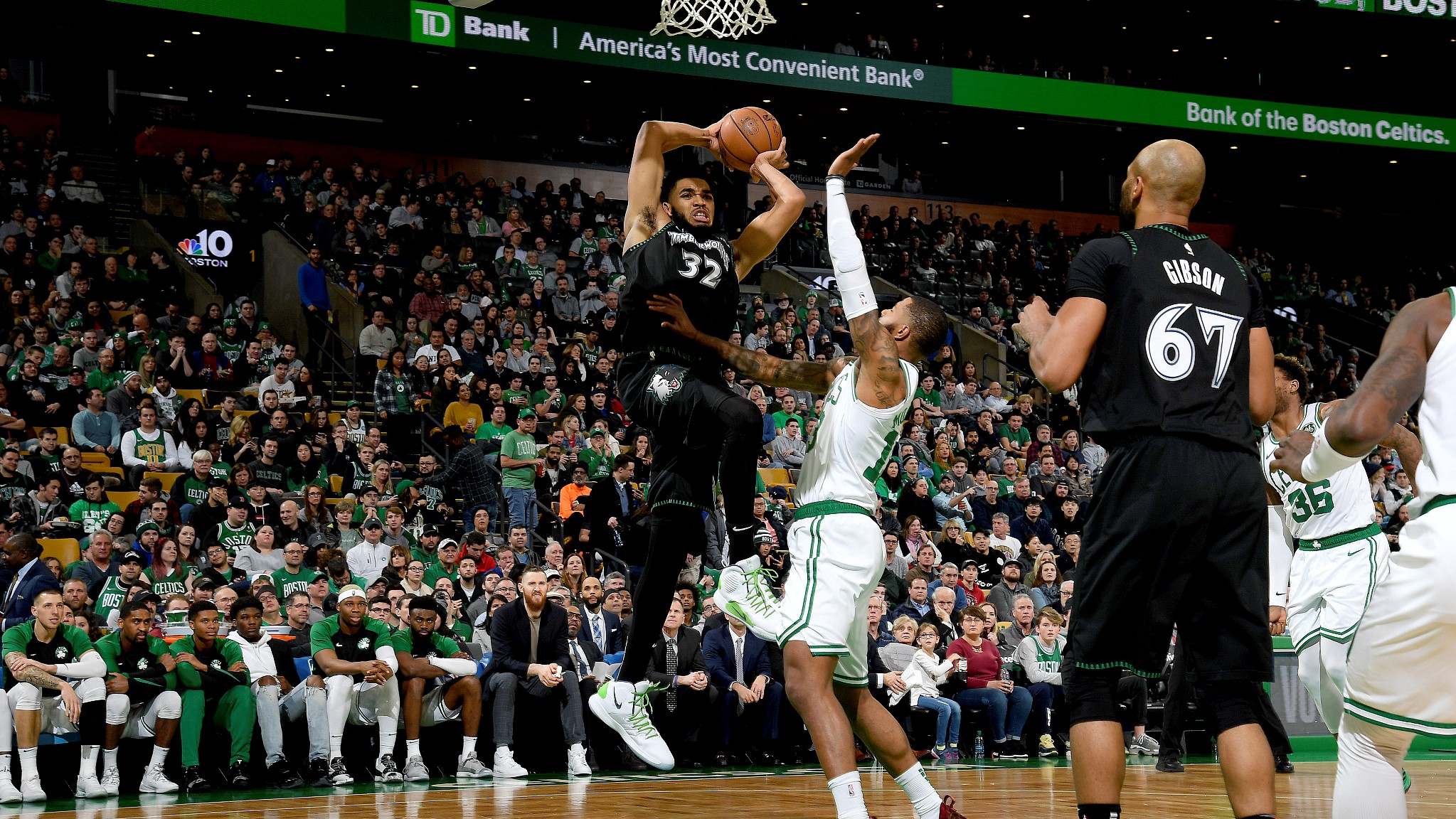 Karl-Anthony Towns #32 of the Minnesota Timberwolves drives to the rim in the game. /VCG Photo

Karl-Anthony Towns #32 of the Minnesota Timberwolves drives to the rim in the game. /VCG Photo

Things started to change in the third quarter. First, both Wiggins and Towns got into a rhythm with shooting. Thanks to that, Towns was able to find more space for his penetration. Moreover, Towns began to exploit his advantage in height to take more offensive rebounds and he dropped in total 20 points, five rebounds and five assists in this quarter. Minnesota narrowed the score down to 81-87 before the last quarter.
Boston enhanced their defense in the fourth quarter in order to not leave any chance for the Timberwolves. After a 11-2 run, the game became a foregone conclusion. The Celtics in the first half alone used a 10-person rotation and each of them scored. Without Irving, their best scorer, the team knew they had to rely on everybody instead of certain players to win the game. By contrast, the Timberwolves bet the game on their two star players with no Plan B. When Towns and Wiggins could not do their job, the team lost their chances to win. 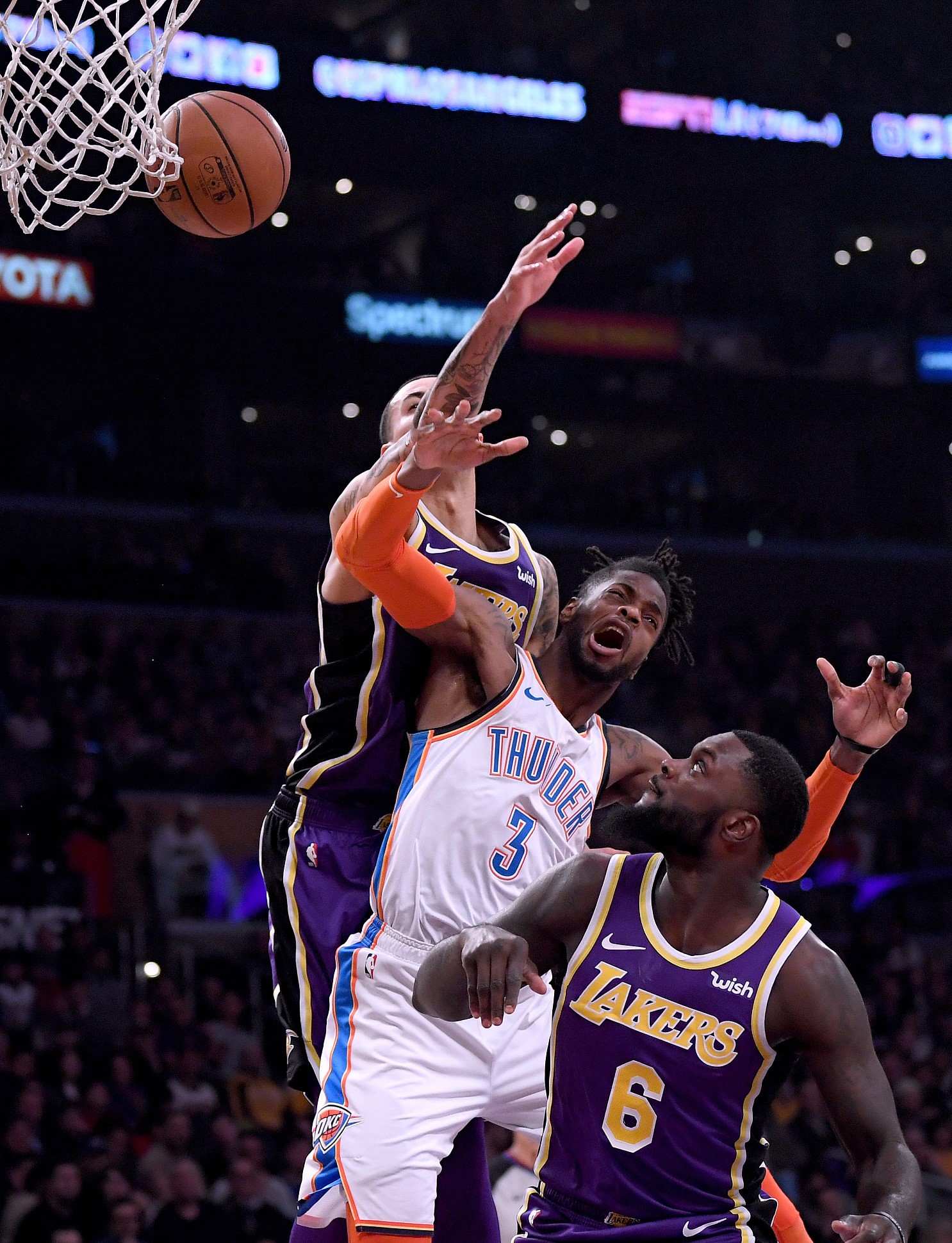 Nerlens Noel #3 of the Oklahoma City Thunder is fouled by players of the Los Angeles Lakers. /VCG Photo

Nerlens Noel #3 of the Oklahoma City Thunder is fouled by players of the Los Angeles Lakers. /VCG Photo

OKC's Paul George again scored the court's highest 37 points to help the team win. Steven Adams dropped a regular double-double of 14 points and 15 rebounds. Russell Westbrook though claimed another triple-double of 14 points, 16 rebounds and 10 assists, his efficiency of 3/20 for field goal and 1/7 for 3-point was indeed ugly.
Kentavious Caldwell-Pope from the bench scored the highest 25 points for Los Angeles by making the most five three-pointers out of 11 attempts. Brandon Ingram and Josh Hart both put down double-double with respectively 17 points, 11 rebounds and 13 points, 15 rebounds. 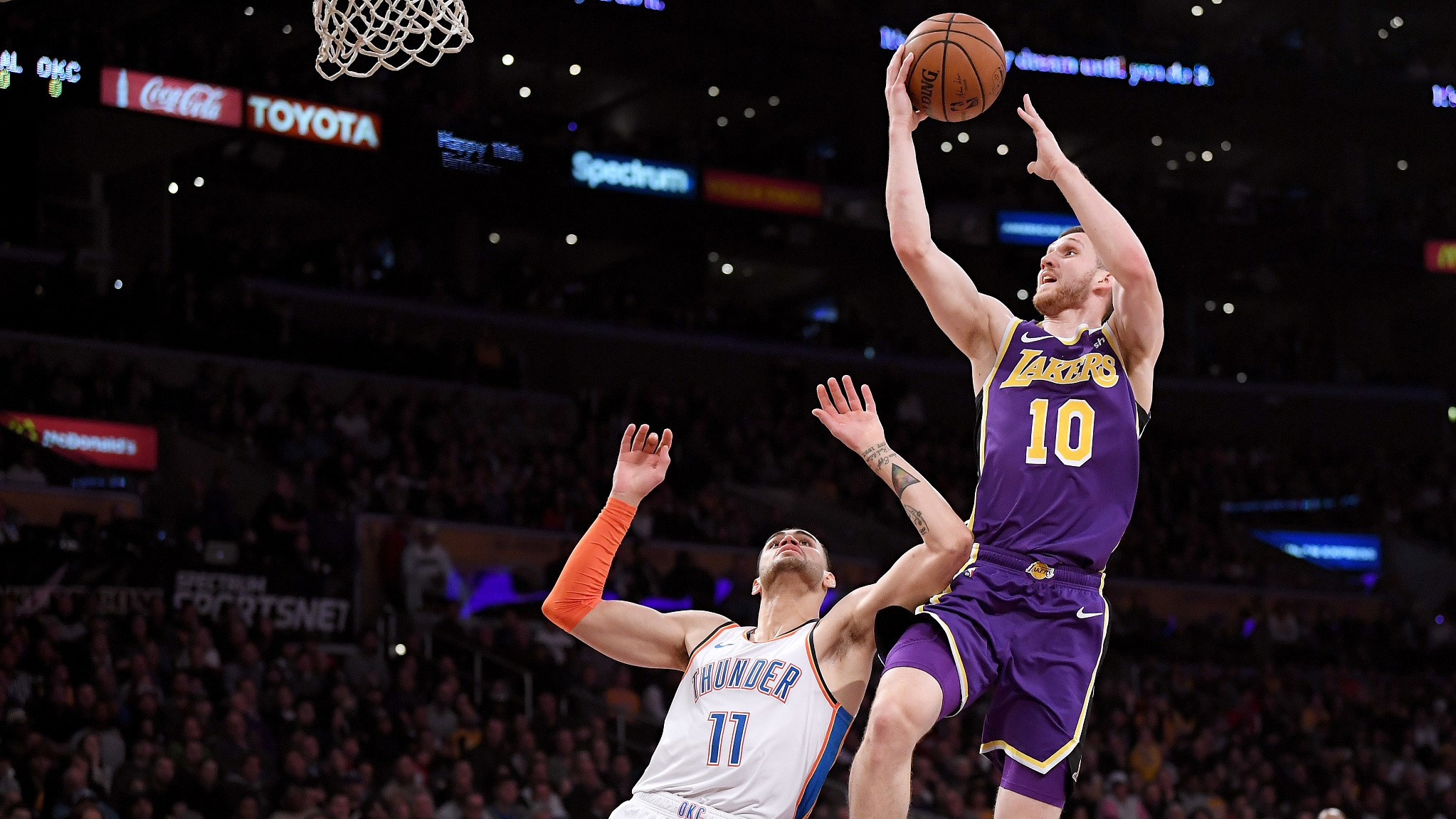 The key word of this game was "transition." Without LeBron James, the Lakers lacked the guy who could change the opponent's defense by himself. The Thunder though were one of the league's best defensive teams, struggled on offense due to its lack of shooters. Therefore, both sides relied on a transition attack.
The Lakers played way more physical than most of their games this season. Under their defense, George only made two of six shots in the first quarter while Westbrook missed all six of his. In general, the Lakers tied Oklahoma City in steals (8-8) and scoring in the restricted area (54-54), both what OKC were good at. Furthermore, LA even beat the Thunder in blocks (9-5) and fast break scoring (27-18). 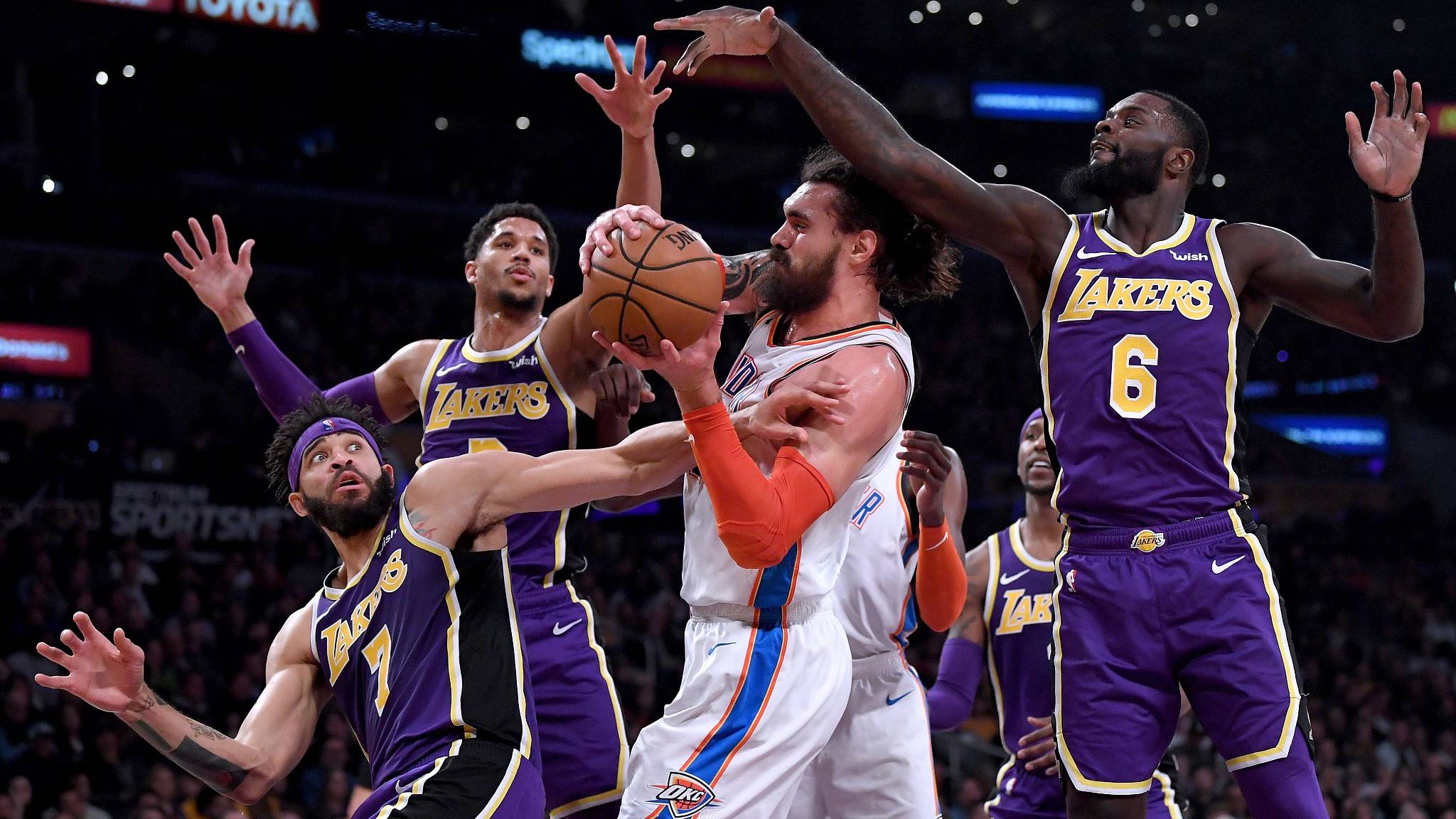 Steve Adams #12 of OKC tries to shoot when he is surrounded by four Lakers. /VCG Photo

Steve Adams #12 of OKC tries to shoot when he is surrounded by four Lakers. /VCG Photo

By contrast, OKC were the better rebounding team and they led in this area 64-54. They also forced the Lakers to commit more turnovers (17-11). The two advantages explained their lead in second-chance points (12-6). Another reason for the Thunder's win was Paul George. Though he had to sit on the bench for a long time because of the three fouls in the first quarter, George still managed to score 28 points by making 12 of his 25 shots before the last quarter.
As for Westbrook, it was a different story. The truth was that when Oklahoma City finally managed to extend their lead in the fourth quarter, Westbrook was not on the court. Bad news for the Lakers was that James might be shelved for another week.
Other games on Wednesday included (away teams come first)
Dallas Mavericks 122-84 Charlotte Hornets
Miami Heat 117-92 Cleveland Cavaliers
Atlanta Hawks 98-114 Washington Wizards
New Orleans Pelicans 121-126 Brooklyn Nets
Orlando Magic 112-84 Chicago Bulls
Detroit Pistons 101-94 Memphis Grizzlies
Philadelphia 76ers 132-127 Phoenix Suns