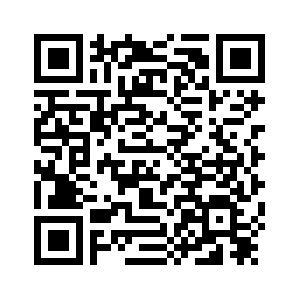 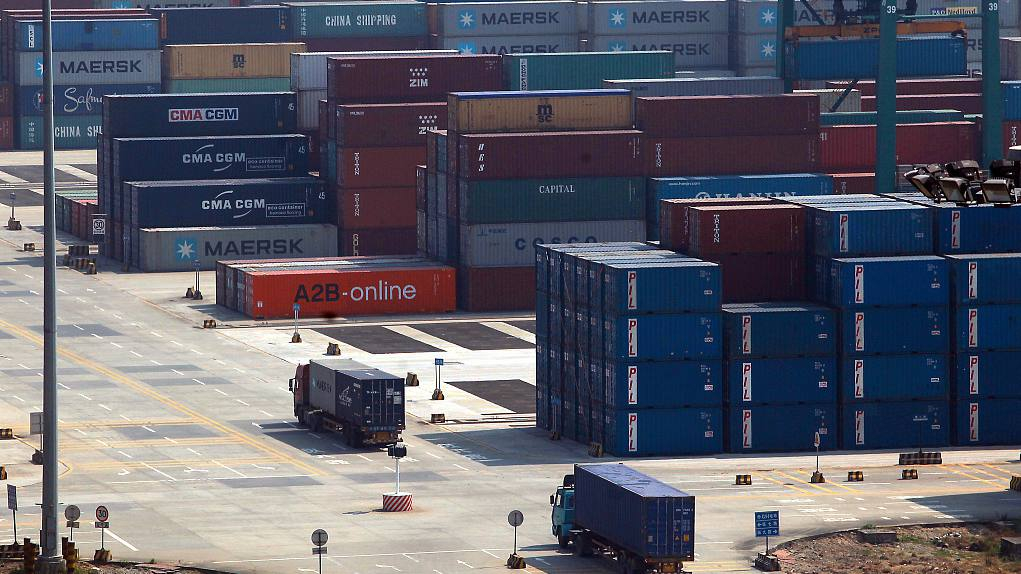 Editor's note: Dr. Yuan Sha is an assistant research fellow at the Department for American Studies of the China Institute of International Studies. The article reflects the author's opinion, and not necessarily the views of CGTN.
During the annual conference at the sidelines of the second session of the 13th National People's Congress, Minister of Commerce Zhong Shan, together with Vice Minister and deputy representative of international trade negotiation Wang Shouwen and Vice Minister Qian Keming, answered questions from a room of Chinese and international journalists related to China's goal of stimulating a robust domestic market and promoting all-round opening up.
How can China's foreign trade be improved and stabilized?
President Xi Jinping and Premier Li Keqiang have put stabilization and improvement of trade one of the priorities of China this year. Amid heightened trade tensions with the U.S. as well as downward pressure on the Chinese economy, how to stabilize and improve China's trade has become a major concern.
Minister Zhong elaborated on this question by proposing a two-pronged approach. On the one hand, China will take strong measures to stabilize the scale of trade.
First, stabilize the policies of trade. Specifically, China will try every means to alleviate burdens and increase returns for businesses by improving such services as export insurance, finance credit and trade facilitation. 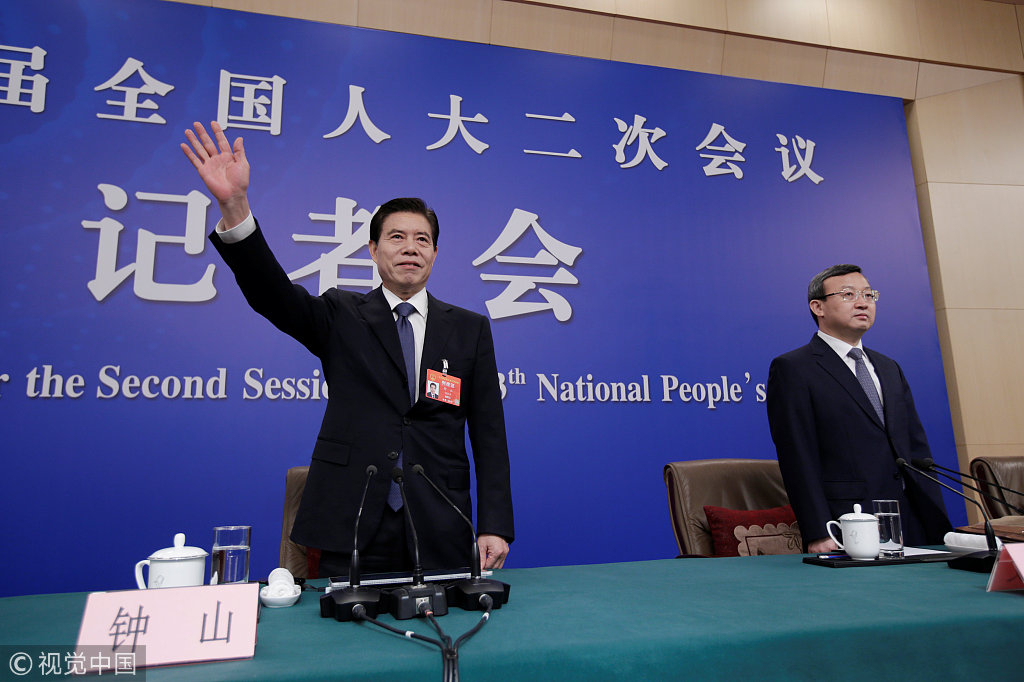 Second, stabilize the entities of trade, including state-owned enterprises, foreign-owned enterprises as well as private enterprises. Private enterprises, in particular, have become the mainstay in China's trade, making up of 48 percent of China's total trade value in 2018, and will unleash great potential.
Third, stabilize the markets of trade. China will step up efforts to push for the international economic cooperation in general and the Belt and Road Initiative (BRI) in particular. China will also optimize the market structure by consolidating traditional markets and exploring emerging markets.
On the other hand, China will improve the quality of trade. China is a large trading nation, but is far from a strong one. Thus, China will take measures to improve the quality of trade and its competitive edge in the international trade system.
First, encourage hi-tech, high-quality and high value-added export, in an aim to move China further up in the global value chain.
Second, optimize the structure of imports in an aim to meet the growing domestic demand.
Third, make innovation the primary driving force in order to facilitate an innovation-driven economy, which includes innovations in technology, systems and management.
How can China-U.S. trade relations be stabilized?
As the two largest economies in the world, how to stabilize the China-U.S. trade relations is the most sought-after question in this press conference.
Minister Wang Shouwen talked positively about the ongoing China-U.S. trade talks and clarified several crucial points. 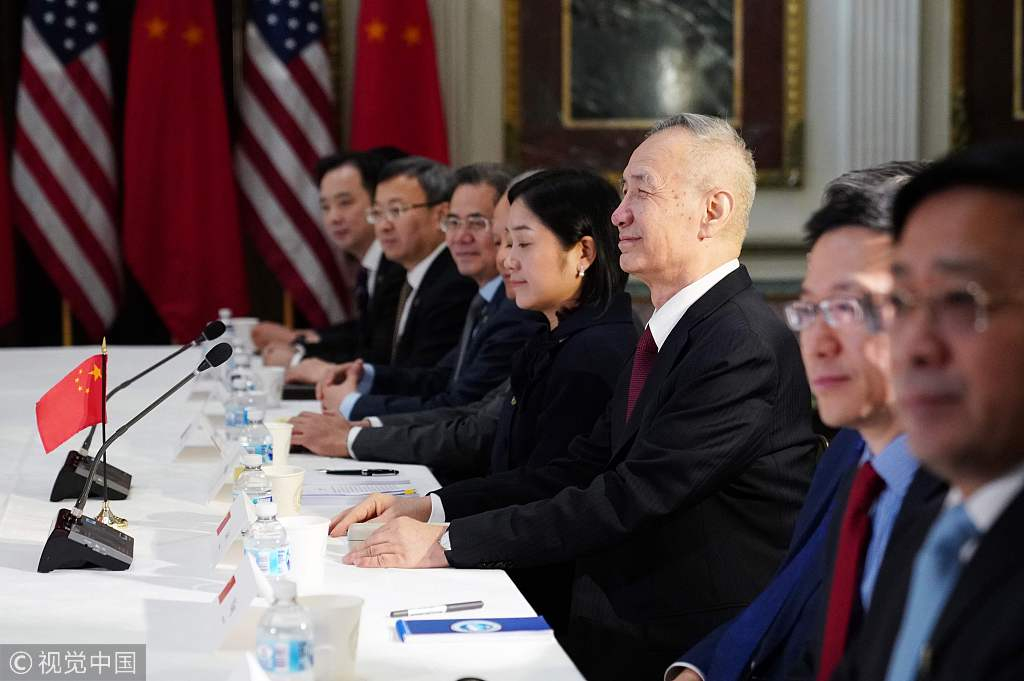 First of all, he clarified the important consensus reached between the two sides, which is that the goal of both sides is to jointly abolish mutually-imposed tariffs and put an end to imposing additional tariffs.
Second, he pointed out that the two teams of trade negotiators are engaged in intense talks, with three rounds of high-level consultations already held during the past four months, and has made tangible progress in key areas of disputes.
Third, he reiterated the principle of “bilateral, equitable and equal” for the trade talks, and urged the two sides to deliver on the important consensus reached between President Xi and US President Donald Trump in Buenos Aires and return the bilateral relations to normal.
Given the importance of the bilateral relations, he believed that stabilizing the bilateral trade relations would be in the interests of both countries and also meet the expectation of the international community.
What to expect?
U.S. trade protectionism and unilateral trade bullying remain the biggest factor of uncertainty. According to the latest statistics from China's General Administration of Customs, China-U.S. trade volume fell by 16.1 percent, with China's export to the U.S. down by 9.9 percent and the U.S. export to China down by 32.2 percent during the past two months.
But there are also positive signs in China's overall trade performance. According to the statistics, China's total export and import volume rose to a new high in 2018, reaching the threshold of 300 billion RMB for the first time, up by 9.7 percent compared with last year. The first two months of 2019 witnessed 0.7 percent growth compared with the same period last year, which was largely owing to booming trade with the EU, ASEAN, Japan, and the BRI participating countries.
Facing setbacks in economic globalization and multilateralism, China's trade might face greater strain ahead. But just as Vice Minister Qian Keming pointed out, China would further improve the environment for foreign investment and build strong platforms for Chinese businesses' external investment. China will also facilitate FTA negotiations such as the RCEP and the China-Japan-ROK talks, which inject new vitality into China's trade activities.
The ministers' remarks sent encouraging signals. With a higher-level of opening-up and further stimulation in the domestic market, China's trade is expected to expand in scope and improve in quality, which would not only be critical to the country's socio-economic stability but also benefit the world at large.
(If you want to contribute and have specific expertise, please contact us at opinions@cgtn.com)