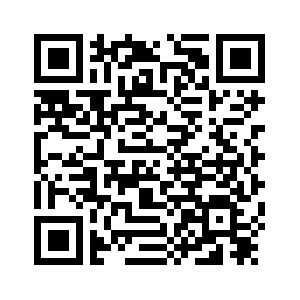 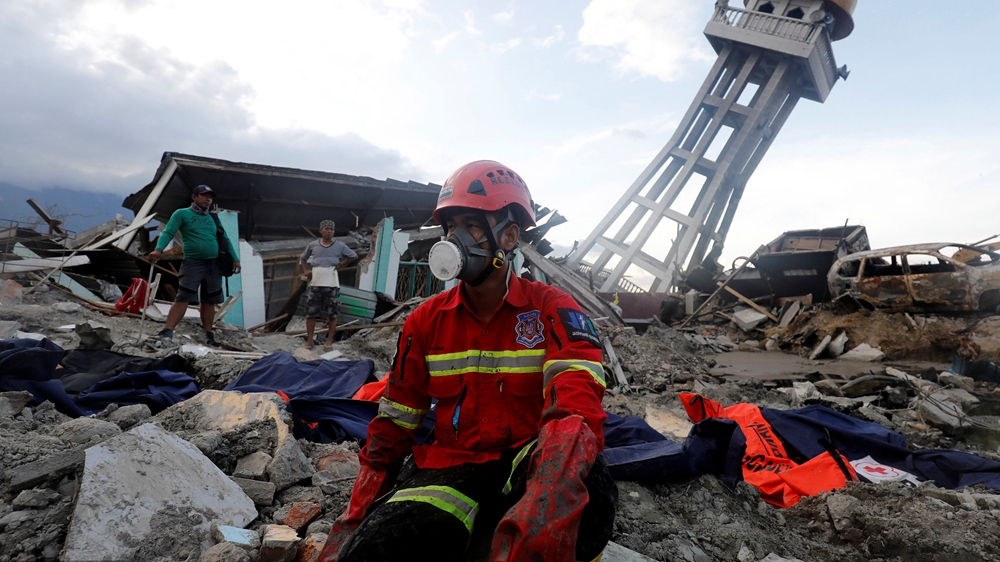 Rescuers picking through the grim aftermath of Indonesia's quake-tsunami issued a fresh public health warning on Saturday as more decaying corpses were unearthed from beneath the ruined city of Palu.
More than a thousand people may still be missing in the seaside city on Sulawesi island, officials said, after the region was hit by a powerful 7.5-magnitude quake and a wall of water on September 28.
Hopes of finding anyone alive a full eight days since the disaster have all but faded, though Indonesian authorities have not officially called off the search for survivors. 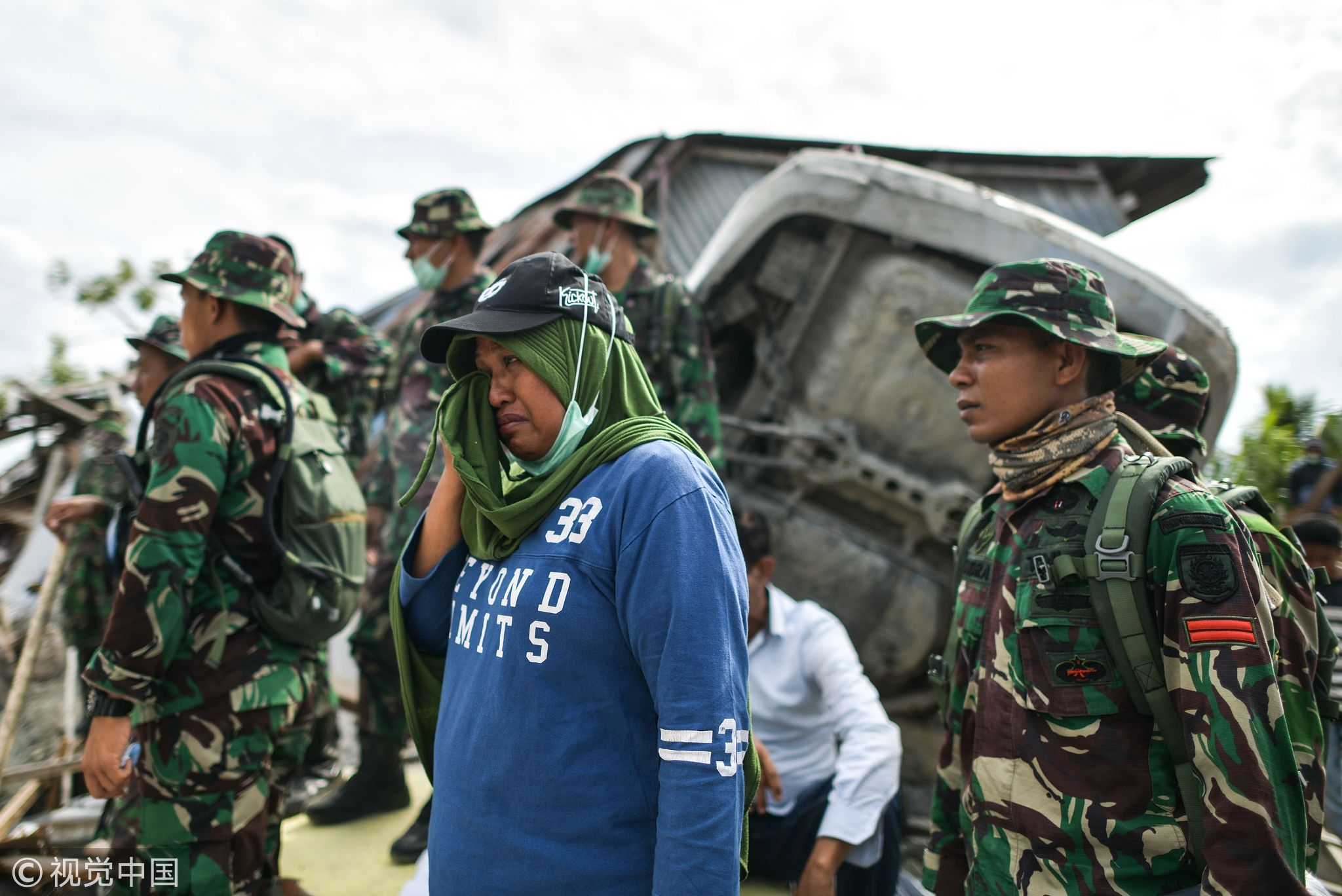 Hermawati (C), 44, wipes off her tears near the area where her family members went missing at Perumnas Balaroa village in Palu, Central Sulawesi, October 6, 2018. /VCG Photo

Hermawati (C), 44, wipes off her tears near the area where her family members went missing at Perumnas Balaroa village in Palu, Central Sulawesi, October 6, 2018. /VCG Photo

There are fears that vast numbers of decomposing bodies could be buried beneath Petobo and Balaroa – two areas virtually wiped off the map – and authorities have warned survivors to steer clear as they brace for more macabre discoveries.
"Most of the bodies we have found are not intact, and that poses a danger for the rescuers. We have to be very careful to avoid contamination," said Yusuf Latif, a spokesman for Indonesia's search and rescue effort.
"We have vaccinated our teams, but we need to be extra cautious as they are exposed to health hazards. This is also a health concern for the public. It is very hard to control the crowd. People might be exposed to danger." 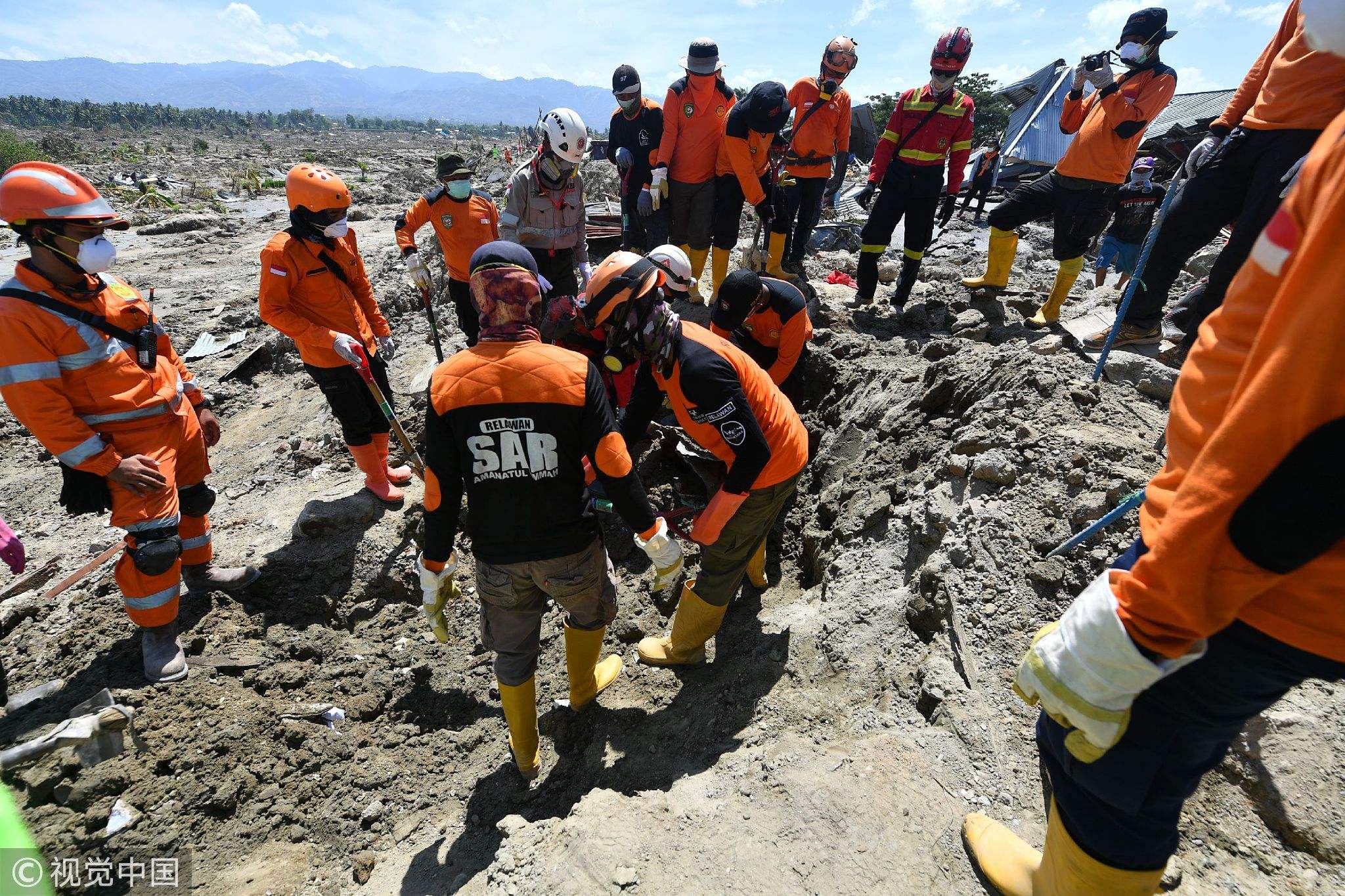 At a massive government housing complex at Balaroa, where the sheer force of the quake turned the earth temporarily to mush, soldiers in face masks clambered over the giant mounds of mud, brick, and cement.
The troops peeking under collapsed walls and peeling back corrugated sheets do not have to look hard.
Sergeant Syafaruddin, from an army unit in Makassar south of Palu, asks for a body bag to be brought across to a spot near where the remnants of an Islamic school now stands.
Two of his soldiers emerge from the ditch with the body bag sagging in the middle but looking too light to be a corpse – they say they found the heads of two adults and one child.
"There are no survivors here. We just find bodies, every day," says Syafaruddin.
At another spot, a digger is called to turn over the devastated remains of a home. With almost no effort he unearths the body of a long-haired lady buried in mud.
At the flattened Hotel Roa-Roa – where early optimism that survivors might be found faded as the days wore on and tropical heat intensified – search teams also prepared body bags. 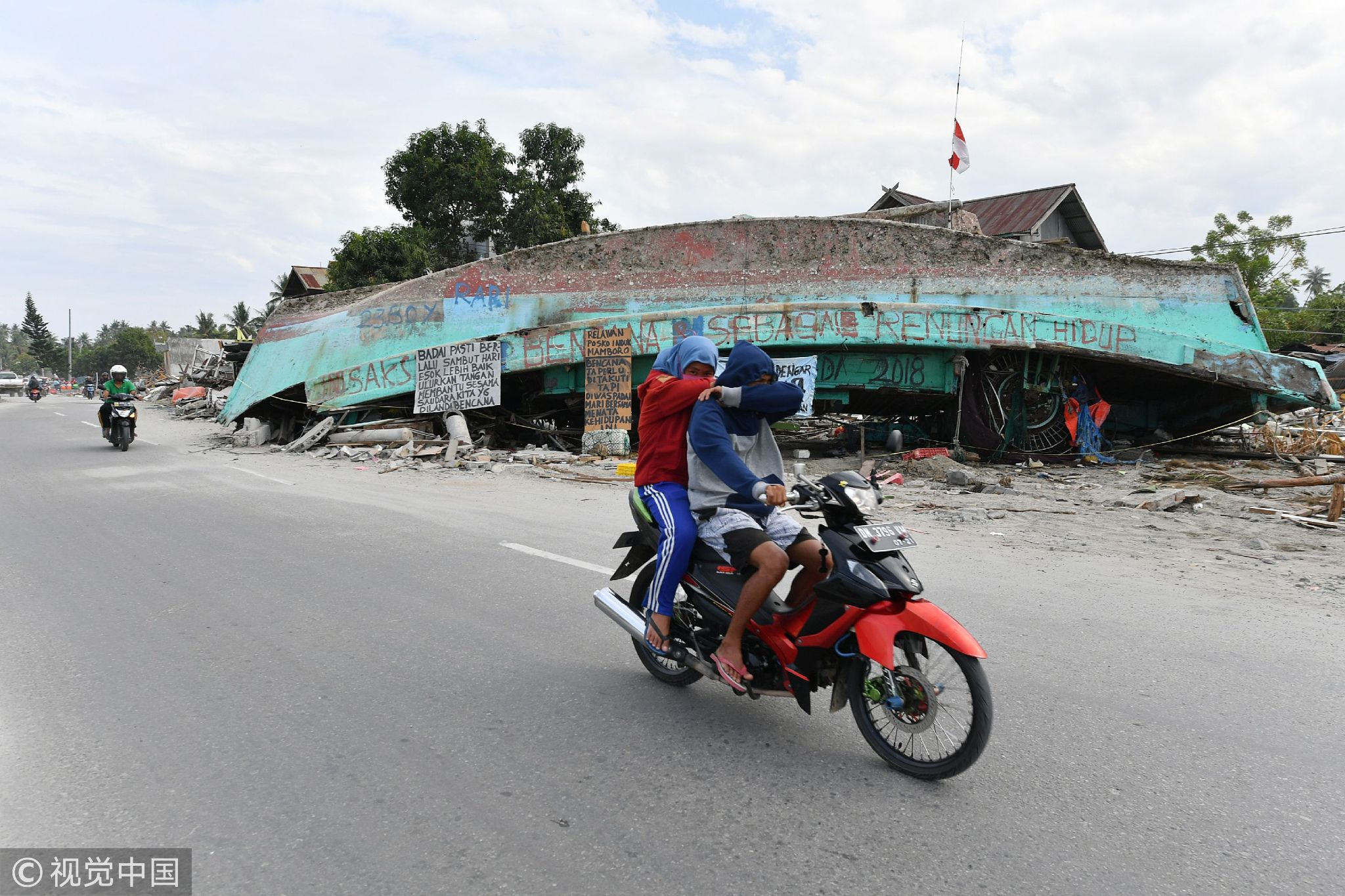 Survivors have ransacked shops and supply trucks in the hunt for basic necessities, prompting security forces to round up dozens of suspected looters and warn that they will open fire on thieves.
Hundreds of people on Saturday rushed a truck carrying gas cylinders for cooking, with long and desperate queues quickly forming.
One supermarket that opened its doors refused to allow people inside, instead of passing goods through the door as armed troops stood to watch.
"We have not raised prices at all. However, we are not letting customers inside for safety reasons. The building survived the earthquake, but we don't know how safe it is," said Satria Hamid, a spokesman for the Transmart Carrefour supermarket.
Thousands of survivors continued to stream out of Palu to nearby cities in the aftermath of the disaster.
Hospitals remain overstretched and short on staff and supplies. 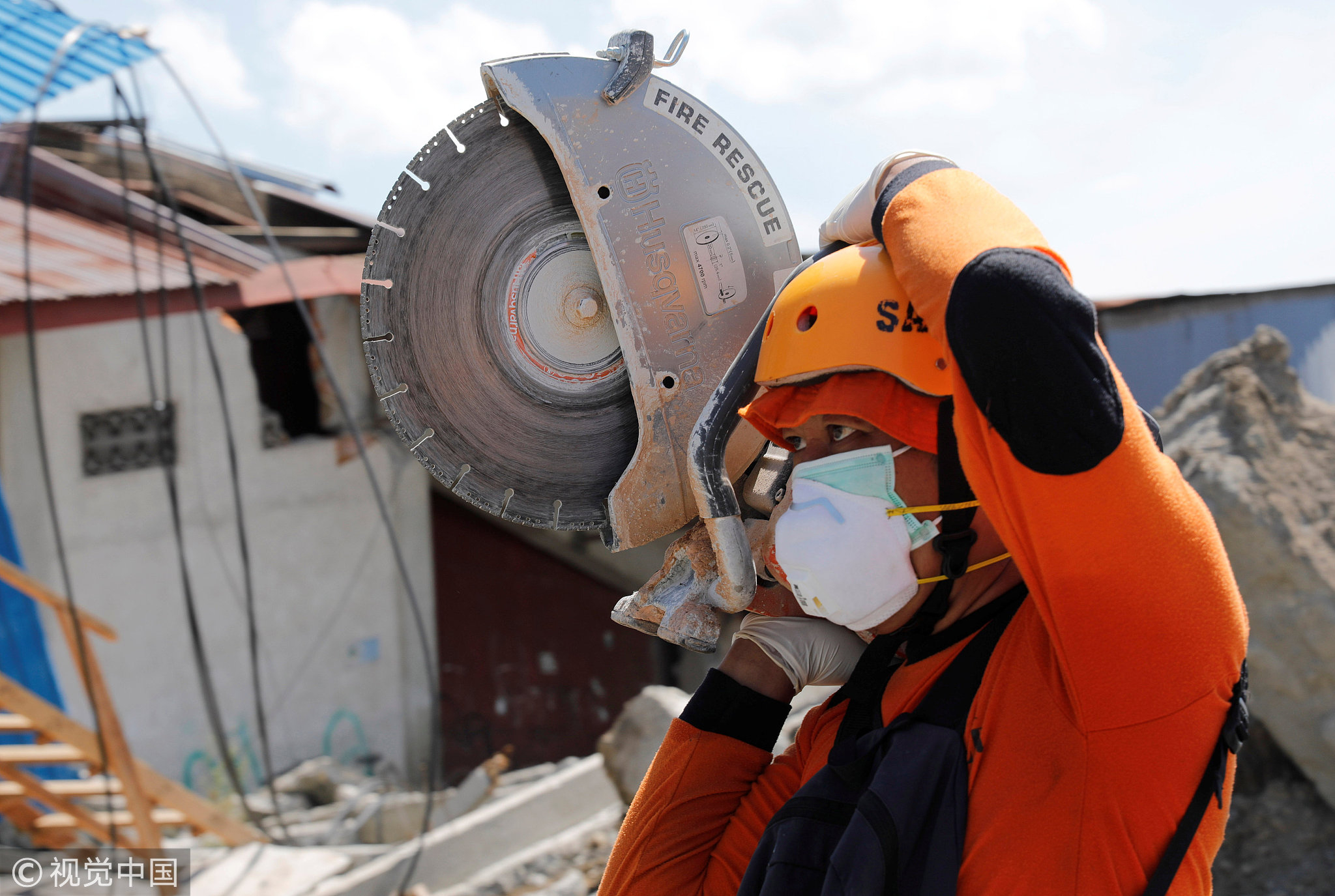 A rescue team member carries a chainsaw as he walks to find dead bodies in Palu, Indonesia, October 5, 2018. /VCG Photo

A rescue team member carries a chainsaw as he walks to find dead bodies in Palu, Indonesia, October 5, 2018. /VCG Photo

Project HOPE, a medical NGO, said only two of its 82 staff in Palu had reported for duty since the quake.
"We still don't know the fate of the clinic doctors, nurses, and technicians who usually staff the clinic," the organization said in a statement.
A floating hospital run by the Indonesian navy and docked in Palu port has already assisted with the delivery of a baby, local media reported.

The United Nations said on Friday that it was seeking 50.5 million US dollars "for immediate relief" to help victims of the devastating quake and tsunami in Indonesia.
After days of delays, international aid is slowly making its way to the disaster zone, where the UN says almost 200,000 people need humanitarian assistance.
Indonesia had been reluctant to accept outside help at first but as the scale of the disaster became clear the government agreed to allow in foreign aid.
Getting vital supplies to the affected areas has proved hugely challenging, with the number of flights able to land at Palu's small airport still limited, leaving aid workers facing grueling overland journeys.
Oxfam had sent water treatment units and purification kits to Palu and Swiss aid teams on the ground were providing drinking water and emergency shelter, both said in statements on Saturday.
Indonesia sits along the Pacific "Ring of Fire", the world's most tectonically active region, and its 260 million people are vulnerable to earthquakes, tsunamis, and volcanic eruptions.
(Top image: A rescue worker rests after recovering victims in the Balaroa neighborhood in Palu, Central Sulawesi, Indonesia, October 6, 2018. /VCG Photo)
Source(s): AFP