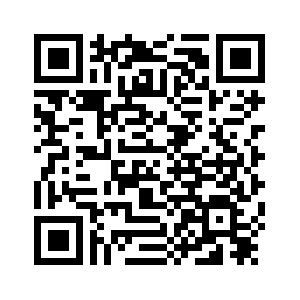 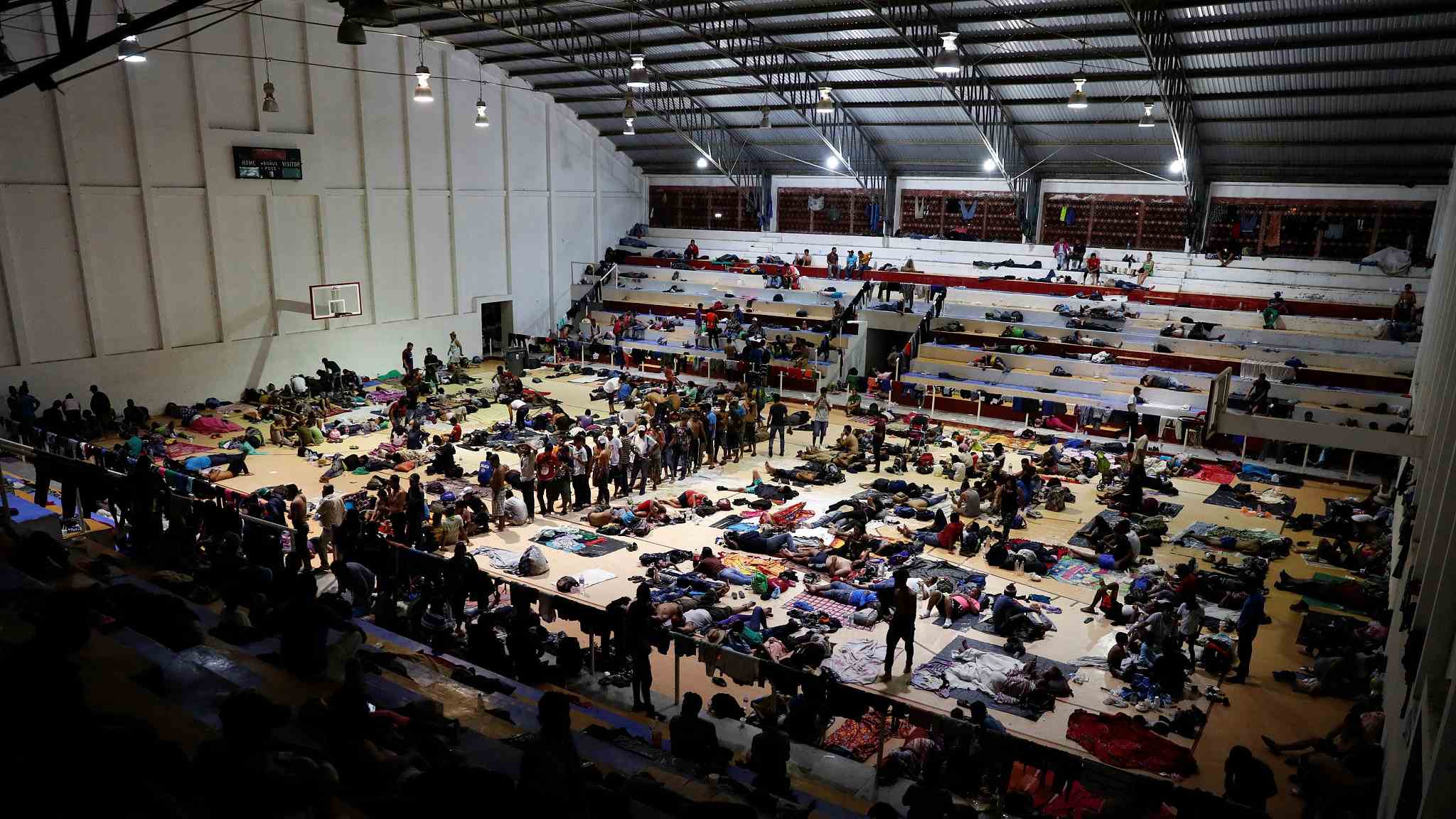 Thousands of Central American migrants traveling in a caravan arrived in the Mexican capital on Monday and began to fill up a sports stadium, still hundreds of miles from their goal of reaching the US a day before midterm elections.
By afternoon 2,000 or more arrived at the Jesus Martinez stadium, which has a capacity of about three times that, and eagerly began sifting through donations of clothes, gave themselves sponge baths, lunched on chicken and rice under the shade of tents and picked up thin mattresses to hunker down for the night.
Many went to medical tents to get treatment for blistered and aching feet, illness and other maladies. "Since we got here, we have not stopped," said Tania Escobar, a nurse with Mexico City's public health department. 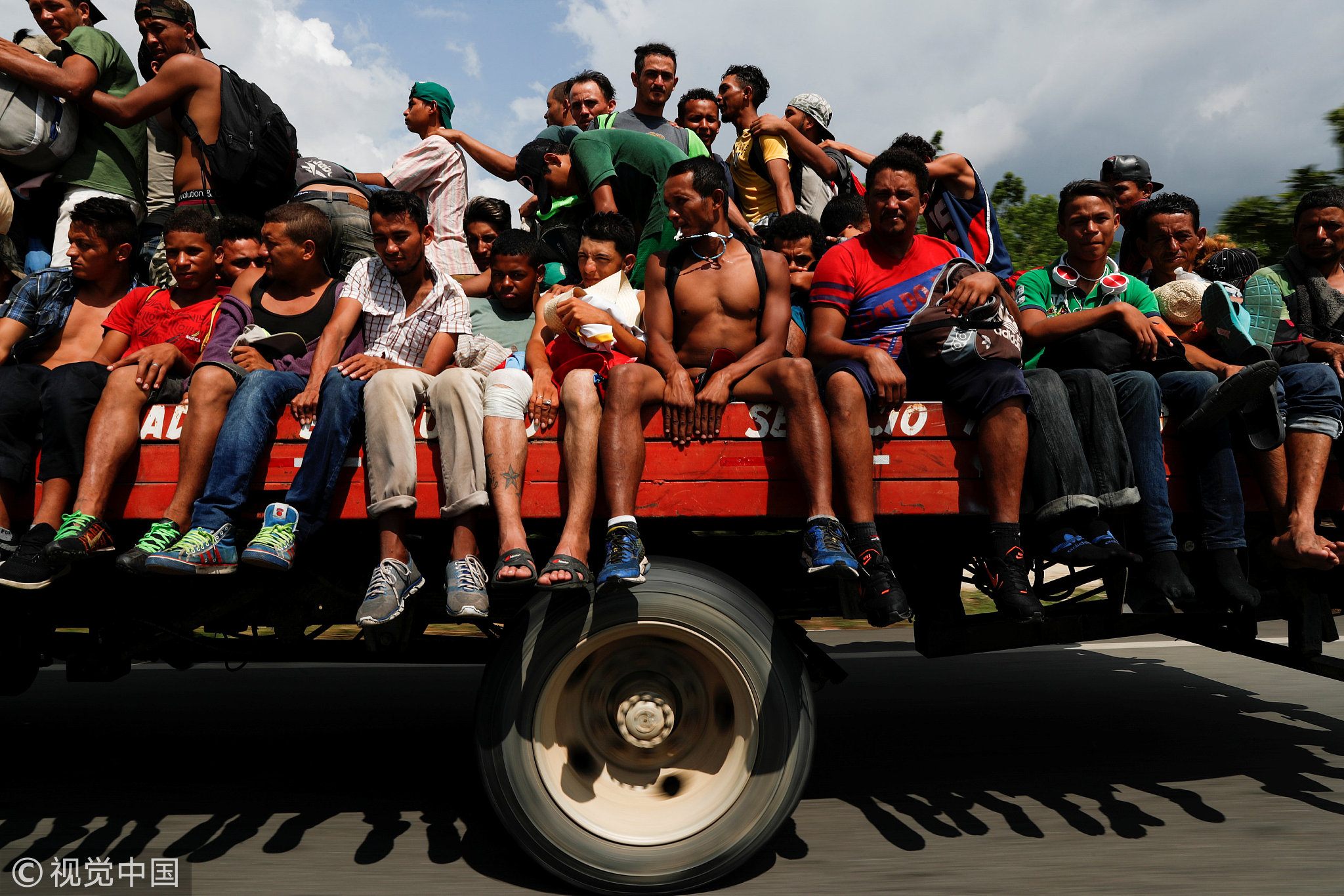 Migrants en route to the US in a truck from Pijijiapan to Arriaga, near Tonala, Mexico, November 4, 2018. /VCG Photo

Migrants en route to the US in a truck from Pijijiapan to Arriaga, near Tonala, Mexico, November 4, 2018. /VCG Photo

Melvin Figueroa, a 32-year-old from Tegucigalpa, Honduras, was traveling with his pregnant wife and two children, 6 and 8. He brought the 6-year-old girl to the tent because her eyes were irritated and "she throws up everything she eats."
Several thousands more migrants were trudging along the highway between the city of Puebla and the capital, catching a lift from passing vehicles when possible.
Nashieli Ramirez, the ombudsman for the city's human rights commission, said the city was preparing to accommodate as many as 5,000 migrants from the lead caravan and several smaller ones hundreds of miles behind it, for as long as necessary.
"We have the space in terms of humanitarian help," said Ramirez.
As US election day neared, Trump has seized on the caravan and portrayed it as a major threat, even though such caravans have happened regularly over the years and largely passed unnoticed. 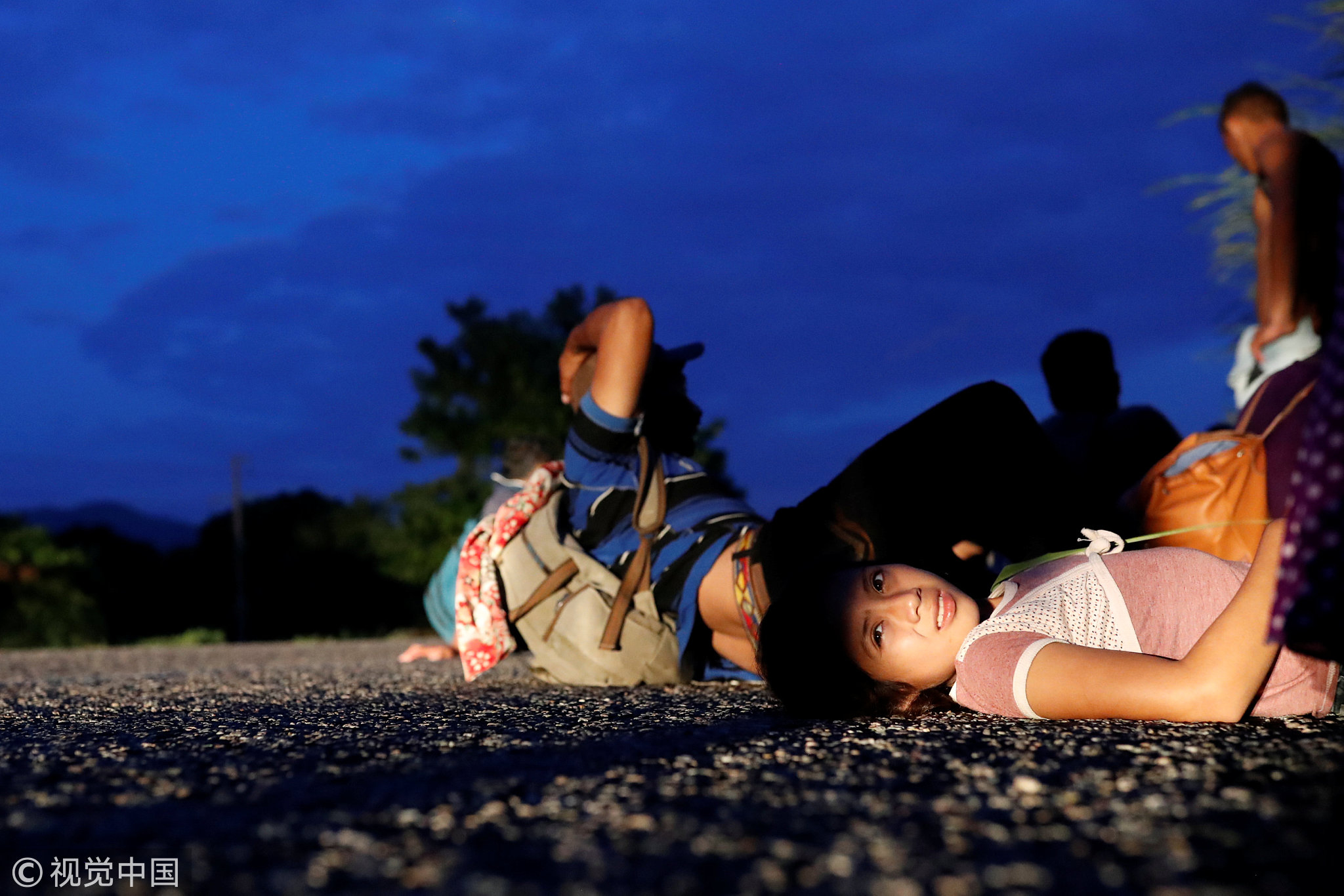 Migrants rest during a stop along their journey from Arriaga to Tapanatepec, near Arriaga, Mexico, November 5, 2018. /VCG Photo

Migrants rest during a stop along their journey from Arriaga to Tapanatepec, near Arriaga, Mexico, November 5, 2018. /VCG Photo

He ordered thousands of troops to the US-Mexico border when the migrants were still hundreds of miles to the south, threatened to detain asylum seekers in tents cities and has insinuated without proof that there are criminals or even terrorists in the group.
In dozens of interviews since the caravan set out from Honduras more than three weeks ago, migrants have said they are fleeing rampant poverty and violence. Many are families traveling with small children. Some say they left because they were threatened by gang members or had lost relatives to gang violence; others say they hope to work, secure a good education for their children and send money to support loved ones back home.
Alba Zoleida Gonzalez, 48, from Valle, Honduras, said she had walked for five hours and hitched a ride on a tractor-trailer with about 150 people. Her calf muscles were aching, but that was a small price to pay for the chance at a life better than the one back home.
"I looked for work, and nothing," Gonzalez said, adding that her husband had been robbed and had to hand over everything he made by selling crabs so his assailants wouldn't do worse. "And when one does find a little job they kill you for the money," she said. 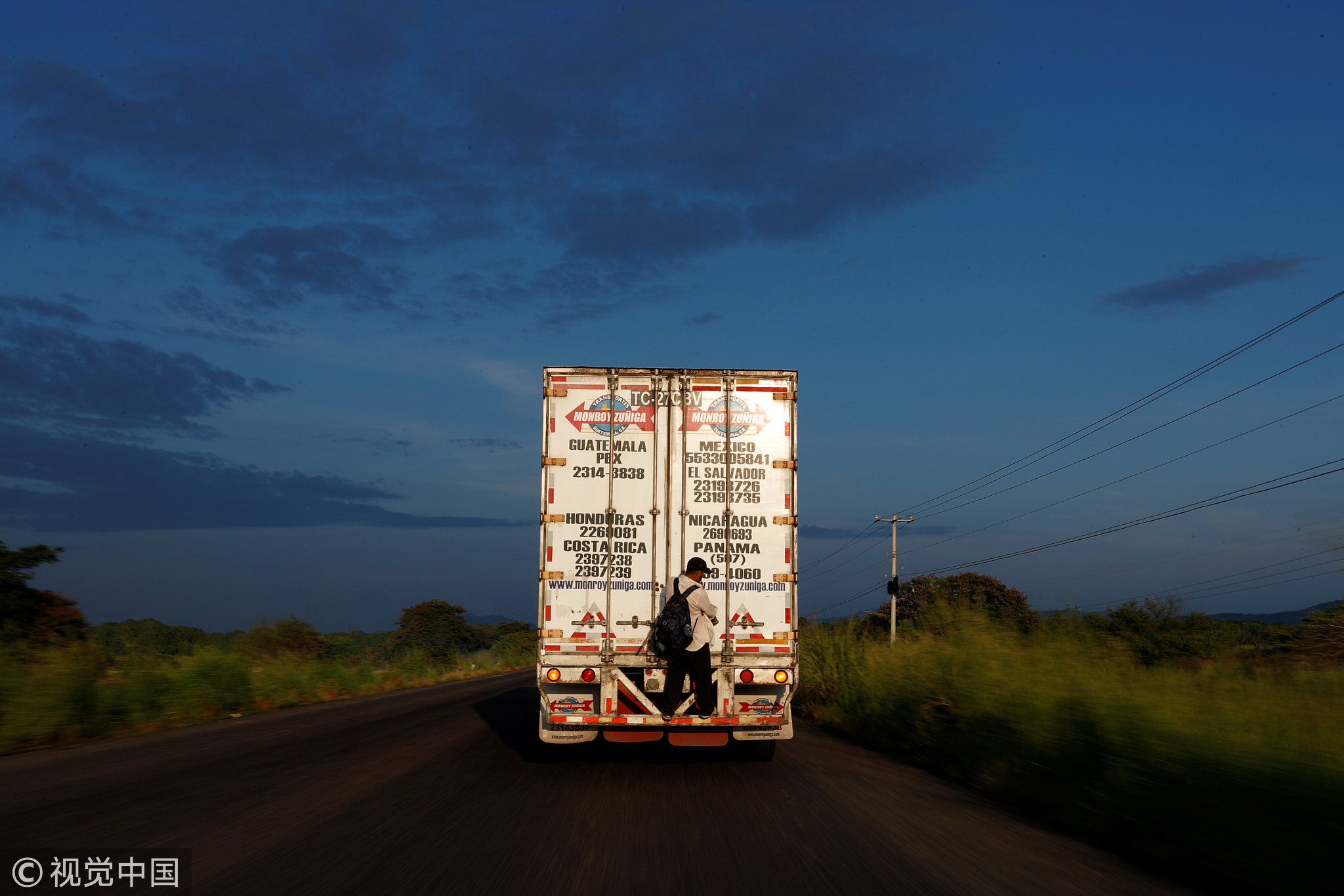 Honduran migrant hangs from the back of a truck as he takes part in a caravan heading to the US, Tapanatepec, Mexico, November 5, 2018. /VCG Photo

Honduran migrant hangs from the back of a truck as he takes part in a caravan heading to the US, Tapanatepec, Mexico, November 5, 2018. /VCG Photo

Arriving in Mexico City, some migrants stopped at the Basilica of Our Lady of Guadalupe, a major pilgrimage site, to thank the Virgin Mary for watching over them during the journey.
Many had struck out ahead of the larger caravan but intended to regroup in the capital. Oscar Ulloa, 20, an accountant from Honduras, said he arrived by bus from Puebla thanks to handouts from Mexicans. He expected the group would assemble and vote in the coming days on their next moves.
The 286-kilometer-long trek on Monday from the Gulf state of Veracruz to Mexico City was the longest single-day journey for the group of about 4,000 migrants.
But there were obstacles on this latest stretch.
Truck after truck denied the migrants rides as they trudged along the highway into the relatively colder November temperatures of central highland Mexico.
(Cover photo: Migrants, part of a caravan en route to the US, queue up to receive food, Jesus Martinez stadium, Arriaga, Mexico, November 4, 2018. /VCG Photo)
Source(s): AP