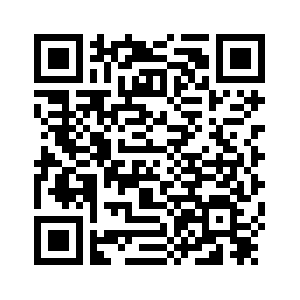 Editor's note: Chen Wenhong is an associate professor of Media and Sociology, co-director of the Media and Entertainment Industries Program at the University of Texas at Austin. The article reflects the author's opinion, and not necessarily those of CGTN.

First via private jet, then ferried by helicopter over the snow-capped Swiss Alps, global political, business, and civil society leaders met at the World Economic Forum (WEF) in Davos, Switzerland, last week. Protected by soldiers and snipers on the roof of hotels whose rooms could cost 10,000 U.S. dollars a night, they were to address Globalization 4.0, the WEF 2019 theme.
Most people may have to google the definition of Globalization 4.0 and its relationships with the three previous versions of globalization. Yet, according to Dr. Klaus Schwab, WEF founder and executive chairman, Globalization 4.0 is already here. Sounding like a prophet in the desert, Dr. Schwab further warns the world that it is not well prepared for Globalization 4.0.
By Globalization 4.0, Dr. Schwab, seems to mean the fundamental transformations and challenges due to the 4th Industrial Revolution characterized AI, self-driving cars, or IoT.
In an article published in Foreign Affairs on January 16, 2019, Dr. Schwab characterizes globalization 4.0 as the “complete digitization of the social, the political, and the economic”. At its core, Dr. Schwab sees “the connectivity of national digital and virtual systems and the related flow of ideas and services”.
According to him, a new version of globalization needs a new global governance infrastructure beyond merely tinkering. The current one, designed by the U.S. and its allies after the Second World War, has become obsolete, in contrast to the inevitability, imminence, and profound impacts of Globalization 4.0, coupled with the rise of a multipolar world order, climate change, and inequality.
Not surprisingly, the second half of the WEF 2019 theme was “shaping a global architecture in the age of the 4th Industrial Revolution”. 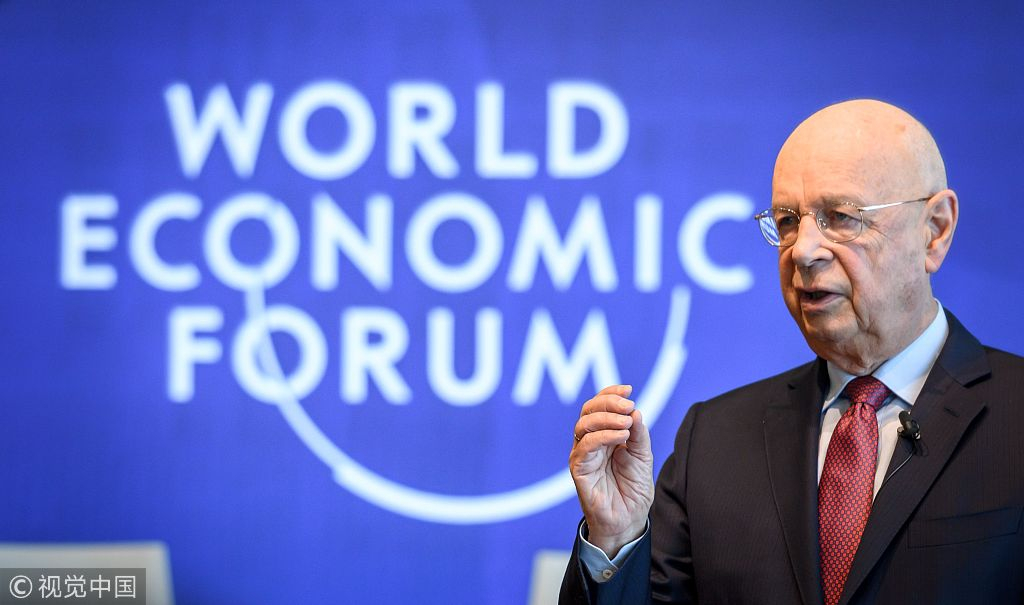 Klaus Schwab gives a press conference ahead of the 2019 edition of the annual meeting of the World Economic Forum in Geneva, January 15, 2019. /VCG Photo

Klaus Schwab gives a press conference ahead of the 2019 edition of the annual meeting of the World Economic Forum in Geneva, January 15, 2019. /VCG Photo

In the Foreign Affairs article, Dr. Schwab argues that the de-globalization solution, especially “a return to national sovereignty” is “wishful thinking” while the continuation of the neoliberal Globalist ideology is no more viable because of the rising populism and anti-globalization sentiments.
Instead, to meet the challenges of technological advancement, Dr. Schwab calls for a new global governance that builds on 1) the inclusiveness that engage all relevant players, 2) the preservation of social and national cohesion, and 3) the coordination through shared objectives rather than a common strategy. Moreover, he describes the world as the oyster of global tech giants whose “upper user limit is nothing less than the entire global population.”
However, major nations seem not interested in a retreat of nation state power any time soon. Key Western leaders such as the U.S. president, the French president, or the British prime minister were no show at Davos 2019, occupied with domestic discontent of globalization.
The U.S. Secretary of State Michael Pompeo, channeling President Trump via a video speech addressing WEF 2019, declared that “We are embracing time-tested truths. Truths like this: Nations matter.” China's Vice President Wang Qishan, in his speech, made it clear that "It is imperative to respect national sovereignty and refrain from seeking technological hegemony.”
As to the U.S. and Chinese tech giants, their rollercoaster stock prices since spring 2018 as the U.S.-China trade dispute meanders and their efforts of global expansion as a result of slow domestic growth only highlight the visible hand of the state holding the oyster. 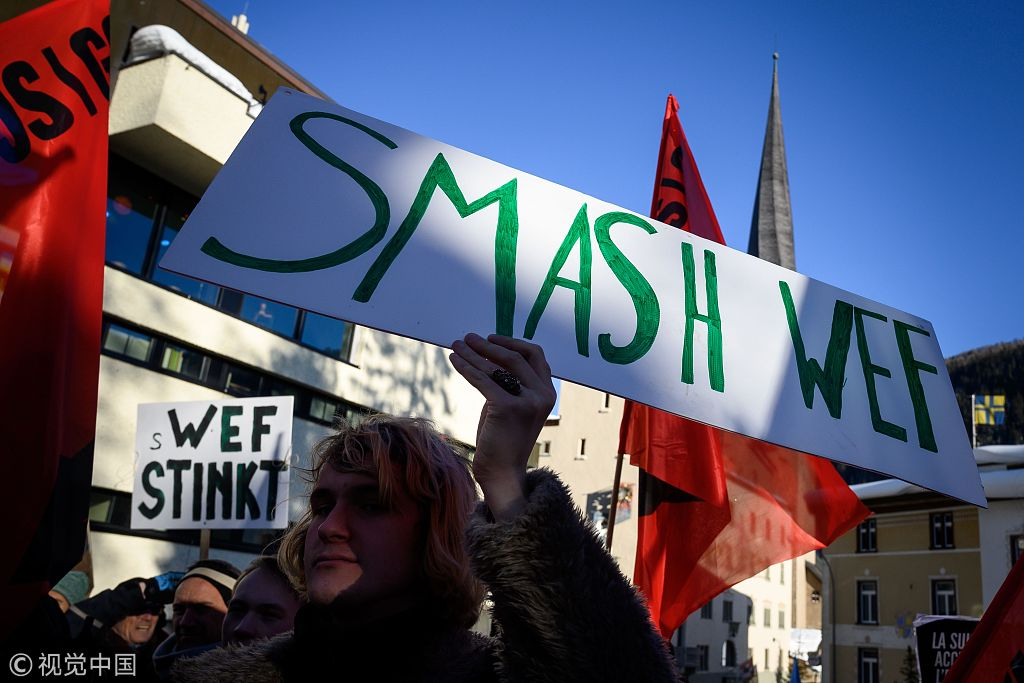 A protest against the WEF annual meeting in Davos,  ‍Switzerland,  January 24, 2019. /VCG Photo

A protest against the WEF annual meeting in Davos,  ‍Switzerland,  January 24, 2019. /VCG Photo

To be sure, in Globalization 4.0, national comparative advantages come from making chips rather than making it cheap. If it had been primarily blue-collar workers in the developed world who bore the brunt of the negative impacts of globalization on employment and income, it is now the turn of white-collar workers as what would be traded more is service rather than physical goods.
That is, not only the coal-miners but also the data-miners, not only the steel workers but also the social workers, face competitions from emerging markets. Worse yet, any physical wall along national borders might not help much as telework does not require migration.
For Dr. Schwab and his Davos friends to promote inclusion, cohesion, and coordination, three things that do not necessarily always go hand in hand, the question is not whether nation states still matter but how leaders of nation states could use policy imagination to find a better balance of growth and equality, at home and in the world.
(If you want to contribute and have specific expertise, please contact us at opinions@cgtn.com.)‍