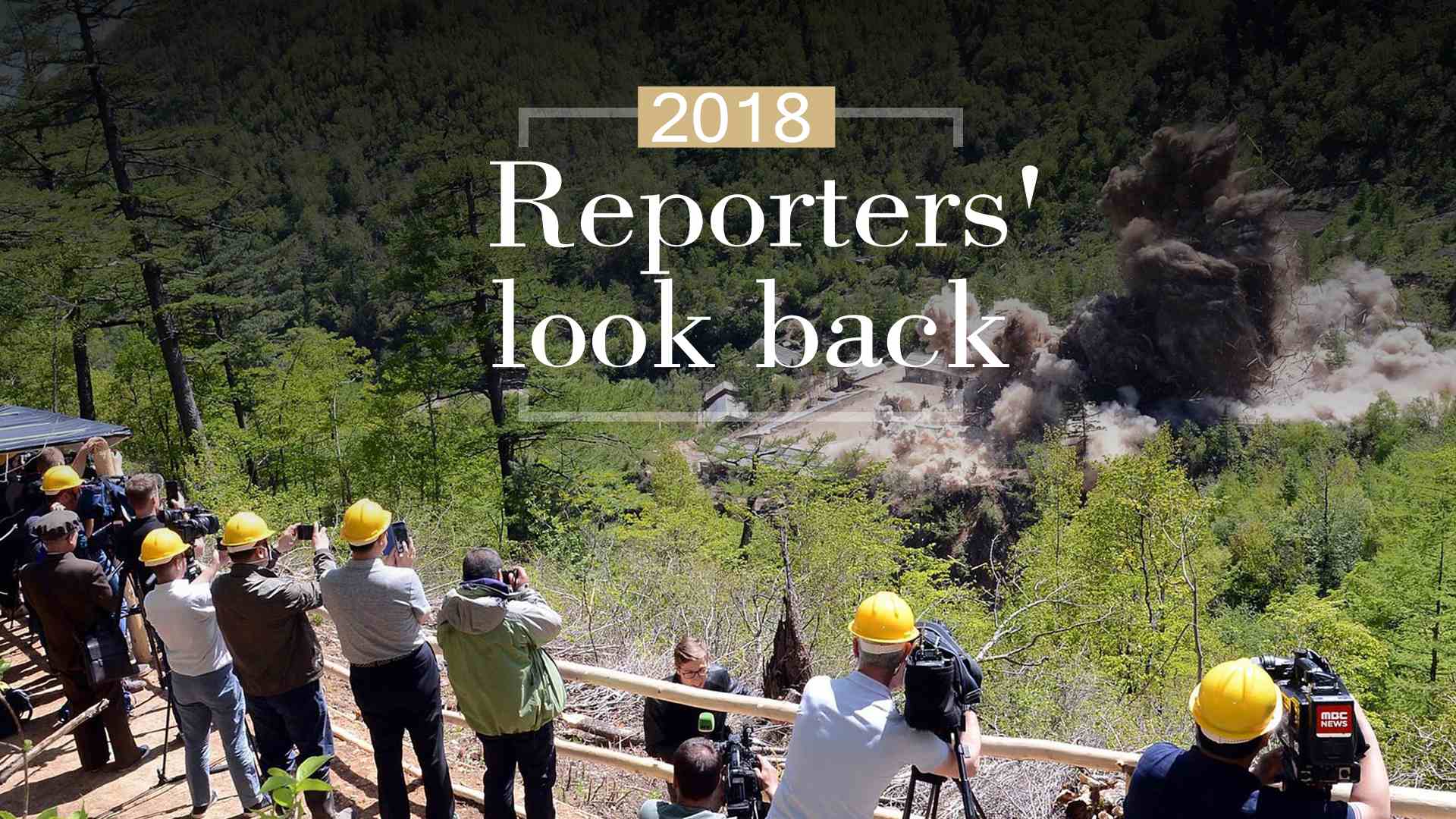 ‍‍With several huge explosions in the heavily guarded mountains of Punggye-ri on May 24, 2018, the Democratic People's Republic of Korea (DPRK) blew off its only nuclear test site in front of the eyes and cameras of around 30 reporters from China, the U.S., Russia, the UK and the Republic of Korea.
I was one of them.
In the secretive country and the site where six nuclear bombs exploded, I experienced the most dramatic 48 hours of my life. 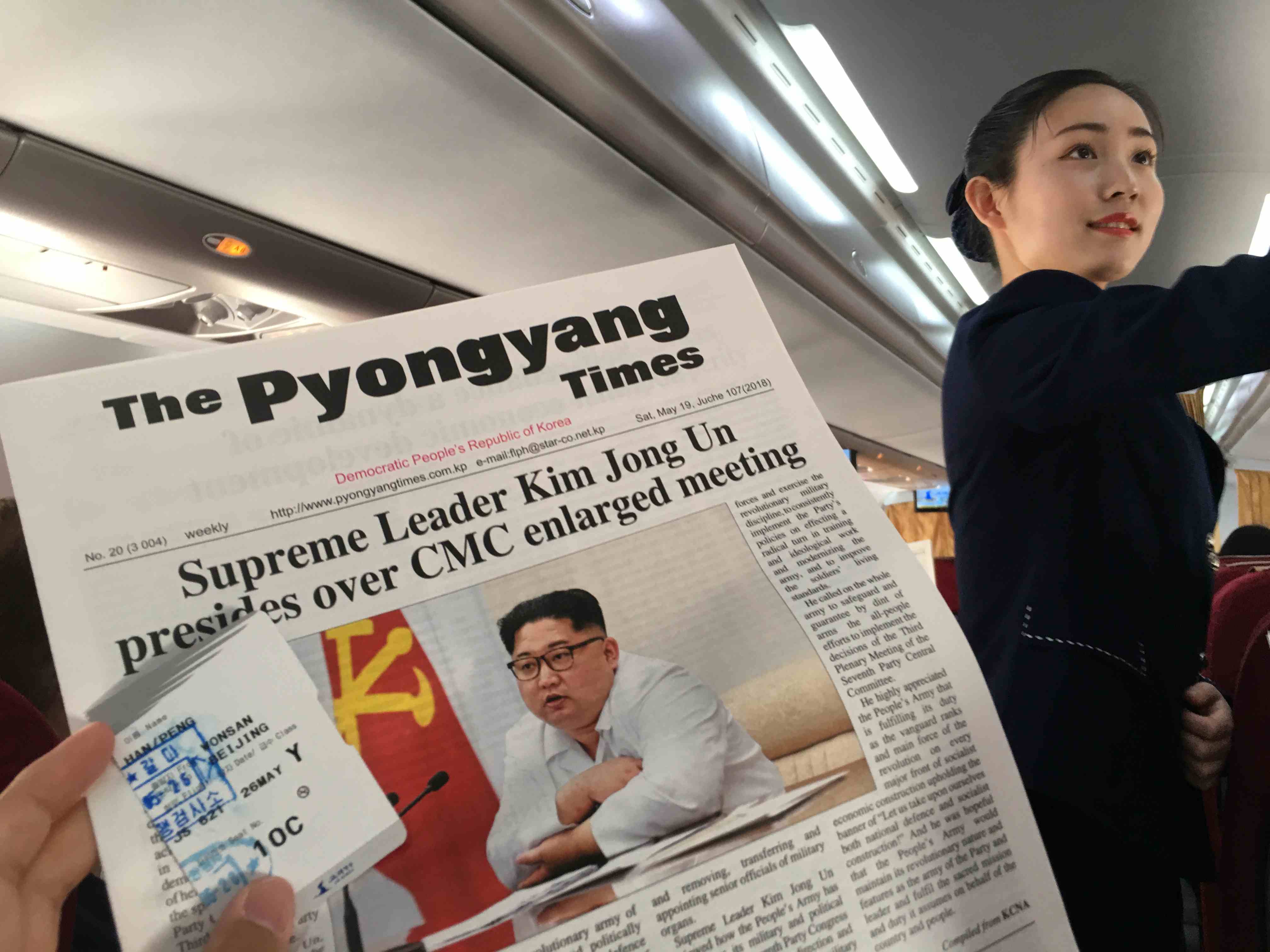 Inside the chartered flight from Beijing to DPRK's coastal city of Wonsan. /CGTN Photo‍

Inside the chartered flight from Beijing to DPRK's coastal city of Wonsan. /CGTN Photo‍

6:00 p.m. May 23 to 5:00 a.m. May 24
Chartered train and sealed windows
On the afternoon of May 23, we boarded a green train from the DPRK's eastern coastal city of Wonsan. Running for 11 hours toward the Punggye-ri nuclear site, the long train carried no one else but the carefully selected international reporters and accompanying DPRK officials.
From outside, the train looked no different from what China had used as passenger trains before it began to build its nationwide high-speed railway system a decade ago. But after getting inside, we immediately found all the windows were shut tight and sealed off with thick curtains.
01:19 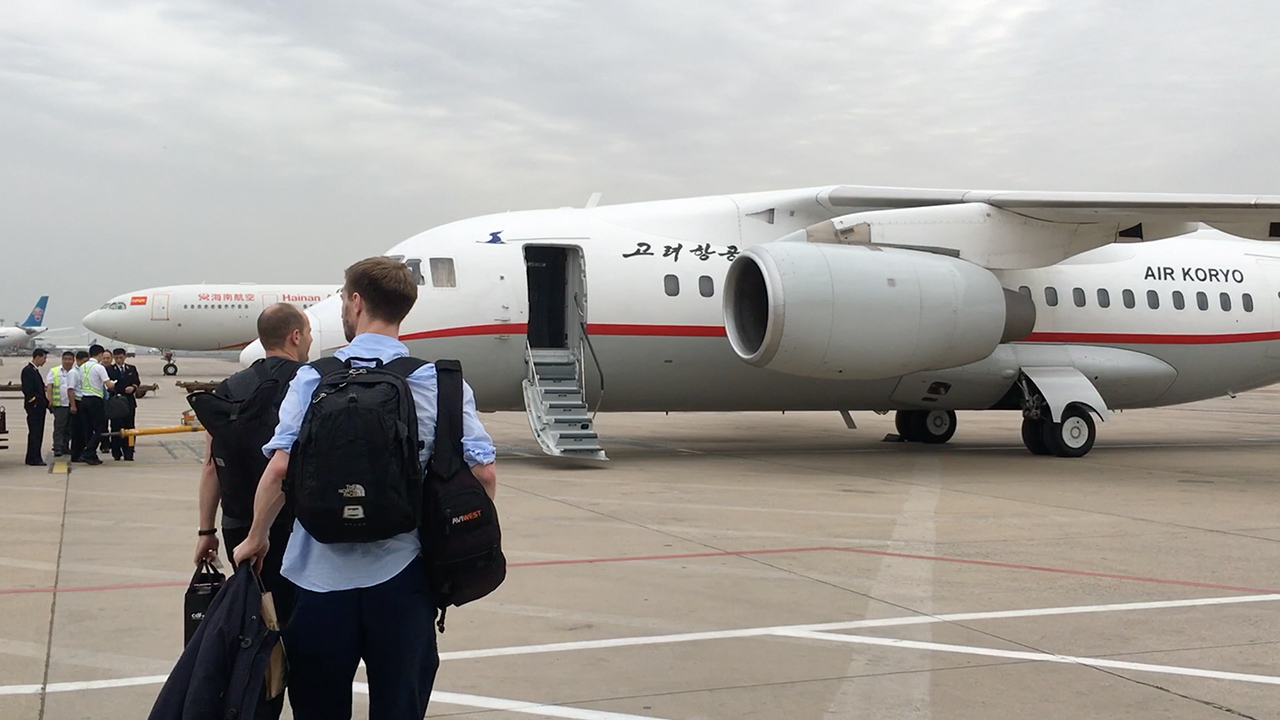 The DPRK officials told us we were not allowed to peek, let alone film out of the windows, or we would face consequences. Was it because there were military facilities crucial for their national security, or simply because they did not want us to see more of their country?
Here is a short video clip of the train. I shot it on my smartphone.
00:27 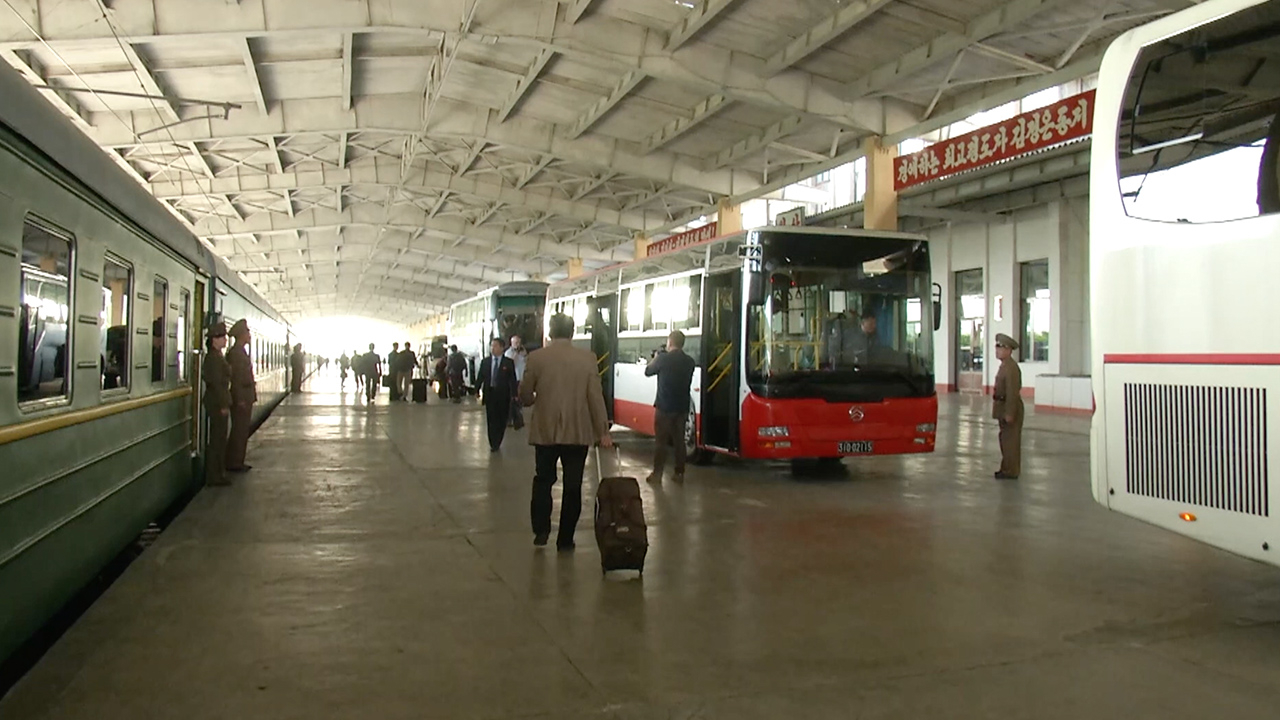 7:00 a.m. to 4:00 p.m. May 24
Nine historic hours inside Punggye-ri nuclear site
After a night sleeping to the rhythmic sounds of rail clatter, we woke up to find sunlight sneaking through the thick curtains. Around 5:00 a.m., we were sure the train had stopped.
The DPRK officials reappeared before us, and told us to pack up and get off the train.
Breathing the brisk air outside the train and seeing the wild mountains at the end of a railway, we realized that we were now in a no-man zone – closer to any foreigner could have ever gotten to the DPRK's nuclear testing ground.
Reporters then got onto several jeeps which zigzagged for about an hour on the bumpy mountainous trails with numerous military checkpoints. The windows were not sealed, but closely watched by the DPRK officials. We understood that if we ever dared to shoot footage of them, they would not hesitate to shoot us.
When the jeeps stopped, we arrived at a flat area in the mountain. It wasn't until then that I found that all the entrances of the underground nuclear tunnels were just within a few hundred meters around us. They were not easily noticeable from the outside, but once a nuclear bomb was tested inside, the tremor of the man-made earthquakes could be felt in China.
Dubbed Tunnel No. 1, 2, 3, 4, the DPRK built at least four underground tunnels in the mountains of Punggye-ri. They carried out six nuclear tests since 2006 inside these tunnels. And now, they told us that they would "dismantle" all of them with explosions before our eyes. 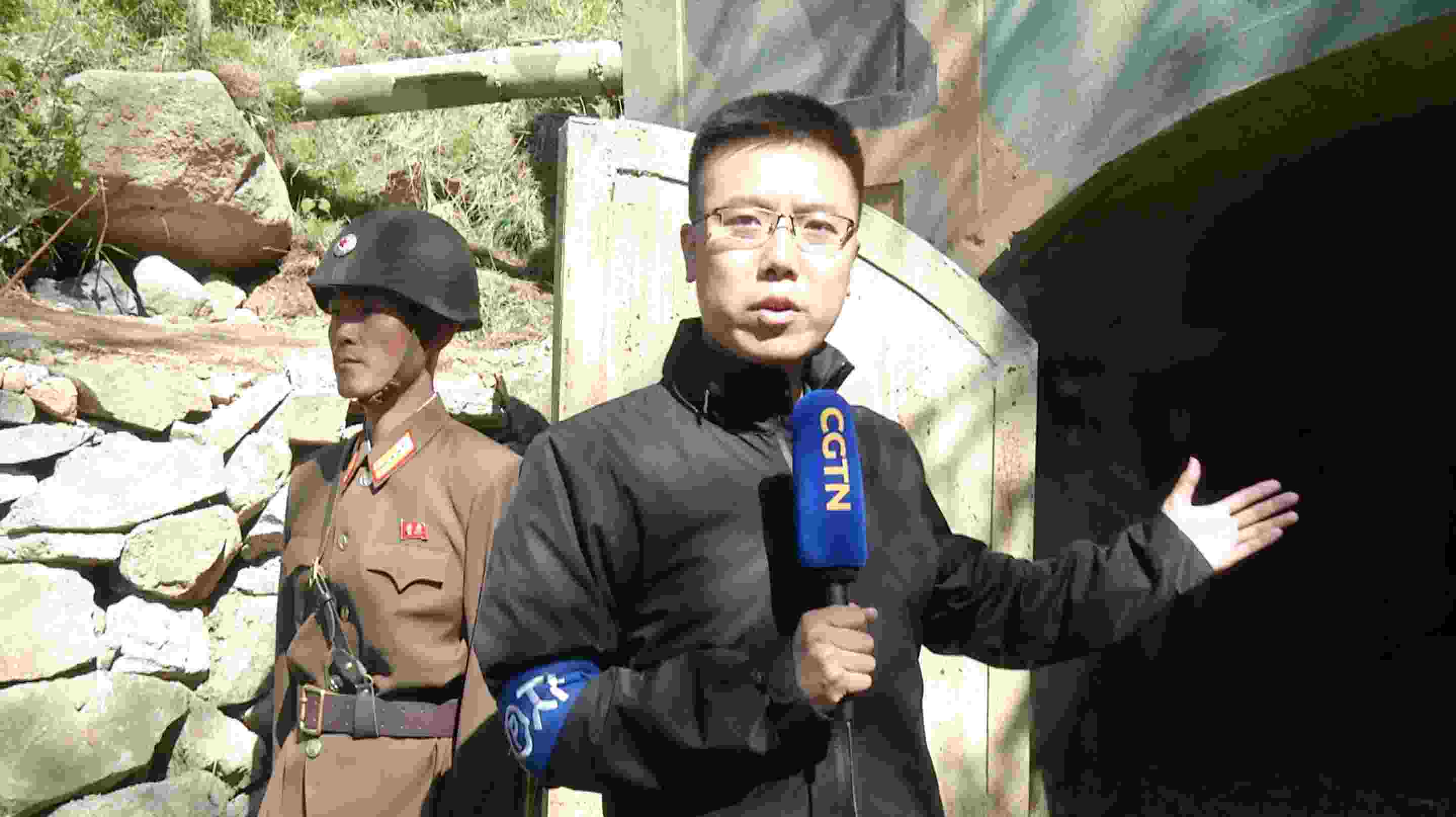 Han Peng reports in front of Punggye-ri Tunnel No. 2, where the DPRK carried out five out of all its six nuclear tests, including the most recent in 2017, after which Pyongyang announced it had detonated a hydrogen bomb able to be carried by an ICBM (intercontinental ballistic missile). /CGTN Photo

Han Peng reports in front of Punggye-ri Tunnel No. 2, where the DPRK carried out five out of all its six nuclear tests, including the most recent in 2017, after which Pyongyang announced it had detonated a hydrogen bomb able to be carried by an ICBM (intercontinental ballistic missile). /CGTN Photo

The footage of the powerful explosions we captured was impressive enough to compete with Hollywood movies. But without independent weapon experts on the ground, we as reporters could hardly verify whether the facilities were fully dismantled.
Despite the difficulties in verification, the DPRK officials appeared very sincere to us. They brought us close to one tunnel after another, and explained in great detail what each of them was built for. Then they left us with enough time to shoot footage of everything we needed before they led us to the other side of the mountain. There, they had already erected wooden observation platforms. They waited patiently until all of us got our cameras ready, before they counted down and pressed the button.
Did radioactive materials leak out after over a decade of repeated nuclear tests? We were not sure. The DPRK customs had confiscated all the Geiger counters from reporters the moment we landed at Wonsan airport, which raised suspicion and doubt.
On the site, I asked the DPRK officials. This time they weren't so patient, but repeated the same rhetoric and quickly left: "There were neither radiation leaks nor adverse impact on ecological environment."
Personally, I did a medical check for radiation after we returned from the DPRK, and it seemed that all of my health indicators were fine.
00:35 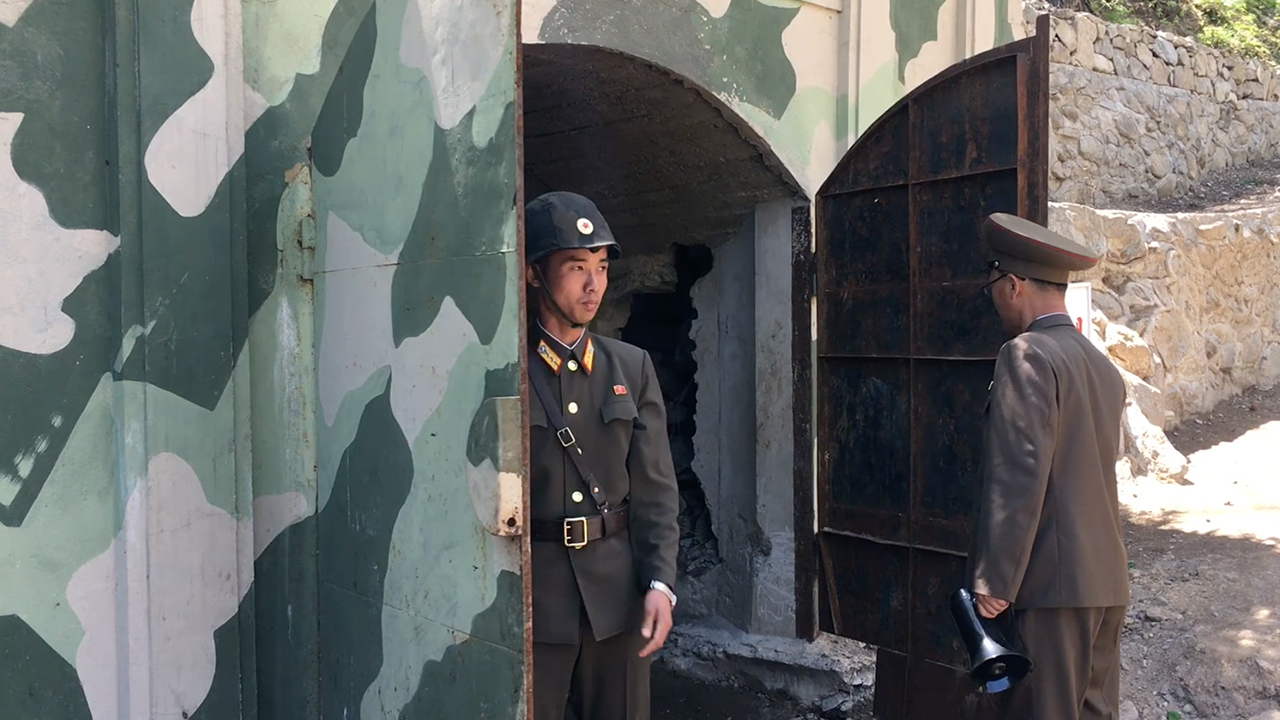 7:00 p.m. May 24 to 3:00 p.m. May 25
Back on train, real drama began
The DPRK was indeed an information black hole. Throughout the day of May 24, the mountains in Punggye-ri shook as the DPRK blasted one nuclear tunnel after another, but the world did not notice a trace. No reporters could tell the outside world because there was no mobile phone signal in Punggye-ri.
Back on the train at 7:00 p.m., it was only after 9:00 p.m. when our mobile phones began to receive some signal on our way back to Wonsan on the slowly moving train.
I immediately called CGTN headquarters in Beijing and spoke the following sentence as fast as I could before the signal went dead again: "Confirmed: all blown, but we cannot verify if they were fully dismantled."
It was a few hours later until we were reconnected again. My Beijing colleague then told me another piece of seismic breaking news: Trump announced he was canceling the Trump-Kim Summit.
I broke the news to the DPRK officials on the train, and it was a moment of awkwardness. Throughout my stay in the country, I learned that the DPRK people would not comment on political issues, except saying they fully support their dear leader Kim Jong Un's decisions. But what about a decision that was not made by Kim but was at the same time critical to him?
00:22 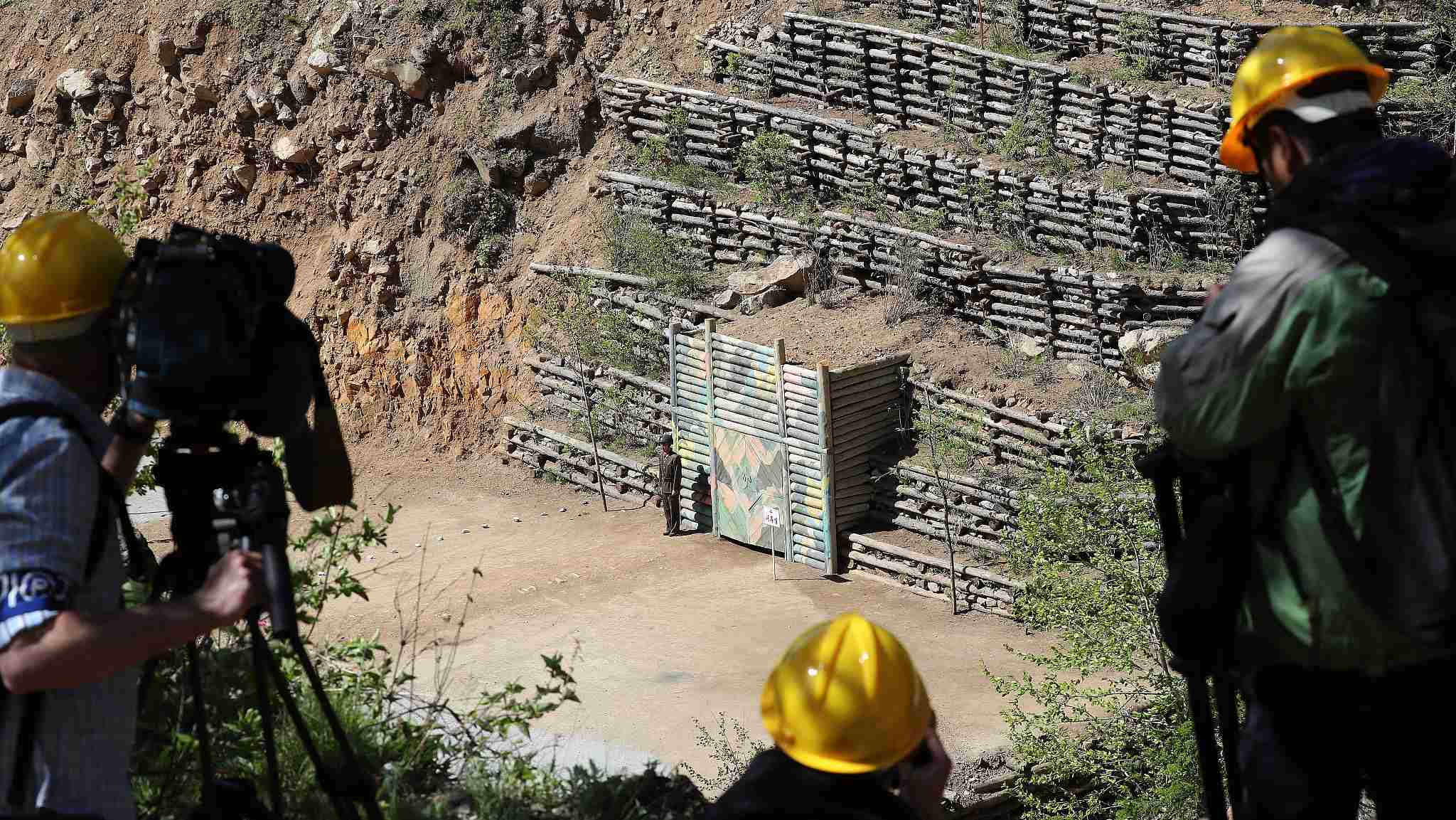 The DPRK officials first looked at me with disbelief. After they realized I was not joking, they tried to say something, but held back in front of me. Then one of them raised his head and offered their only verbal response to me: "Did you just say the U.S. President will not meet with our dear leader?"
He heard what I said. Then a moment of silence, and I saw in his eyes a sense of disappointment. And the shockwaves began to be sent throughout the train.
On the morning of May 25, the train slowly arrived at Wonsan railway station. We rushed to the hotel (where there was Internet) to check the latest response from Pyongyang. To our surprise, no angry statement. Pyongyang said that they appreciated Trump's “unprecedented” move as a U.S. President to reach out to Kim.
But at around 2:00 in the afternoon, the DPRK suddenly cut off Internet access and surrounded us within the hotel. Soldiers marched into our office and told us to close the curtains and not to look outside.
House arrest, holding us as hostages, or worse? These were some of the first thoughts of some of the Western reporters. I checked with a Chinese reporter beside me who spent years working in the DPRK, and she said she had never encountered a similar scenario before.
But just an hour later, everything went back to normal. There was no explanation in any form of what happened and why. It was only after we returned to China on May 26 that I received a push notification on my smartphone: According to the DPRK state-run media, Kim Jong Un had “recently” (no clear date indicated) inspected Wonsan and ordered the coastal city to accelerate the construction of international tourism facilities.
Was that “surprise visit” the reason for the sudden blockade? We can never know. Was that a sign that the DPRK wanted to open up? We'd have to wait and see.
The 48 dramatic hours put more questions than answers in our minds. But what impressed me most was none of the drama above, but the DPRK officials who accompanied the reporters.
They all spoke fluent foreign languages. The one with the Chinese reporters was in his 30s. He had probably visited more Chinese cities than an average Chinese citizen. He made native Chinese jokes and chatted with me about a local restaurant in Beijing, a fancy rooftop bar in Shanghai, and the life in a small village of northeast China's Liaoning Province. He cared about his country, his wife and children, and his personal pursuit no less than any of us.
If this is the profile of a young and low-ranking DPRK official, we'd better assume that Pyongyang's latest moves were not a result of inexperienced politicians answering to populist calls or a personality cult, but a decision shaped by well-traveled and well-informed diplomats after a string of sophisticated calculation.