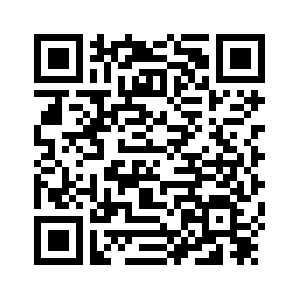 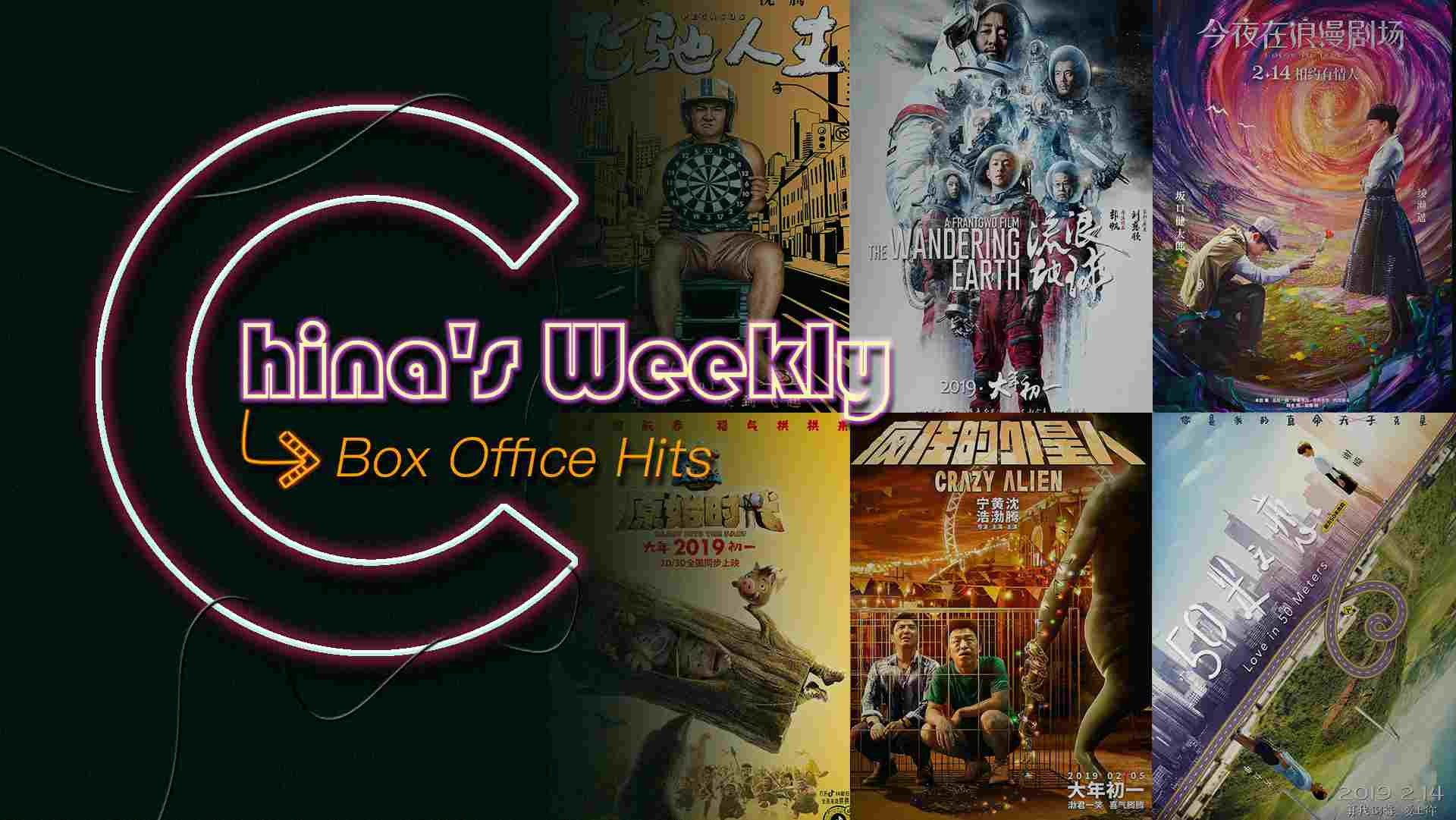 China's Spring Festival season has long been seen as a key battlefield in the eyes of filmmakers. This year was no exception.
The domestic box office raked in 5.8 billion yuan (850 million U.S. dollars) from February 4 to 10, breaking the Spring Festival box office record, according to Maoyan, a leading Chinese online movie ticketing website. 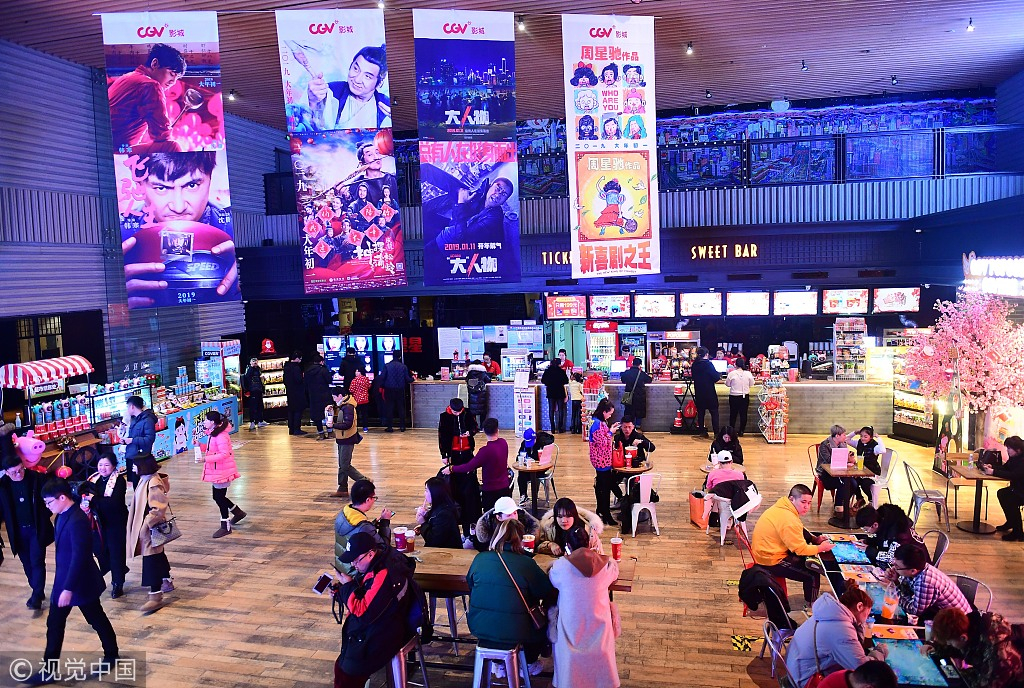 Moviegoers in the lobby of a cinema in Shenyang, northeast China's Liaoning Province, February 6, 2019. /VCG Photo

Moviegoers in the lobby of a cinema in Shenyang, northeast China's Liaoning Province, February 6, 2019. /VCG Photo

"The Wandering Earth" alone accounts for more than one-third of the revenues having exceeded 2 billion yuan, followed by "Crazy Alien" and "Pegasus," which grossed 1.5 billion yuan and one billion yuan respectively.
The ticket sales on February 5, the first day of the Chinese New Year when eight films premiered, reached 1.4 billion yuan, a new daily sales high, for a  mix of 14 old and new films.

Leading the pack on February 5 was the sci-fi comedy "Crazy Alien." Having a line-up of famous director Ning Hao and top comedians Huang Bo and Shen Teng, the film successfully stimulated people's desires by achieving considerable sales of 41 million yuan on its debut. 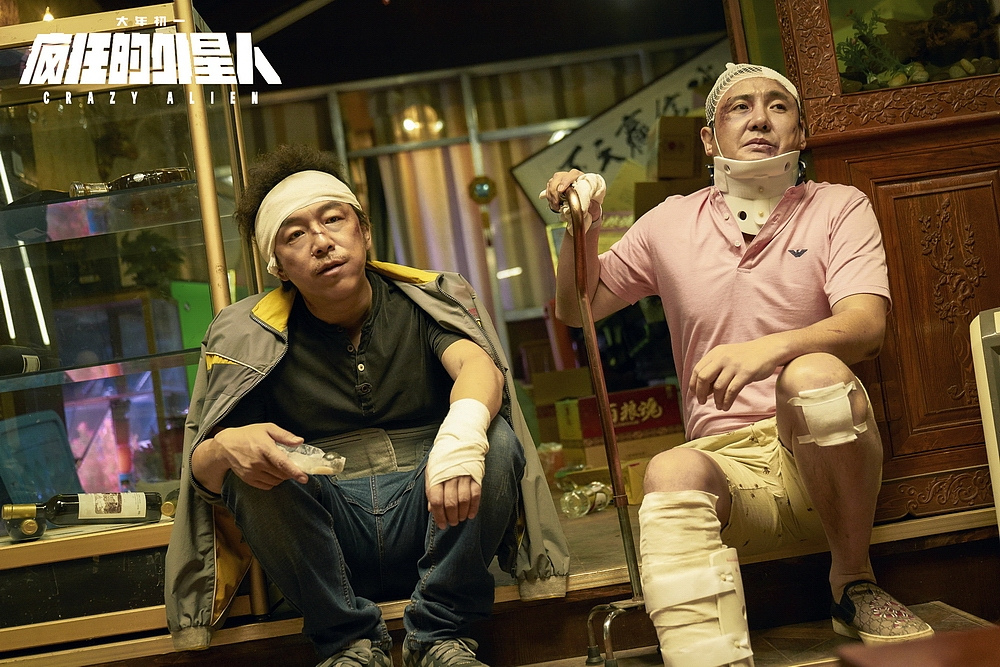 Closely behind it were racing-themed comedy-drama "Pegasus," directed by Han Han who is better known as a writer and speed racer; "The New King of Comedy," directed by comedy master Stephen Chow, and 3D sci-fi adventure "The Wandering Earth".
The situation quickly changed, as audiences were impressed by the fourth-placed "The Wandering Earth" and gave it an extraordinary 9.3 stars out of 10 on Maoyan. Its total box office surpassed that of "Crazy Alien" at 1.18 billion yuan on the fourth day of their screening.
Adapted from Hugo Award winner Liu Cixin's novel of the same name, "The Wandering Earth" offers a Chinese method of saving the earth – to carry it away from the collapsing solar system and find a new home. 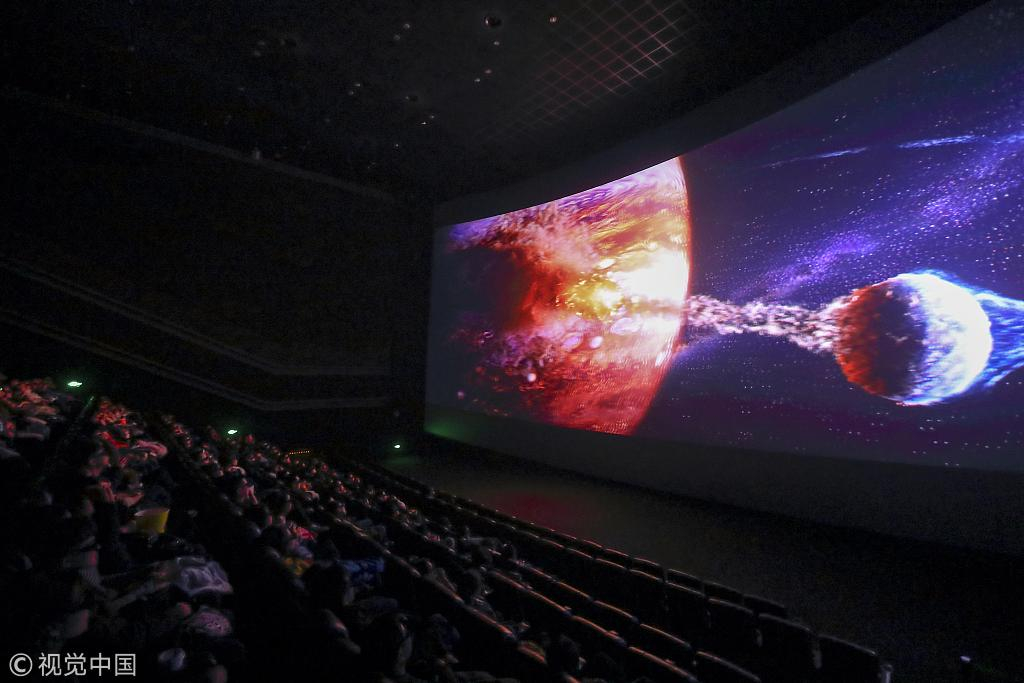 "The Wandering Earth" on the screen of a cinema in Taiyuan, north China's Shanxi Province, February 10, 2019. /VCG Photo

"The Wandering Earth" on the screen of a cinema in Taiyuan, north China's Shanxi Province, February 10, 2019. /VCG Photo

China's first big-budget sci-fi film displays a bold imagination and grand spectacle and conveys profound Chinese-style love towards people and homeland, receiving praise as a "sci-fi movie of epic scale".
Its proportion of the daily screenings across the country increased dramatically, from 13 percent (13 of every 100 films screened) on the first day to 35 percent on February 10, best manifesting that content is the key.
Others were not so successful. "The New King of Comedy" did not reproduce the success of Stephen Chow's 1999 blockbuster "King of Comedy," coming in fourth with takings of 530 million yuan. 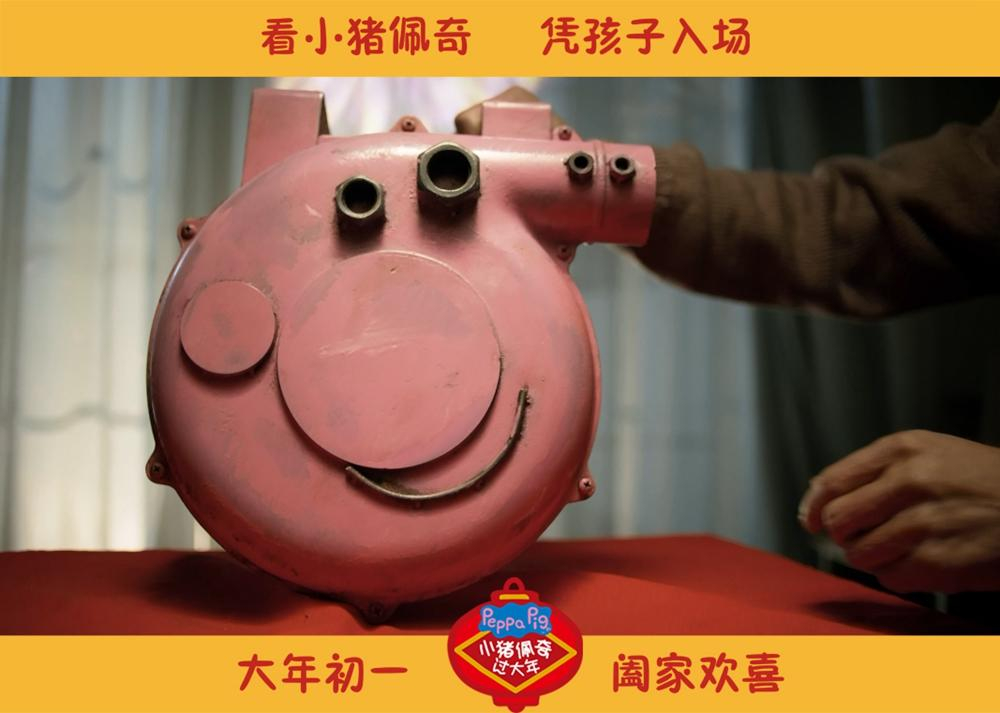 A still from "What Is Peppa Pig." /Photo via Mtime.com

A still from "What Is Peppa Pig." /Photo via Mtime.com

British classic cartoon figure Peppa Pig stormed WeChat moments before the holiday, as "What Is Peppa Pig," a promotional film of "Peppa Pig Celebrates Chinese New Year," stirred Chinese people's nerves by turning the generation gap into a heartwarming familial love story.
However, the Peppa Pig feature failed to copy the promo's success and was defeated by China's own cartoon figure Bonnie Bears, which has hit the screens during the Spring Festival season for six consecutive years.
The sales of the Peppa Pig feature just passed the 100 million yuan line, lagging far behind "Bonnie Bears: Blast into the Past" at 460 million yuan over a week.

A still from "Bonnie Bears: Blast into the Past." /VCG Photo

A still from "Bonnie Bears: Blast into the Past." /VCG Photo

What to see on Valentine's Day?

Valentine's Day is around the corner, so why not take your partner to a cinema for a romantic story?
Four love films will be premiered on the day, including Japanese fantasy "Color Me True," comedy "Love in 50 meters," and two reproductions "Autumn Fairy Tale" and "Fall in Love at First Kiss."
"Color Me True" depicts a young man falling love with a princess, who comes out of from a black-and-white movie. Starring Ayase Haruka and Kentaro Sakaguchi, the film gained great popularity in Japan by earning 1 billion yen (9.1 million U.S. dollars) seven weeks after screening. 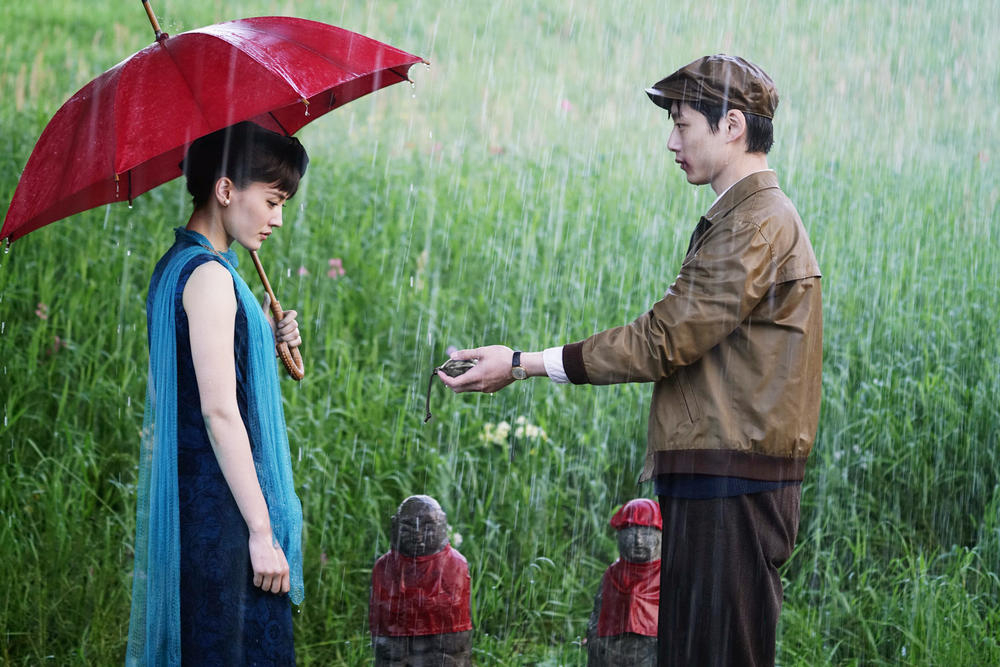 A still from "Color Me True." /Photo via Mtime.com

A still from "Color Me True." /Photo via Mtime.com

To love or to hate, that's a question. Will you accept someone who always brings bad luck to you? That's the dilemma that the heroin in the "Love in 50 meters" faces. The answer is left to you to explore in the film.
Also immersed herself in pain is the leukemia-stricken sister in "Autumn Fairy Tale," who was loved by her beloved brother. The heartbroken story is a remake of 2000's sensational South Korean TV series "Autumn in My Heart," a classic that stays in the memories of many East Asians.
Another story popular in the East Asian cultural circle is a Japanese comic book film "Itazura na Kiss," which has also been adapted into Korean and Chinese TV versions. In "Fall in Love at First Kiss," director Frankie Chen, billed as the godmother of idol dramas in China's Taiwan, will give her own interpretation of the Japanese school romance.