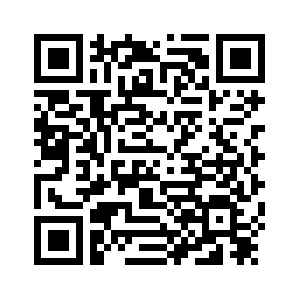 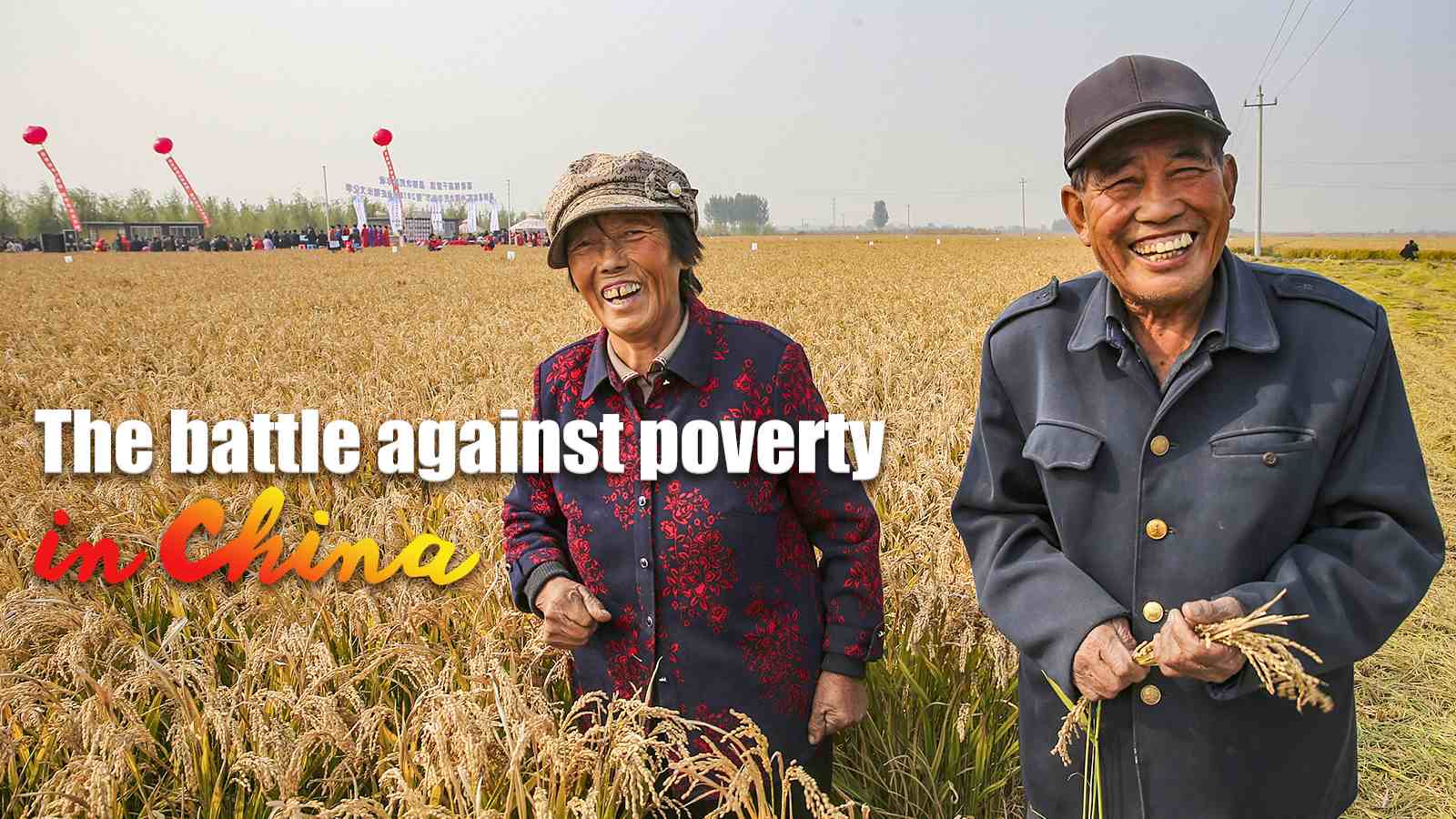 Poverty alleviation has always been on the top of the agenda of the Chinese government. In Chinese President Xi Jinping's words, "On the march towards common prosperity, no one must be left behind."
China's poverty relief battle, the world's biggest and toughest, has made decisive progress.
From 1978 to 2017, China lifted 740 million people in rural areas out of poverty, roughly 19 million each year. More than 68.5 million rural people were lifted out of poverty from 2012 to 2017, which means 37,000 people escaped poverty every single day.
Wednesday (October 17) is set as the annual day for China's National Poverty Alleviation Day. Here's what you should know about how China is using its wisdom to win its battle against poverty.

What criteria does China use to measure poverty?

People with an annual income lower than 2,300 yuan (336.1 US dollars), based on 2010 prices, are defined as living below the poverty line in China.
The Leading Group Office on Poverty Alleviation and Development under the State Council announced on Wednesday that 85 more counties have reached a milestone by having the "impoverished" tag removed, bringing the total number of counties removed from the poverty list to 153 since 2015. 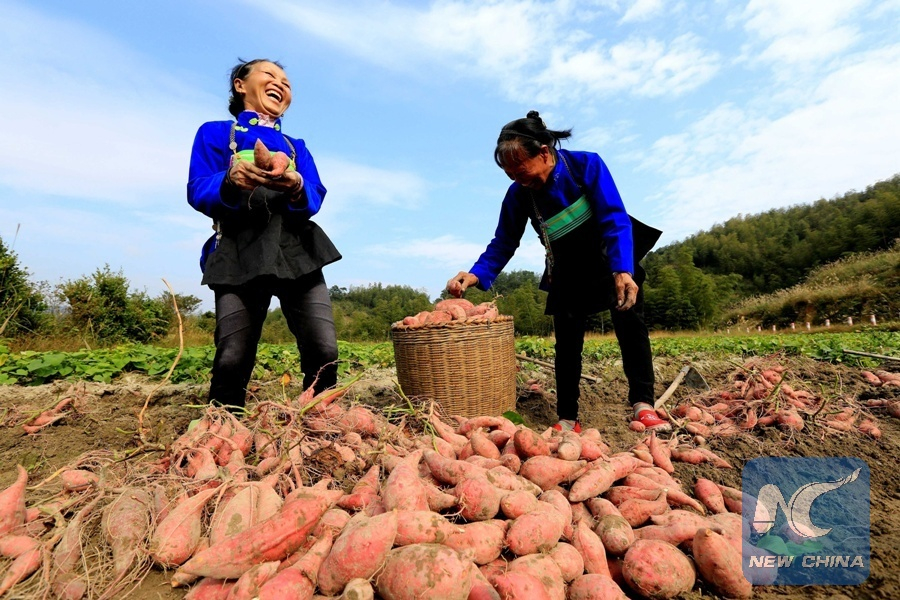 However, removal from the list does not mean poverty relief efforts end, these counties still enjoy favorable policies, subsidies and financial support as well as supervision to ensure further development of these areas.
A county with more than two percent of its population below the national poverty line will be designated as "state poverty county." In western regions, the standard has improved to three percent.
"State poverty county" are eligible for government's preferential policy and financial support for alleviating poverty.

What are China's poverty alleviation targets and what has been achieved?

China aims to lift all rural poor and impoverished counties out of poverty and eliminating absolute poverty by 2020 to build a moderately prosperous society.
That would be 10 years ahead of schedule based on the Sustainable Development Goals set by UN member states. China is also the first developing country to meet the UN's Millennium Development Goal – a 50 percent reduction in the number of people living in poverty by 2015. 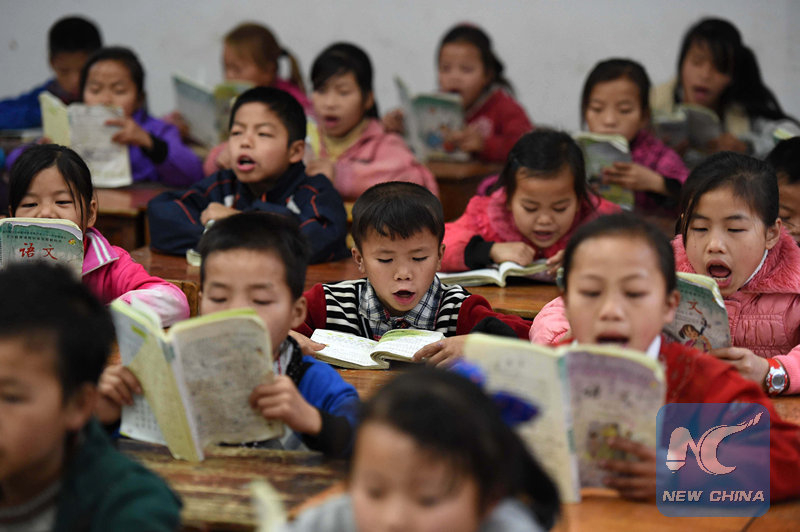 Based on the international 1.9 dollars a day poverty line, during the past 30 years, China has helped 853 million people escape poverty, which accounts for 70 percent of all people lifted out of poverty worldwide.
Thus, the percentage of people living in extreme poverty falling from 1981's 88.3 percent to 2013's 1.9 percent while the world average poverty ratio is 42.3 percent in 1981 and down to 10.9 percent in 2013.
According to China's guideline on winning the battle against poverty released in August, the government identified that China's poverty reduction should guarantee access to food and clothing for poor population and nine-year compulsory education for children from poor families.
Basic medical needs and good living conditions for the poor population should also be guaranteed.
China has made strides in poverty relief since the 18th National Congress of the Communist Party of China (CPC) in late 2012 and following are some facts and figures on China's war against poverty. 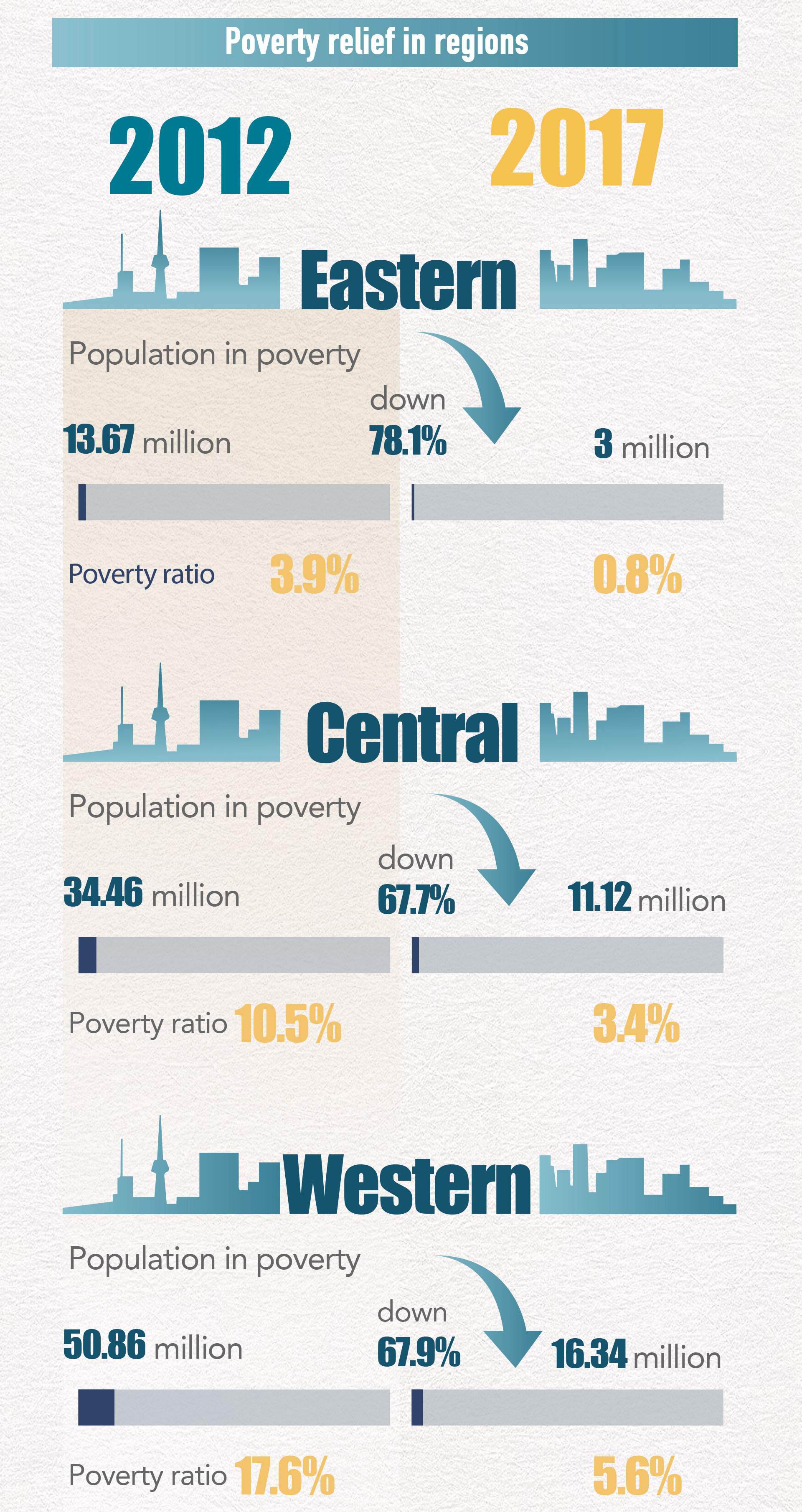 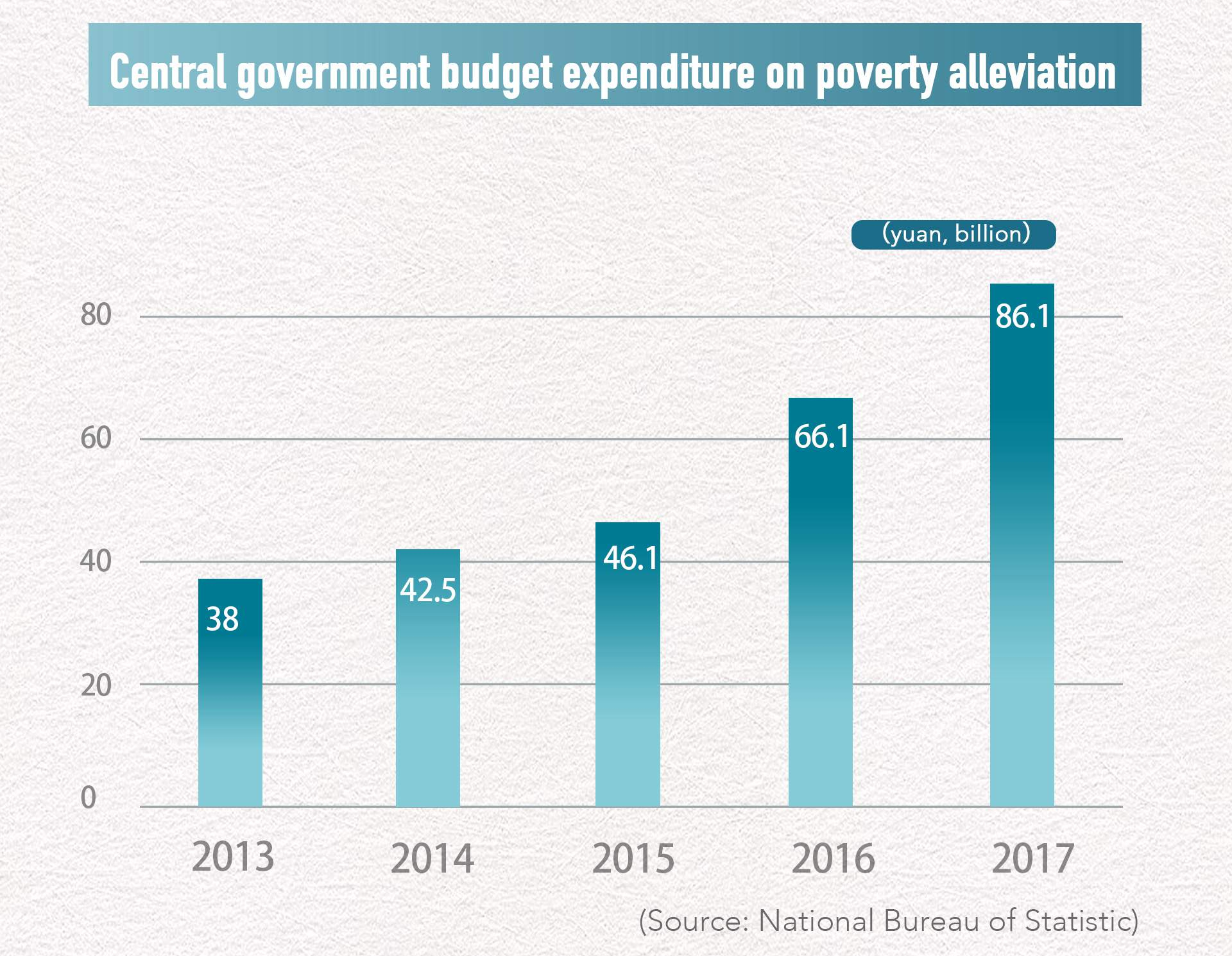 What policies are in place to reduce poverty in China?

President Xi Jinping first raised the concept of "targeted poverty relief" in 2013, which became the basic and critical strategy in China's fight against poverty.
Poverty relief is all about solving real problems, according to President Xi and he stressed that local governments in poverty-hit regions should suit their measures to different conditions and help locals find out ways to shake off poverty.
Except for setting clear reduction goals, "targeted poverty relief" also denotes that poverty should be lifted out through industrial development, relocation, eco-compensation education, and social security.

To carry out targeted poverty alleviation, about 800,000 officials have been sent to the frontline on poverty-relief missions, working on the very local level.
To motivate officials, from the county or provincial level, to go down to the poorest levels and work with individuals in severe conditions is by no means easy.
Read more:
China's targeted poverty alleviation: Coordination and evaluation play a key role

What are the challenges lying ahead?

To "continue to implement targeted poverty reduction and alleviation measures" and to "ensure that by 2020, all rural residents living below the current poverty line have been lifted out of poverty" were emphasized by President Xi Jinping in his report to the 19th National Congress of the Community Party of China (CPC).
It means 10 million people, which is close to the population of Portugal, must be lifted out of poverty every year to meet the goal.
Matteo Marchisio, International Fund for Agricultural Development (IFAD) manager for China and Mongolia in an interview with CGTN pointed out that the closer China gets to the "zero-poverty" target, the harder it becomes to reach it due to the high marginal costs. 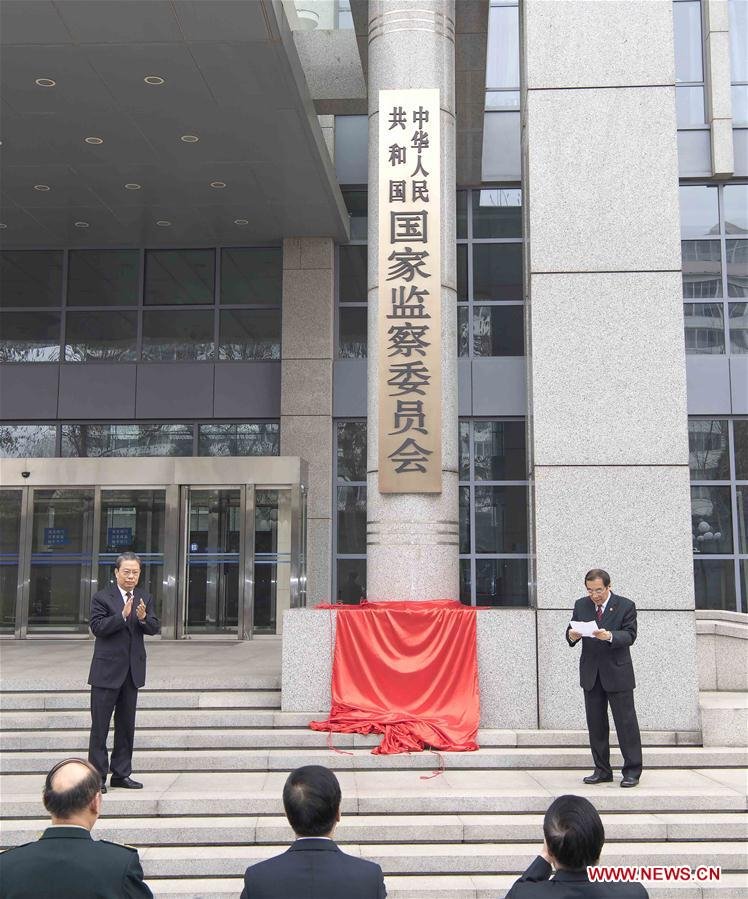 The reason is that the remaining poor are spread out in even further remote and marginal areas, with difficult physical access, limited natural or physical assets, and limited development opportunities. In addition, the remaining poor are the most vulnerable segment of society, like the eldest, chronically sick or handicapped people, he added.
Professor He Xuefeng, a sociologist at the Central China Science and Technology University also mentioned the corruption issues could be another key challenge.
The country's top anti-graft body, the Central Commission for Discipline Inspection (CCDI) of the Communist Party of China punished more than 11,000 cadres for corruption related to poverty alleviation in 2016 alone.
The CCDI has also announced that it would launch a campaign targeting corruption and malpractice in poverty alleviation projects from 2018 to 2020.