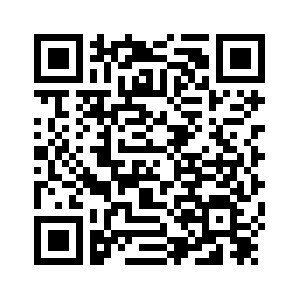 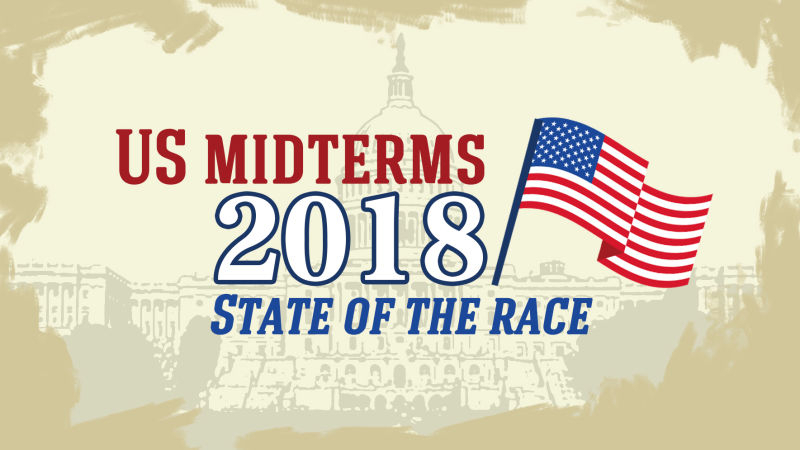 Polling trends suggest a good night for the Democrats with three days to go until pivotal US midterm elections, but the party is unlikely to have all things go its way.
Although indicators show it is likely to reclaim the House of Representatives and pick up several governor's mansions, the Republicans are favorites to retain the Senate.
Last week: Democrats out-fundraise Republicans
Democrats winning the House alone would mean a divided government in the US, fundamentally changing the course of the Trump presidency.
It would allow the Democrats to open probes into Trump and his administration, undercut the president's domestic agenda and probably lead to a greater focus on foreign affairs for his next two years in office.
What's happened in the past week?
The parties are making their closing arguments in the final stretch of campaigning ahead of Tuesday's elections, seeking to turn out a few more voters and change a few more minds.
President Donald Trump has sought to put immigration and border security at the top of the news cycle, after Republican momentum was interrupted by the Pittsburgh mass shooting and failed pipe bomb attacks – and the president's poorly received response to them. 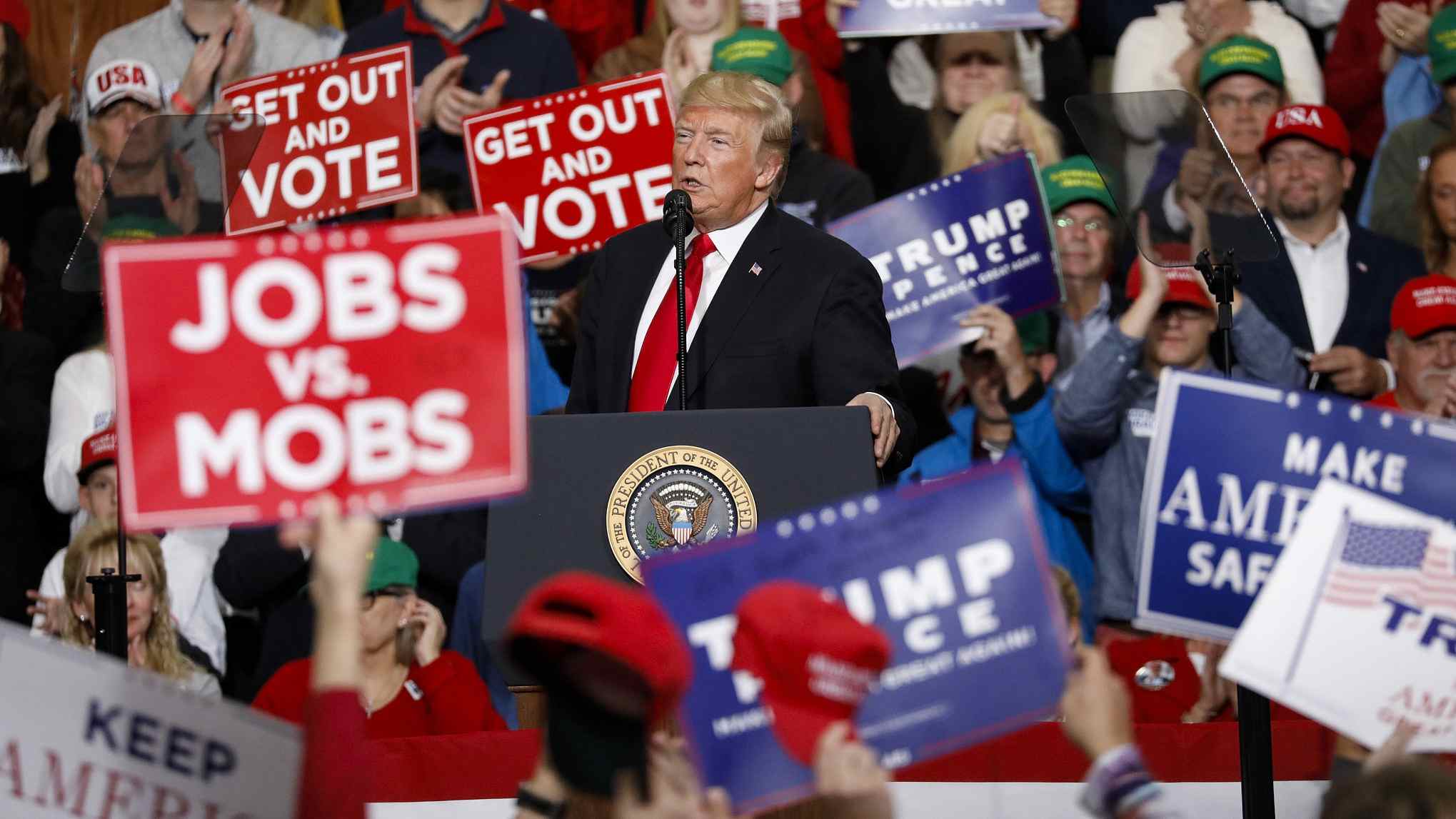 Trump's call for an end to birthright citizenship and decision to send thousands of troops to the Mexico border play well to his base as he seeks to boost Republican turnout – but run a risk of alienating independent and female voters.
A more upbeat message for Republicans is the state of the economy, and on Friday official figures showed that 250,000 jobs were added in October and wages grew at the fastest rate in almost a decade. 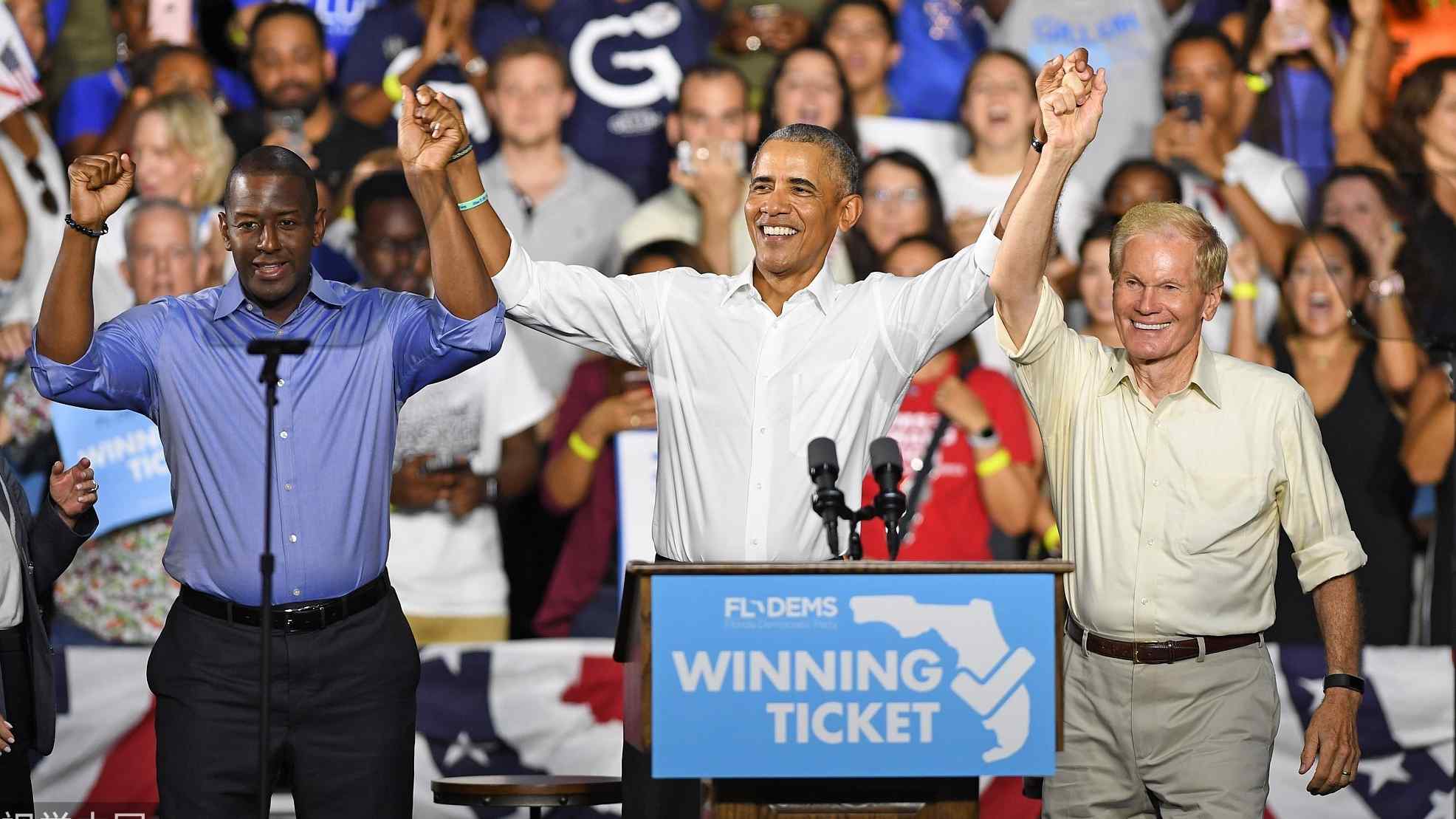 The Democrats continued to hammer home on their core issue – healthcare – with former president Barack Obama hitting the campaign trail alongside an array of 2020 presidential hopefuls.

Generic ballot
The Democrats have extended their lead over the Republicans in the generic congressional ballot over the past week, according to the indicator averaged by FiveThirtyEight.
The Democratic lead of 8.3 percentage points is up 0.1 points, with the party matching its highest average rating in eighteen months up 0.4 points at 50.5 percent. The Republicans have jumped 0.3 points to 42.2 percent as more voters pick a side. 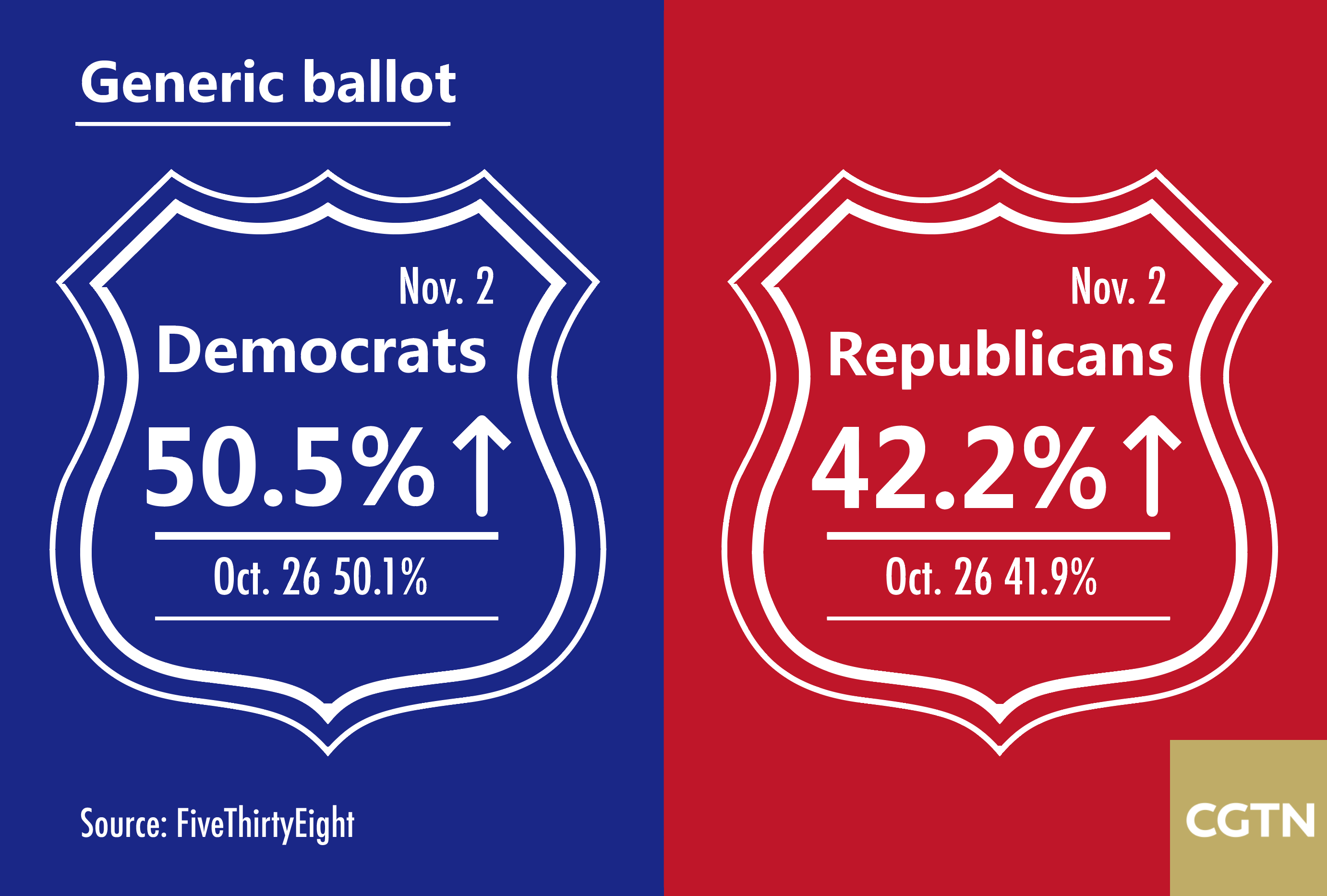 CNBC analysts say a 12-point gap would probably be required for a "blue wave" – Democratic victories in both houses of Congress – while a six-to seven-point margin would likely be needed for the Democrats to take just the House.
Indicator favors: DEMOCRATS
Presidential approval
Trump has been front and center of the national Republican campaign, relishing big rallies.
"I'm not on the ticket, but I am on the ticket," Trump said at a recent event in Mississippi. "Because this is also a referendum about me and the disgusting gridlock that they'll (the Democrats) put this country through." 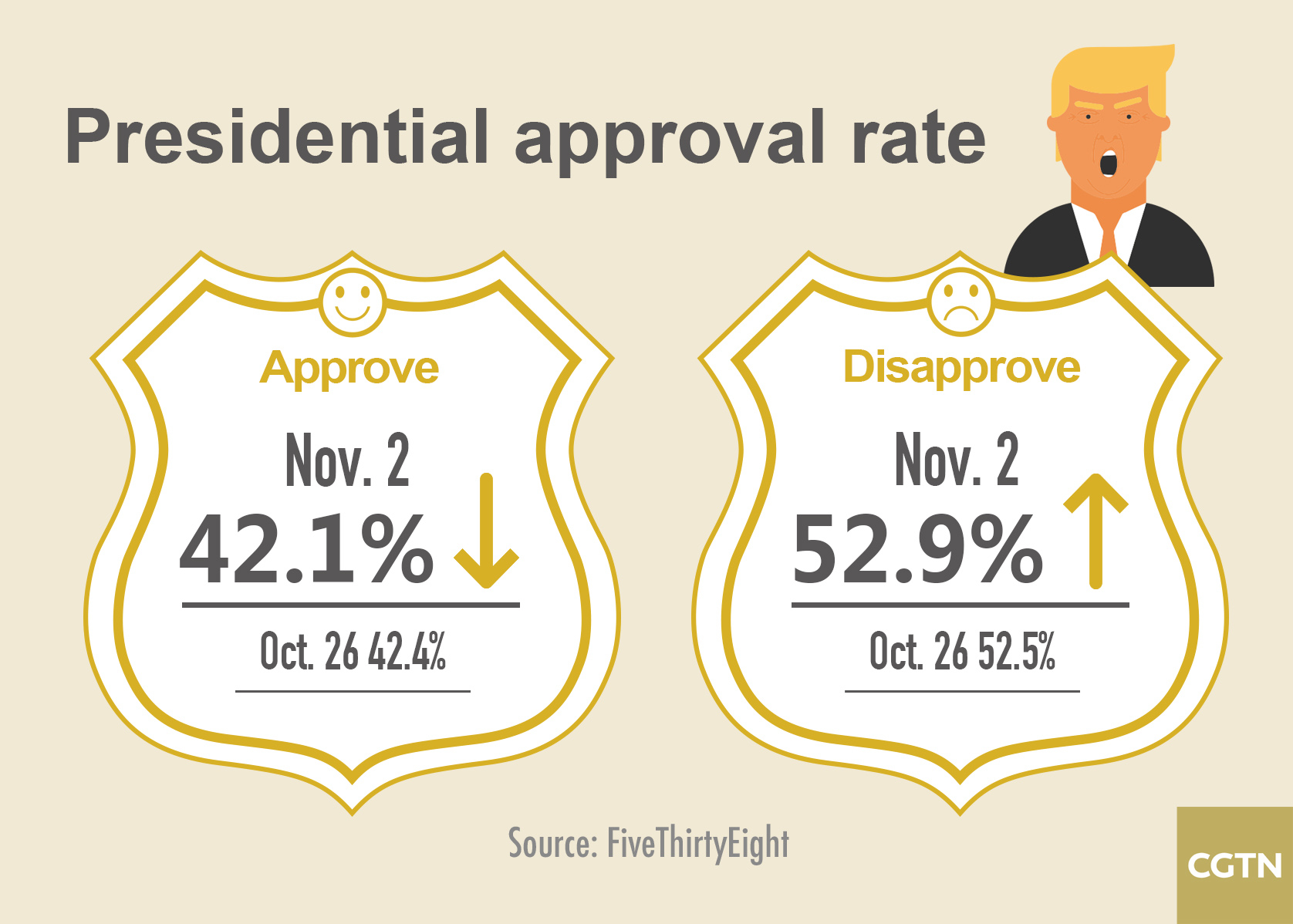 However, the president's approval ratings dropped to 42.1 percent (from 42.4 percent) over the past week, according to a FiveThirtyEight calculation of multiple polls, and the president's disapproval increased to 52.9 percent (from 52.4 percent). The 10.8 percentage point approval gap is up 0.7 points since last week.
A president's party nearly always suffers a net loss in midterm elections – Gallup's polling history shows that presidents with approval ratings of below 50 percent have seen their party lose an average of 37 House seats in midterms.

Voter turnout
The best gauge of turnout three days out from the election is early voting – and in some states the early vote count is already approaching the total number of ballots cast in 2014.
This indicates that turnout will considerably outpace the 37 percent of four years ago and remains on course for a near 50-year high.
In Texas, Democrat Beto O'Rourke is challenging incumbent Republican Ted Cruz for a Senate seat in one of Tuesday's highest profile elections. More than 4.3 million votes have already been cast, state officials revealed on Thursday, just 400,000 short of the 4.7 million total turnout in 2014. 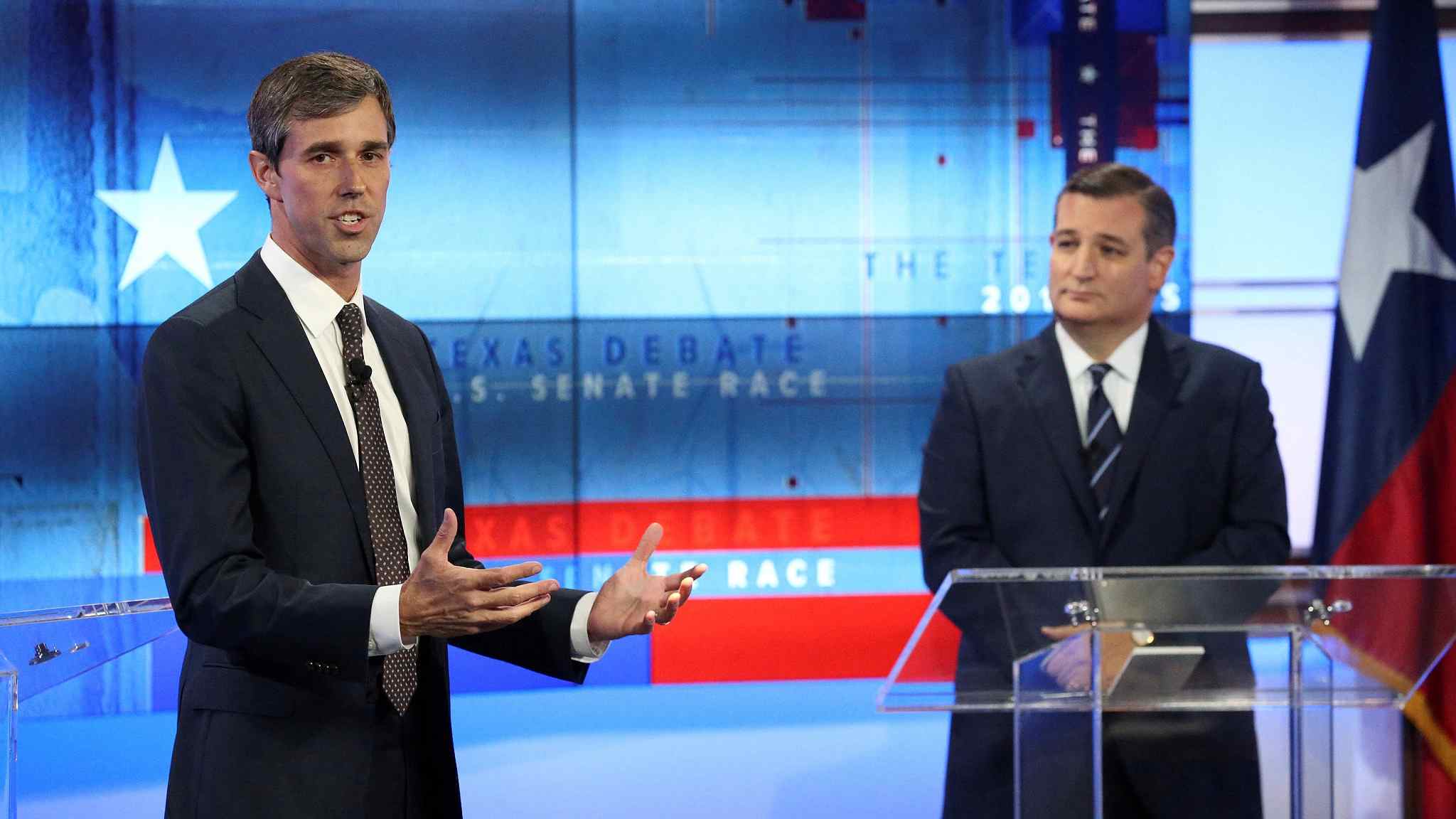 Surveys suggest that there has been a significant rise in early voting among those between 18-29 compared to 2014. Young Democrats are more likely to vote than young Republicans, according to Ipsos polling, and younger voters tend to favor the Democrats.
Although a younger, more diverse electorate would likely boost Democrats, it's impossible to know for sure who the early voters are backing – and supporters of both parties are fired up.
"What we're seeing is very high levels of engagement on both sides in the competitive elections for governor and Senate," Michael McDonald, a political science professor at the University of Florida, told the Washington Post.

House of Representatives
All 435 seats are up for election in the House, where the Republicans currently hold a 235-193 majority (seven seats are vacant). To take control of the House, the Democrats need a net gain of 23 seats.
FiveThirtyEight's latest forecast gives the Democrats an 84.7 percent (up from 84.6 percent a week ago) chance of winning control, and the Republicans a 15.3 percent (down from 15.4 percent) chance of retaining a majority. 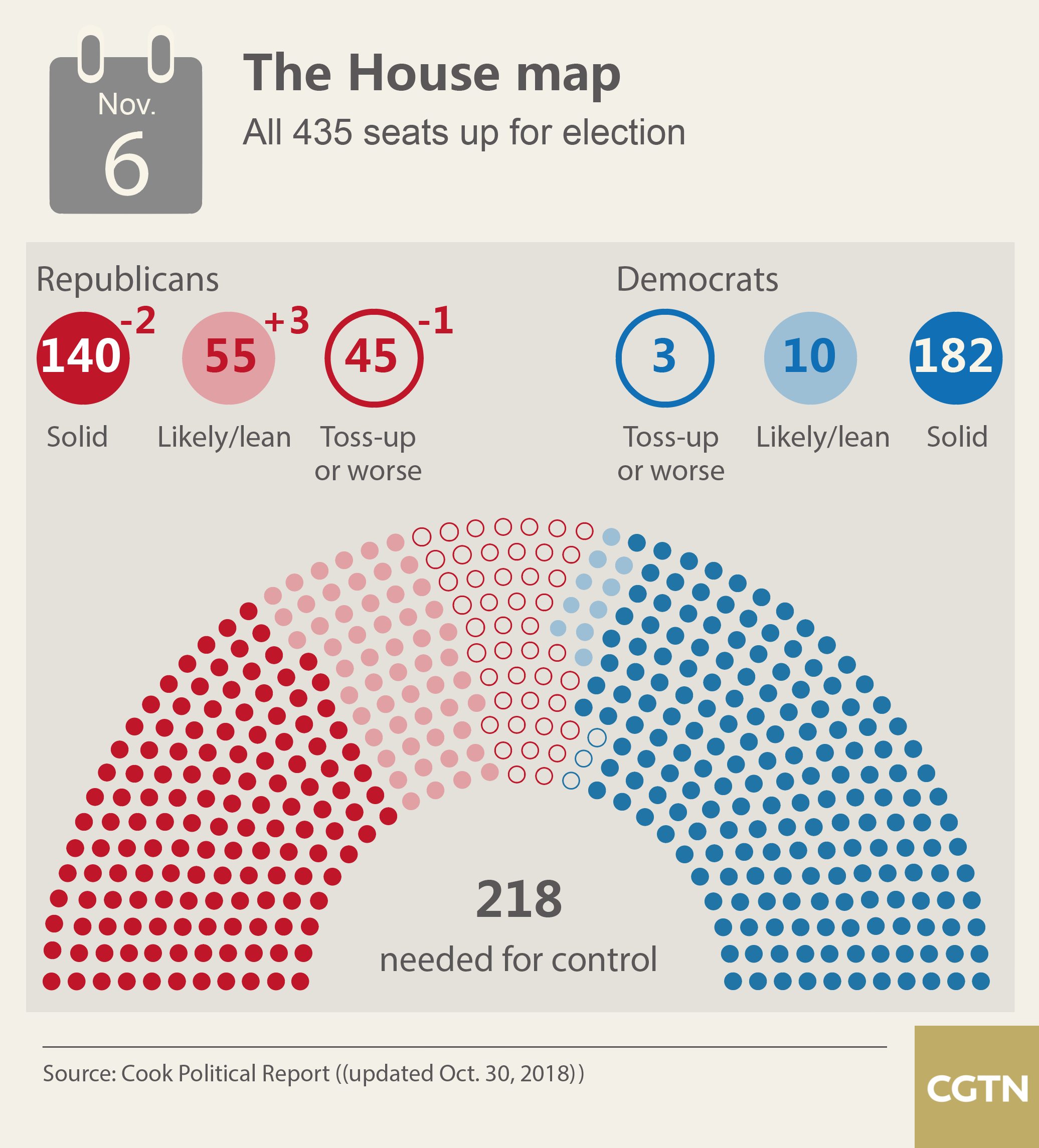 The latest update from The Cook Political Report indicates minor shifts on the Republican side, with one seat moving from a toss-up to likely/lean and two previously solid seats becoming more competitive.
Forty-five Republican-held seats are now toss-ups or worse and a further 55 are competitive. Only three Democratic seats are toss-ups and 10 more are considered competitive.

Senate
Thirty-five seats are up for grabs in the Senate, where the Republicans hold a slim 51-49 advantage. The Democrats only need two seats to take control of the chamber but the Republicans are in the box seat – they are defending nine seats and attacking 26. 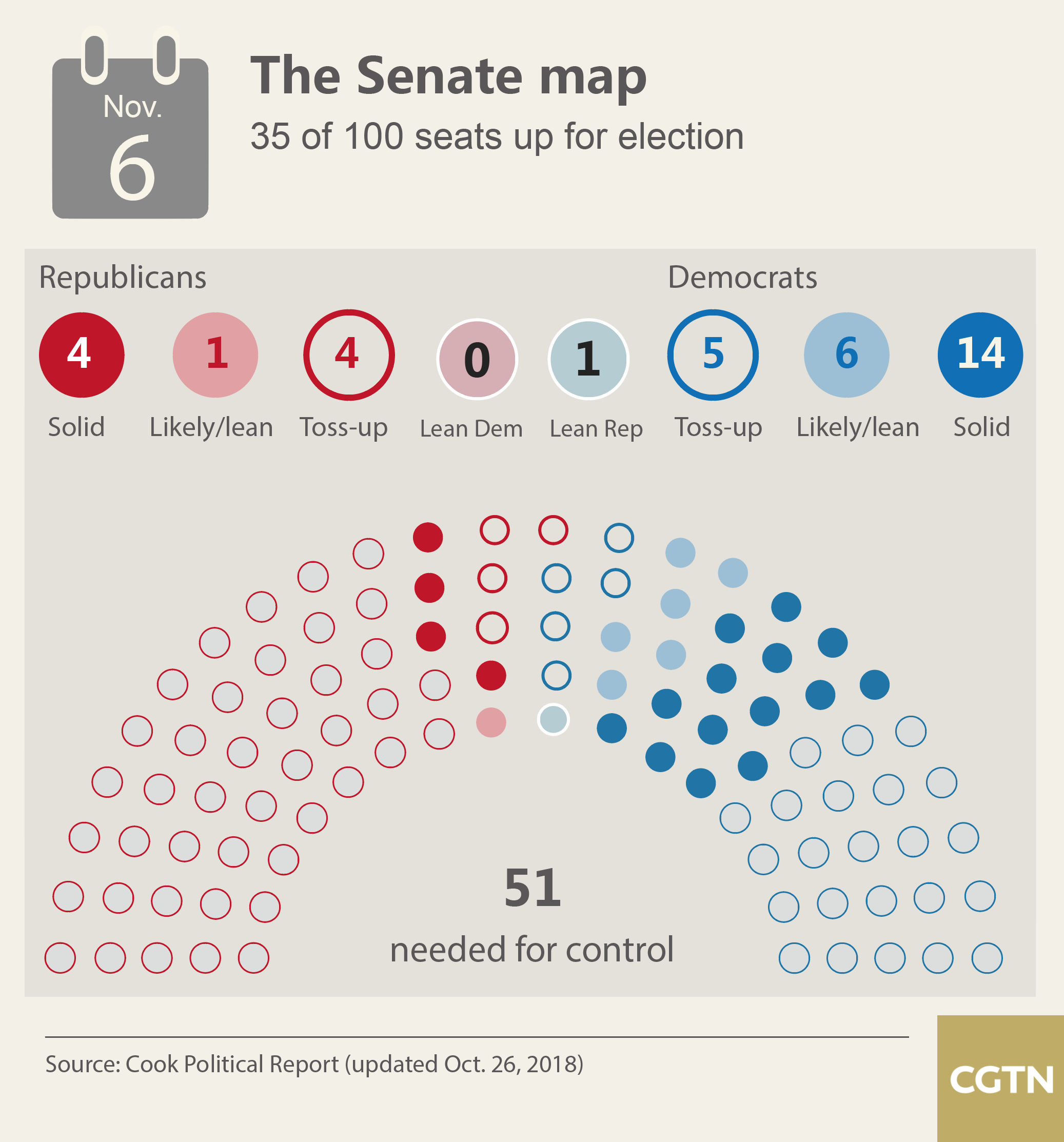 FiveThirtyEight's latest forecast gives the Democrats a 15.3 percent (down from 17.4 percent a week ago) chance of winning control, and the Republicans an 84.7 percent (up from 82.6 percent) chance of retaining a majority.
The latest update from The Cook Political Report shows four of the nine Republican-held seats are toss-ups, and five of the 26 Democrat-held seats fall into the same category. The North Dakota seat held by Democrat Heidi Heitkamp is now a Republican lean.

Gubernatorial
Thirty-six state governor's mansions are being contested in 2018, 26 of which are currently held by Republicans, nine by Democrats and one by an independent.
Just as the Republicans have an advantage in this year's Senate elections because they are attacking far more seats than they are defending, the Democrats are on course to pull several states from their opponents' control. 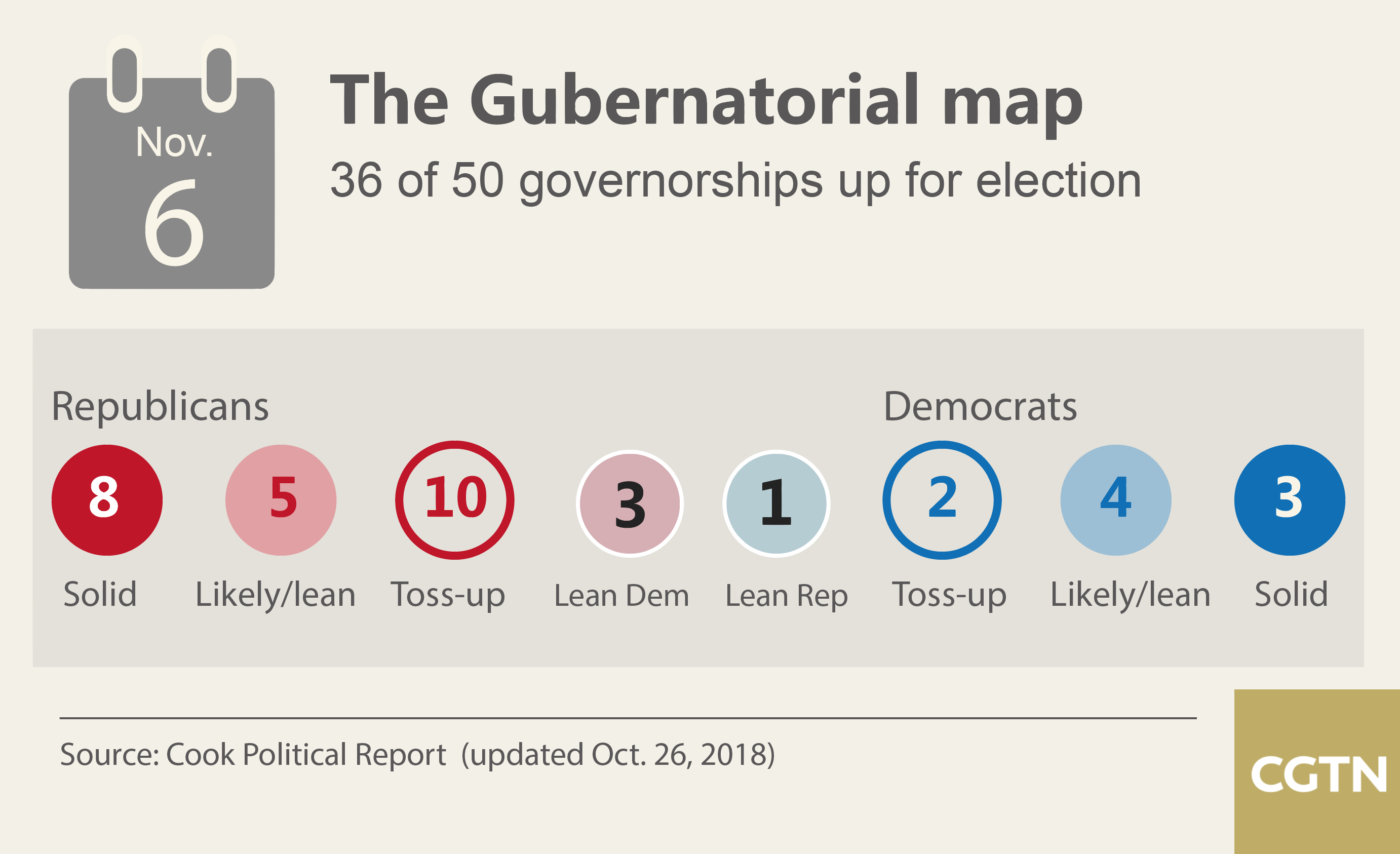 FiveThirtyEight forecasts that post-election Democrats will govern 62.6 percent of the US population to the Republicans' 37.4 percent at a state level.
Republican-held governor's mansions in Illinois, Minnesota and New Mexico are leaning towards the Democrats according to the Cook Political Report and a further 10 are toss-ups. Only eight of the 26 Republican-run states contested are seen as solid.
Three of nine mansions currently held by the Democrats are toss-ups or worse, and a further three are safe.