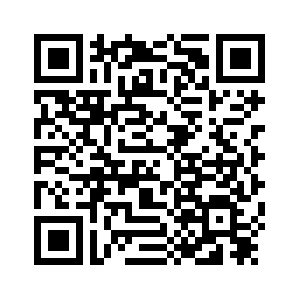 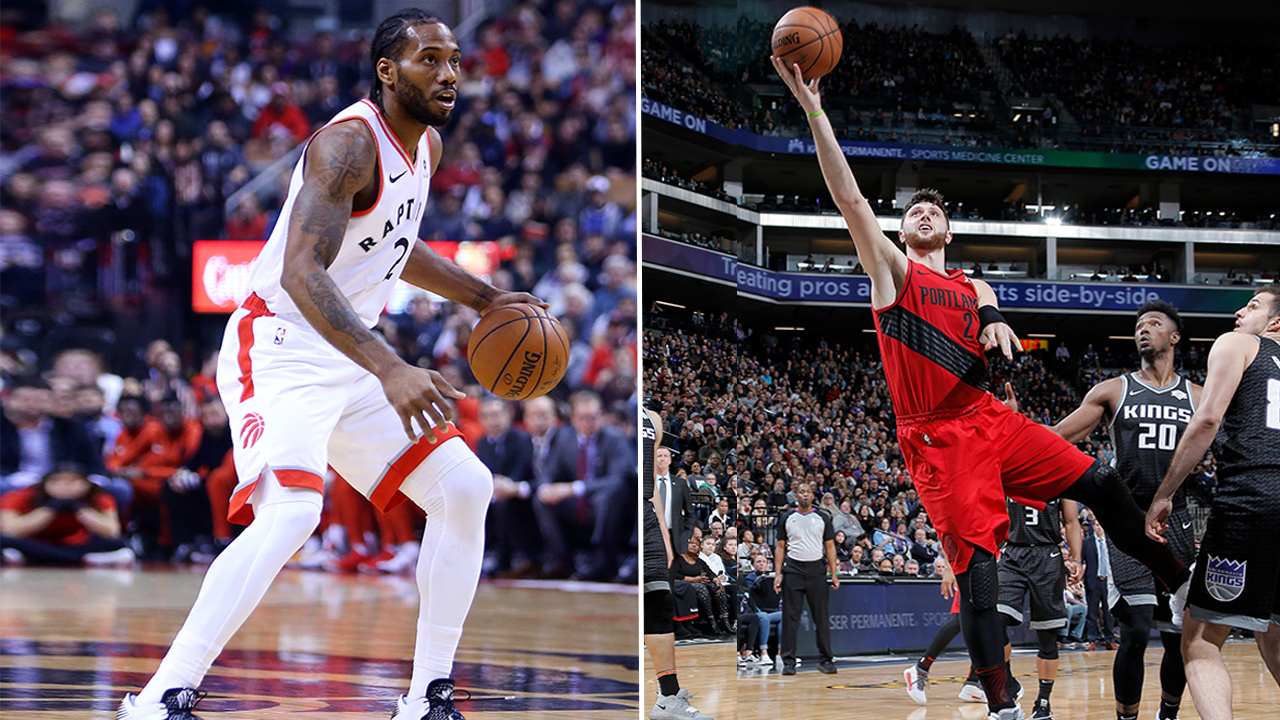 On Tuesday, the first day of 2019, Kawhi Leonard helped the Toronto Raptors defeat the Utah Jazz 122-116 at home by claiming a career-high 45 points. Meanwhile, Jusuf Nurkic of the Portland Trail Blazers dropped a historic 24 points, 23 rebounds, seven assists, five steals and five blocks to help his team beat the Sacramento Kings 113-108 in overtime.

Kawhi Leonard proves himself as a leader 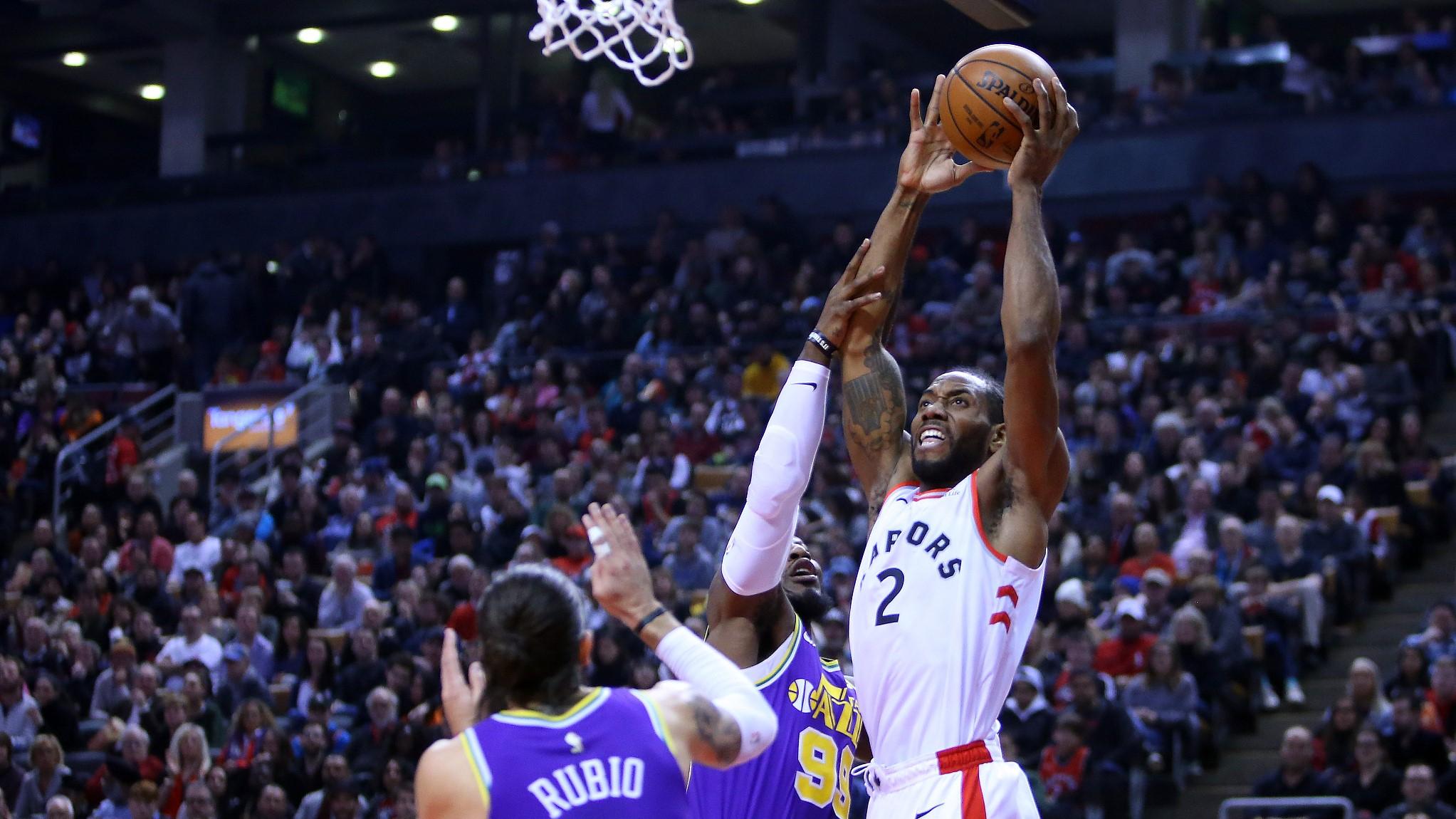 Having made 16 of his 22 shots and 13 of his 17 free throws, Leonard could not have been more efficient in his offense. Besides him, Toronto's Pascal Siakam also refreshed his career-record scoring with 28 points and 10 rebounds. Norman Powell from the bench contributed 14 points to the team's victory.
Utah had five players score double digits and Jae Crowder from the bench put down the highest 30 points. Derrick Favors took the highest 21 points of all the players in the starting lineup. Donovan Mitchell and Ricky Rubio scored respectively 19 and 14 points but together made only two three-pointers out of 12 attempts. 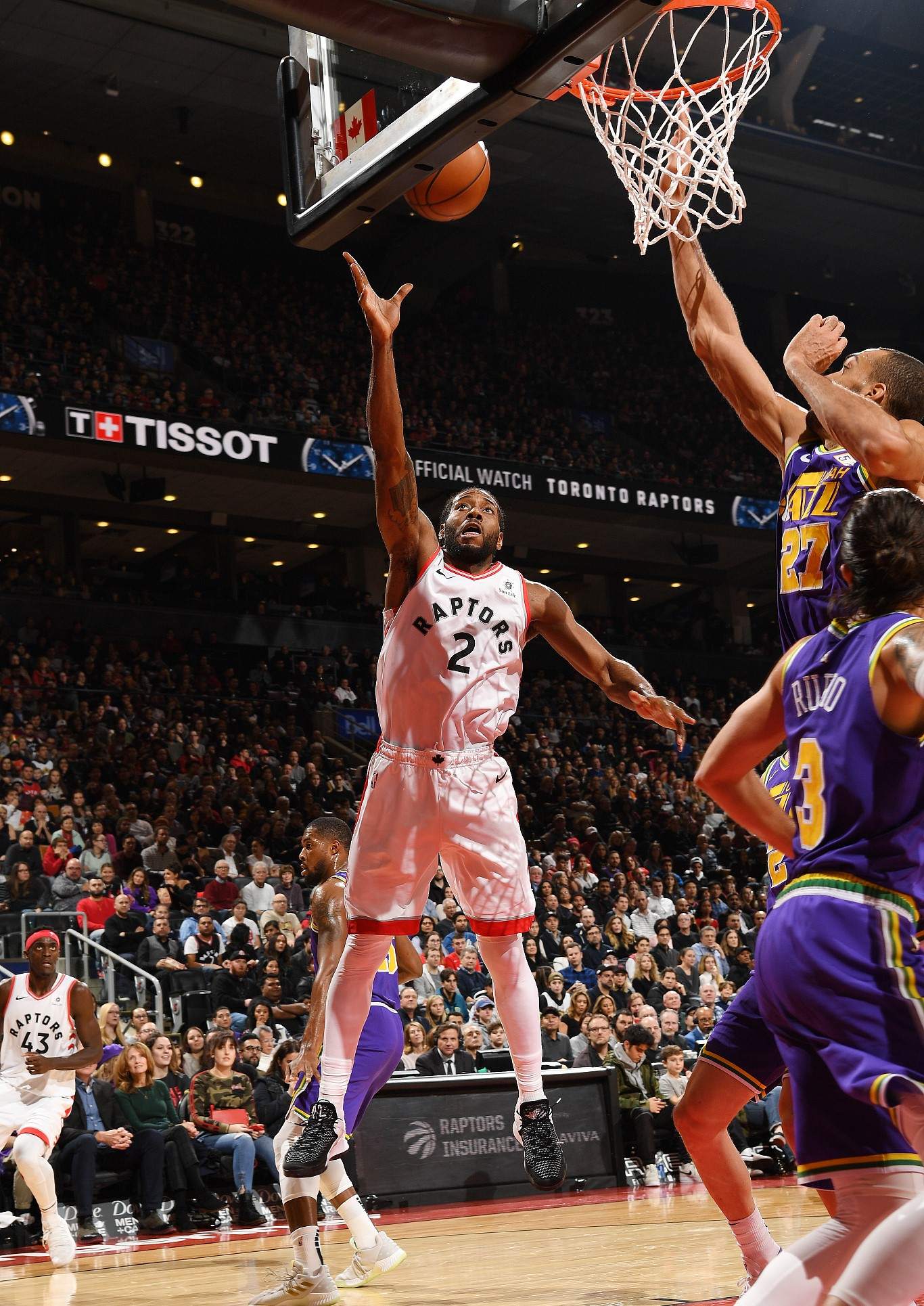 Leaonard #2 makes a floater against defense by the Utah Jazz. /VCG Photo

Leaonard #2 makes a floater against defense by the Utah Jazz. /VCG Photo

As Kyle Lowry and Jonas Valanciunas continued to miss Tuesday's game due to injuries, Leonard had to carry more of Raptors' offense. Instead of following today's 3-pt-shooting trend, Leonard maintained his classic middle-range post-up attack and was still unstoppable no matter who was sent to defend him by the Jazz. His 19 points in the third quarter helped Toronto stand up to the counter-strike from Utah.
One of the main reasons that the Jazz lost the game was their disappointing shooting performance. With Gobert excluded because he does not shoot out of the paint, four of Utah's first-line players in total made two shots from the 3-pt line but tried 19 times. Every time they came close to tying the score, missed three-pointers ruined their efforts. The team's second-year offense core Mitchell seemed to hit "rookie wall." His 40-percent field goal rate and 29 percent of 3-pt rate both dropped compared with last season, making his penetration even more difficult. 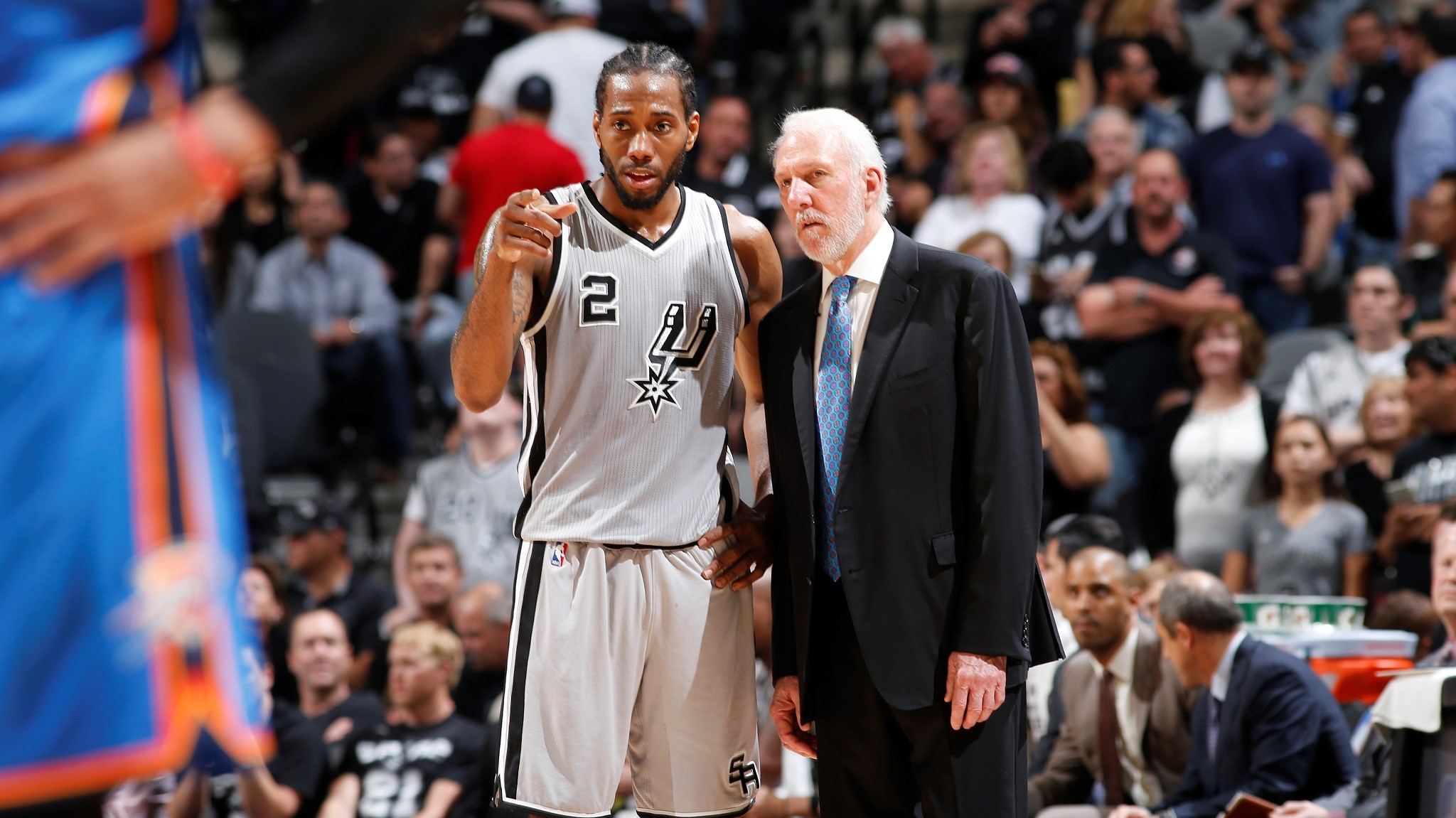 Leonard (L) and Gregg Popovich (R), head coach of the San Antonio Spurs, when they were working together /VCG Photo

Leonard (L) and Gregg Popovich (R), head coach of the San Antonio Spurs, when they were working together /VCG Photo

The Raptors will challenge the San Antonio Spurs on Thursday at the AT&T Center. In November 2018, the Spurs' head coach Gregg Popovich said that Leonard was not a leader with his team. In response, Leonard called Pop's remarks "funny" and said that he "leads by example." Now that Leonard is returning to San Antonio for the first time since his trade drama in 2018 summer, the game on Thursday will be something to watch. 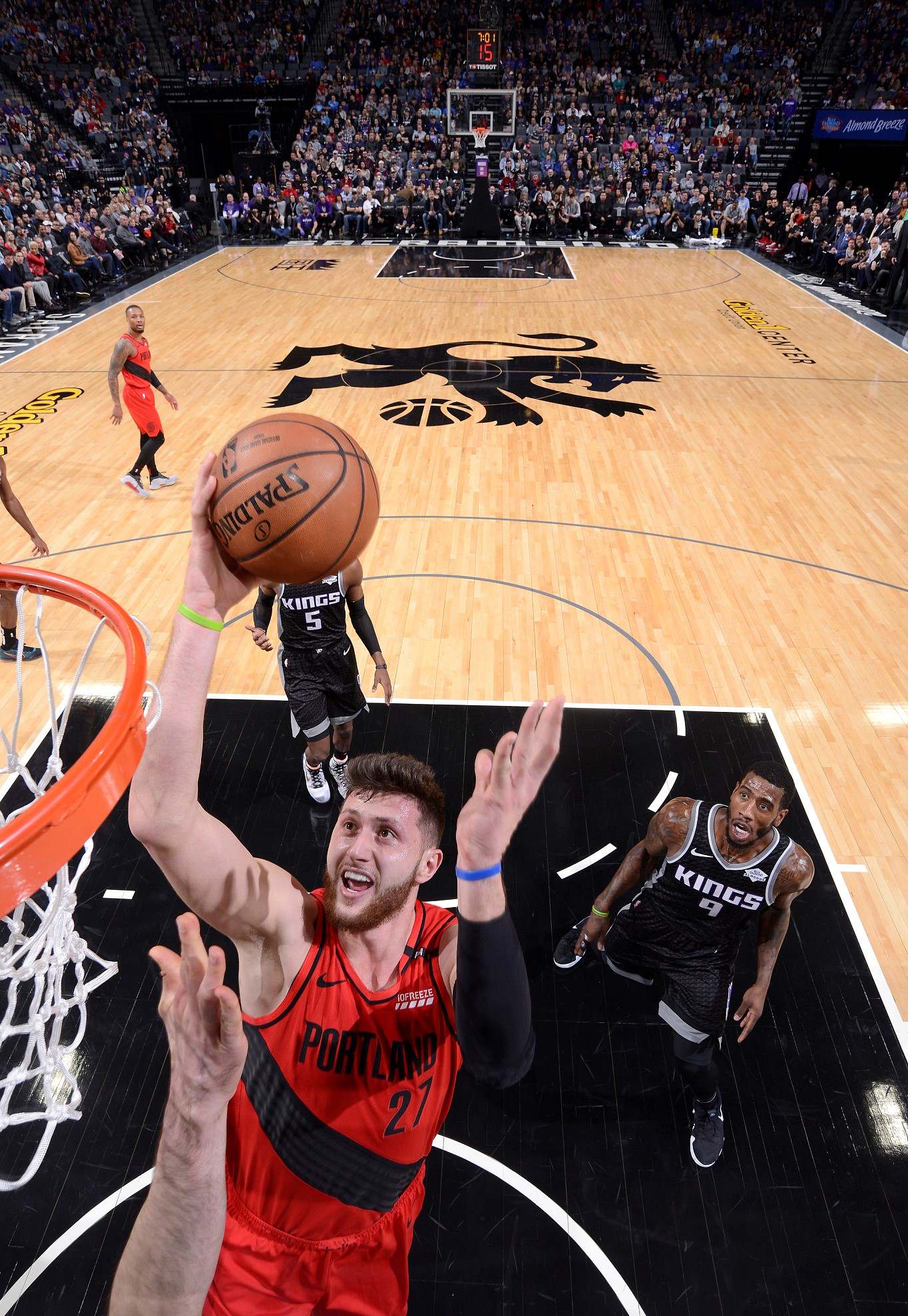 Jusuf Nurkic #27 of the Portland Trail Blazers attacks the basket in the game. /VCG Photo

Jusuf Nurkic #27 of the Portland Trail Blazers attacks the basket in the game. /VCG Photo

Nurkic filled his data sheet with no blank column. None of the 24 points, 23 rebounds, seven assists, five steals and five blocks is rare by itself, but one player taking all of them in one game is definitely crazy in the NBA. The only two players who ever got close to it were Hakeem Olajuwon with his 34 points, 22 rebounds, five assists, four steals, seven blocks and Kareem Abdul-Jabbar with his 31 points, 21 rebounds, five assists, five steals and four blocks. Damian Lillard also dropped 25 points to Portland's second straight win.
Sacramento's Buddy Hield scored the court's highest 27 points. Nemanja Bjelica took the team's only double-double of 14 points and 16 rebounds. Bogdan Bogdanovic dropped the highest 19 points from the bench. 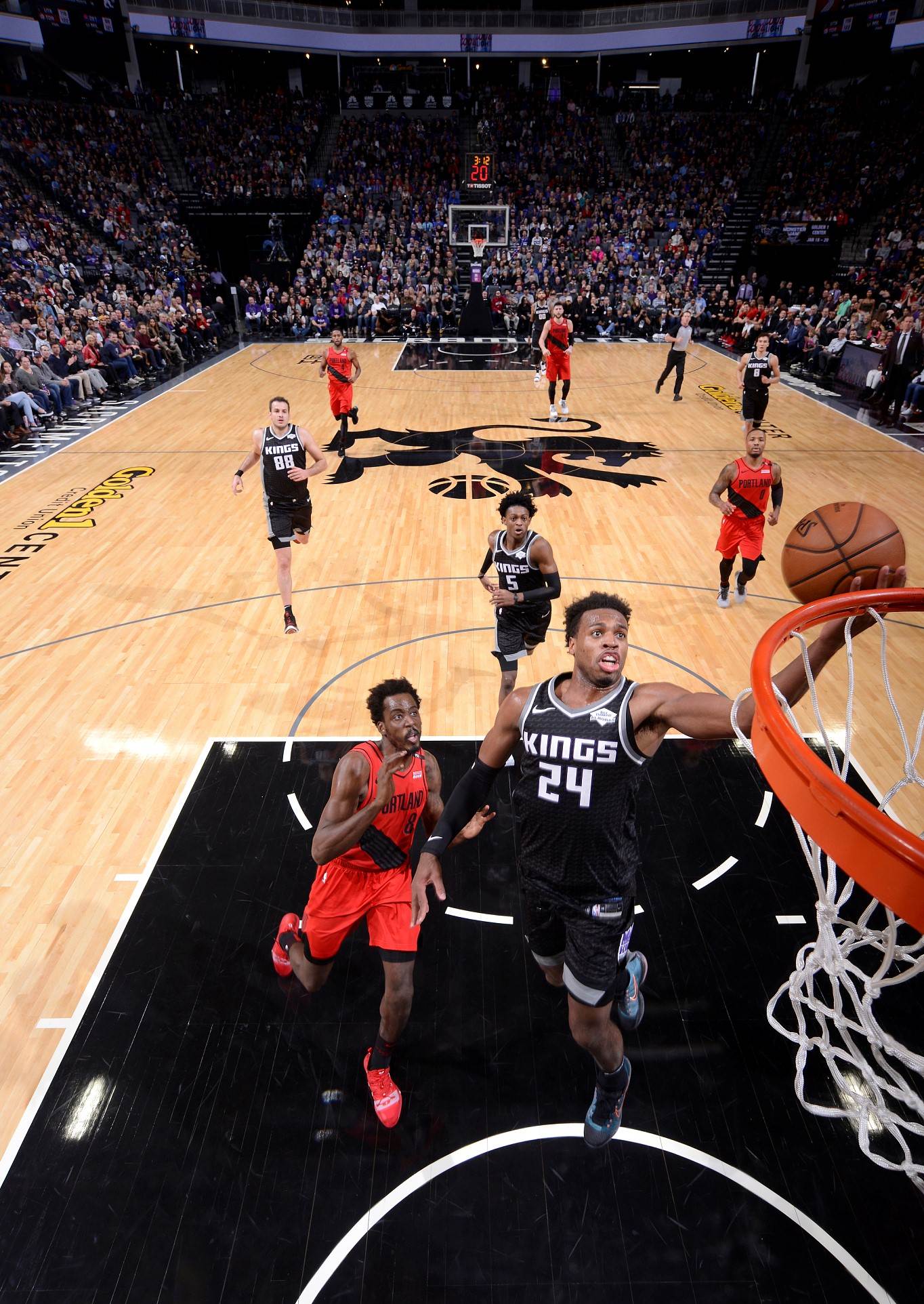 Buddy Hield #24 of the Sacramento Kings makes a lay-up in the game. /VCG Photo

Buddy Hield #24 of the Sacramento Kings makes a lay-up in the game. /VCG Photo

The Kings this season were a strange team as they could be a totally different group as the game entered the fourth quarter and that was the case for Tuesday's game. They trailed by six points (77-83) after the first three quarters while Trail Blazers' back-court combination Lillard and C.J. McCollum remained frozen with their hands.
When most people expected Lillard to launch a scoring run in the fourth quarter to seal the win for Portland, Sacramento acted first. Bogdanovic, who missed all his previous eight shots, made five shots in a row to help his team lead by seven points (94-87) in less than five minutes. As a matter of fact, the Kings almost won the game by leading until the last 15 seconds. 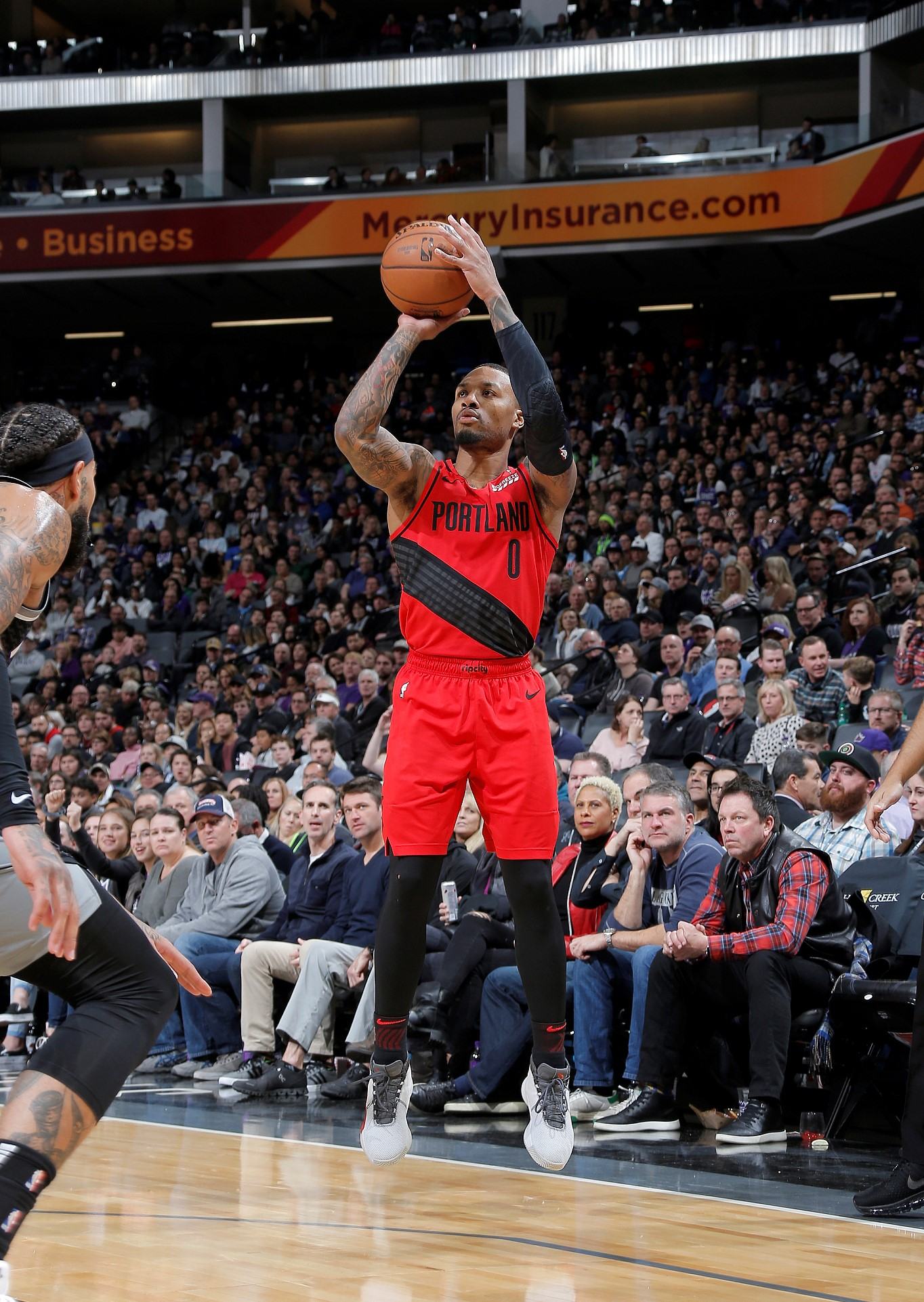 The Trail Blazers owed their victory to Lillard and Nurkic. The three-time All-Star guard bagged the team's all seven points, including a lay-up to tie the score (103-103) and their first five points in overtime to help Portland gain the lead with a 9-0 run. Moreover, Nurkic's two key blocks in the last minute of the fourth quarter also contributed a lot to the team's victory.
Other games on Tuesday included: (away teams come first)
Detroit Pistons 98-121 Milwaukee Bucks
New York Knicks 108-115 Denver Nuggets
Philadelphia 76ers 119-113 Los Angeles Clippers