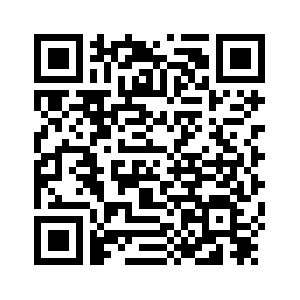 Editor’s Note: Wang Li is a professor at Jilin University. The article reflects the author’s opinion, and not necessarily the views of CGTN.
Yesterday, the world's attention was rightly focused on the garden state—Singapore where the Summit between Trump and Kim was held. It was a classic case study of textbook diplomacy as the historic meeting aimed to enhance the peace and stability in the region and beyond.
Internationally, people might be able to see a new country appear; regionally, a peace mechanism might be created by joint efforts of the powers involved; bilaterally, the United States and its allies (the Republic of Korea (ROK) and Japan) would improve their relationship with the Democratic People's Republic of Korea (DPRK). If all goes well, a formal peace agreement would be concluded to end the 65-year hostilities on the Korean Peninsula, followed by stable peace and prosperity in East Asia.
As the most important neighbor of the Korean Peninsula, China has consistently provided all necessary help to promote its long-term stability and denuclearization. On June 12, China once again reiterated its hope that the meeting between Trump and Kim will result in substantive steps toward denuclearization and the establishment of peace on the Korean Peninsula. 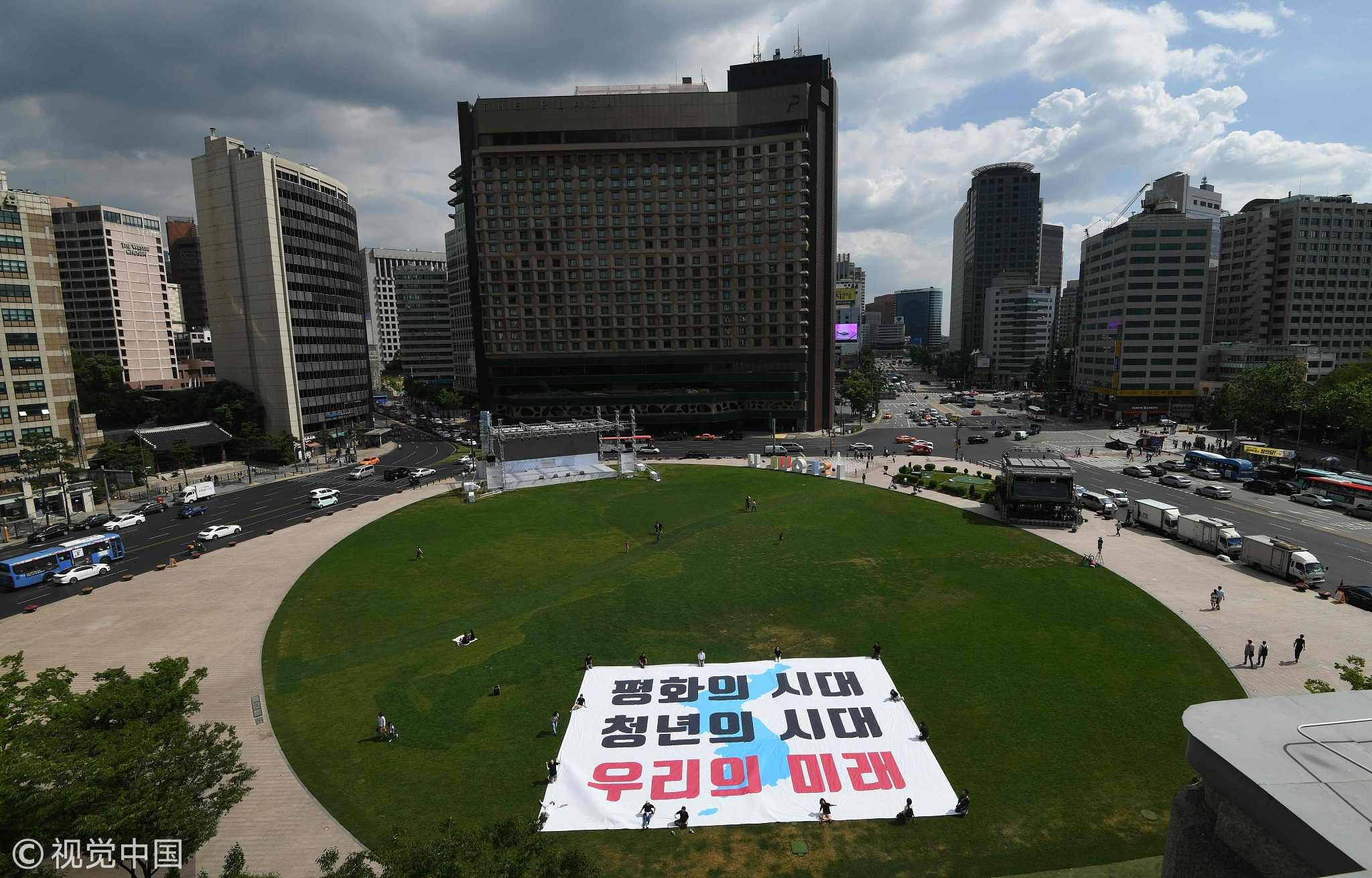 ROK activists display a big "reunification flag" inscribed with a slogan reading "The era of peace, The era of youth, Our future" during a rally to welcome the Trump-Kim meeting, at Seoul plaza in Seoul on June 12, 2018. /VCG Photo

ROK activists display a big "reunification flag" inscribed with a slogan reading "The era of peace, The era of youth, Our future" during a rally to welcome the Trump-Kim meeting, at Seoul plaza in Seoul on June 12, 2018. /VCG Photo

It is still too early to predict the future dimensions of the Trump-Kim Summit. Yet, it is quite clear that the meeting was successful in terms of classical diplomacy. First, prior to the summit on June 12, diplomats from both the DPRK and the US had dedicated their last-minute efforts to the summit in a bid to narrow their differences and to pave a way for the historic meeting between the two leaders, Donald Trump and Kim Jong Un. This is the essence of diplomacy.
As French statesman Richelieu said in the 17th century, “diplomacy should be a continuous process which can be only built on uprightness and integrity of the proceeding.”
Second, from the beginning of the meeting, both leaders revealed their sincerity, courtesy and flexibility. It is not easy because the two countries have been hostile to each other for nearly seven decades. Yet, the summit started with a one-on-one meeting, followed by an expanded session and a working lunch.
This sort of relaxing atmosphere is productive to mutual trust and personal ties of the key players and eventually led to what Trump later told the press conference, that the summit went better than anybody had predicted, adding that “US relations with the DPRK will be very different and the situation on the Korean Peninsula will be very different.” 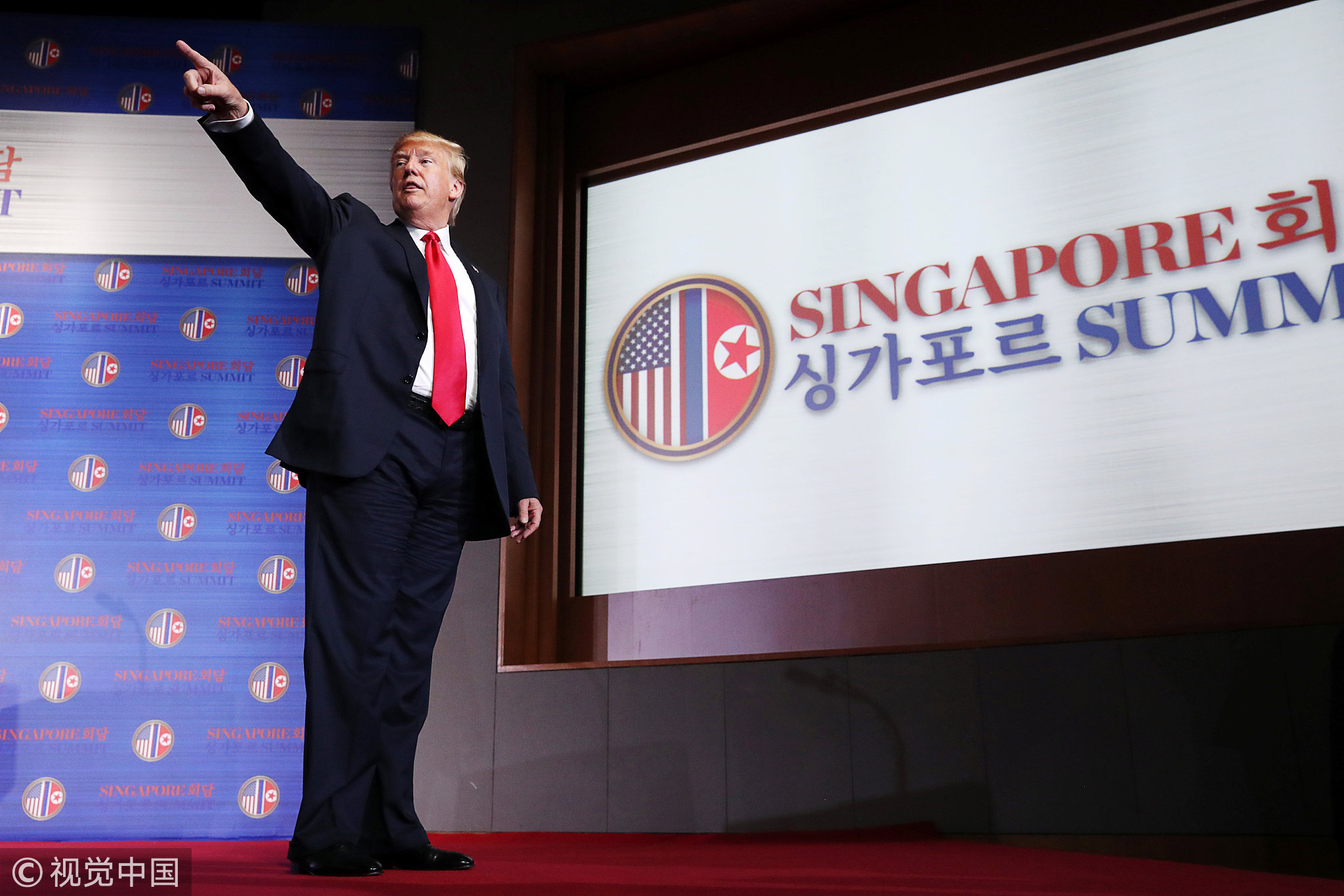 US President Donald Trump reacts after a news conference after his meeting with DPRK leader Kim Jong Un at the Capella Hotel on Sentosa island in Singapore June 12, 2018. /VCG Photo

US President Donald Trump reacts after a news conference after his meeting with DPRK leader Kim Jong Un at the Capella Hotel on Sentosa island in Singapore June 12, 2018. /VCG Photo

Like French diplomatist Francois de Callieres wrote in 1716 that “the art of negotiating with [head of state] is of so great importance that the fate of the great states depends on the good or bad conduct and on the capacity of the key negotiators.”
Third, Trump and his core advisors adopted more restraint and a cooperative attitude. Even before the summit, US Secretary of State Mike Pompeo still insisted that “the ultimate objective the US seeks from the DPRK is the complete, verifiable and irreversible denuclearization of the Korean Peninsula and is the only outcome that the United States will accept."
Yet, at the press following the summit, Trump clearly defended that scientifically and technically speaking, the denuclearization should be a process. Meanwhile, he mentioned the DPRK's desire for security and is prepared to ensure that. It testifies that Trump possibly modified his earlier demand for a swift denuclearization of the DPRK, although he declined giving any details, such as a US troop reduction in the ROK or withdrawal of the US nuclear umbrella for the ROK and Japan. 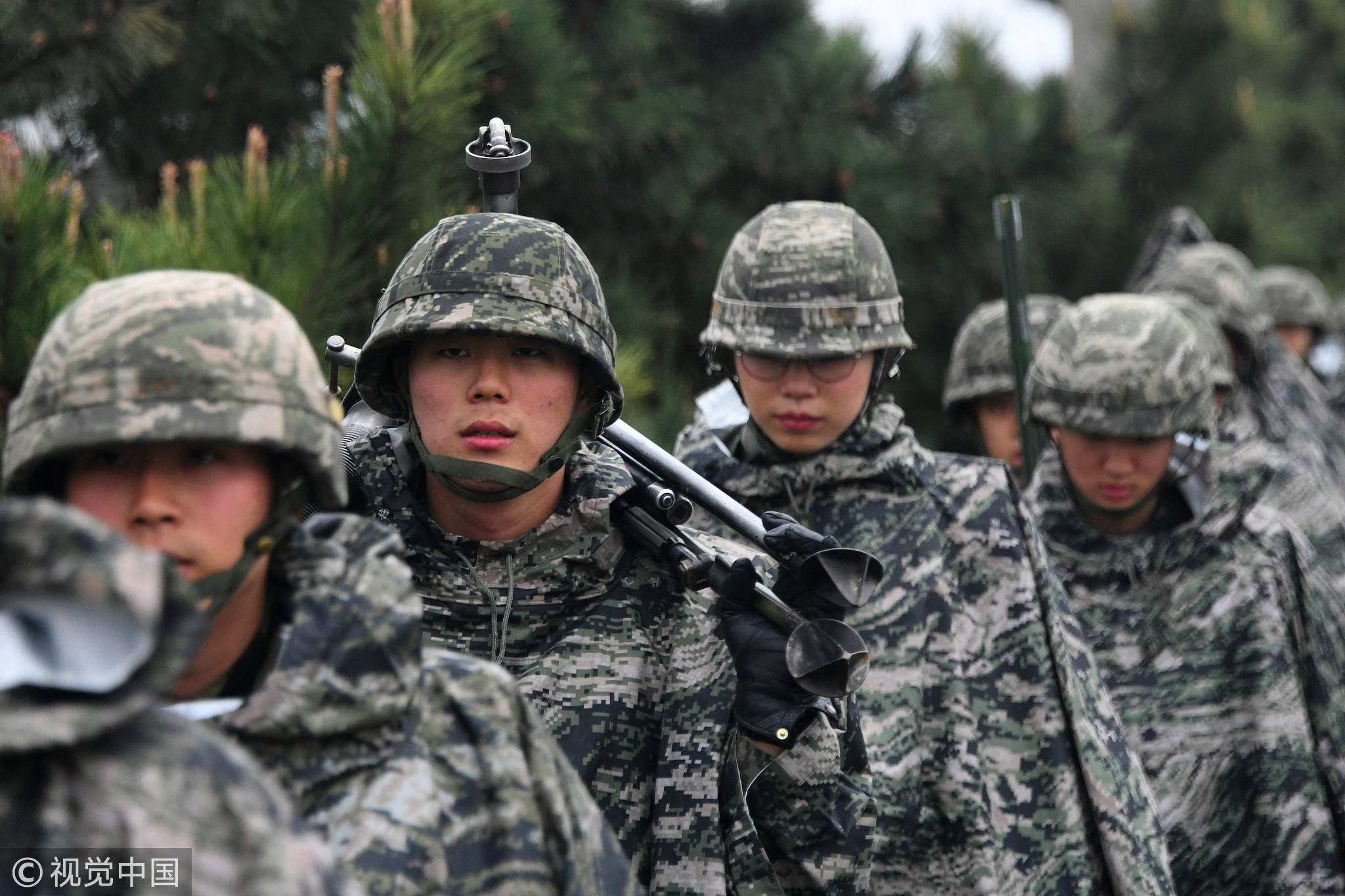 South Korean Marines march on the sidewalk after arriving at a port during a joint military exercise in Pohang on April 5, 2018. /VCG Photo

South Korean Marines march on the sidewalk after arriving at a port during a joint military exercise in Pohang on April 5, 2018. /VCG Photo

In summary, although we have the reasons to be cautiously optimistic about the impact of the Trump-Kim summit, it is certain that the US and the DPRK have agreed to resolve the outstanding issues by dialogue rather than by coercion. True, due to the long-standing confrontation, the two sides still have differences in many aspects. So it is vital for both Washington and Pyongyang to keep the peaceful momentum of the June 12 Summit to move forward toward a peace treaty, normalization, and denuclearization. To that end, China welcomes and supports the meeting and will continue to play a constructive role in this regard.