America's human rights: Where there is smoke, there is fire
Bobby Naderi 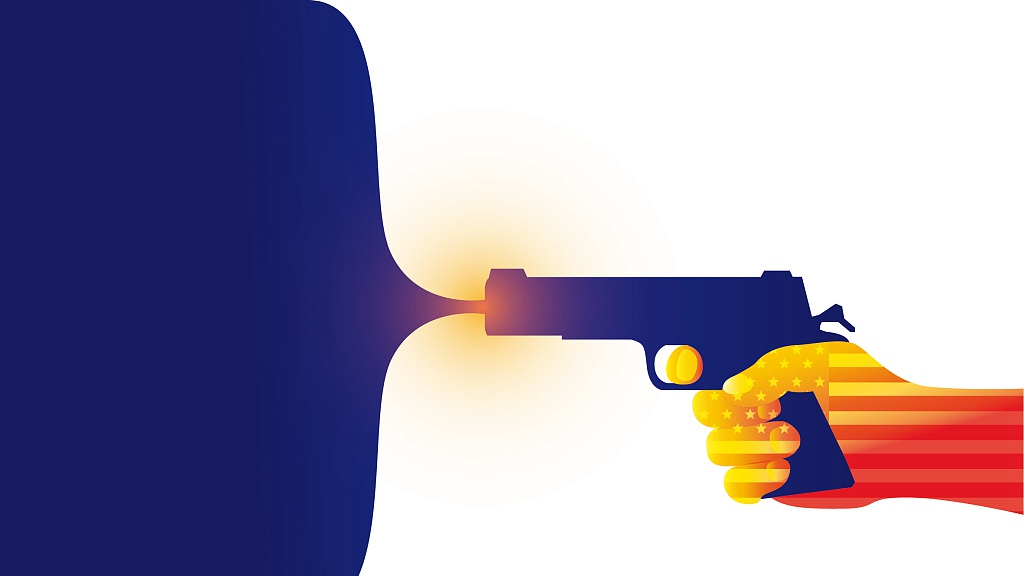 Editor's note: Bobby Naderi is a journalist, a current affairs commentator, a documentary filmmaker, and a member of the Writers Guild of Great Britain. The article reflects the author's opinions, and not necessarily the views of CGTN.
In all fairness, a country that has pulled out of the United Nations Human Rights Council (UNHRC) and waged endless wars on the planet, is in no way fit to claim it is still the champion and supporter of democracy and human rights on the world stage.
Tell that to United States Secretary of State Mike Pompeo. He is still under the influence that the State Department has the divine right and moral authority to ink annual Country Reports on Human Rights Practices and censure UNHRC members, including Iran, South Sudan, Nicaragua and China. Lo and behold! Pompeo did just that on March 13 and in front of many reporters and cameras.
The outrageous part of this particular media circus was that Pompeo even went the extra mile to single out China, alleging that the planet's second-biggest economy was “in a league of its own when it comes to human rights violations”. 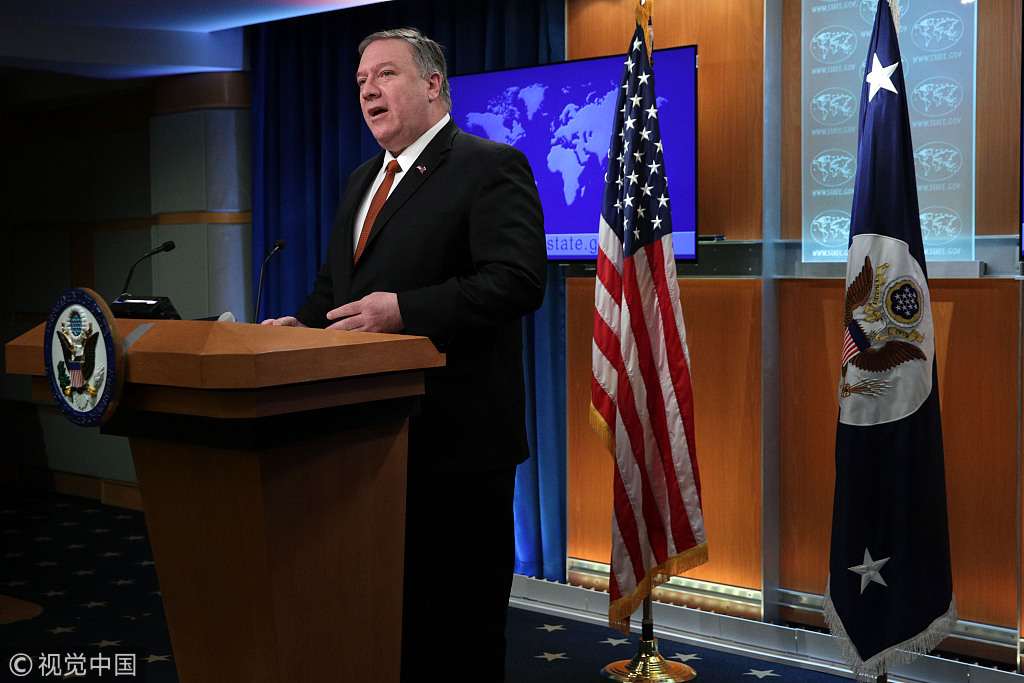 On Thursday, March 14, the Chinese foreign ministry spokesman, Lu Kang, was quick to hit back in strong terms after the State Department singled out Beijing's human rights record. Lu attacked the U.S. for its record on gun deaths, racial discrimination, media freedom and more, arguing that the U.S. report was filled with “ideological prejudice” and groundless accusations.
This is not an attempt to claim that China has not made any mistake in safeguarding human rights, or to substantiate that China's human rights record is perfect. It's not, just like any other nation in the world, including the United States. That's because we are not living in a perfect universe.
However, Lu had every right to say that the United States is yet to “take a hard look at its own domestic human rights record, and first take care of its own affairs.”
It's just Lu who has come to the conclusion that the Land of the Free is plagued with racism, discrimination and human rights abuses.
According to the U.S.-based Commission on Civil Rights, immigrant detention centers of the United States are plagued with human rights abuses. These violations include denial of food and medical care, lack of due process and sexual assault. “These violations are so widespread that all families should be released, detentions reduced, and alternatives to incarceration fostered,” the Commission warns.
The Commission has based its findings on hearings as well as visits to immigrant detention centers nationwide, particularly those along the U.S.-Mexican border. One of these facilities in Karnes City, Texas, is operated by the notorious private prison company GEO Group.
Karnes is the site of long-term organizing and numerous hunger strikes led by desperate mothers locked up with their malnourished children, or separated from their children, to protest their inhumane conditions of confinement.
These desperate families as well as illegal migrants and asylum seekers supposedly come to the United States to escape harsh living conditions or persecution, but once they cross the U.S. border, the government apprehends and detains them in conditions that are similar to the horrific conditions they faced in their home countries. 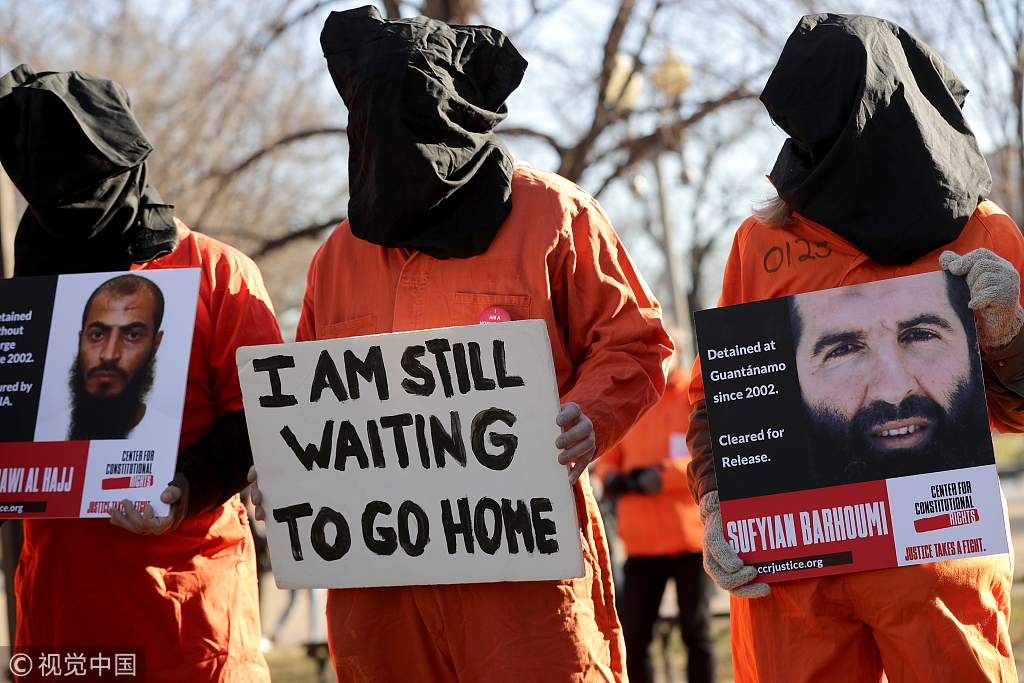 Demonstrators wearing orange jumpsuits and hoods over their heads rally to demand closure of the detention camp at the U.S. Naval Station in Guantanamo Bay, Cuba, outside the White House January 11, 2019, in Washington, D.C. /VCG Photo.

Demonstrators wearing orange jumpsuits and hoods over their heads rally to demand closure of the detention camp at the U.S. Naval Station in Guantanamo Bay, Cuba, outside the White House January 11, 2019, in Washington, D.C. /VCG Photo.

Nor is that all. The Commission's latest report describes many other brutal conditions, in which migrants, refugees and asylum seekers are treated like criminals and stripped of their basic rights. The Commission summarizes its findings:
1. Detention centers are not complying with international standards intended to promote humane treatment of detainees.
2. By continuing to detain unaccompanied children and families, Department of Homeland Security is not respecting the civil rights and due process rights of detainees.
3. Department of Homeland Security does not protect detainees from sexual assault and abuse and needs to come into full compliance with the Prison Rape Elimination Act.
4. Some detention facilities don't provide good medical care, deny immigrants, refugees and asylum seekers the chance to try to get lawyers, look the other way when rape or sexual abuse occurs, and don't allow Muslims adequate leeway to practice their religion, including the right to pray and fast in the month of Ramadan.
If this particular report is not uncontestable, we don't know what is. This moral disaster and deliberate legal failure has nothing to do with China or the State Department's latest Country Reports on Human Rights Practices.
U.S. government officials, including Mike Pompeo, can portray the Commission's report as “rehashed innuendo and discredited accusations,” or even call immigrants "illegal aliens" and "invading hordes."
Still, their denials do not change the fact that the Commission's findings echo what the UN Human Rights Council has also argued in its annual reports: “U.S. policies of detention are especially unjust, given the role of the U.S. in driving the economic and political conditions displacing people from Latin America and elsewhere…” 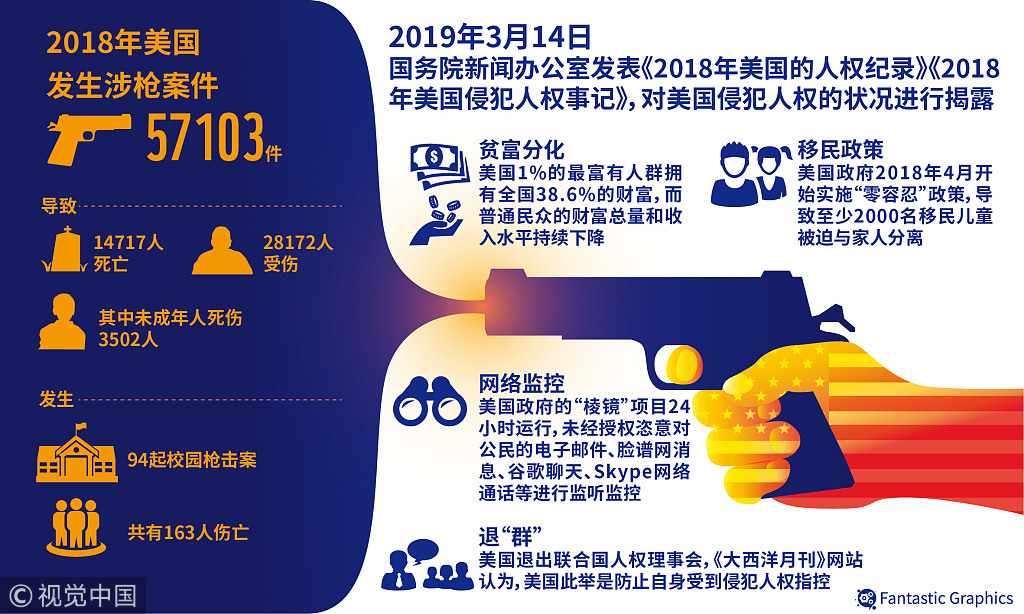 China on Thursday published a report on the human rights situation in the United States. The report, titled "Human Rights Record of the United States in 2018," was released by the Information Office of the State Council. /VCG Photo.

China on Thursday published a report on the human rights situation in the United States. The report, titled "Human Rights Record of the United States in 2018," was released by the Information Office of the State Council. /VCG Photo.

It is said where there is smoke, there is fire. The self-styled “human rights defenders” of the U.S. State Department only fool themselves when they lecture other nations, including China, on human rights. They know full well that their own country has a “flawed and lackluster” human rights record which is uncontestable.
What's more, these systematic violations are still ongoing and there has been little change on the ground by President Trump and his White Supremacist administration officials.
It is time these systematic breaches gained greater traction at the United Nations Human Rights Council.
These breaches will not go away unless the world body introduces a resolution that obliges the U.S. to ban government-run and private immigrant prisons, end family detentions in torture-like conditions, stop separating children from mothers, release families/refugees/asylum seekers and offer them humanitarian protections, and eliminate an immigrant detention system that is rife with injustices, discrimination and double standards.
(If you want to contribute and have specific expertise, please contact us at opinions@cgtn.com.)‍