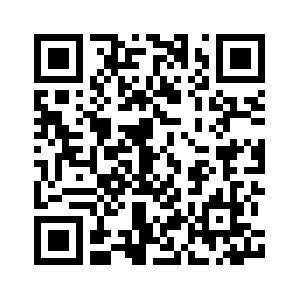 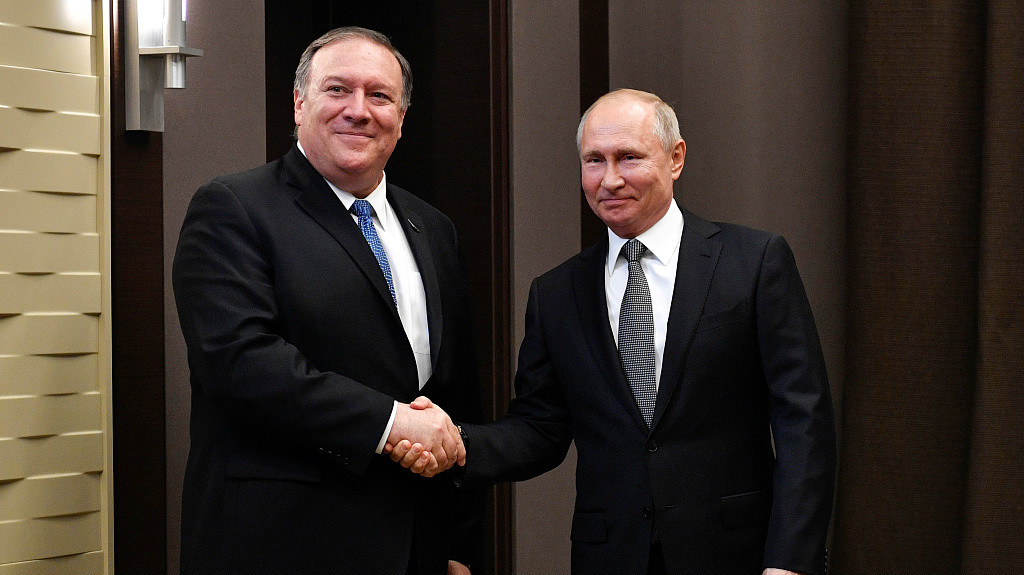 Editor's note: Andrew Korybko is a Moscow-based American political analyst. The article reflects the author's opinion, and not necessarily the views of CGTN.
U.S. Secretary of State Pompeo visited the Russian Black Sea city of Sochi for talks with his Russian counterpart Lavrov and President Vladimir Putin on Tuesday after abruptly canceling the first part of his trip to Moscow on Monday in order to brief European leaders in Brussels on his country's alleged intelligence about so-called Iranian threats in the wider Persian Gulf region.
Pompeo's trip occurred against the backdrop of the "Russiagate" scandal being debunked as a conspiracy theory by "deep state" coup plotters within the U.S.'s permanent military, intelligence, and diplomatic bureaucracies, which therefore gave President Donald Trump much more flexibility to handle bilateral affairs with Russia that he originally promised during his 2016 campaign. The American leader preached the need for what would essentially amount to a "New Detente" in order to pragmatically promote his country's interests, believing that the Obama Administration irresponsibly ruined relations with Russia in the aftermath of the 2014 Ukrainian revolution.
Pompeo tweeted before the meeting that "on some issues we may agree, on others we may disagree, but when it's in our national interests, it is our responsibility to find a way forward", which set the tone for the talks and naturally led to him reaffirming Trump's intent to improve relations with Russia. 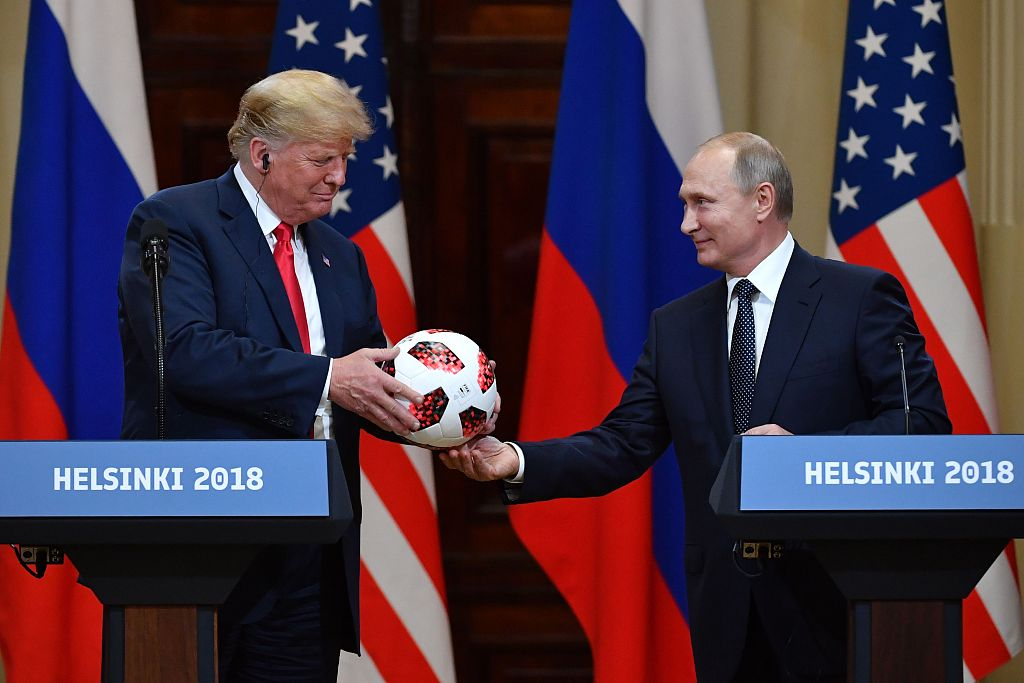 Russia's President Vladimir Putin (R) offers a ball of the 2018 football World Cup to U.S. President Donald Trump during a joint press conference after a meeting at the Presidential Palace in Helsinki, July 16, 2018. /VCG Photo

Russia's President Vladimir Putin (R) offers a ball of the 2018 football World Cup to U.S. President Donald Trump during a joint press conference after a meeting at the Presidential Palace in Helsinki, July 16, 2018. /VCG Photo

To its credit, Russia has patiently remained committed to the prospective geopolitical breakthrough of a "New Detente" despite the antagonistic moves that Trump was compelled to do in response to escalating "deep state" pressure during the height of the "Russiagate" hysteria, which is why its media enthusiastically reported about the broad range of topics that would be discussed during the talks.
The most important from a Russian perspective are the simmering crisis with Iran regarding the nuclear deal and regional attacks that the U.S. blames on its proxies, the ongoing conflict in Syria, the rolling regime change operation against Venezuela, the DPRK nuclear negotiations, Ukraine's new president, and the possibility of a new nuclear accord with the U.S.
In other words, Russia is most interested in candidly discussing geopolitical and strategic issues to identify the most likely areas of mutual compromise between it and the U.S. as part of a comprehensive "New Detente" that could stabilize the emerging Multipolar World Order and lift the Western sanctions against Moscow.
Given how sensitive these talks are, scant details were leaked about their contents, though the overall atmosphere was visibly upbeat and the rhetoric coming from both sides was pragmatic and promising.
Therefore, observers can only speculate about the content of the "package deals" that might have been discussed concerning quid pro quos on each of these issues (ex: Russia encouraging Iran's dignified but "phased withdrawal" from Syria in exchange for America encouraging Ukraine's new president to abide by the Minsk Agreements), but it should not be taken for granted that some degree of progress was made behind the scenes. 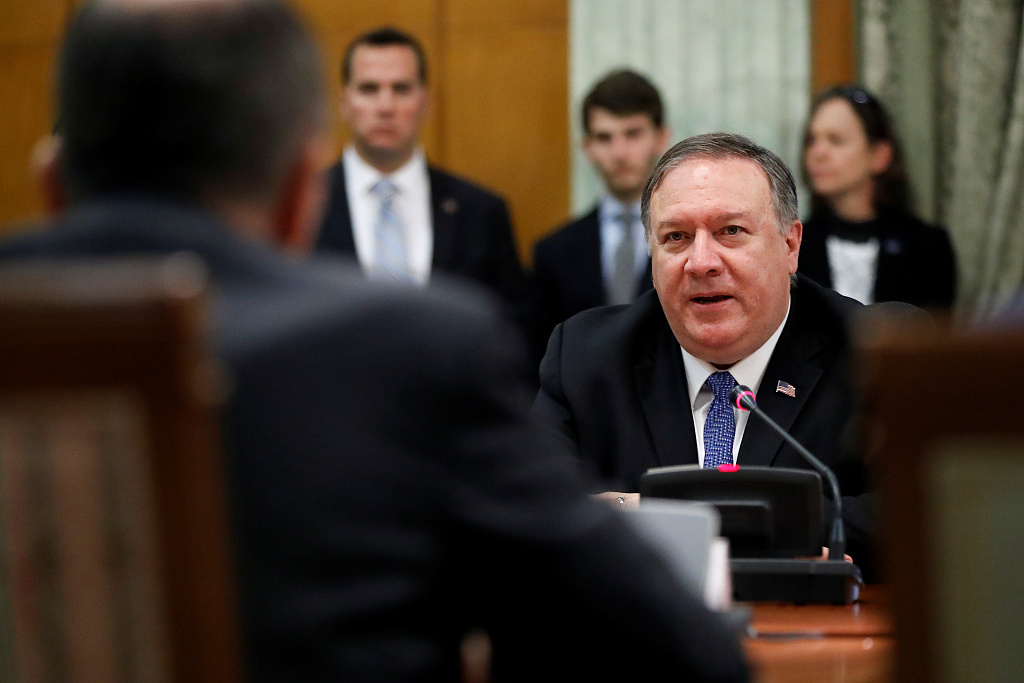 Russia and the U.S. are competing in many theaters all across the world, so coming to an understanding on each of these issues through mutual compromises will be beneficial not only for their own individual interests but also for the countries in which their rivalry is unfolding. Syria and Ukraine were literally torn apart because of this, though both of them might finally see a lasting and sustainable peace if these powers decide to reach a deal.
Venezuela, for its part, might be saved from the same fate if an agreement can be reached there too as part of this "New Detente". On the global level, there's no reason for Russia and the U.S. to enter into another costly and destabilizing arms race; hence why both parties expressed sincere interest in negotiating an extension to the new start.
Taken together, Russian-American relations can become a stabilizing force in International Affairs if a "New Detente" is eventually reached and each of them finally recognizes that they have more to gain by compromising with one another in a win-win manner than competing in a zero-sum one.
(If you want to contribute and have specific expertise, please contact us at opinions@cgtn.com.)