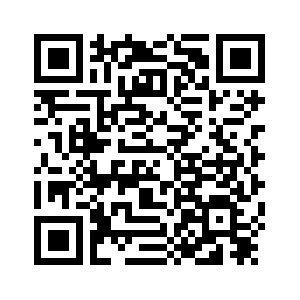 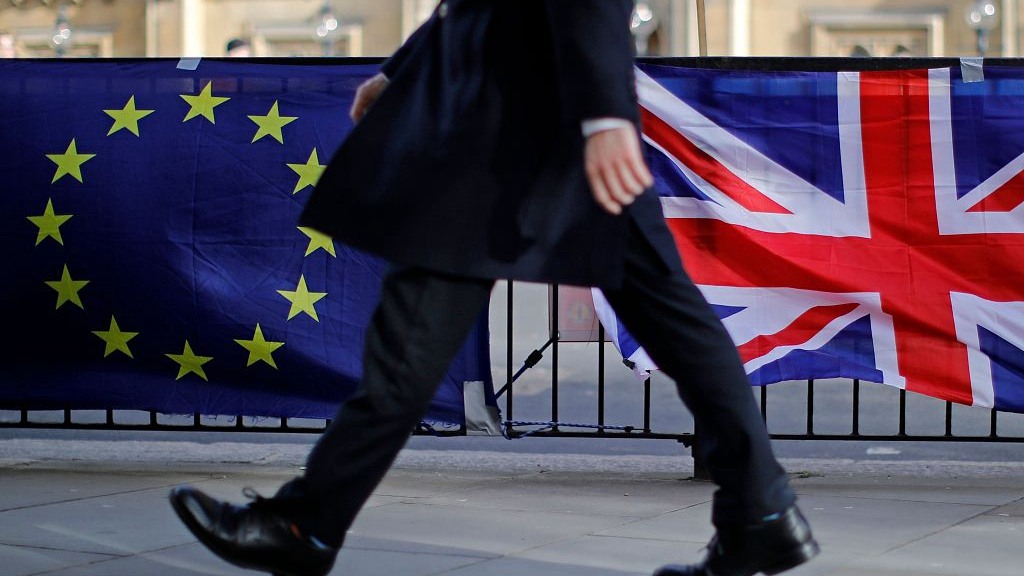 Editor's note: Zhu Zheng is an assistant professor at the Law School with China University of Political Science and Law. The article reflects the author's opinion, and not necessarily the views of CGTN.
With less than 50 days left before the final date for leaving the EU, Britain is hitting peak Brexit mayhem, with Members of Parliament constantly passing up various chances and the cabinet splitting on many issues.
On February 10, Theresa May issued a formal letter to Jeremy Corbyn, stressing her aims to keep the UK in the customs union. In order to win over wavering Labor MPs, May struck a conciliatory tone over environmental and worker's rights, partly accepting Corbyn's suggestion of automatic alignment with EU standards, albeit with reservations.
May's response has painted a portrait of the visceral division between the two parties in the UK. And more deeply, it may have revealed the inherent defects of democracy in the Western world.
When it comes to which route best suits the country, there is a three-way split among those who see a no-deal Brexit as economic and political Armageddon, those who would prefer a deal but secretly like the idea of a purer rupture, and those sitting in the middle who have their fingers in their ears and do not care.
Putting aside those just sitting out the Brexit, it appears that even inside the Tory and Labor parties, the opinions are deeply divided. 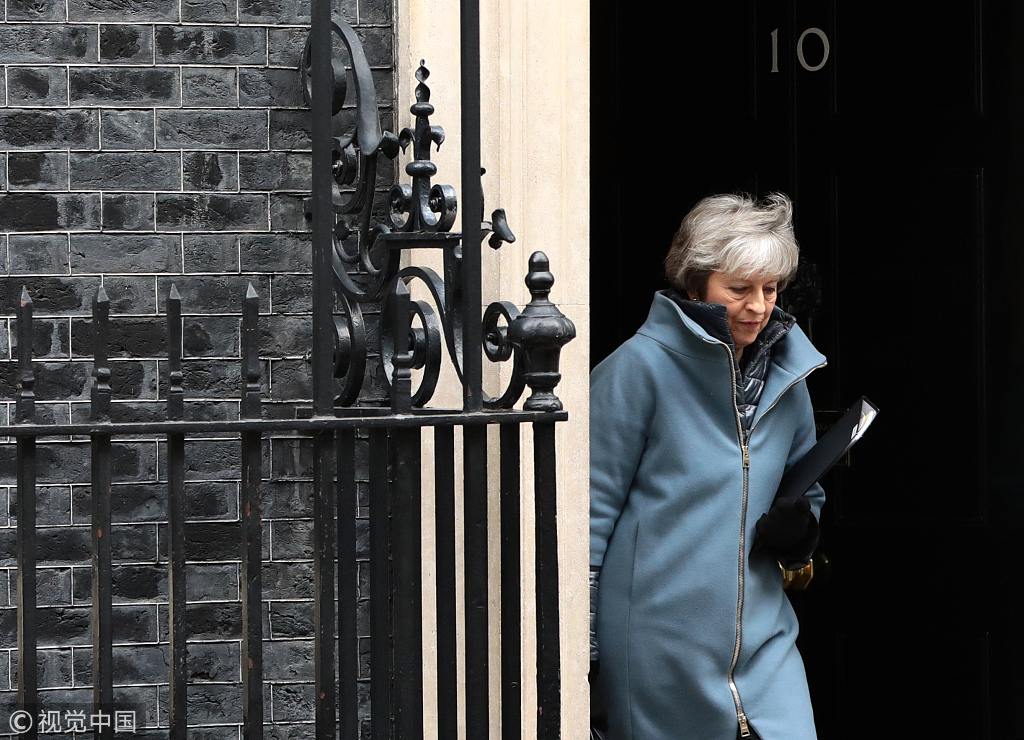 Some Labor members, for example, argued that Britain should remain within the EU bloc via a referendum, whereas the top brasses have accepted the 2016 referendum result and agreed to leave if their Brexit proposals are carried out.
The Tory has its equivalent division. By and large, there is now a huge divide between those who will only uphold a Brexit deal if the backstop is completely discarded, and those who would accept some form of political and legal promises that the backstop arrangement would not be forever.
The most upsetting fact is that it is now impossible to come up with a Brexit deal without securing the majority support of MPs across the aisle in the House.
In other words, if the Brexit deal were struck, it must be a deal which simultaneously breaks up with either the proposals of the Tory Party or the Labour Party or, more probably, a deal between the two parties.
However, be it the former or the latter choice, it means that both party members will have to break away from their own parties, and the British political system that is presently dominated by party politics would plunge into chaos. 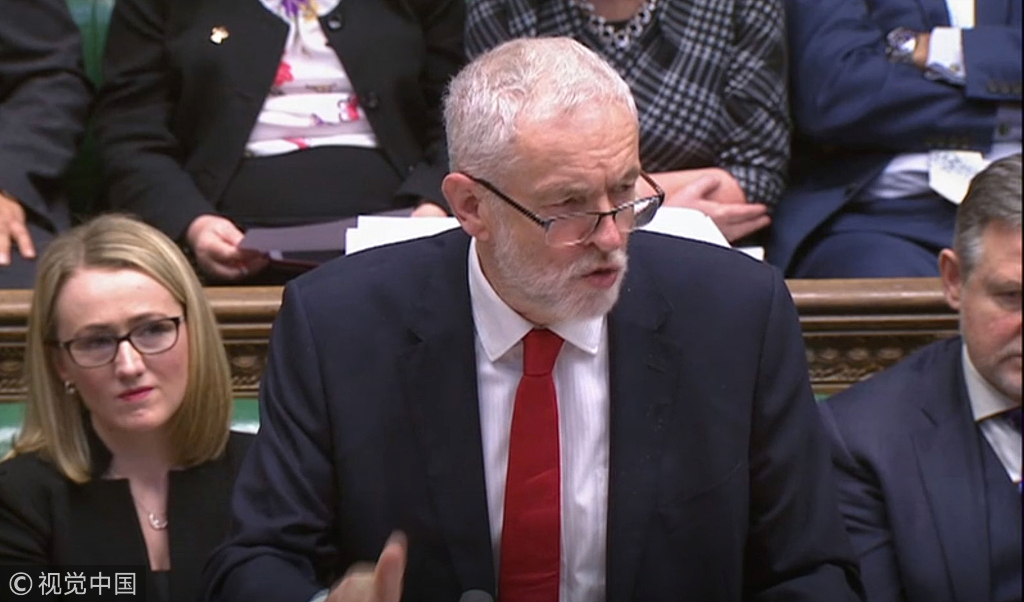 Labour leader Jeremy Corbyn speaking after Prime Minister Theresa May gave a statement about progress on Brexit talks to MPs in the House of Commons, London, February 12, 2019. /VCG Photo.

Labour leader Jeremy Corbyn speaking after Prime Minister Theresa May gave a statement about progress on Brexit talks to MPs in the House of Commons, London, February 12, 2019. /VCG Photo.

This has revealed another facet of democracy in the UK. Although in theory, multiple parties would represent dynamic views of the people, with the Tory and Labour parties becoming increasingly sectarian, voters will have to choose between the two big parties, and most often than not, these nose-holding voters who were compelled to make a forced choice do not like what's put before them.
According to a survey by pollsters, more than half of the electorate say their views are now properly represented by the existing political parties, and when asked who would make a best prime minister, Theresa May and Jeremy Corbyn are regularly beaten into second and third play by “neither.”
Yes, this is reflected in the past general elections. The Tories have not won a solid parliamentary majority since 1987, and the membership of Labour has been shriveling over the past few years.
It is still true that the big two can gather up a lot of votes, but as Robert A. Dahl, Juan J. Linz and many political scientists claimed, the breakdown of democratic regimes is often associated with the situation where a state is experiencing some big transitions, and some big social events deal a heavy blow to the integrity of a democratic system.
Perhaps it is too early to say that the Brexit heralds the demise of democracy, but Brexit has undoubtedly had a significant bearing on the British political system.
(If you want to contribute and have specific expertise, please contact us at opinions@cgtn.com.)