Opinion: Why China is capable of dealing with reduced purchases of US soybeans
Kong Qingjiang 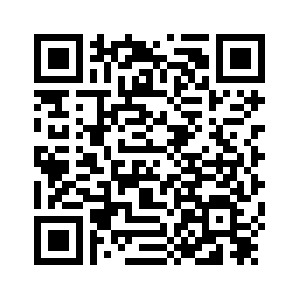 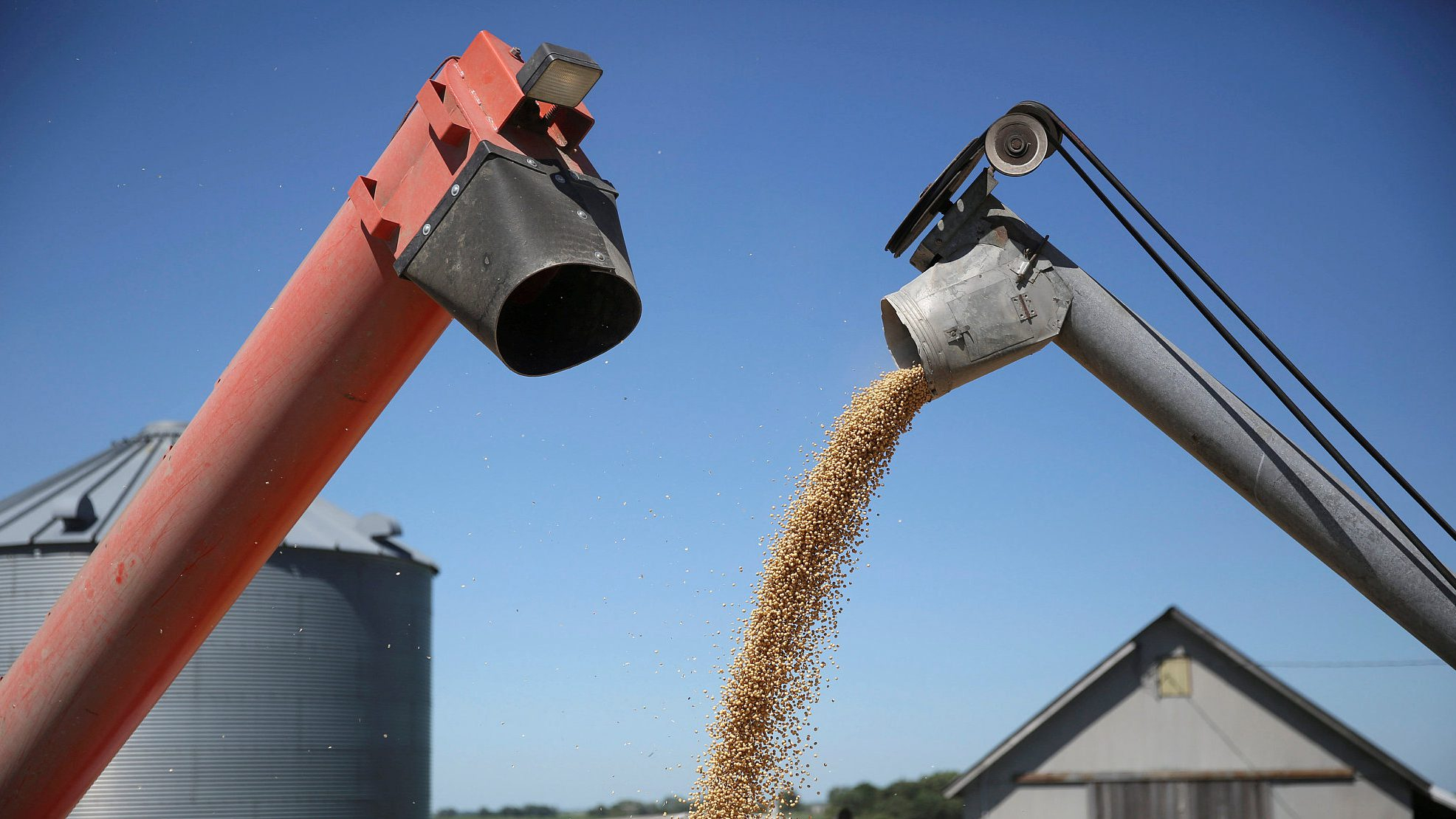 ‍Editor's note: Kong Qingjiang is the dean of the School of International Law under China University of Political Science and Law. The article reflects the author's opinion, and not necessarily the views of CGTN.
Soybeans are among the major foodstuffs and edible oils that have fed the Chinese people for centuries. The byproducts of soybeans are often used as livestock feed. The late 1990s witnessed a steady rise of soybean imports, which is largely due to improved living standards. In 2003, the Chinese import of soybeans even exceeded the total production of the crops in the country.
The dramatic increase of soybean imports in China matches the gigantic supply of the crop from the US and a few other countries. Soybeans are an important US agricultural export, and about 62 percent of those exports go to China, totaling 33 million tons.
This perfect synchrony was disrupted by the trade war that Donald Trump waged against China starting in early 2018. As a defensive response to the US imposition of punitive tariffs on Chinese goods, China decided to levy an additional 25 percent of import duty against soybeans from the US.
As a result of the trade war, China’s import of US soybeans is expected to decrease by a large margin. Some Chinese soybean processing firms have even effectively ended purchase the US crop.
While many industry insiders and Chinese officials estimate that the drop in Chinese purchases would amount to over 10 million tons, some outside observers are wondering whether China is capable of reducing its soybean imports. 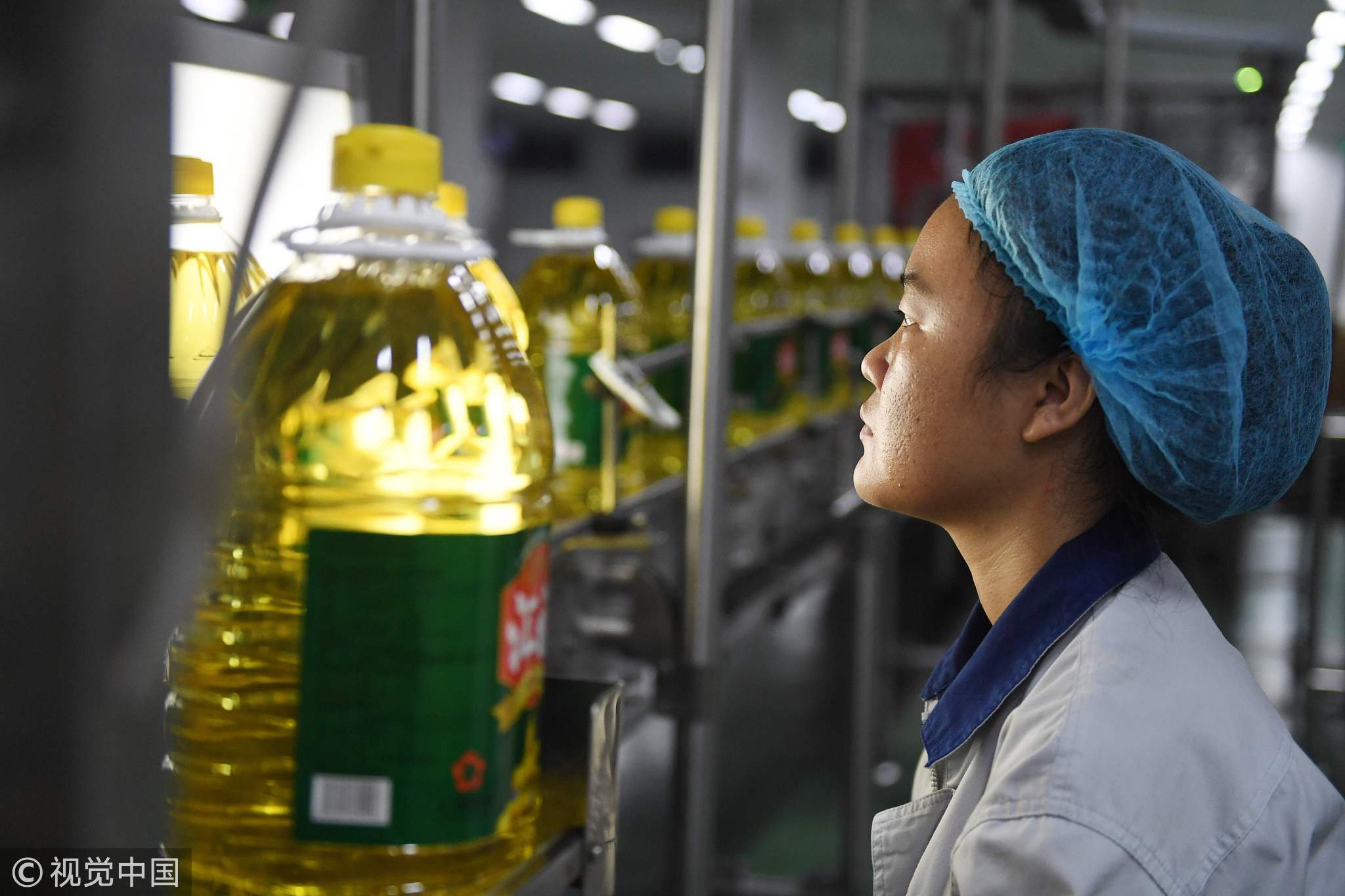 July 19, 2018: A worker monitoring a soybean oil production line at the factory. The company is currently using soybeans imported from Brazil. / VCG Photo

July 19, 2018: A worker monitoring a soybean oil production line at the factory. The company is currently using soybeans imported from Brazil. / VCG Photo

I believe this is redundant and even tantamount to wishful thinking. Indeed, quite a number of China-consumed soybeans are from the US and other countries. However, one should first remember that China, which has been a producer of soybeans for 4,000 years, became the net soybean importer only two decades ago.
Before 1996, China was a net exporter of soybeans. China’s dependence on soybean imports cannot be taken for granted. As a matter of fact, food security has always been a major concern among Chinese policymakers.
The Chinese government attaches importance to food self-sufficiency. The increase of soybean imports has not gone so far as to be beyond control.
According to a scientific survey by the Central China Agriculture University, 60 million mu (approximately, 10 million acres) more of land can be used to grow other alternative oil crops, which are expected to generate 10-20 million tons of oil crops. Moreover, the Ministry of Agriculture and Rural Affairs announced on May 16 that China would expand the soybean planting area by 10 million mu (approximately, 1.65 million acres).
The above measures are not just countermeasures vis-à-vis the import restraints, but also in line with the food security policy. The expected increase of soybean production and other oil crops will make up for the reduction of soybean imports.
It might turn out to be unexpected to the Trump administration that the China-US trade war could even become an opportunity for China to raise its food self-sufficiency ratio and reduce its external dependency. 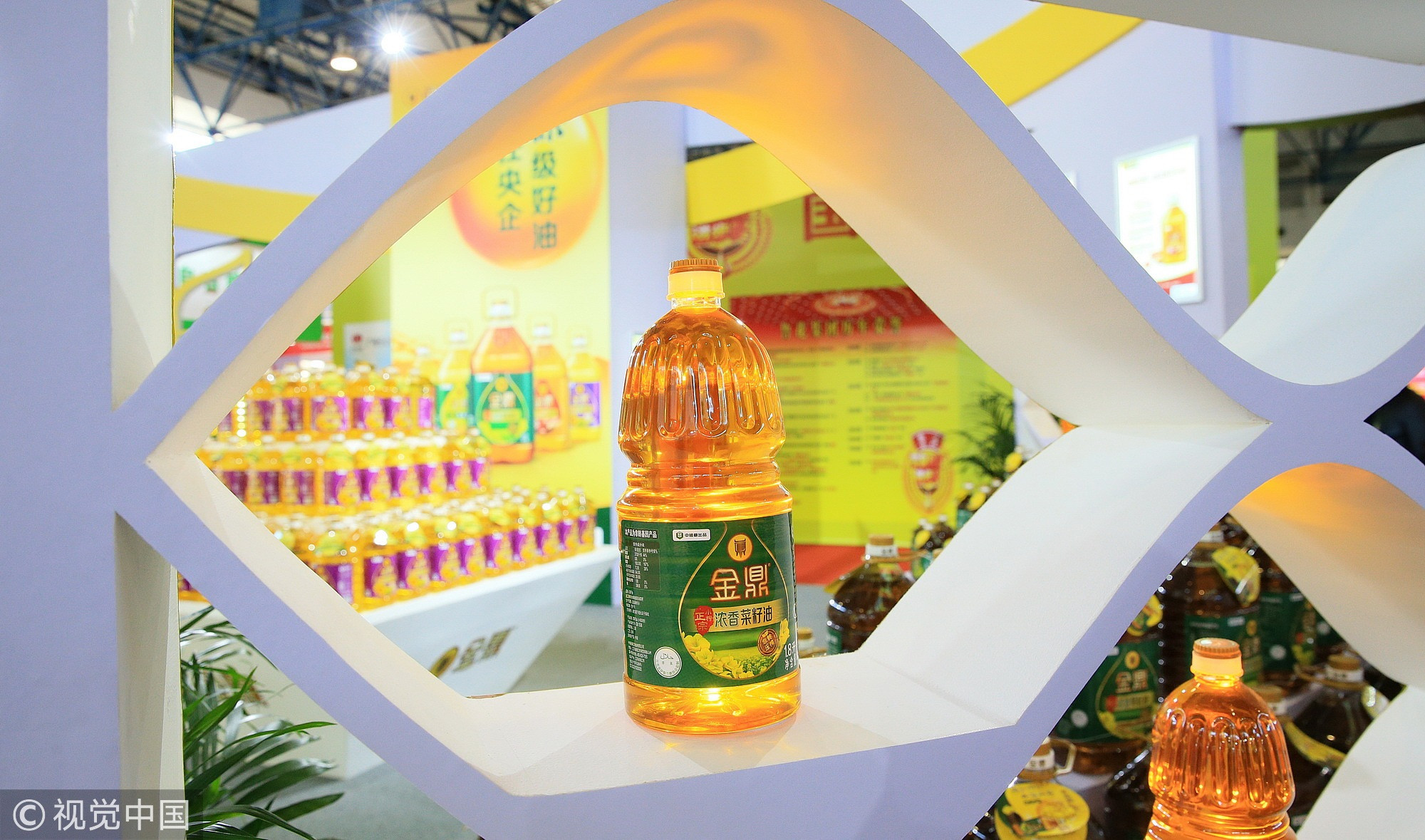 Secondly, as a large portion of soybeans is imported to produce edible oil, crude palm oil, and other edible oils are substituted for soybean oil. Crude palm oil, for example, can be imported from Southeast Asian countries as the alternative to soybeans.
During his visit in May 2018 to Indonesia, Premier Li Keqiang promised an 11 percent increase of the quota for palm oil import from Indonesia. It is estimated that the increase of crude palm oil will be 500 million tons, which can make up for a significant portion of reduced soybean imports.
Thirdly, Chinese consumers, particularly those from the middle class, are more and more conscious of genetically-modified crops, to which a large portion of the US soybeans belong.
Even though they are not fully aware of the effect of genetically-engineered soybeans on human health, their preference has been tilted towards non-GMO soybeans for various reasons. This will not only reduce the dependence of the Chinese market on the US soybeans, but make it easier for the consumers to switch from US-sourced soybeans to local soybeans which are normally produced free of GMO.
Last but not least, Chinese people, who have been influenced and even mobilized by nationalism throughout the years, are standing up for the government in combating the trade war. They are willing to tolerate, if necessary, a decreasing living standard which might be caused by the reduction of soybean imports, among others. One should never underestimate the unity of the general public and the determination of the government in fighting the trade spat. 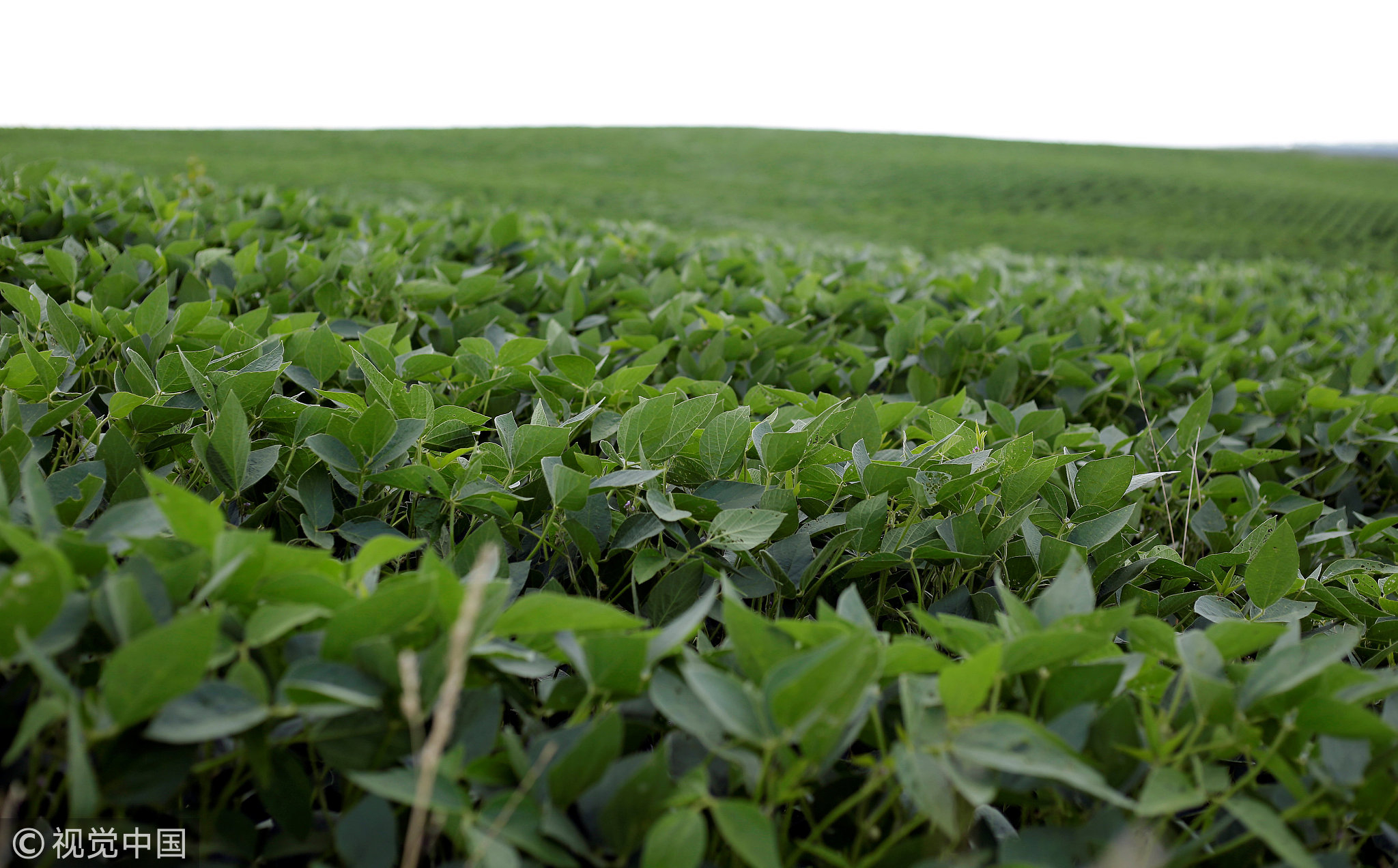 Needless to say, soybeans were targeted due to the fact that soybeans and their export are a sensitive issue for US politicians, who hunger for votes from farmers in agricultural states. As China imposes a 25-percent tariff on imported US soybeans, its US soybean imports are poised to fall by 65 percent.
As a result, the upcoming year is expected to see a fall of 37 percent in US soybean exports, a decrease of 15 percent in total soybean production, and a fall of 2.6 to 5.2 percent in US soybean prices. In the end, the US economy may lose 17 billion to 33 billion US dollars annually.
Given that the farmers of the states that grow and export soybeans were supporters of Donald Trump during his presidential campaign, he announced a plan to subsidize American farmers for up to 12 billion dollars for their suffering of lost export sales resulting therefrom.
This is a clear indication of the fact that he has to face the wrath of farmers due to his own escalating tariff actions. As a Peterson Institute of International economics study shows, soybeans illustrate Trump's wrong-footed approach to trade. For China, soybean will continue to be one of the biggest cards that it can play in the trade war.