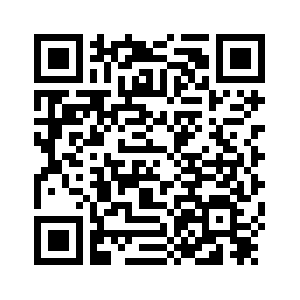 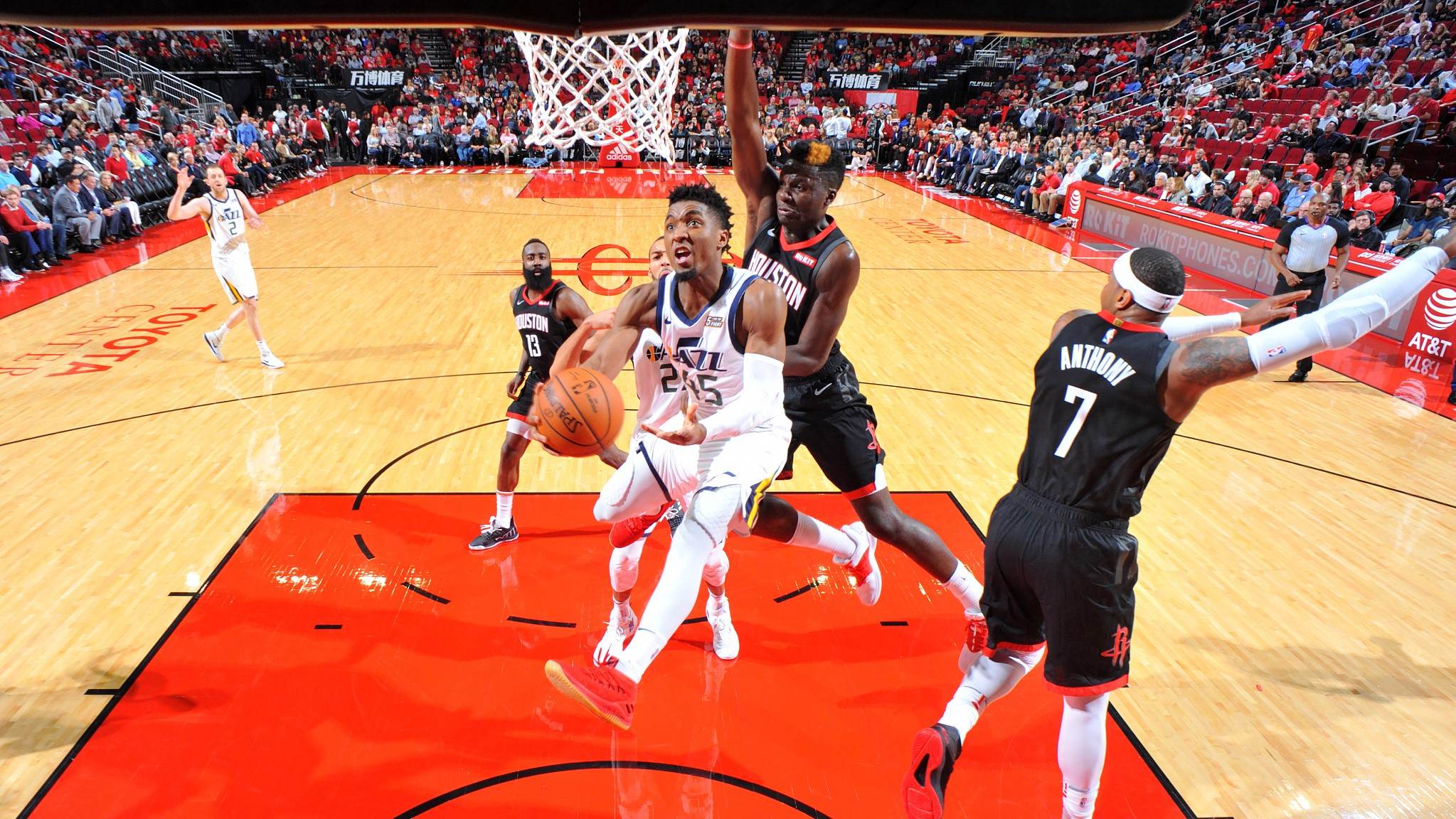 The 2018-19 NBA season continued on Wednesday with 11 games. The Houston Rockets lost to the Utah Jazz 89-100 at home, failing to win their past two games without Chris Paul. LeBron James and his Los Angeles Lakers got their first victory by defeating the Phoenix Suns 131-113. The Golden State Warriors at the Oracle Arena took a big win against the Washington Wizards 144-122 as Steph Curry scored 51 points in the three quarters, including 11 three-pointers. 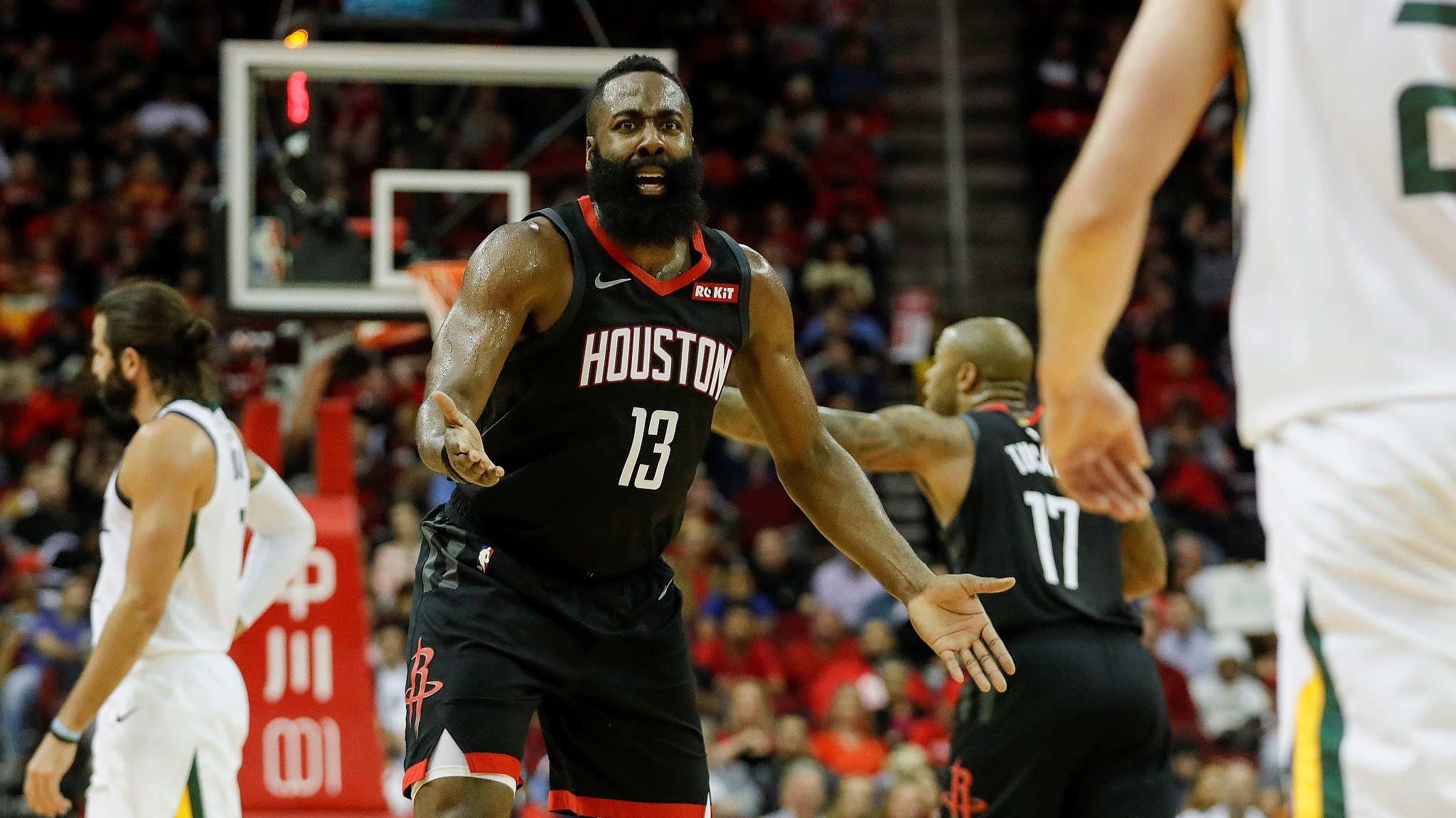 The Rockets will not reproduce last season's success if they rely on James Harden #13 alone. /VCG Photo

The Rockets will not reproduce last season's success if they rely on James Harden #13 alone. /VCG Photo

With Paul suspended and James Ennis injured, the Rockets had to put Eric Gordon and Michael Carter-Williams (MCW) on the starting squad. Though they managed to end the first quarter with a lead of 29-24, Houston found it difficult to maintain their offensive momentum in the second quarter and trailed 44-52 after the first half.
Trying to catch up, Houston started Carmelo Anthony in the second half. Anthony and Harden together launched multiple counter-strikes, but could not tie the score with the Jazz playing well as a team and Donovan Mitchell who kept attacking the paint area. After Ricky Rubio put down another two points, the Jazz managed to force a Rockets shot clock violation before Harden left the court with an injury. Without their star, Houston couldn't put up any resistance and had to accept their second loss in a row.
Mitchell scored the a game-high 38 points for the Jazz while his teammate Rudy Gobert put down 12 points, 13 rebounds and three blocks. Harden ended with 29 points, five rebounds and seven assists while Anthony scored 22 points for the Rockets.

James and Lakers get their first win 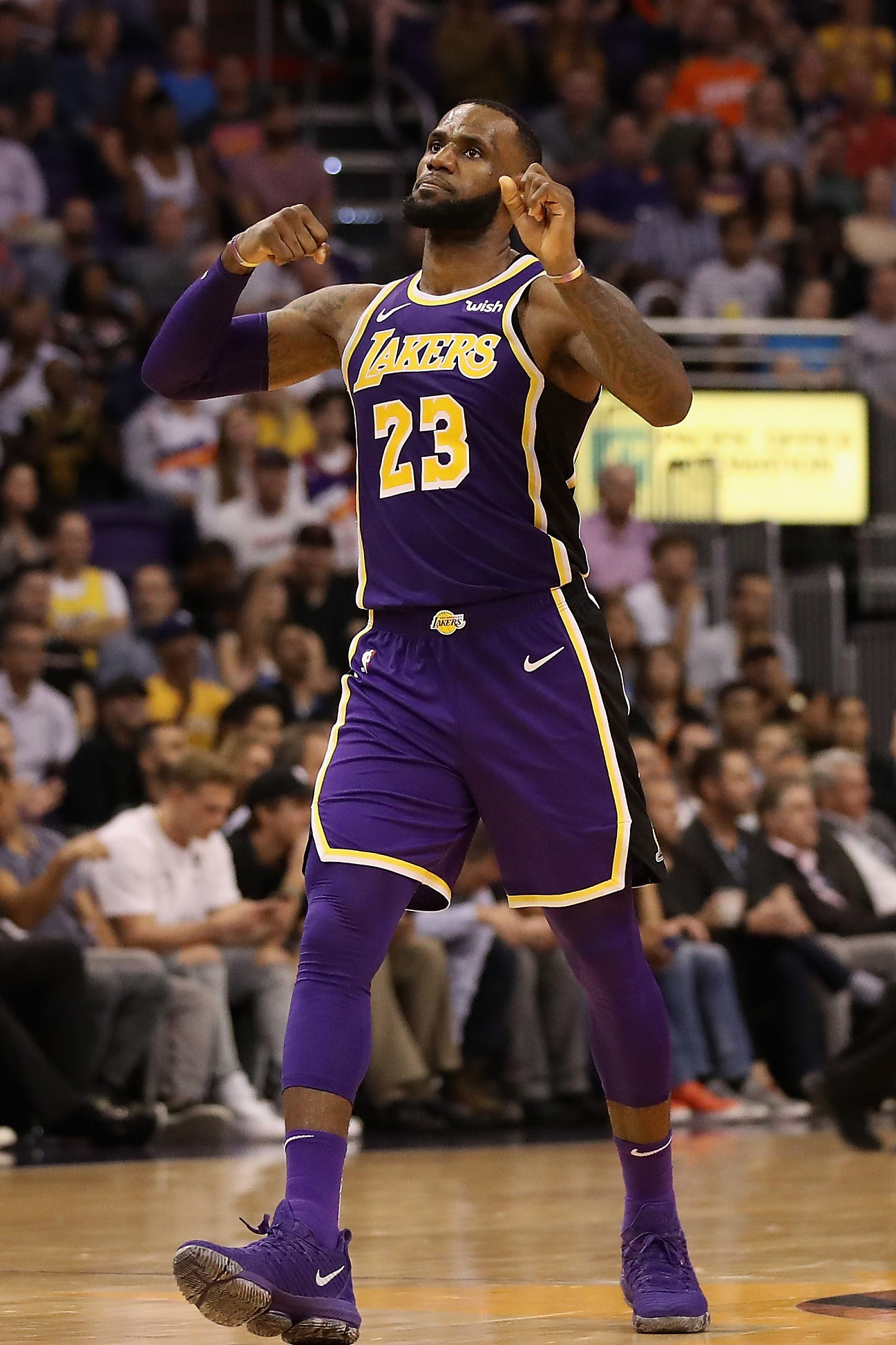 LeBron James finally wins his first game with the Lakers after defeating the Suns 131-113. /VCG Photo

LeBron James finally wins his first game with the Lakers after defeating the Suns 131-113. /VCG Photo

The Lakers started the season with three consecutive losses. They led 32-30 against the Suns in the first quarter at the Talking Stick Resort Arena and expanded the lead to 22 points after the first half with 10-0 and 17-2 runs.
Phoenix improved their offense in the third quarter but their terrible defense could not stop LA who were already on fire. The Suns' scoring ace Devin Booker had to return to the locker room because of a leg injury when a minute and 41 seconds left. Led by Lance Stephenson, the Lakers' bench players expanded the lead to 26 points in the fourth quarter, making the game a foregone conclusion.
James played only three quarters and scored 19 points, seven rebounds and 10 assists while the Lakers' center JaVale McGee put down 20 points including one three-pointer. The overall No.1 pick rookie Deandre Ayton took 22 points and 11 rebounds for Phoenix. 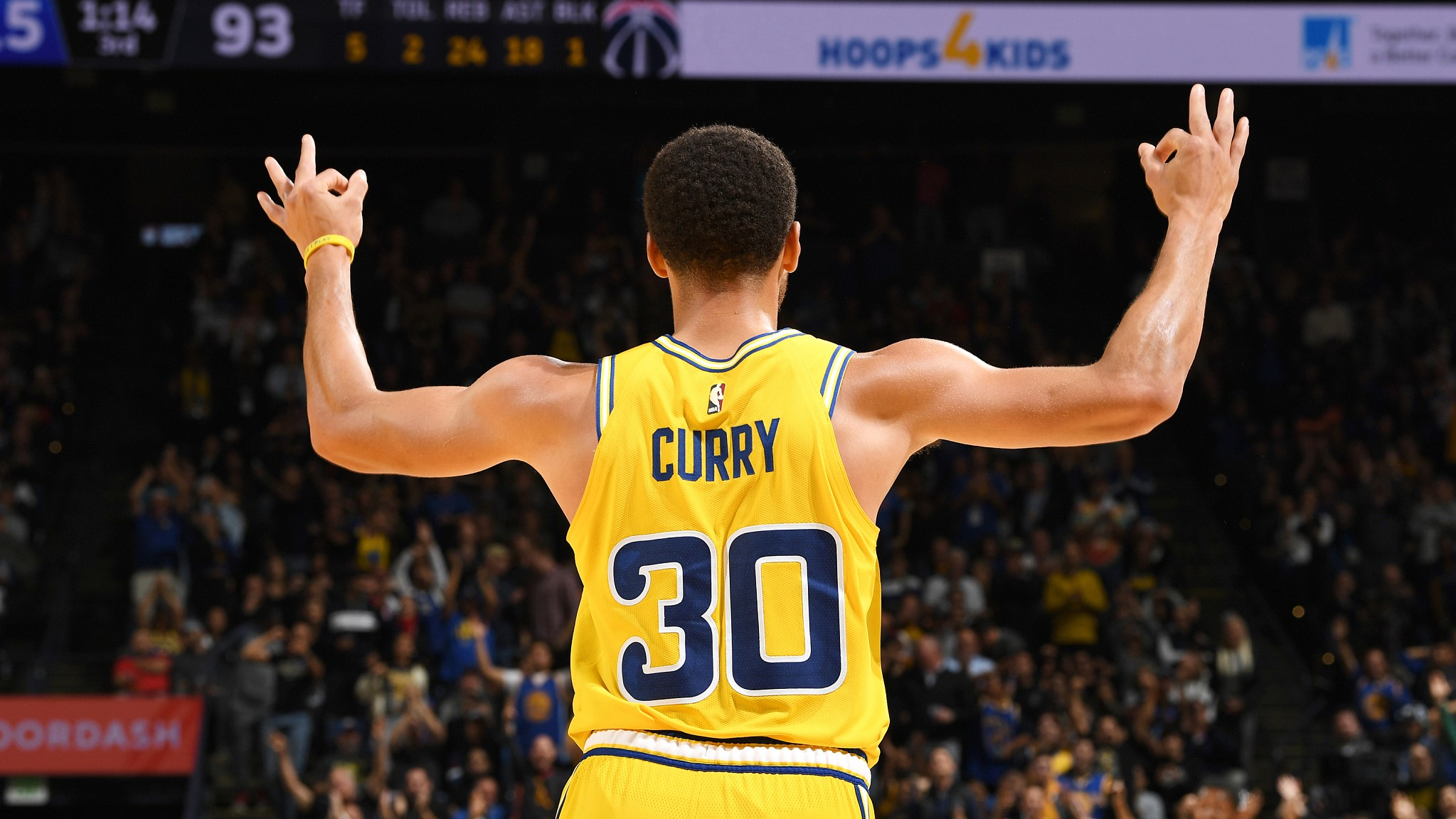 Golden State had an "attack alone" game with Washington at home. Curry turned on his scoring mode in the first quarter by making five three-pointers, while Kevin Durant also scored double digits in less than six minutes. However, the Warriors lost their focus on defense and watched the Wizards put down 37 points as well, leading 46-37 after the quarter.
Golden State continued their striking momentum in the second quarter with Curry, Durant and Klay Thompson accounting for all of the team's last 20 points. However, the Wizards refused to give up, as Bradley Bill came back with a chest injury and led his teammates to only being behind by nine points. 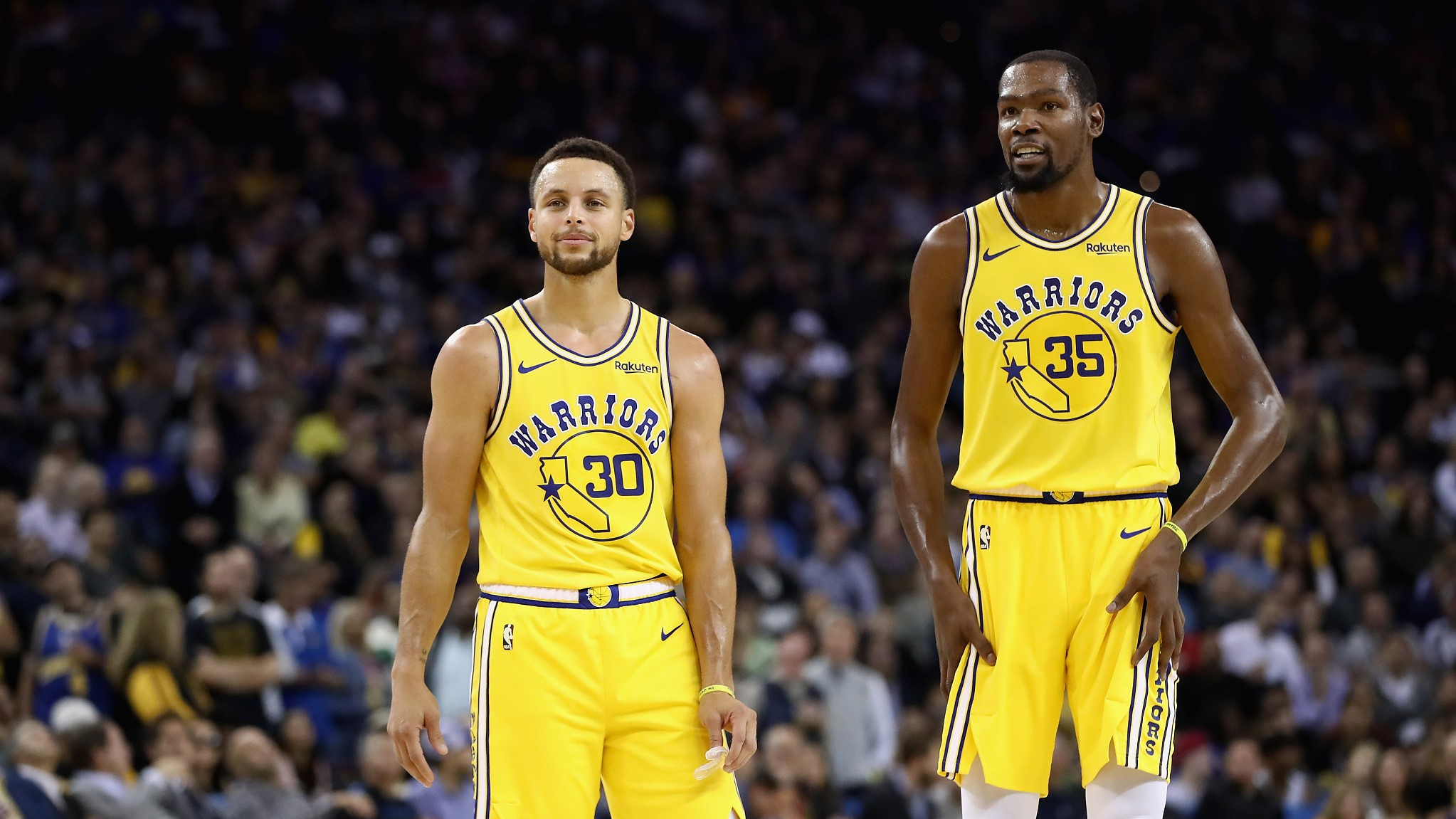 Both Curry #30 and Kevin Durant #35 are unstoppable in the game. /VCG Photo

Both Curry #30 and Kevin Durant #35 are unstoppable in the game. /VCG Photo

Curry put on his incredible performance again in the third quarter by making three consecutive three-pointers, including a 3+1. He helped Golden State expand the lead to over 20 points with another three-pointer when there was one minute and 20 seconds left. Curry became the second player this season to score over 50 points a game.
In the end, the Warriors crashed the Wizards 144-122. Curry scored in total 51 points and passed Jamal Crawford to rank No.5 on the list of NBA three-point scoring leaders with 2,162 shots made. He will need to make another 812 three-pointers to pass Ray Allen (2,973) to become No.1 on that list. Considering that Curry is only 30 years old and has already finished six straight regular seasons with over 200 three-pointers made, the day of him becoming the league's three-point scoring champion in history should not be far.
Other games on Wednesday included: (home teams in Bold)
Dallas Mavericks vs. Atlanta Hawks: 104-111
Brooklyn Nets vs. Cleveland Cavaliers: 102-86
New York Knicks vs. Miami Heat: 87-110
Minnesota Timberwolves vs. Toronto Raptors: 105-112
Charlotte Hornets vs. Chicago Bulls: 110-112 Chicago Bulls
Indiana Pacers vs. San Antonio Spurs: 116-96
Philadelphia 76ers vs. Milwaukee Bucks: 108-123
Memphis Grizzlies vs Sacramento Kings: 92-97