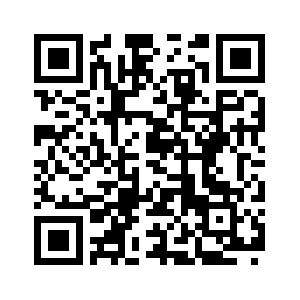 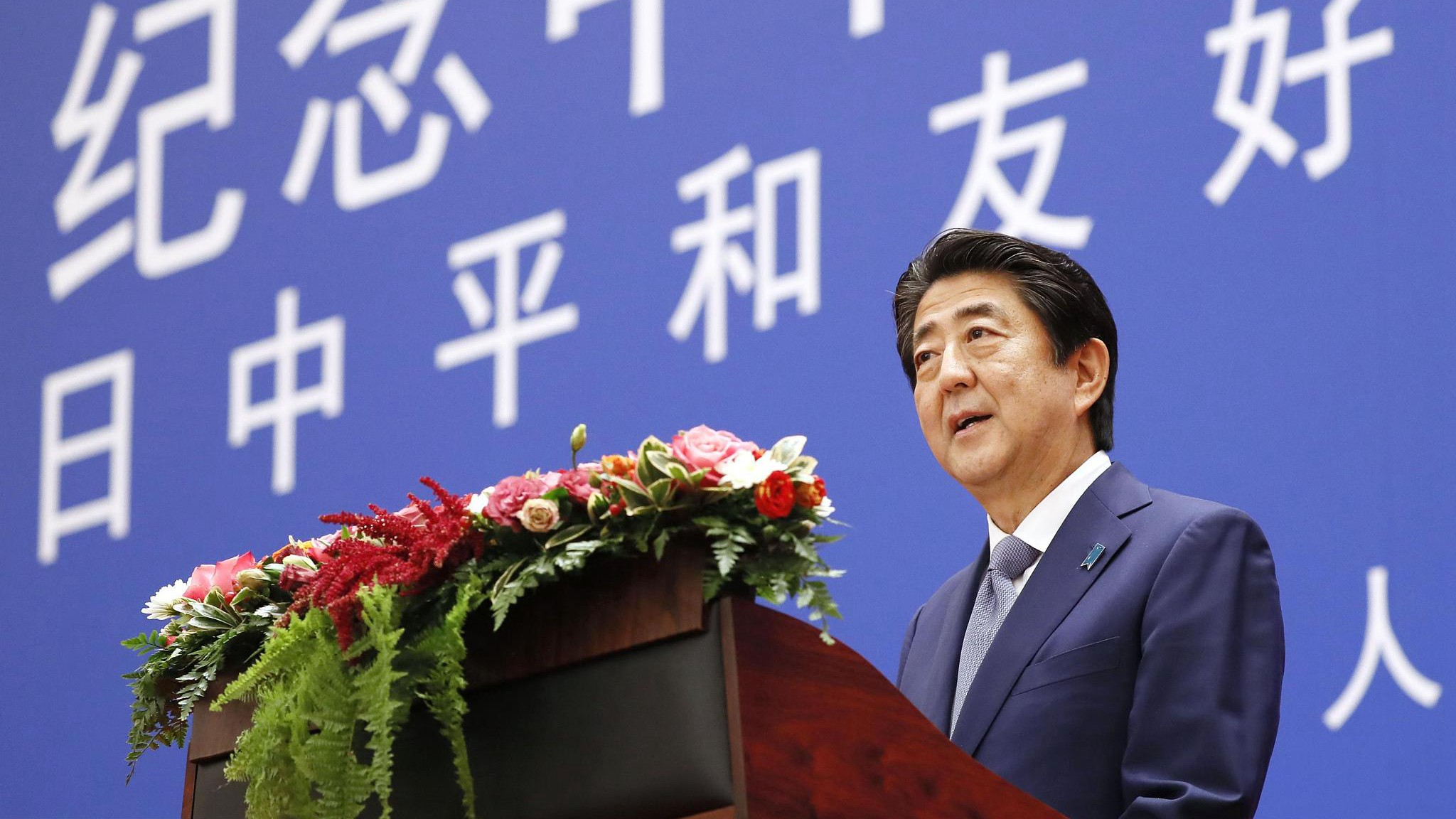 Editor's note: Xu Fangqing is a senior editor with China News Week and a non-resident fellow with the Center for China and Globalization. The article reflects the author's opinion, and not necessarily the views of CGTN.
Japanese Prime Minister Shinzo Abe is paying an official visit to China between October 25 and 27. Seven years have passed since a Japanese prime minister last visited China. For Abe himself, 12 years have passed since his last official trip to China in his capacity as the prime minister of Japan.
Being twice elected as the prime minister of Japan, Abe took completely different directions in Sino-Japanese relations to his predecessors. In the month after taking office in 2006, Abe chose China as his first destination of the official foreign trip, an unprecedented move in Japanese foreign policy.
The visit warmed up Sino-Japanese relations which were severely damaged by Junichiro Koizumi's visit to Yasukuni Shrine for six consecutive years.
But after being re-elected in 2012, Abe didn't pay a single official visit to China, except attending some important multilateral meetings in Beijing. Sino-Japanese relations have not been on the right track for a long time.
Back when Sino-Japanese relations were in a normal state, the two countries would be economically interdependent even when they had political disputes. 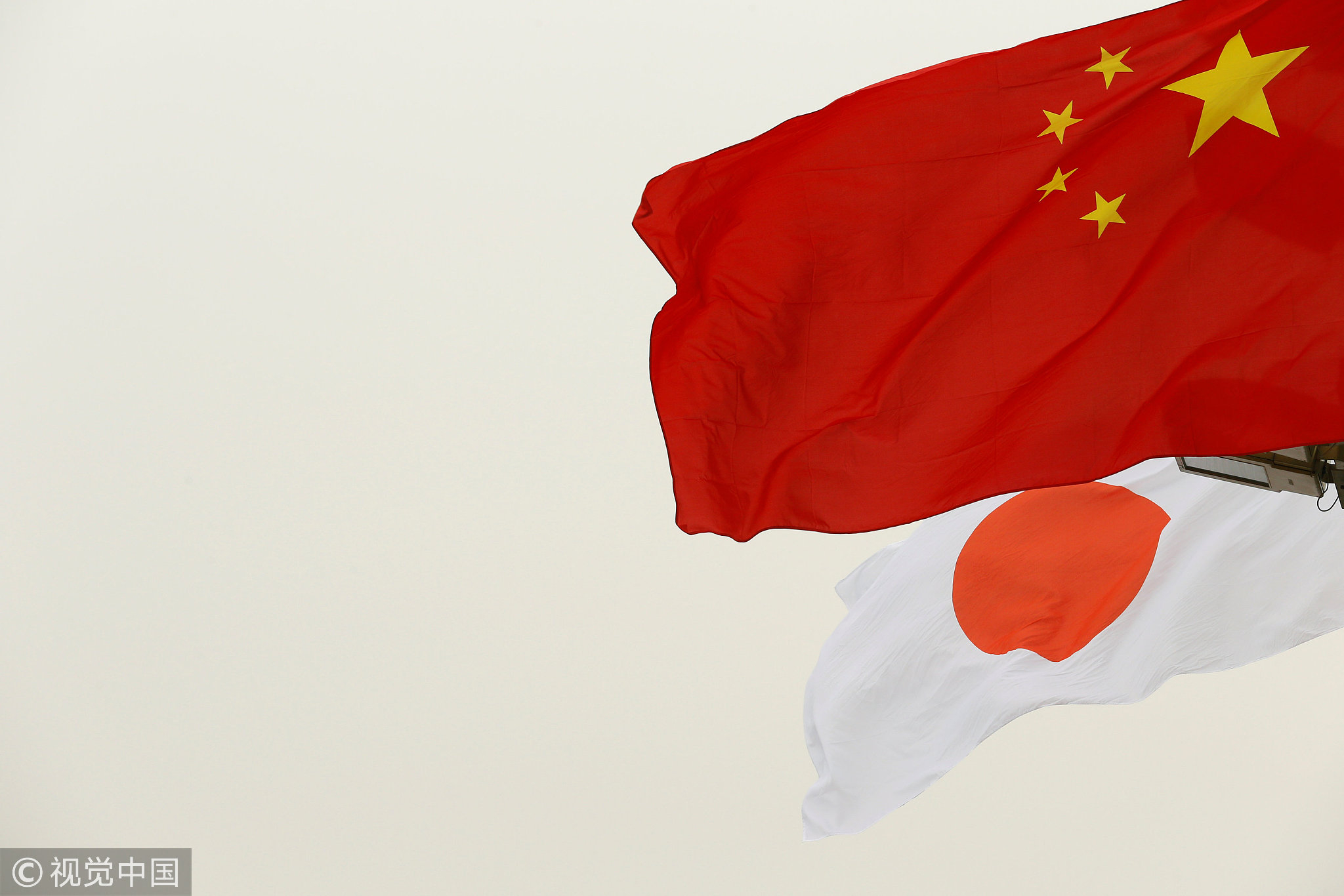 But when the Japanese government pushed forward with the plan to nationalize Diaoyu Island, the relationship began to cool down both politically and economically. On regional and global issues, the two would generally confront, rather than cooperate with, each other.
On China's proposals such as the Belt and Road Initiative (BRI) and the Asian Infrastructure Investment Bank (AIIB), Japan, a near neighbor which has more stake in these projects compared with those distant European nations, showed little interest. Instead, it expressed much more concern.
On the other hand, Japan spared no effort in advancing the TPP framework, which, in some sense, is perceived to keep China down. During this time period, China surpassed Japan to become the world's second-largest economy.
Sino-Japanese relations showed signs of revival after Japan's gradual adjustment to this new reality. On May 2017, Toshihiro Nikai, secretary-general of the Liberal Democratic Party (LDP) in Japan, led a delegation to Beijing to attend the Belt and Road Forum for International Cooperation.
He forwarded Abe's letter to President Xi. After that, China and Japan interacted more, economically and politically. Japan became more active and clear about the Belt and Road Initiative. 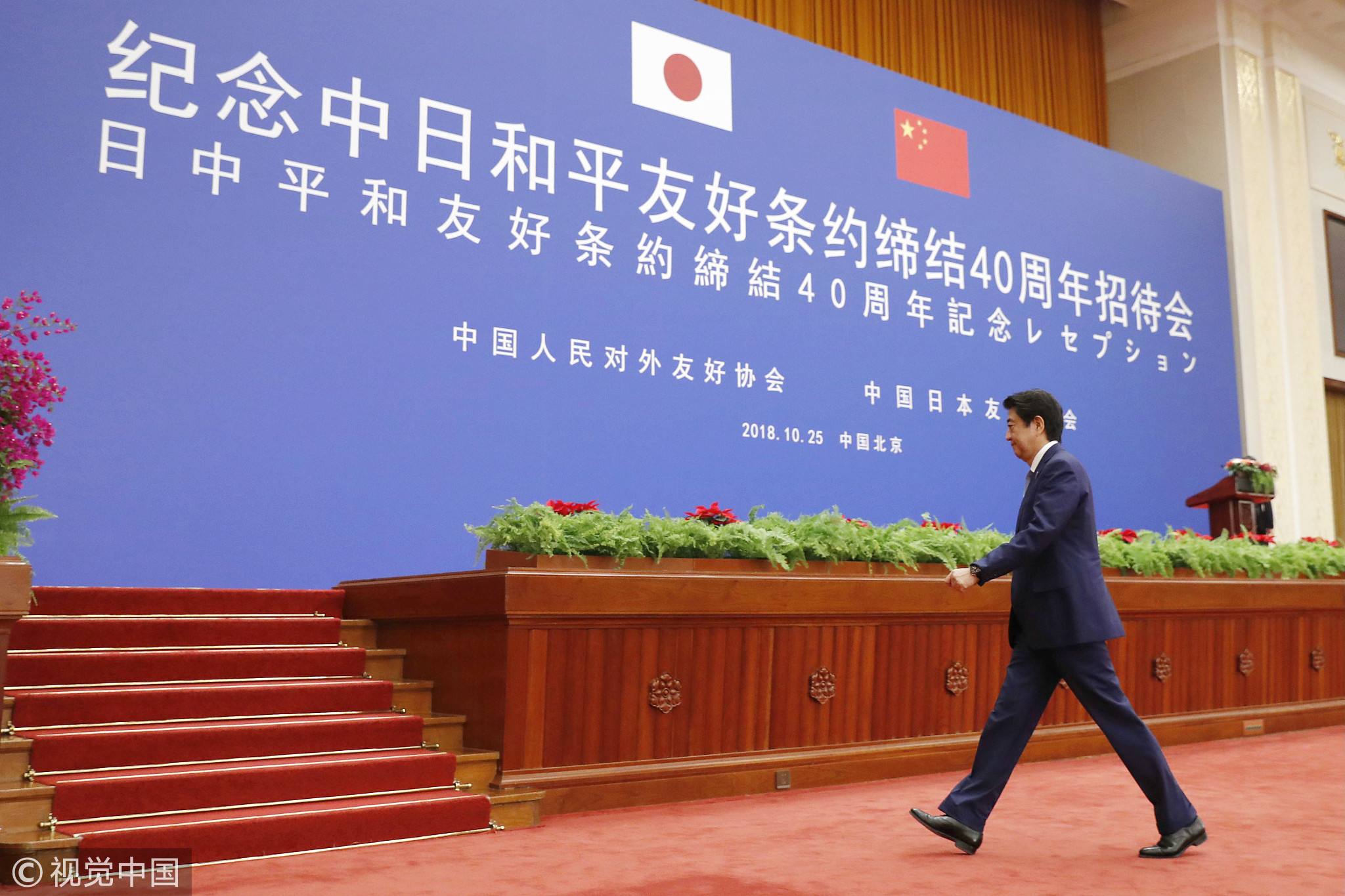 Japanese Prime Minister Shinzo Abe walks to the stage to deliver a speech at the Great Hall of the People in Beijing, China, October 25, 2018. / VCG Photo

Japanese Prime Minister Shinzo Abe walks to the stage to deliver a speech at the Great Hall of the People in Beijing, China, October 25, 2018. / VCG Photo

Through years of ups and downs, it's clear that leaders from both countries have a vision about the bilateral relations.
But faced with old problems like land disputes that still require a solution, fresh strategic interests and new external environments brought about by changed global landscape, China and Japan are navigating their way to a new balance.
After winning his third term in the general election in LDP in Japan, Shinzo Abe's most important mission is to modify the constitution so that Japan would make one important step closer towards a normal state.
This would also leave an important political legacy for him. The difference between China and Japan in this regard is not about the goal, but about how to lay a political foundation to achieve the goal. Strengthened coordination is required on the top level to ensure that core mutual interests are looked after.
Regionally speaking, the East China Sea is in a stable condition. The stalemate in the peace process of the Korean Peninsula shows signs of breakthrough. With a highly anticipated Asian era, dynamic East Asian economic integration may enjoy an unprecedented cheerful outlook. 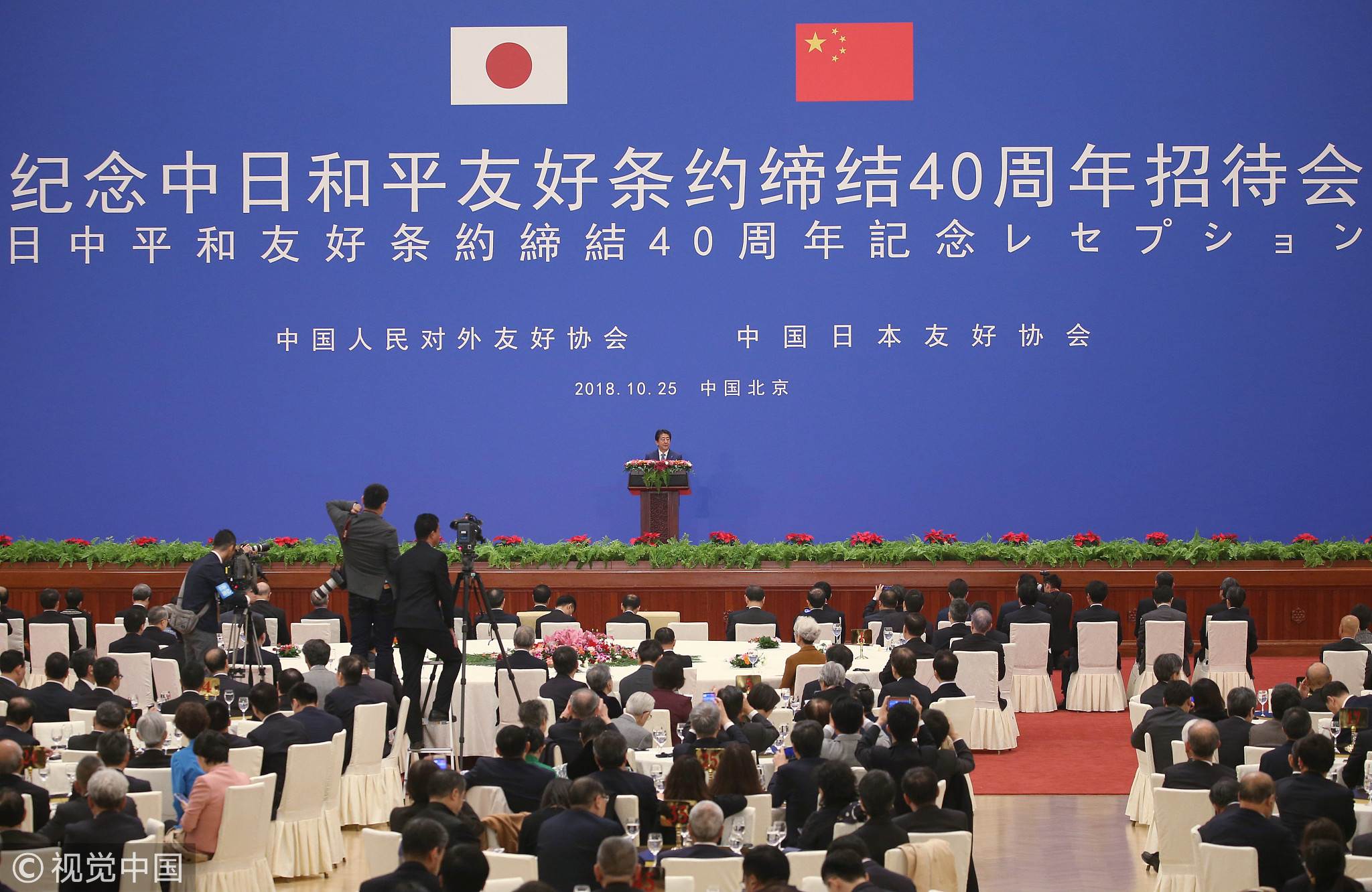 Japanese Prime Minister Shinzo Abe (center) delivers a speech at a reception to celebrate the 40th anniversary of the signing of the China-Japan Peace and Friendship Treaty in Beijing, China, October 25, 2018. / VCG Photo

Japanese Prime Minister Shinzo Abe (center) delivers a speech at a reception to celebrate the 40th anniversary of the signing of the China-Japan Peace and Friendship Treaty in Beijing, China, October 25, 2018. / VCG Photo

As the world's second and third largest economies, China and Japan share unshirkable responsibility in advancing that integration. This will help transform both economies strategically and expand the regional market.
Chinese and Japanese enterprises enjoy the huge potential of the huge market of infrastructure in Asia. This is not a zero-sum game where one wins while the other loses out.
The past year of the Trump presidency has seen America further on the road of trade bullying. It frequently wages war on trade. The US, a key factor in Sino-Japanese relations, shows increasing signs of uncertainty. This, to some extent, helps strengthen Sino-Japanese collaboration.
This year marks the 40th anniversary of China's reform and opening-up. Abe's visit also comes at the 40th anniversary of the signing of the Treaty of Peace and Friendship between the People's Republic of China and Japan. 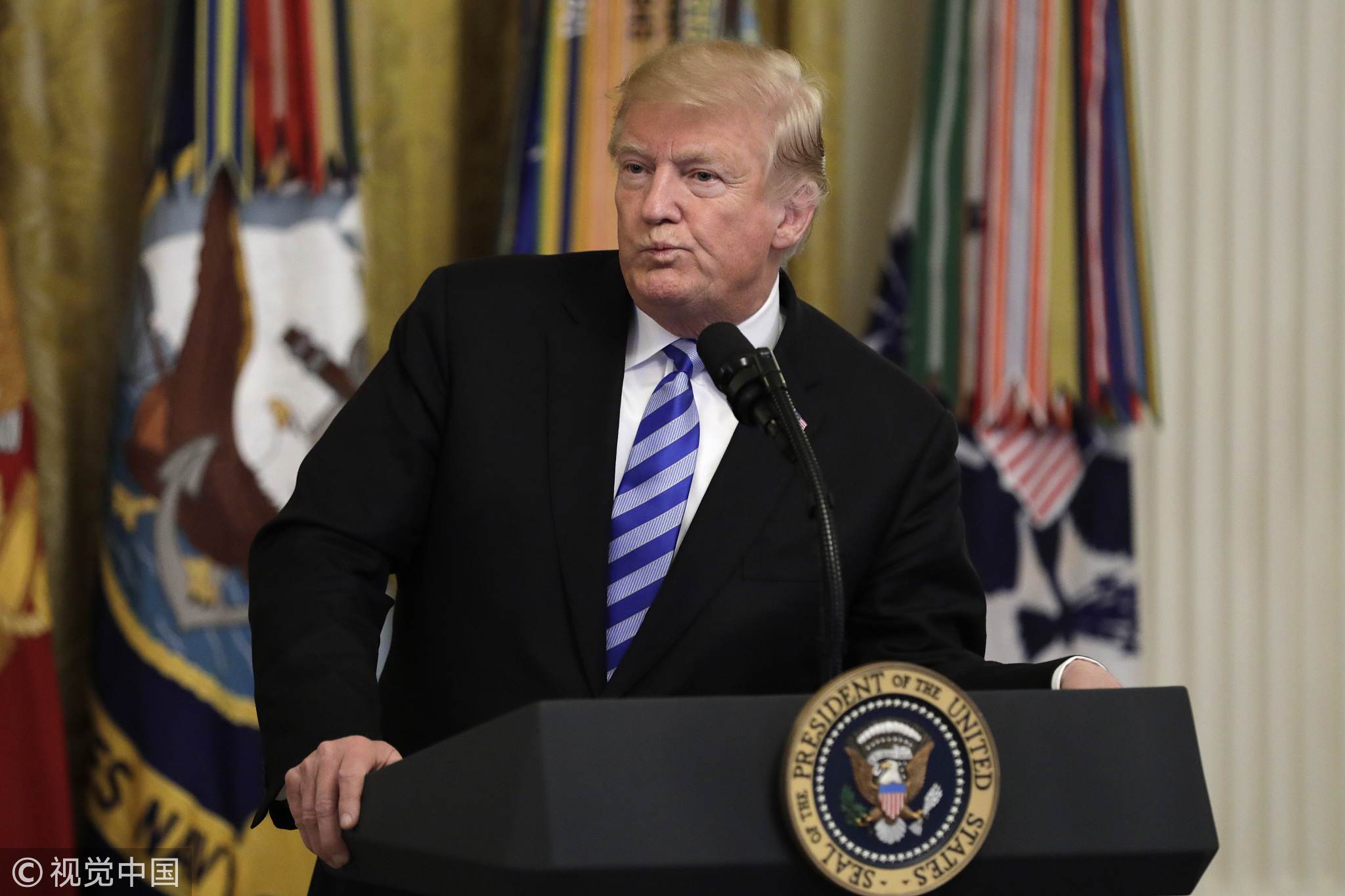 US President Donald Trump pauses as he delivers remarks during a reception commemorating the 35th anniversary of the attack on Beirut Barracks in the East Room of the White House in Washington, DC, US,  October 25, 2018. / VCG Photo

US President Donald Trump pauses as he delivers remarks during a reception commemorating the 35th anniversary of the attack on Beirut Barracks in the East Room of the White House in Washington, DC, US,  October 25, 2018. / VCG Photo

Chinese Premier Li Keqiang visited Japan in May this year. Abe's trip came five months after that. Leaders from China and Japan conducted mutual visits within a year.
This means the restart of the dialogue between leaders from both sides, which was shut down for many years. Also, it represents a significant signal and a meaning measure that China and Japan are ready to move bilateral relations on a normal track.
However, institutional differences and historical issues still stand in the way of normal Sino-Japanese relations.
Now, the two sides should find ways to maintain the current positive momentum and strengthen the weak foundation underlying the new balance between China and Japan so as to avoid excessive disturbances in the bilateral relations.
(If you want to contribute and have specific expertise, contact us at opinions@cgtn.com.)