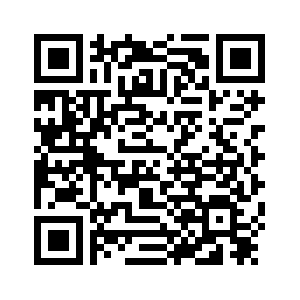 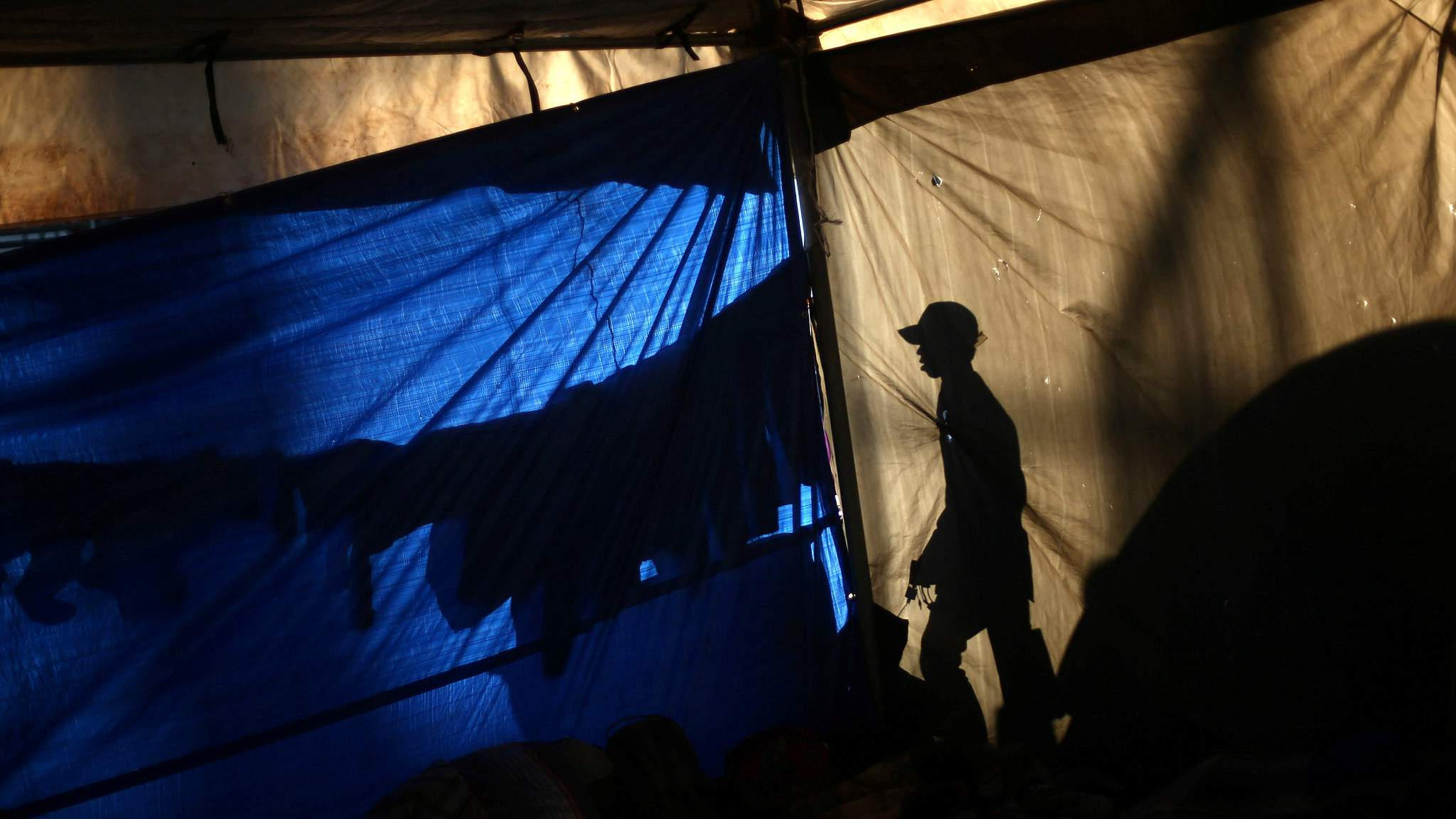 Editor's note: Dr.Yuan Sha is an assistant research fellow at the Department for American Studies at the China Institute of International Studies. The article reflects the author's opinion, and not necessarily the views of CGTN.
After months of arduous trekking, the "caravan" migrants from Central America finally made it to the U.S.-Mexico border. The migrant crisis is quickly turning into border clashes. Such escalated tension would lend new fodder for Trump to further tighten the immigration policy.
Legal challenges
As thousands of caravan migrants arrive at the U.S.-Mexican border, U.S. border enforcement officers and over 5,800 U.S. troops stand on high alert. Last Sunday, 500 migrants attempted to break through San Ysidro port of entry between San Diego, California, and Tijuana, Mexico. The encounter quickly turned into a direct clash, when border enforcement officers used tear gas to disperse the migrants who threw rocks and bottles at them. Hence, the port was temporarily closed. This is a rare move, and how the U.S. plans to respond to a potential influx of migrants raises concerns. 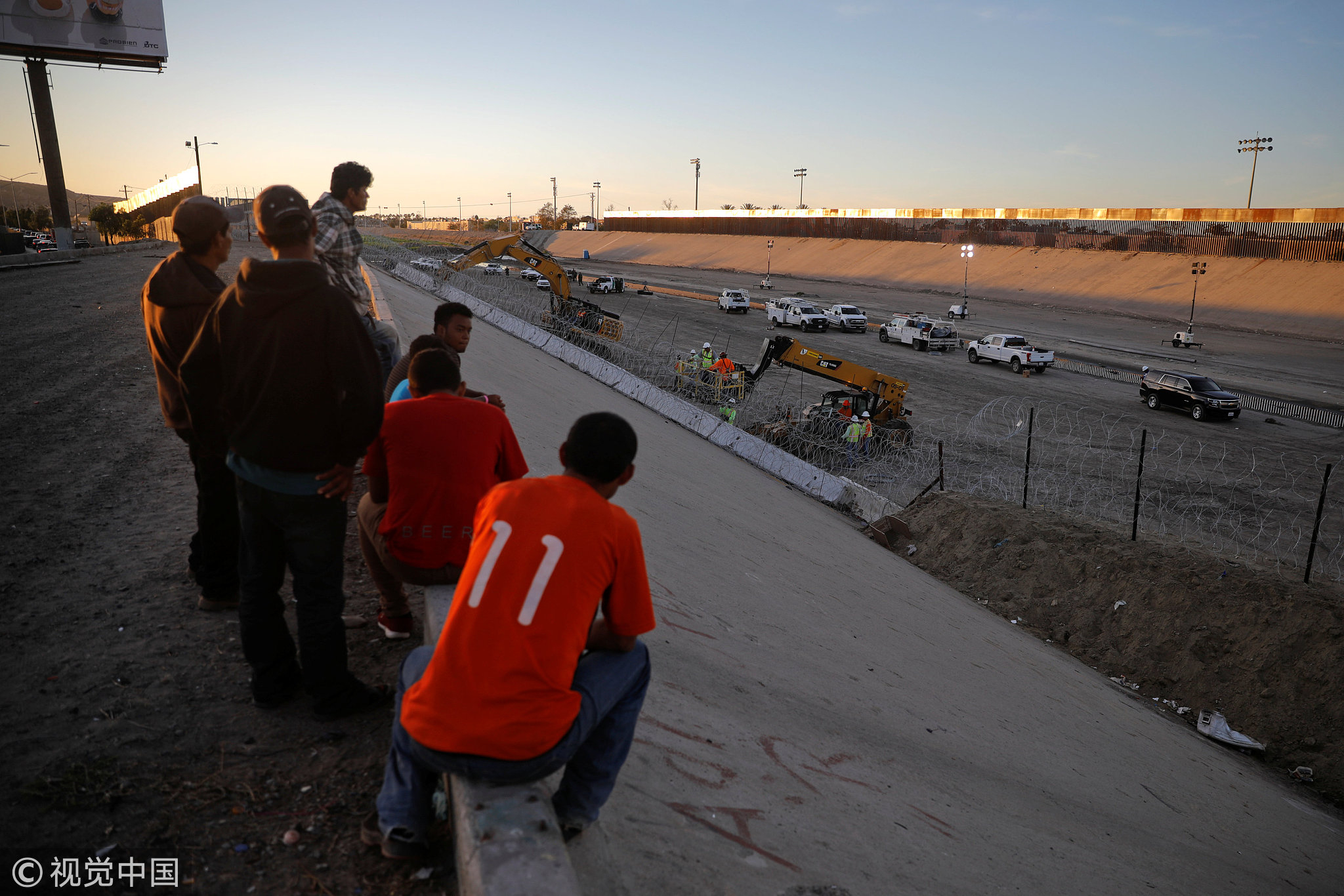 Migrants watch workers set up concertina wire on the border between Mexico and the U.S. on Tijuana River, Tijuana, Mexico, November 26, 2018. /VCG Photo

Migrants watch workers set up concertina wire on the border between Mexico and the U.S. on Tijuana River, Tijuana, Mexico, November 26, 2018. /VCG Photo

Last week, U.S. President Trump signed a memorandum, giving the military a new authority to conduct "crowd control, temporary detention and cursory search," as well as to "show or use of force" in order to protect the safety of border enforcement personnel. He further elaborated at the Mar-a-Lago resort that he had "given the ok" to the military to use "lethal force" against illegal immigrants "if they have to," and said "I have no choice," because "you're dealing with a minimum of 500 serious criminals."
This new authority raises yet another legal controversy. According to the Posse Comitatus Act, an active military is prohibited from engaging in law enforcement on U.S. soil. Unless the president declares "martial law," the military's role would be limited. U.S. Defense Secretary James Mattis reiterated that Customs and Border Protection would be responsible for the entire immigration enforcement job, and the military has no authority to arrest immigrants. White House chief of staff John Kelly and Homeland security secretary Kirstjen Nielsen vocally doubted this decision's constitutionality.
But after the mid-term election, Trump stepped up efforts to close ranks inside his cabinet, and there are rumors about firing Kelly and Nielsen. Considering the final approval of the revised travel ban and the successful nomination of Neil Gorsuch and Brett Kavanaugh to the Supreme Court, it would not be entirely outrageous to think of a conservative-leaning Supreme Court to give this order a pass. But Trump's unprecedented move did raise legitimate concerns of abuse of presidential power. 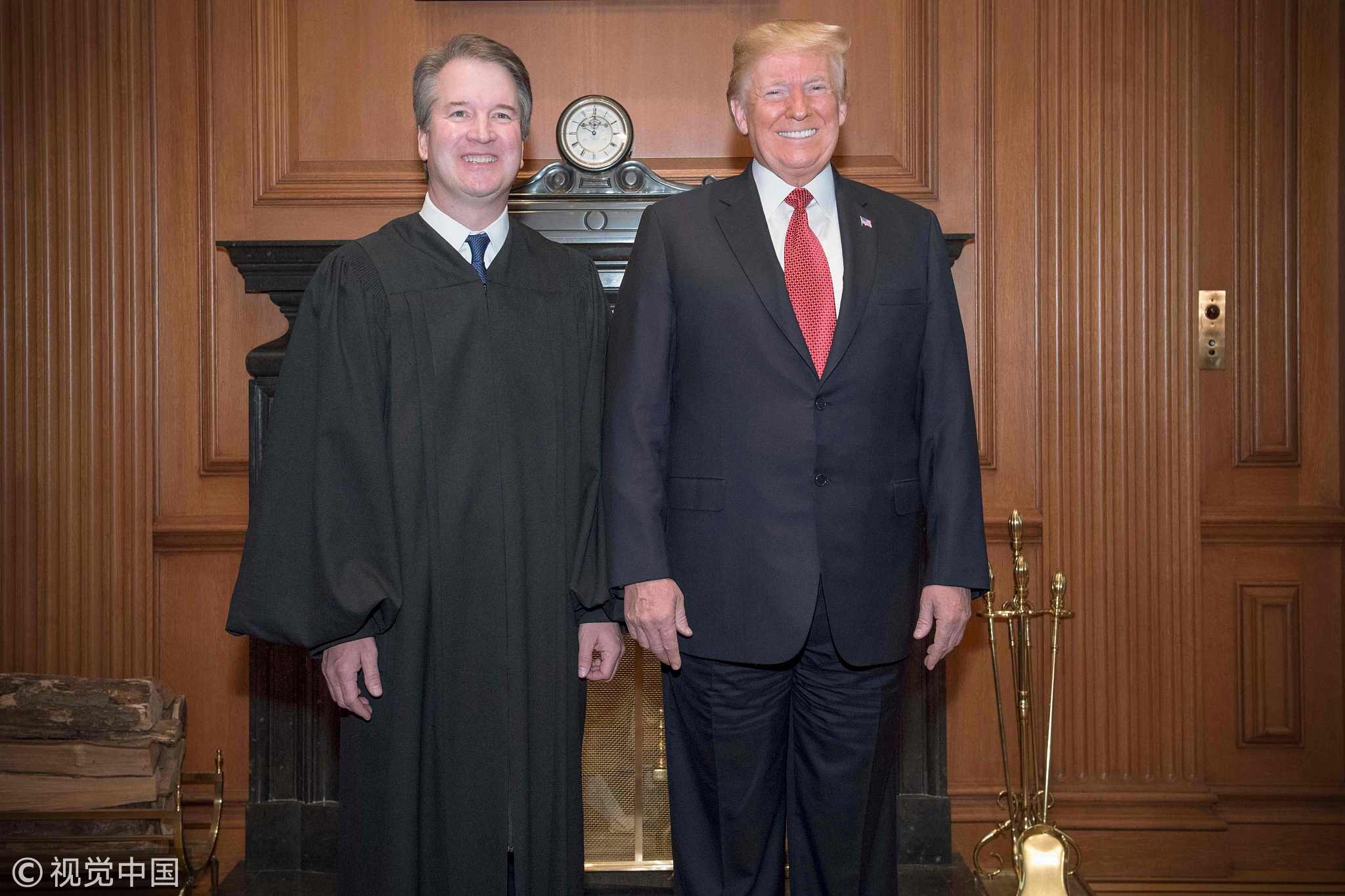 New fodder for political attacks
Trump has been playing the immigration card since taking office, and he hyped the caravan "invasion" right before the mid-term election. The heightened tension at the border rekindled his politically-charged rhetoric on this topic, and he must feel vindicated by the latest border clash.
He hijacked the Thanksgiving speech when he expressed thanks to troops at the border while lambasting at the Democrats. He blamed the migrant crisis on the Democrats and their wishful thinking on "open border." He also stoked fears about the migrants by exclaiming "we're not letting criminals into our country." Traditionally, presidents' Thanksgiving speeches are about thanks, unity, and non-partisanship. After all, this festival tells a story about a migrant ship named Mayflower.
He dismissed the federal judge who issued a temporary restraining order on his asylum restriction as an "Obama judge" and called the ninth circuit a "big thorn in our side." Trump then mounted relentless attacks on chief justice John Roberts when he tried to defend the independence of the judiciary. Trump's politically-charged rhetoric against federal judges has crossed the red-line.
He is also pressuring the House of Representatives, where the Democrats hold the majority, to agree to his demand for a five-billion-US-dollar border wall by threatening a government shutdown. But Democrats would not let him go lightly and might push for the Mueller investigation and other Republican concessions.
An unlikely partner
The U.S. also needs cooperation with its southern neighbor to address this migrant crisis. Trump has been engaging in a pressure campaign on Mexico. He threatened to close the U.S.-Mexico border to stop the sale of Mexican cars in the U.S. 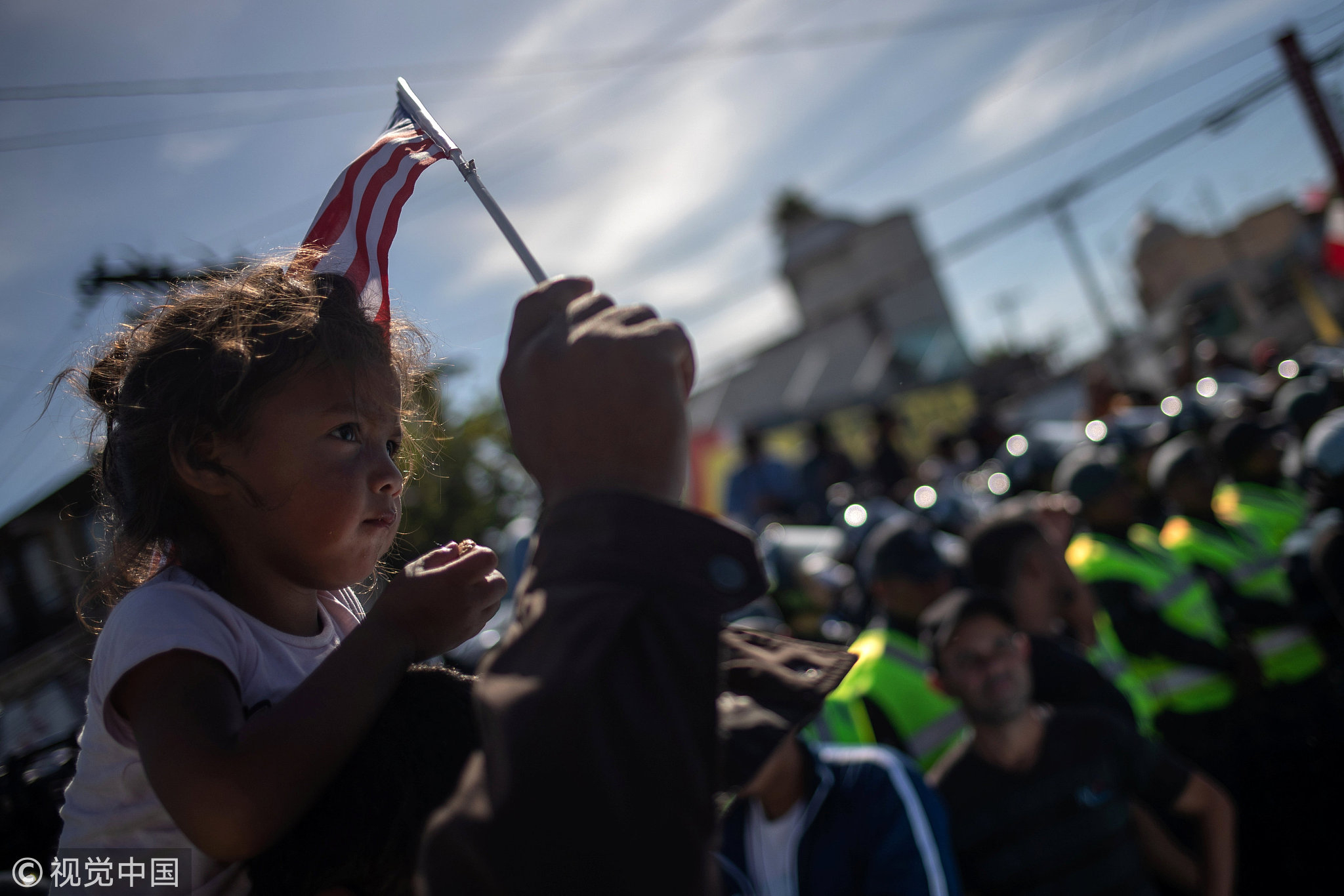 A migrant girl sits on top of her father as they are surrounded by policemen while marching toward the U.S. border with Mexico in Tijuana, Mexico, November 25, 2018. /VCG Photo

A migrant girl sits on top of her father as they are surrounded by policemen while marching toward the U.S. border with Mexico in Tijuana, Mexico, November 25, 2018. /VCG Photo

White House is also considering a plan to request Central American migrants to remain in Mexico if they do not have "credible fear" of persecution there. This is also intended to exert greater pressure on Mexico. The Washington Post reported that Mexico's incoming President Andrés Manuel López Obrador would be willing to cooperate with the U.S. on this matter. But the report was later refuted by the Mexican government who renounced the intention of Mexico to become a "third safe country" for migrants.
As a matter of fact, the U.S. and Mexican governments have been engaged in secret negotiations on this issue. Mexico has already sent 11,000 migrants back to Central America since October. But due to limited law enforcement personnel and financial resources, the caravans are causing great strains on Mexico, especially in the port city Tijuana, where the Mexican law enforcement forces were overwhelmed by the migrants, giving rise to local protests and forcing its mayor to proclaim the city in a humanitarian crisis. It would not be an easy task for López Obrador, who ran on an anti-Trump populist campaign, to give in to Trump's pressure.
Now, Trump has entrapped himself into a "Catch 22" dilemma. If he gives in, a "moral hazard" would arise and encourage more migrants to venture into the U.S. but if he ups the ante or if the military uses "lethal force" on migrants, a humanitarian crisis would erupt. To be or not to be, that is the question.
(Cover photo: A Central American migrant inside a temporary shelter in Tijuana, Mexico, November 26, 2018. /VCG Photo)
(If you want to contribute and have specific expertise, contact us opinions@cgtn.com)