"What is a ritual?"
"It’s what makes one day different from the other days, one hour different from the other hours."
—The Little Prince
The Chinese Lunar New Year, also known as the Spring Festival, is the most important holiday in the Chinese calendar, just like Christmas in the western world.
Although the festival originated more than 4,000 years ago, the Chinese have inherited the ancient legacy and fittingly adapted it to suit the modern times. The annual festival is usually marked by honoring gods and ancestors, family reunions and praying for happiness and luck in the coming year.
Traditionally, the Spring Festival celebrations last for nearly a month, starting from the 23rd day of the 12th lunar month (La Yue or 腊月 in Chinese) until the Lantern Festival on the 15th day of the first lunar month (Zheng Yue or 正月 in Chinese).
However, in recent years, many Chinese complain that high-paced lifestyle has tarnished the “flavor” of the Spring Festival. The anticipation of returning home is mostly dampened by busy work schedules and travel arrangements, making the holidays a stressful activity to begin with.
Many young millennials even prefer imported holidays such as Christmas and Valentine’s Day over the Spring Festival, as they come with less baggage. Some experts argue that by giving up ancient rituals and customs, the traditional festival has lost its “sense of solemn.” 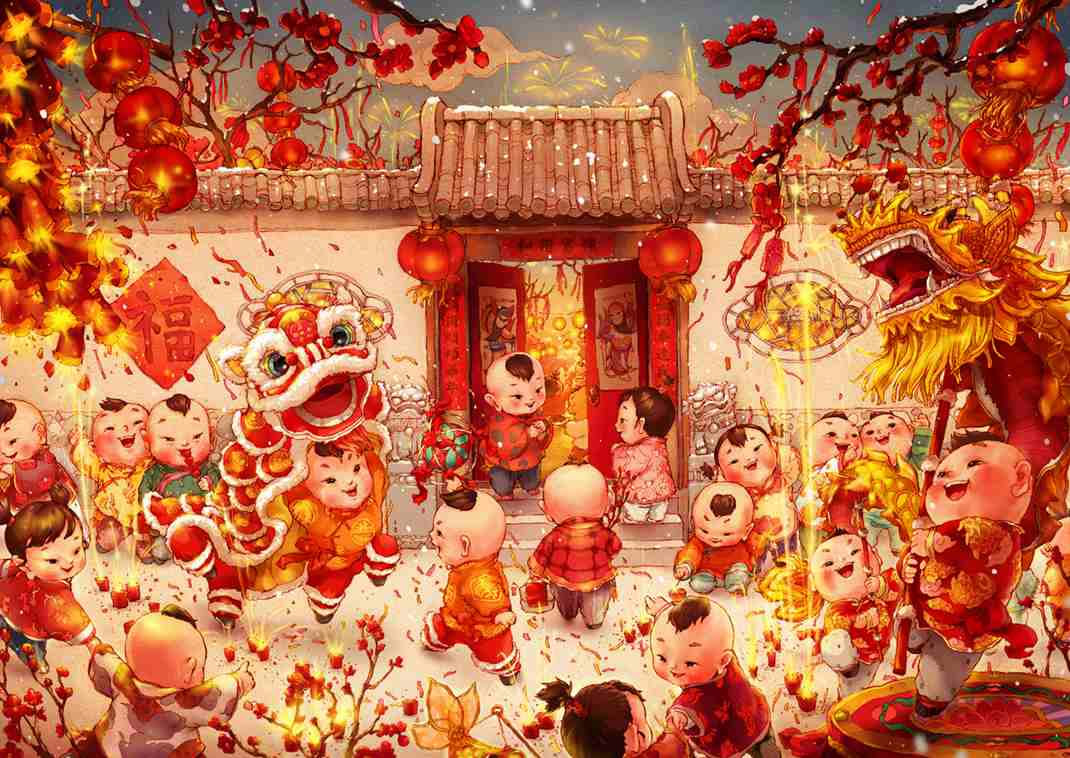 But as China is striving to revive its centuries-old traditional culture, an increasing number of people have been seeking to rediscover the myths and rituals of the Spring Festival to regain the significance of the traditions.
In 2017, the Chinese New Year falls on January 28, which will mark the Year of the Rooster, according to the Chinese zodiac sign. But in areas where the traditions are still well reserved and practiced, preparations for the New Year begin a week earlier, on January 20, which marks the Xiao Nian or the Minor New Year.
The 23rd Day of La Yue: Honoring the Kitchen God 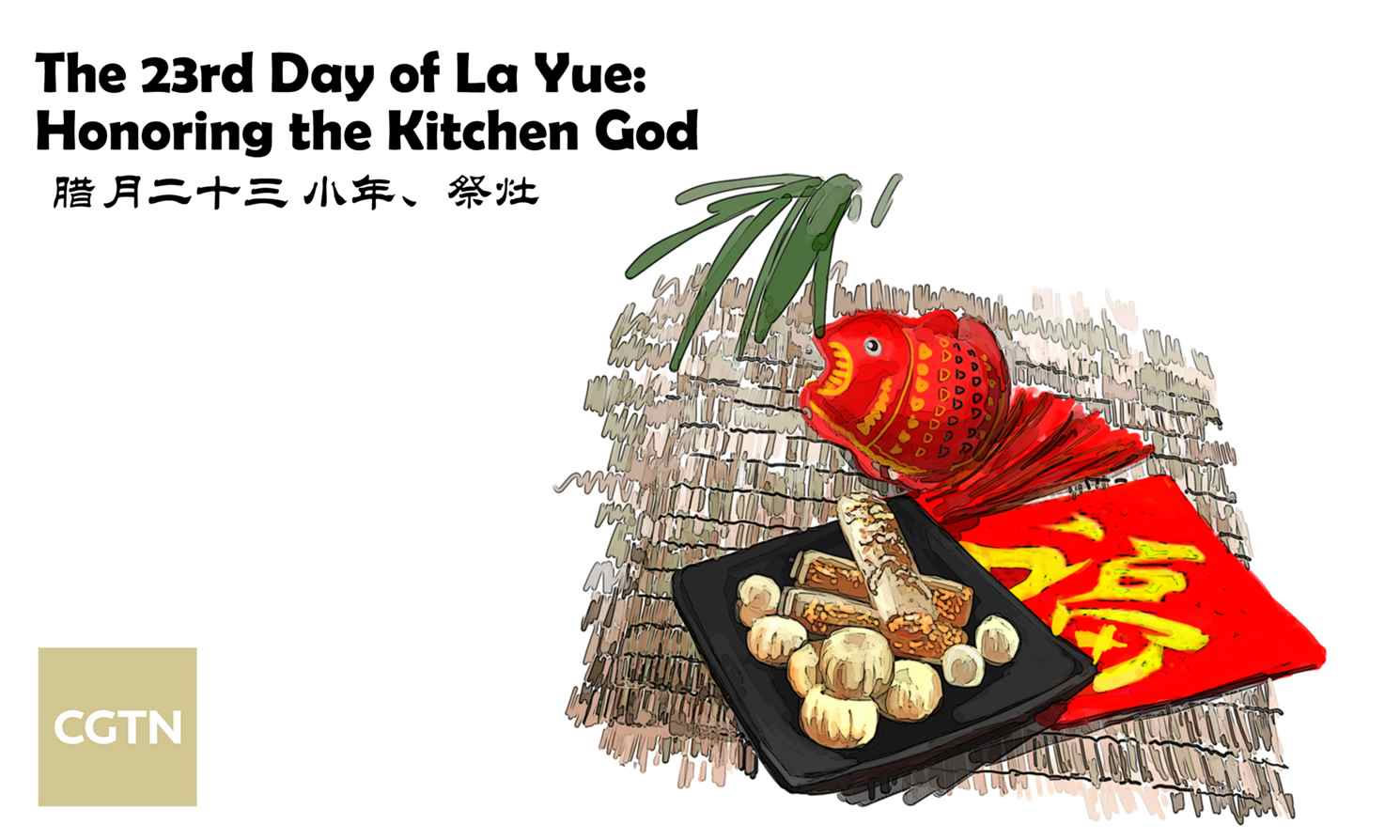 This day is also known as the day to honor the Kitchen God. According to Chinese Taoist mythology, the Kitchen God returns to heaven on this day to report to the Jade Emperor, God of Heaven, on the situation of every household during the past lunar year.
The Jade Emperor will then decide whether to bestow luck or punish on families. People will offer various foods, especially candies, to the Kitchen God to make sure that he won’t speak ill of their families. Many rural households in China still have paintings of the Kitchen God above their fireplaces.
The 24th Day of La Yue: Thorough Cleaning to the House 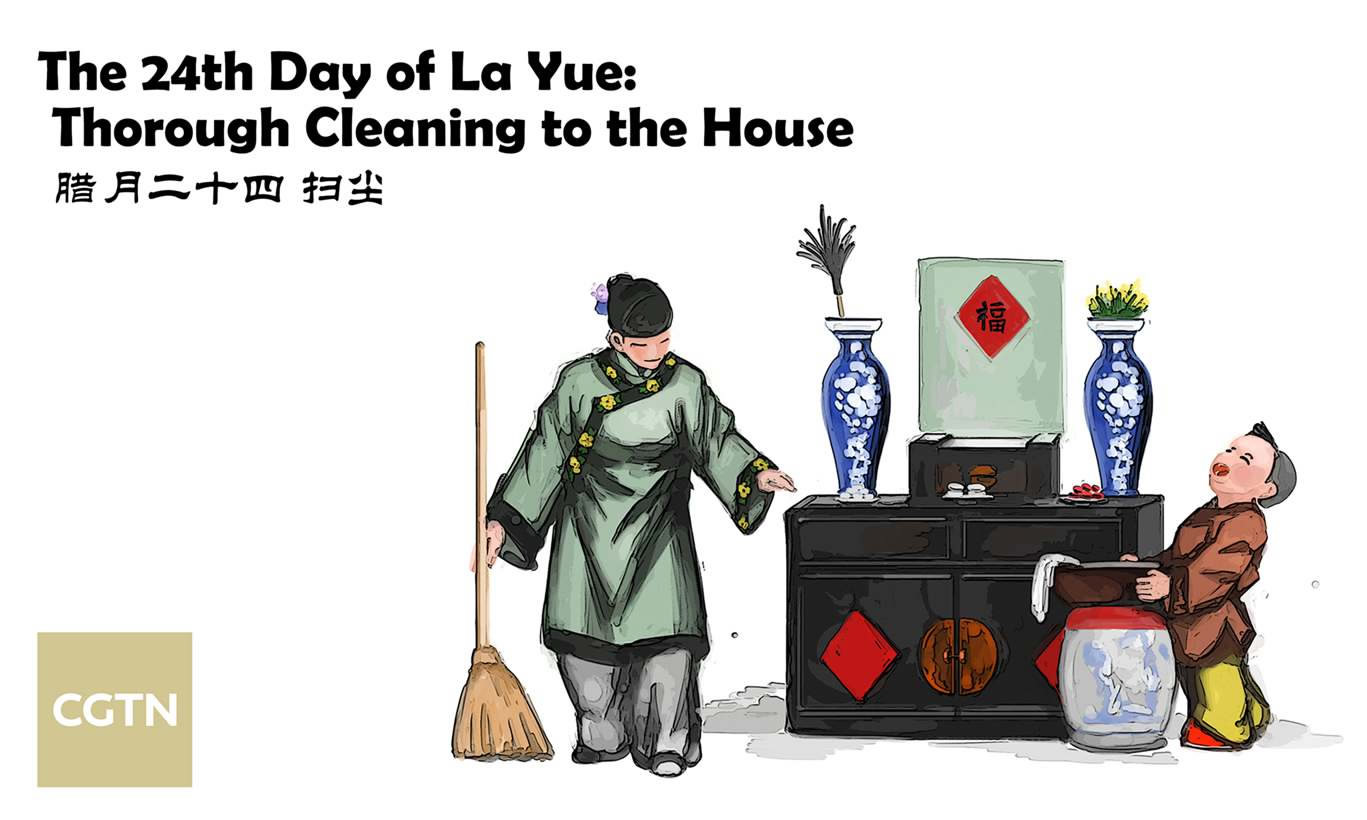 It is one of the most widely practiced Spring Festival traditions across China. In Chinese, the character for dust (尘) sounds like the character 陈, which means “the old.”
By giving the house a thorough cleanse on this day, Chinese people believe that this would rid them of their poverty and bad luck from the previous year, so as to welcome a prosperous new year.
The 25th Day of La Yue: Grinding Bean Curd (Tofu) 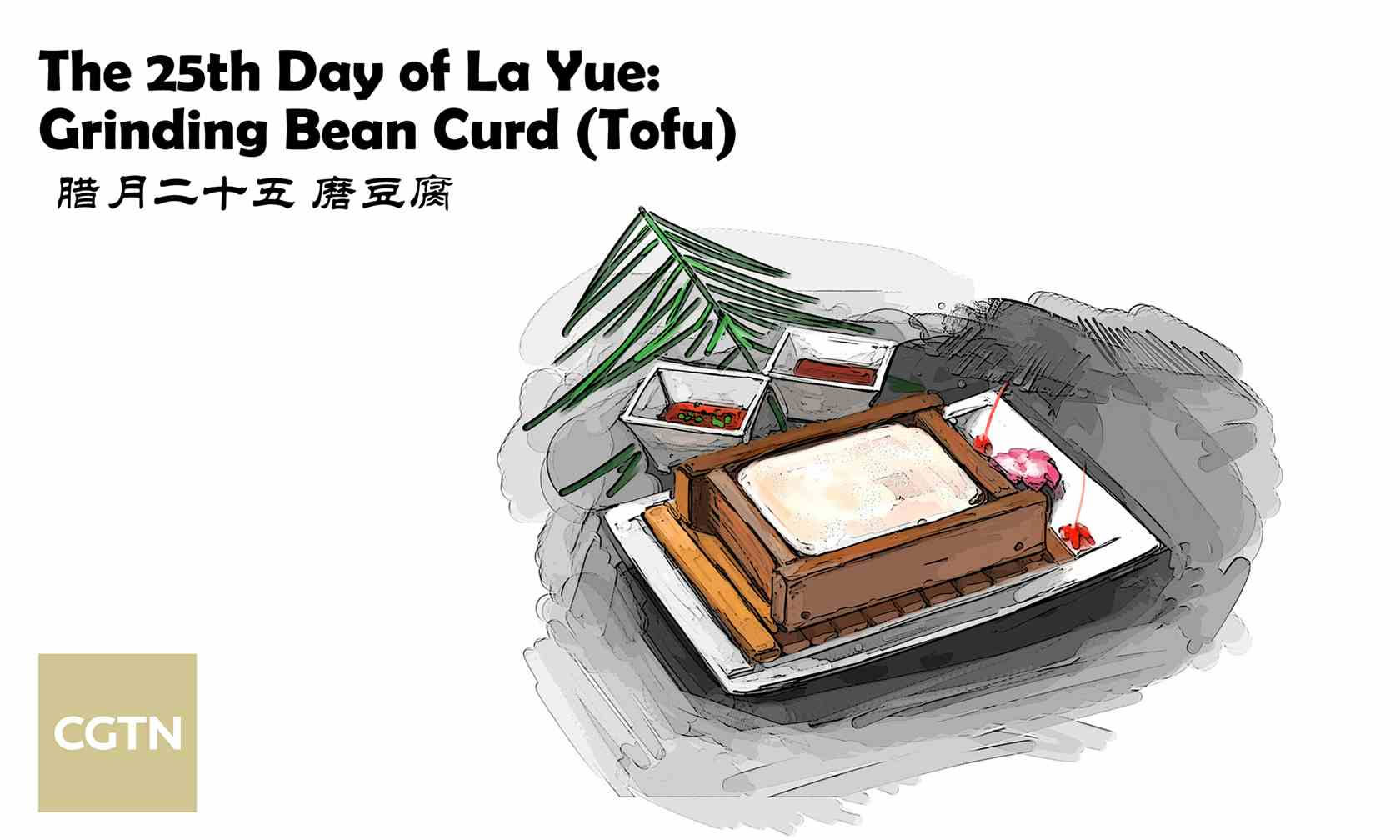 The tradition of grinding bean curd is also derived from Taoism. According to Taoist myths, the Jade Emperor would descend to earth to inspect people’s homes after receiving the Kitchen God’s report.
Most households prefer to eat bean curd to show how poor their lives are, so as to avoid potential punishment from the God of Heaven.
The 26th Day of La Yue: Buying Pork for the New Year 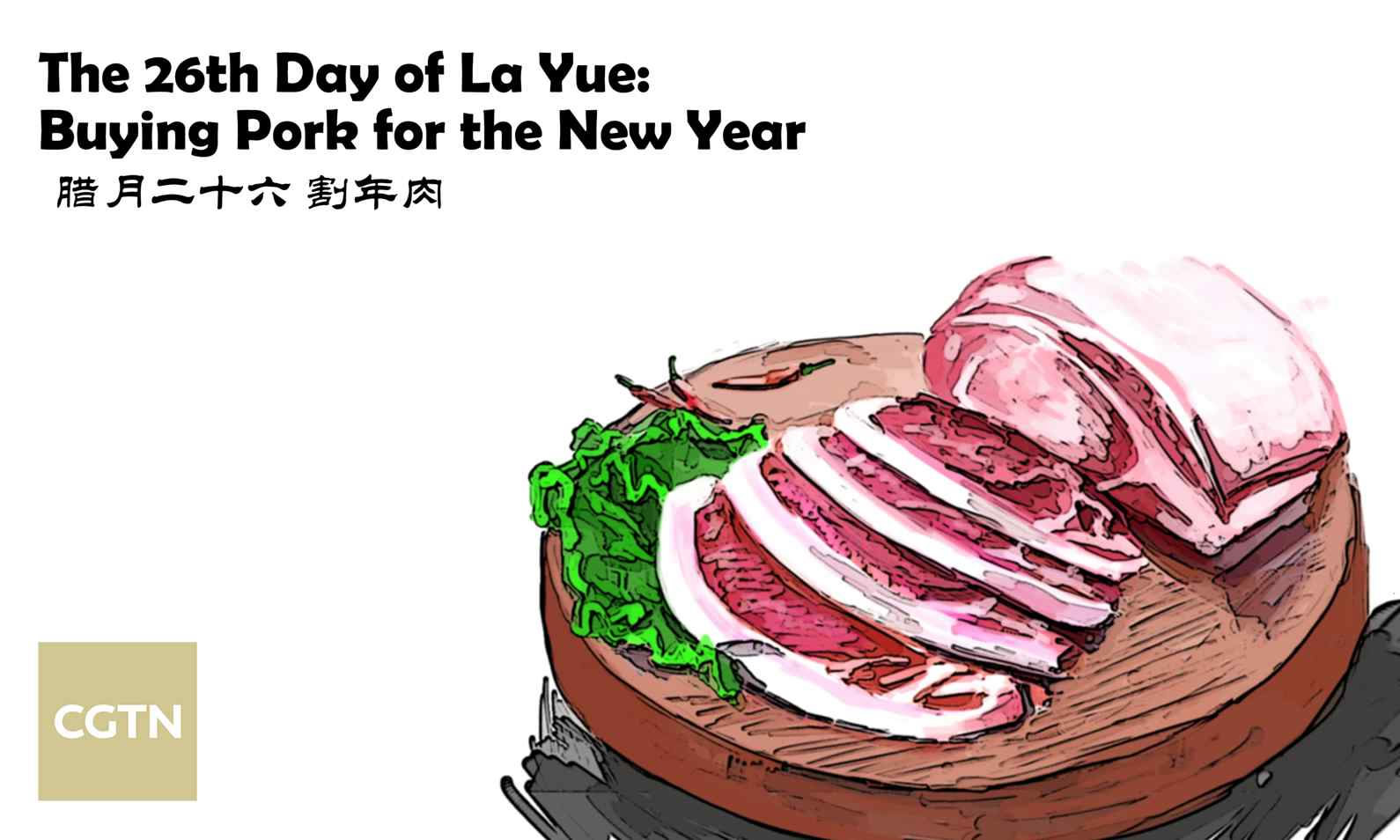 In the ancient days, people slaughtered pigs or bought pork on this day to prepare the main dish for Lunar New Year.
Ancient China was an agrarian society, and the living standards of people were below poverty line. Most families could afford to eat meat only during festivals, so buying pork for the Spring Festival was an event people anticipated. The ritual was even adopted into folk songs.
The 27th Day of La Yue: Killing the Chicken and Shopping for the New Year 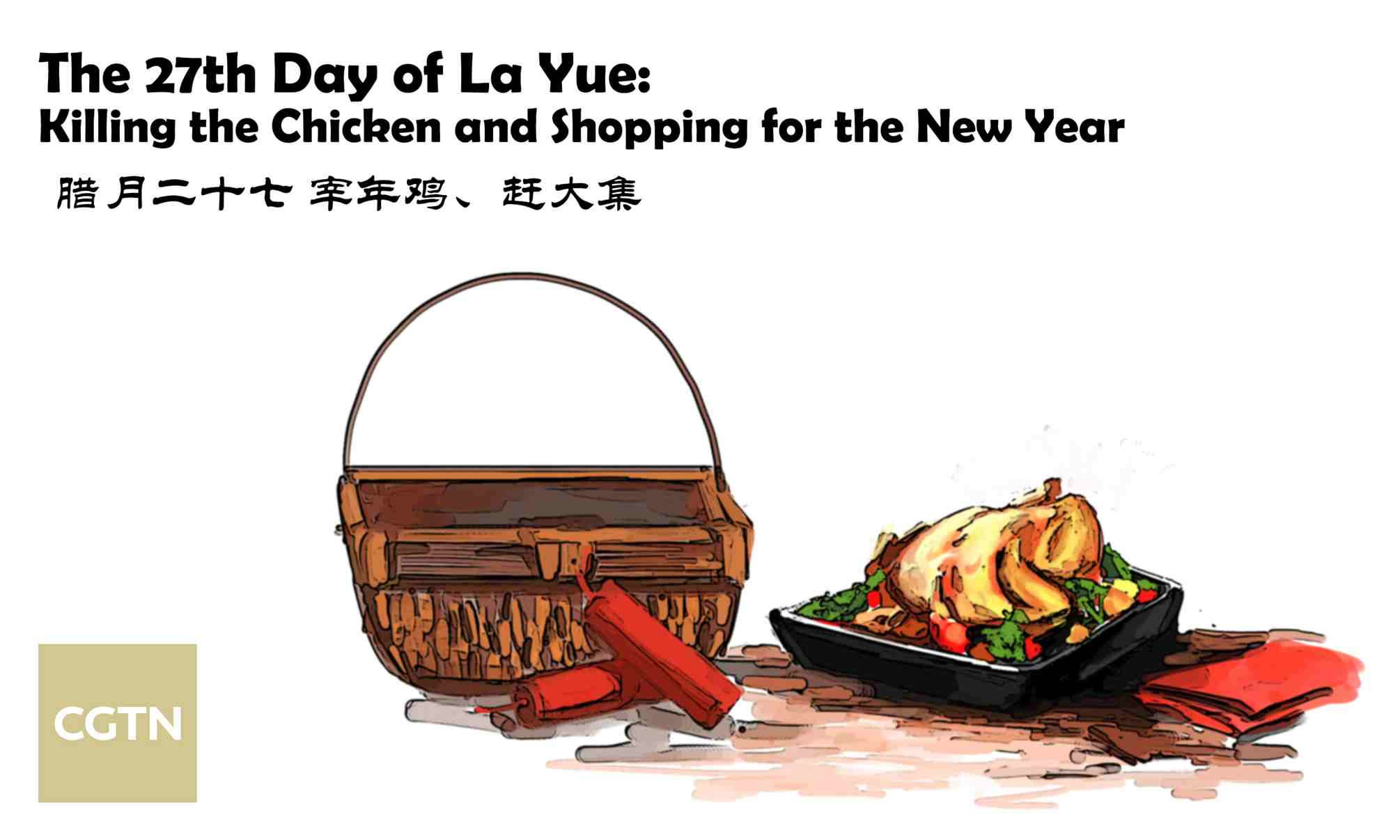 Besides killing self-raised poultry, the day is also characterized by shopping for the Spring Festival.
In some rural areas, outdoor markets, especially for the festival, are still organized for the shopping day. Nearly all the essential items for the festival can be found at the markets, including couplets, fireworks, paper cuts, incense and candles, food items and gifts.
Meanwhile, both the adults and children also take a bath to wash off diseases and untidiness on this day.
The 28th Day of La Yue: Putting on Couplets 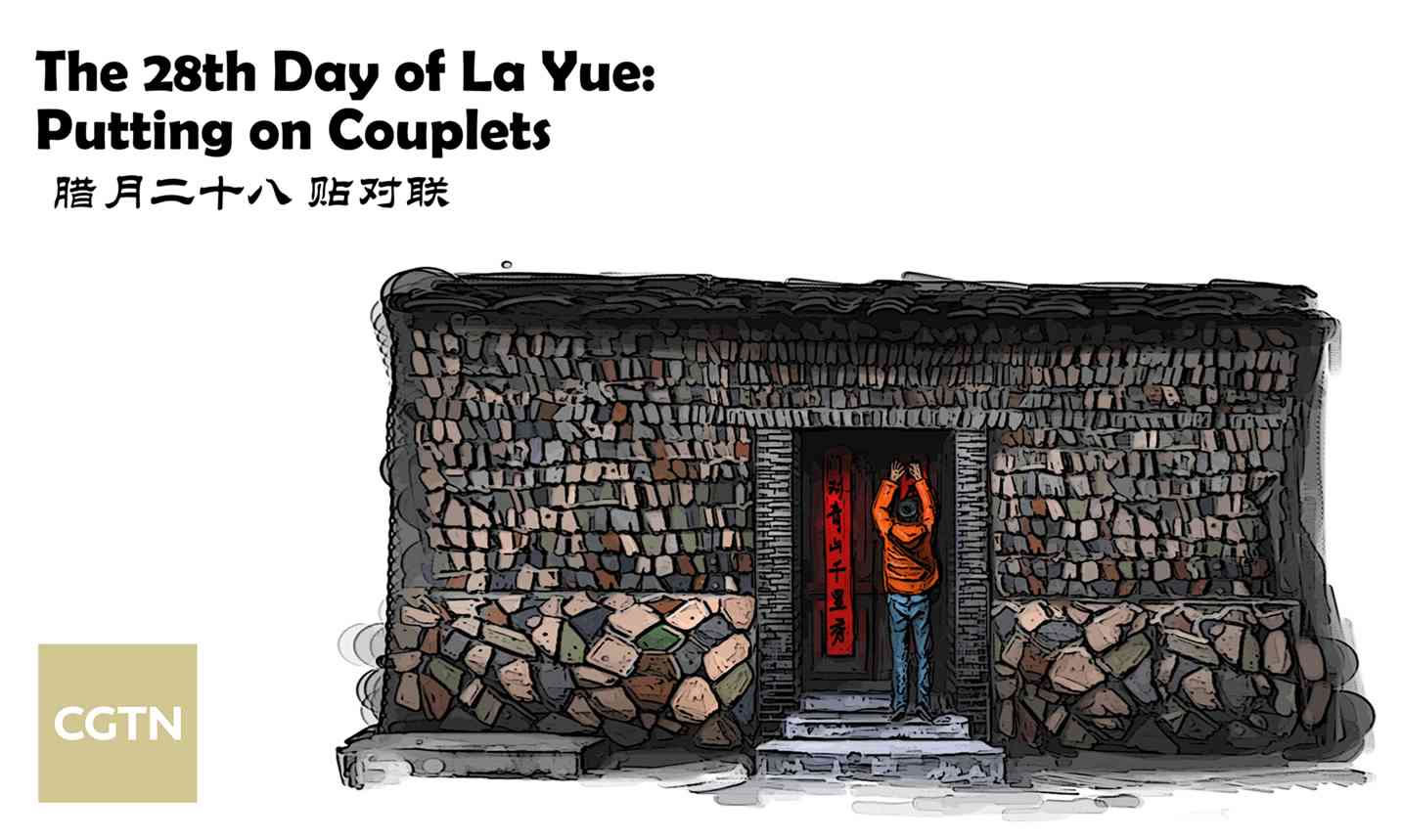 Days ahead of the Spring Festival, people start putting up decorations, which are a part of the festivities. They plaster their windows and doors with couplets and paper cuts embossed with the character for happiness(福) – it is one of the most important rituals which is indispensable even today.
The festival is also marked prominently in red. In Chinese folk stories, the Year (年) is believed to be a monster that unleased its terror on humans on the Spring Festival Eve. The monster, according to legends, was only scared by the red color and fireworks, and hence the traditions with prominent displays of red.
The 29th Day of La Yue: Honoring the Ancestors 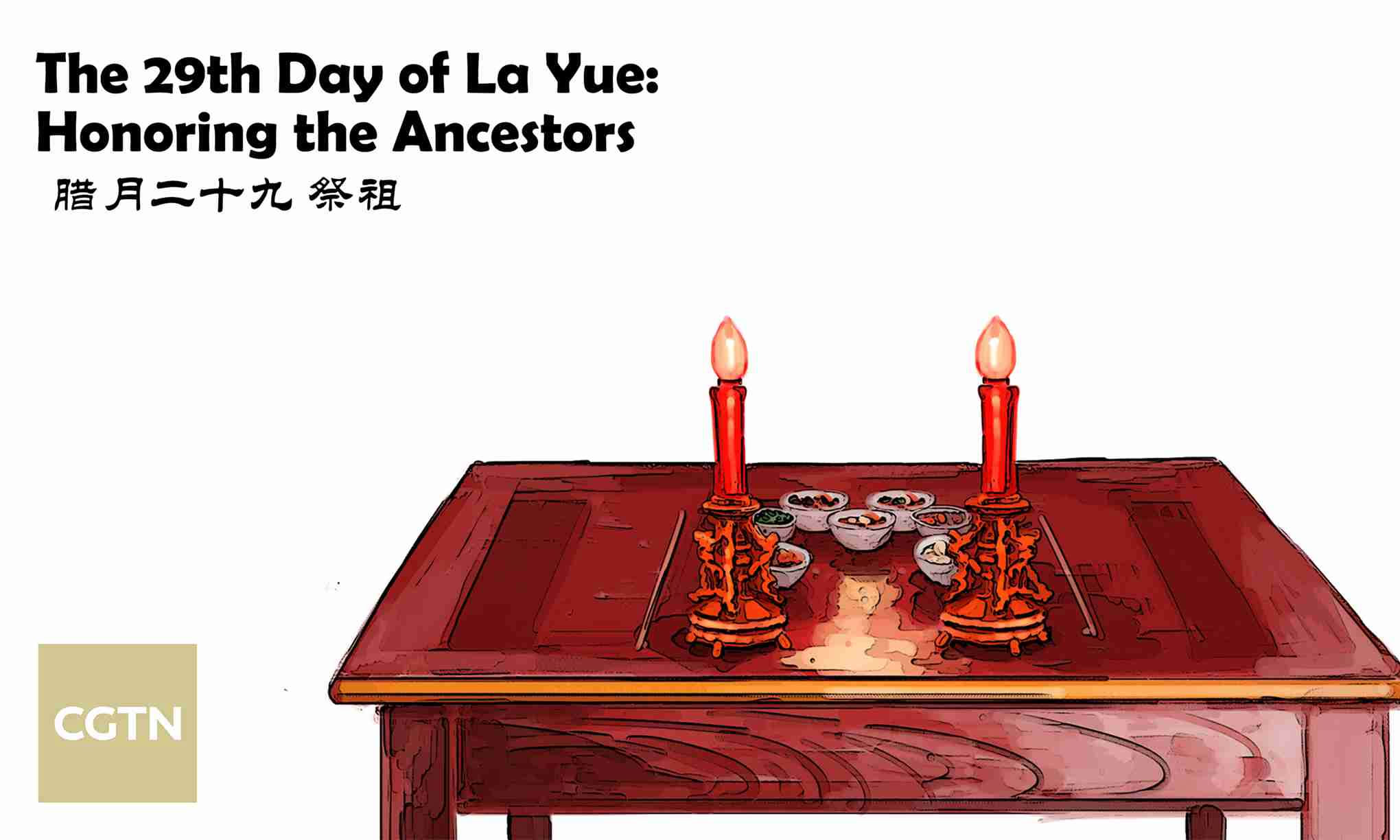 Two days before the Spring Festival, people sweep the tombs of their family members and burn incense and pilgrim papers in front of the tombstones. It’s a ritual which is believed to show respect to the ancestors and invite the souls of deceased to spend the New Year’s Eve.
As a nation that puts filial duty on top of all other virtues, worshiping ancestors has been treated as a totem for thousands of years. It is also the oldest ritual derived from the ancient days.
The 30th Day of La Yue: New Year’s Eve 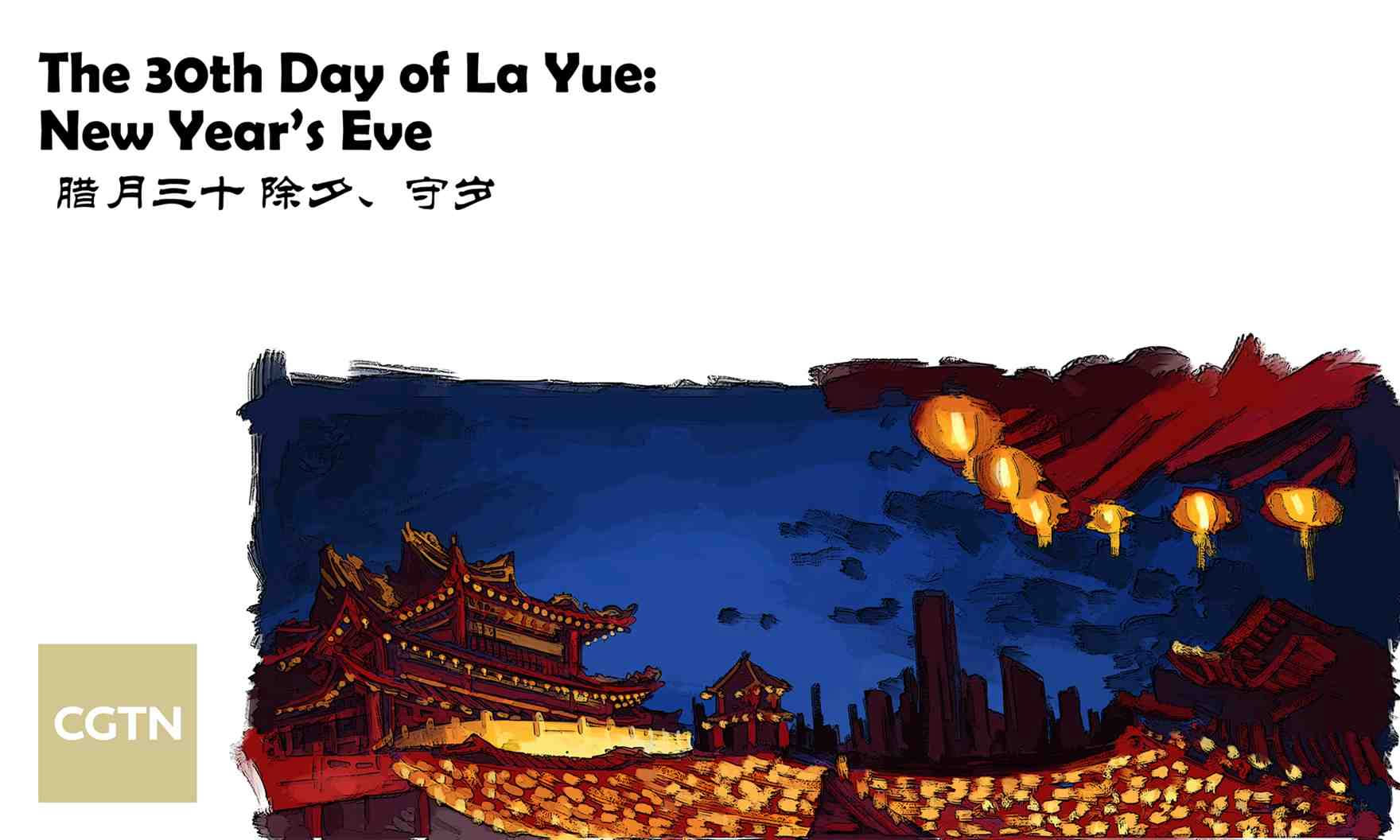 On the eve of the Spring Festival, family members gather for a big reunion after a year of separation – most people are away from home for either work or study.
The New Year’s feast is also an occasion many look forward to. Watching the Spring Festival Gala while enjoying home-cooked delicacies have been an annual ritual for many Chinese people – it’s a continuous feast of food, conversation and entertainment until they ring in the New Year at midnight. This is when the fireworks and exchange of celebratory messages are at peak.
The First Day of Zheng Yue: Early New Year Greetings 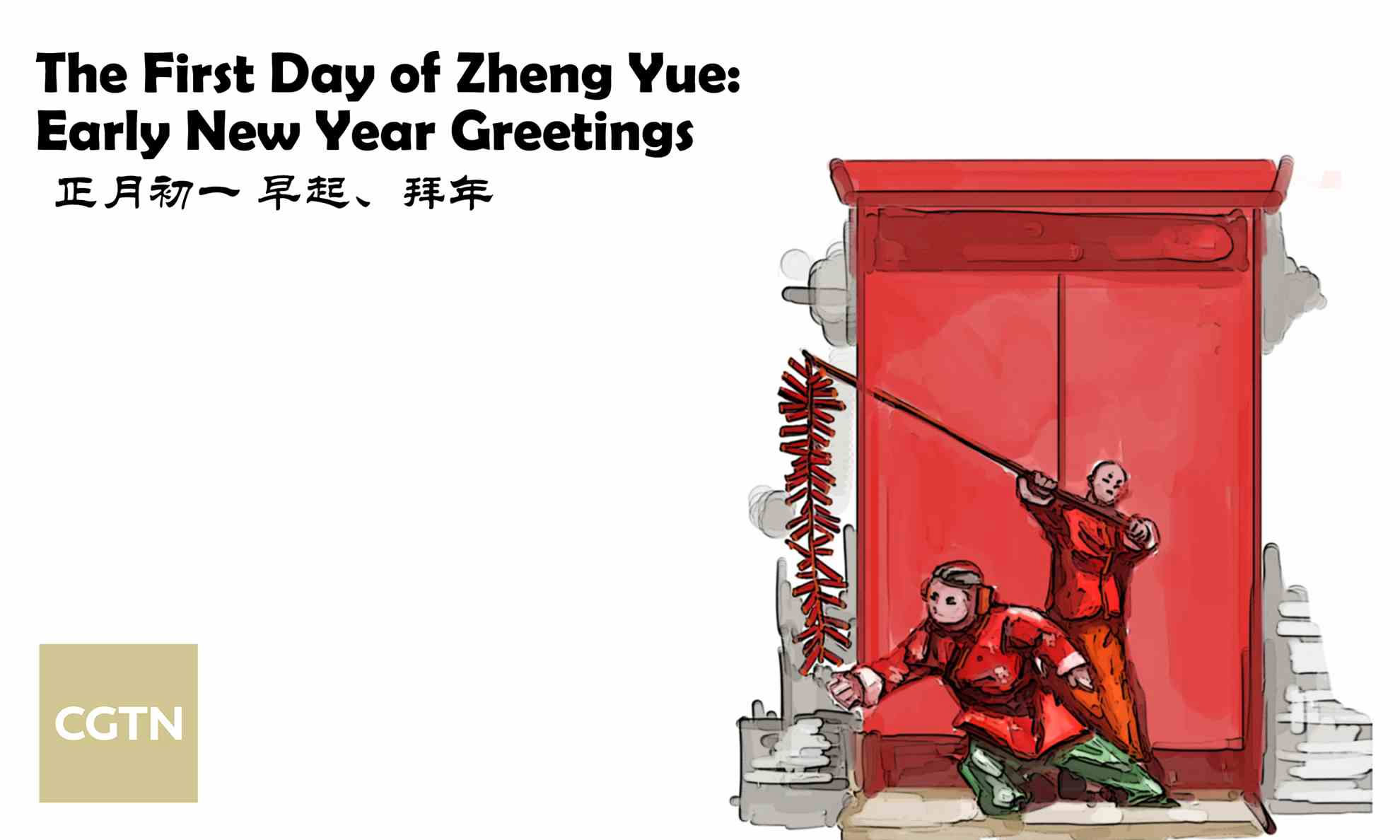 Getting up early on the morning of the first day of a lunar New Year is as conventional as staying up late the previous night. The mutual visits to relatives, friends and neighbors to meet and greet could last an entire day.
Each household prepares nut fruits and candies for the visiting guests, and the children are gifted with cash, popularly known as the “red envelope.” Needless to say, it is the most desired gift by the kids from elders.
The Lunar New Year’s Day is far from the end of the Spring Festival’s celebrations though. Each day, there are special rituals with specific meanings, until the Lantern Festival on the 15th day of the first lunar month, which marks the official end of the festival.
The rituals, considered outdated by many, not only bear the cultural legacy of the nation, but also could help people find their lost sense of belongingness. Most importantly, it is the rituals that allow people to enrich their festive experience while getting to know their roots.
(Illustrations by Fu Lei)
Copyright © 2017