‍Guest commentary by Li Yong
While the banging of Trump’s protectionist drums during the campaign trail still echo, there are other noisy speculations about the coming trade war between China and the United States, which has been seen as Trump’s effort to rescue America's lost jobs and part of his strategy to “Make America Great Again”. Some people have started to paint the picture of trade war, calculating the alternative degree of damages of tariff imposition at the level of 45%, 15% or 10% on Chinese imports.
It does not sound logic and strategic, though, to rejuvenate a country’s economy by waging a trade war, particularly when everyone is living in an intertwined globe, where one is part of another.‍

Jack Ma (R), founder and executive chairman of Alibaba Group, and President-elect Donald Trump pose for the media after their meeting at Trump Tower January 9, 2017. / CFP Photo
Yes, the trade deficit the USA has with China looks like a fact that is hard to swallow. Over half a trillion dollars, which is what China is selling to the USA, is often interpreted in the negative context of computing trade deficits, which is often associated with the job loss in the USA. But the picture is not so frightening when those numbers are broken down to reveal that the components of China’s exports are not at all Chinese. “Made in China” consists of contents made in other countries, including those made in the USA. A recent Deutsche Bank analysis indicates that if foreign contents are factored in, China’s real share in the USA trade deficit will come down significantly, from nearly 50% to about 16%, which compares to 13% contributed by Japan and 11% by Germany. This analysis is done in the context of globalized supply chain, and supports the view of “made in the world” by WTO, who has stated, “ More and more products are “Made in the World” rather than “Made in the UK” or “Made in France”. The statistical bias created by attributing the full commercial value to the last country of origin can pervert the political debate on the origin of the imbalances and lead to misguided, and hence counter-productive, decisions”.
The WTO statement of “made in the world” reflects the reality of the globalized production chain, like it or not, and trade war based on politically-driven positions will not change the situation. The biggest categories of US exports are commercial aircraft, automobiles, and food, for example, and no one can imagine that those products are, or can be, made completely in America. Take Boeing as an example. A lot of major components are made in factories located in Tianjin, Chengdu, Xi’an and Shenyang, and exported to Boeing, who assembles them into airliners that Boeing will sell to the rest of the world, including China. A trade war will change the economics of the supply chain and hurt everyone in the chain.
Imports support jobs, in a magnitude of over 16 million, which was the conclusion of the research sponsored by Consumer Electronics Association, National Retail Federation, US Chamber of Commerce and American Apparel and Footwear Association in 2013. A study recently released by the International Trade Administration of the US Commerce Department reported that exports by the USA in goods and services created 11.5 million jobs in 2015. US exports to China contributed a fair share of 9% in goods and 6% in services, amounting to a total of 910,640 jobs, according to the study. 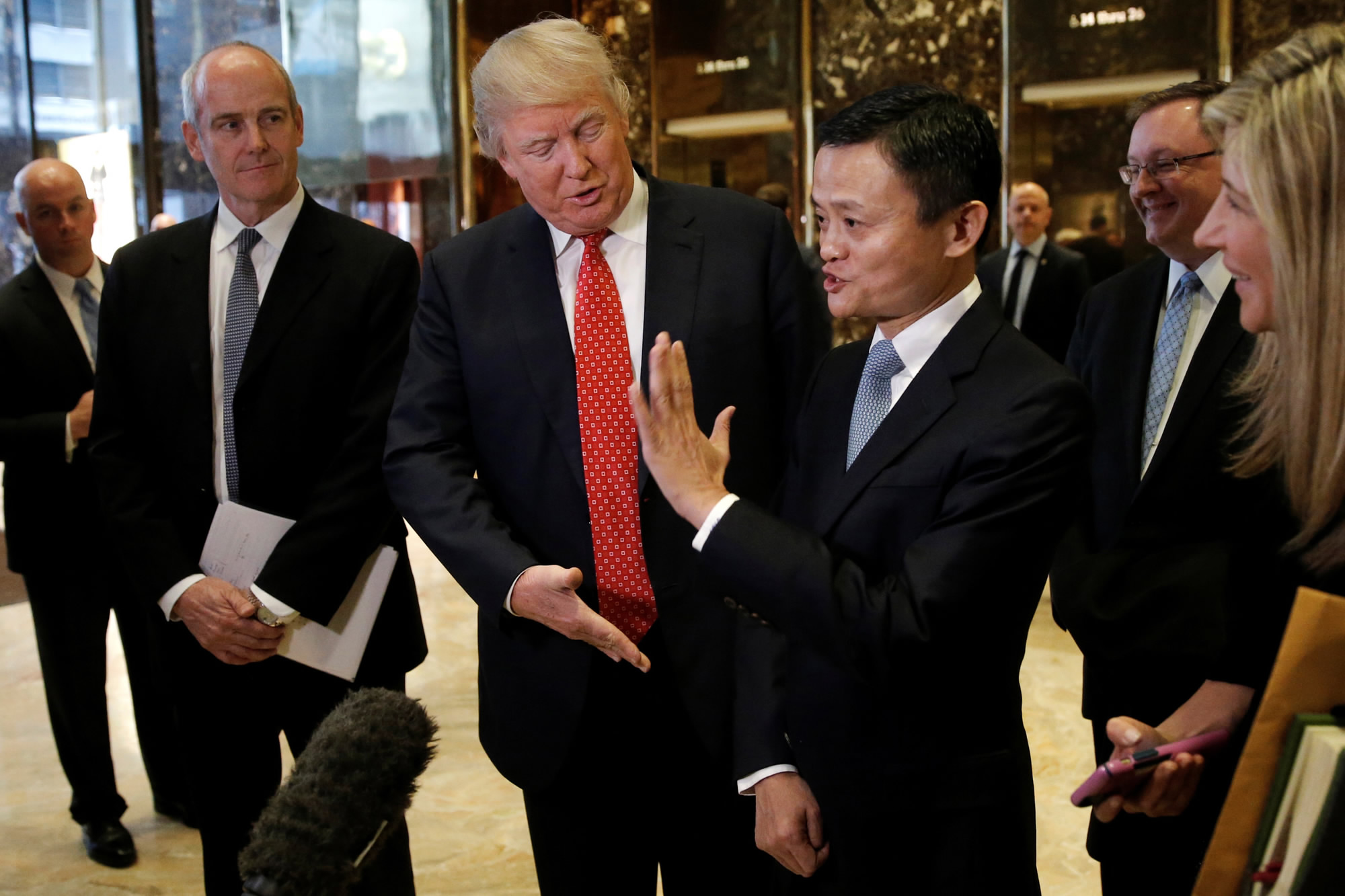 U.S. President-elect Donald Trump and Alibaba Executive Chairman Jack Ma speak with members of the news media after their meeting at Trump Tower in New York, U.S., January 9, 2017. / CFP Photo
Pascal Lamy, former Director-General of the WTO, once said, "To be competitive in global value chains means companies must have access to high quality and low cost inputs. This is why I say that to shoot at imports is to shoot yourself in the foot because you are undermining your exports as well. This is why we need a new narrative which recognizes that trade is about imports as well as exports."
As the Chinese saying goes, a war that kills 1,000 enemies by losing 800 of your own soldiers is not a winning war. A trade war that reduces the size of the cake and kills jobs amid the effort to increase them is not a smart move. So, why bother having a trade war?
Jack Ma, founder of Alibaba, promised, in his meeting with US President-elect Donald Trump, to increase one million US jobs by offering export opportunities for American small businesses, farmers and young entrepreneurs through his e-commerce platform. Trump responded, “Jack and I are going to do some great things”. Doing great things can “Make America Great Again”.
（Li Yong is senior research fellow at China Association of International Trade (CAIT), deputy secretary general and vice chairman at CAIT, co-chairing at the Center for US/Europe Economic and Strategic Studies. He is also an executive councilor at China Society of WTO Studies (CWTO) and a member of the Advisory Committee for Foreign Economic and Trade Policies at CWTO. The article reflects the author's opinion, not necessarily the view of CGTN.)
35km
Copyright © 2017