Experts: China not to blame for South Korea's smog
SOCIAL
By Wang Lei

South Korea has suffered frequent severe smog this year, for which the government blames China. However, South Korean experts have said the root cause of the toxic air lies at home.
Seoul recorded the second worst air quality in the world on March 21, only bettering Indian capital New Delhi. On April 2, about 500 women marched at Gwanghwamun Square in Seoul, demanding government action against pollution. A similar protest took place in the city on Thursday. Protesters demand government action against air pollution in Seoul, South Korea on April 20, 2017. /VCG Photo
South Korea's Ministry of Environment claimed in a report last month that up to 86 percent of inhalable particles in the country had originated abroad, pointing its finger at China.
But a report by Korea JoongAng Daily said blaming China was not well grounded. Kim Shin-do, a professor of environmental engineering at the University of Seoul, told the newspaper that the South Korean government used to say 85 percent of inhalable particles were caused by cars before shifting the blame to China. "The government is sitting idly by while passing the buck to China," he said. 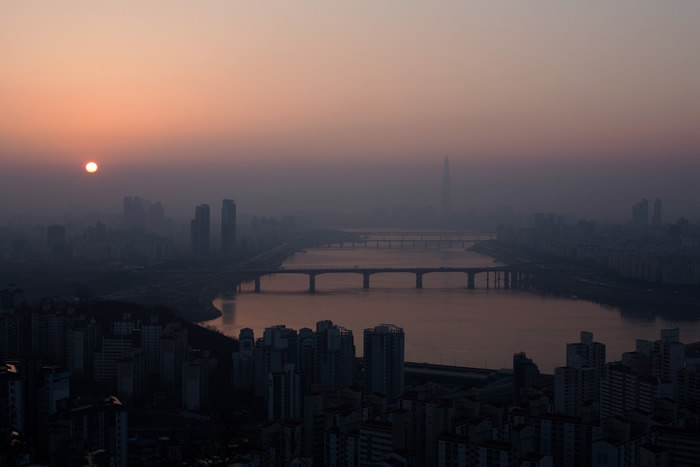 South Korean capital Seoul is shrouded by smog on March 13, 2017. /VCG Photo
"Most of the pollutants come from our living environment, but the government has been blaming cars, China and even cooking mackerel fish for years," said Kim Dong-sool, a professor at Kyung Hee University.
Kim Jeong-In, an economics professor at ChungAng University, called on the South Korean government to replace old coal-powered plants with natural gas ones, as well as encourage consumers to replace diesel cars with green vehicles.
"The ROK should also suggest to China that the two countries jointly research air pollution and share open data on fine particles," he told The Korea Herald.

South Korean city Incheon is shrouded by smog on January 3, 2017. /VCG Photo
According to a report by the Financial Times, most of South Korea's air pollutants come from vehicle emissions, construction or industrial sites as well as power plants. The government operates 53 coal-powered plants and intends to construct 20 more in the next five years. The capacity of the country's coal-powered plants increased nearly 95 percent between 2005 and 2016.
Copyright © 2017