Carrie Lam Cheng Yuet-ngor, the next leader of Hong Kong, hailed the implementation of the "one country, two systems" policy in the special administrative region (SAR) as a great success and pledged to be an "effective bridge" between Hong Kong and the central government during a recent interview with CCTV and Xinhua News.
Lam was elected the fifth-term chief executive of the Hong Kong SAR on March 26, and appointed by the State Council on March 31. 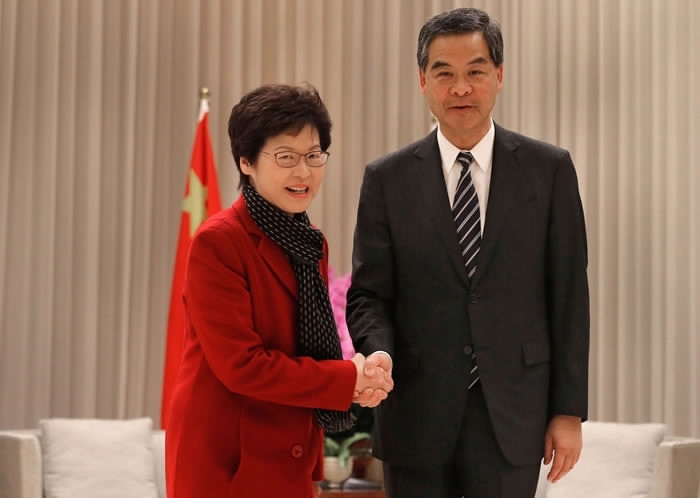 Hong Kong's Chief Executive-elect Carrie Lam (L) shakes hands with Chief Executive Leung Chun-ying at the government headquarters in Hong Kong, China, on March 27, 2017. /CFP Photo
Hong Kong, a former British colony, celebrates the 20th anniversary of its return to China this year. Lam said the implementation of the "one country, two systems" policy during the past two decades was "very successful," as Hong Kong has maintained its prosperity and stability.
"It is still a very famous financial center and international metropolis," said Lam, who will turn 60 next month, and become the first female leader of Hong Kong on July 1. "Twenty years after its return to China, Hong Kong is still the world's freest economy, with a strong competitiveness globally."
She stressed that Hong Kong's continued prosperity and stability has been guaranteed by the "one country, two systems" policy, a basic state policy the Chinese central government has adopted to realize the peaceful reunification of the country. 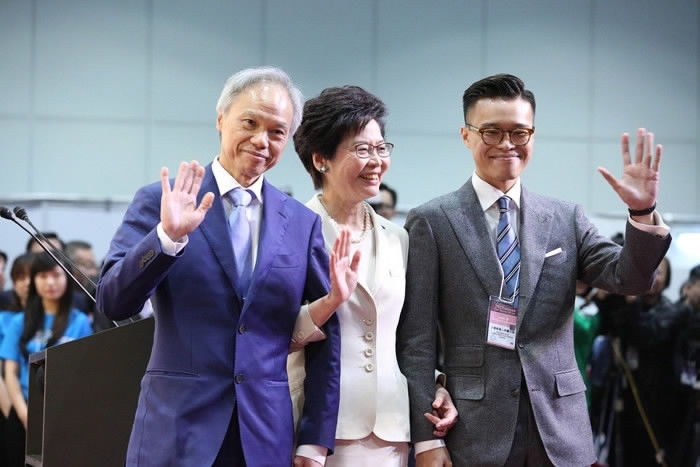 Carrie Lam (C), Hong Kong's chief executive-elect, stands on stage with candidates John Tsang (R), Hong Kong's former financial secretary and Woo Kwok-hing (L), a retired judge, after the announcement of the chief executive election in Hong Kong, China on March 26, 2017. /CFP Photo
During the interview, she pledged to be an "effective bridge" between Hong Kong and the central government. To play the role well, a chief executive should "truly reflect" Hong Kong citizens' views and sentiments to the central government and "clearly link" the latter's policies to the people of Hong Kong, she elaborated.
Lam emphasized the "dual responsibility and accountability" of the chief executive's role, saying that he or she must be accountable to the SAR and the central government at the same time.
"The notion of 'Hong Kong independence' will lead nowhere," she reiterated, calling it "a complete violation" of the "one country, two systems" policy and a threat to Hong Kong's prosperity and stability. Hong Kong will address the issue in accordance with law, she added. 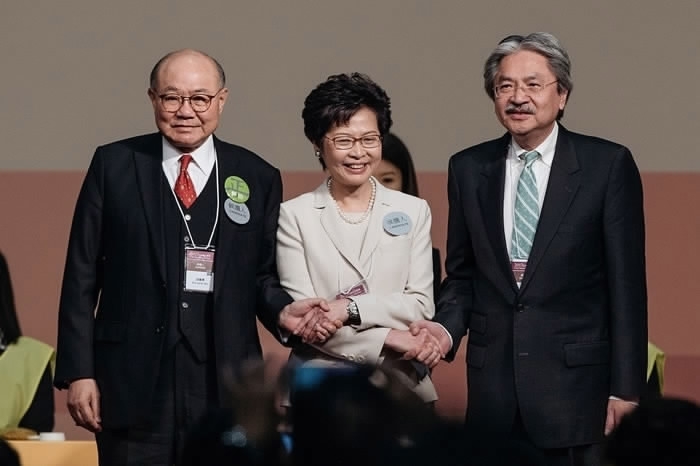 Hong Kong's Chief Executive-elect Carrie Lam (C) attends a press conference in Hong Kong, China, on March 26, 2017 after winning the election. /CFP Photo
On economic and social development, Lam said Hong Kong needs to figure out how to seize the opportunities provided by the deepening reform and opening-up nationwide, as well as the Belt and Road initiative, adding that the SAR will expand cooperation with other parts of the country on economic, cultural, educational and youth exchanges.
"The government may need to play a more active role in economic development," she pointed out. Her government will improve Hong Kong's medical and welfare systems and make more efforts to help the poor, the elderly and disadvantaged groups, she promised. "We must enable Hong Kong citizens to share in the benefits of economic growth widely."
Lam majored in social work and sociology while at university. After graduating in 1980, she has been serving in the government for more than 36 years. "I like serving the people, not making big money," the veteran civil servant laughed.
1km
Copyright © 2017