Traveling from Fergana in eastern Uzbekistan to capital city Tashkent used to involve a long and arduous trip via neighboring country Tajikistan or a perilous mountainside drive. But thanks to a cooperation project between China and Uzbekistan, the longest tunnel in Central Asia has been built to slash the journey time and in the process boost trade and investment.
On June 21, 2016, an inaugural train passed through a newly-built tunnel – the 19.2-km-long Qamchiq Tunnel, in 16 minutes. The electrified rail link between Angren and Pap connects the Fergana Valley region with the rest of Uzbekistan. 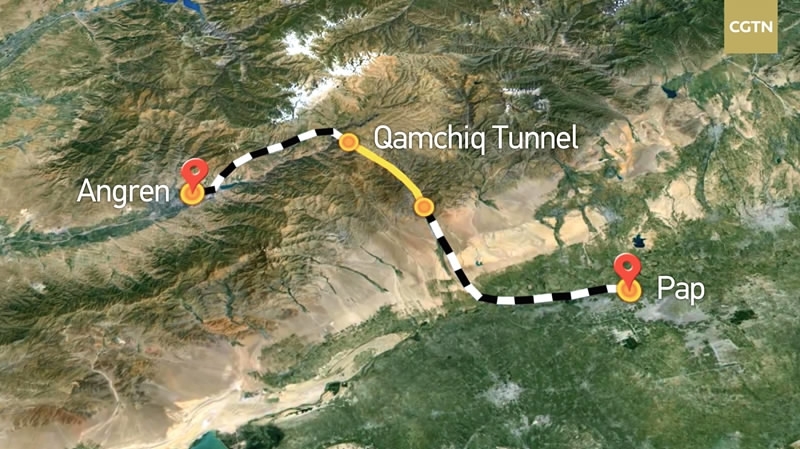 CGTN Photo‍
China Railway Tunnel Group (CRTG) played a central role in the construction of this grand project — one that had stumped engineering companies around the world — and completed it in three years. In an exclusive interview with CGTN, CRTG chief engineer Hong Kairong shared the stories behind this China-Uzbekistan cooperation deal under the Belt and Road Initiative.
This project epitomizes the aims of the Belt and Road Initiative, a scheme designed to boost connectivity across the region through infrastructure investment.
Tackling differences to reach a “Chinese speed”
00:00
00:00
The construction project was CRTG’s first in Central Asia, and numerous obstacles had to be overcome to ensure that it flowed smoothly.
Hong told CGTN that both the Chinese and Uzbek governments attached great significance to the project and helped create a favorable environment for completion.
The positive cooperation between the two sides meant a consensus was reached on track gauge (the spacing of rails), and Uzbek Railways decided to adopt CRTG’s standard of tunnel techniques rather than its own.
Local and Chinese workers jointly formed the construction team, a showcase of people-to-people exchange. CRTG also invited Chinese students in Uzbekistan to help tackle language barriers and ensure more effective cooperation.
The construction was completed six months earlier than scheduled – a pace of work later dubbed “Chinese speed” by locals. A similar tunnel, the 57-km-long Gotthart Base tunnel in Switzerland, took 17 years to finish. 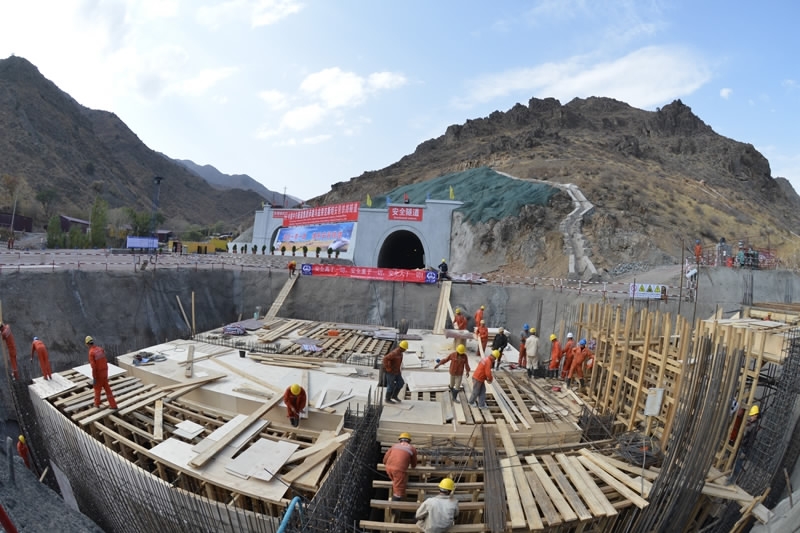 The construction site of Qamchiq Tunnel./ Photo by CRTG
Hong said the team achieved the three-year miracle through a strong technical ability and swift adaptation to local conditions.
The CTRG team tackled complex geological conditions. Rock burst, a rare phenomenon in tunnel construction which literally results in rocks exploding, became a major problem in the construction of the Qamchiq Tunnel, along with gushing water, the most common geological hazard encountered during tunnel building.
Hong said it was “inevitable” that CRTG would take over this project upon request of the Uzbekistan government, as the past 30 years of rapid development in China mean Chinese teams have developed experience and skill in tunnel building and related technologies.
A benefit to the region
00:00
00:00
‍
The freight volume along the railway line has reached seven million tons and the passenger flow 1.5 million since the tunnel began operating in June 2016, numbers that Hong said were “unimaginable in the past.”
“The bottleneck in the region consumed the resources,” Hong explained. Before there was a tunnel, Fergana Valley locals had two choices if they wished to visit their capital. Take a train via another country, or brave the highway that runs across mountainous areas - the 2,200-meter-high Kamchick pass road, where traffic congestion is commonplace.
Hong said, in the past, fresh fruit was transported one day late, causing low industrial capacity and weak exports. “Once we constructed the railway, the transportation issue was effectively solved.”
After the success of the railway in Uzbekistan, the president of Kyrgyzstan actively promoted the construction of the China-Kyrgyzstan train route.
Quality production capacity to go global
00:00
00:00
The tunnel project cost 455 million US dollars, supported by loans totalling 350 million US dollars from the Export-Import Bank of China. “We have advantages in international financial cooperation,” Hong said, adding that the Qamchiq Tunnel project would set a good reference point for future China-Central Asia cooperation.
Under the Belt and Road Initiative, banks like China Development Bank and the Asian Infrastructure Investment Bank have given targeted financial support for infrastructure development in Central Asia, a move expected to reduce regional transportation costs and help boost trade and economic growth.
Hong suggested Chinese enterprises should make full use of their industrial and technical advantages, including equipment, soft and hard technologies. “The sufficient and quality production capacity that Chinese enterprises possess should go global,” Hong said, adding that the strength in infrastructure construction should also extend to other relevant areas to promote further cooperation.
Copyright © 2017