Speaking at a university’s graduation ceremony is normally regarded as a moment of pride for college students – and all of those affiliated with them. But instead of receiving applause in her home country for winning the spotlight at a foreign university’s momentous occasion, a Chinese student was slammed by netizens after her remarks at the University of Maryland misrepresented China.

Yang Shuping caused outrage online for flattering the fresh air in the US and the open-minded society that allows conversations about prickly topics, while reinforcing negative stereotypes about China. 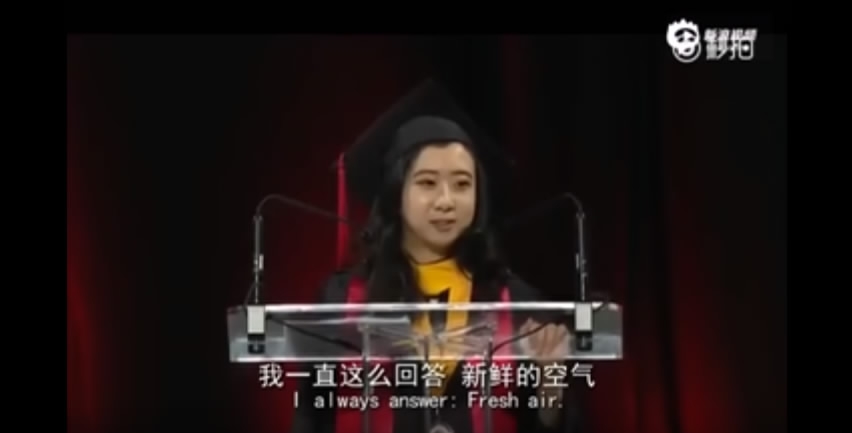 “People often ask me: Why did you come to the University of Maryland? I always answer: Fresh air,” Yang began her speech at the commencement ceremony of UMD, which was held on Sunday.

Yang, who was born in the city of Kunming in the southwestern province of Yunnan, continued: “I grew up in a city in China, where I had to wear a face mask every time I went outside, otherwise, I might get sick.”

Her account is in stark contrast to reality, as Kunming has repeatedly been ranked as one of China's cities with the best air quality.

Describing the air in the United States as “so sweet and fresh, and oddly luxurious,” Yang recalled the moment she took her mask off upon arriving at Dallas Airport, and breathing safely for the first time on the American soil. 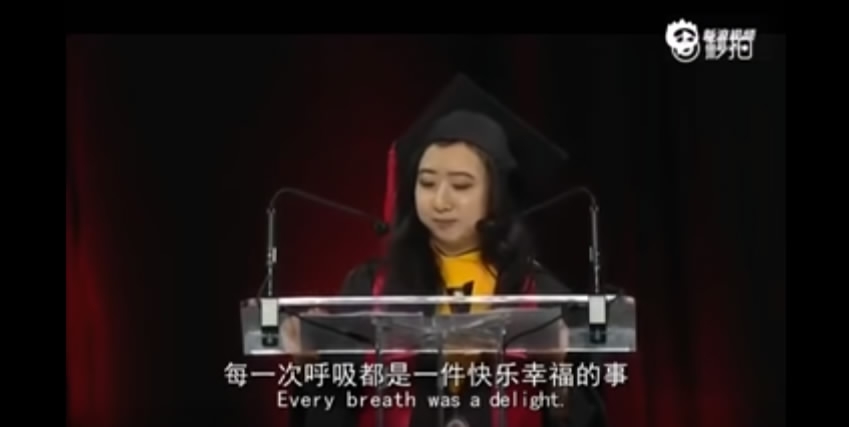 “No more fog on my glasses, no more difficulty in breathing, no more suppression,” Yang claimed, adding that “every breath was a delight.”

After touting the air quality, the Chinese student moved on to express appreciation and gratitude to the opportunity the US has given her in self-expression, which she reported was an alien concept until she came to the University of Maryland. 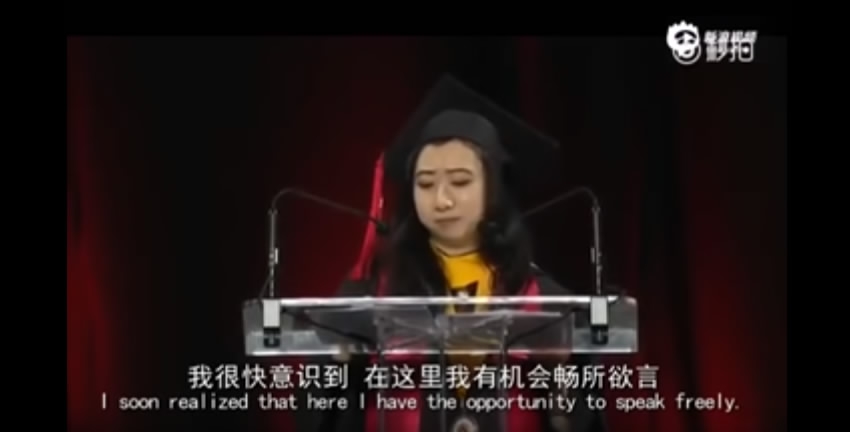 “I have learned that the right to freely express one's self is sacred in America,” the psychology and theater majored girl cried, recalling the time she watched a student-run play about the 1992 Los Angeles Riots, in which actors openly discussed controversial political topics such as racism and sexism. 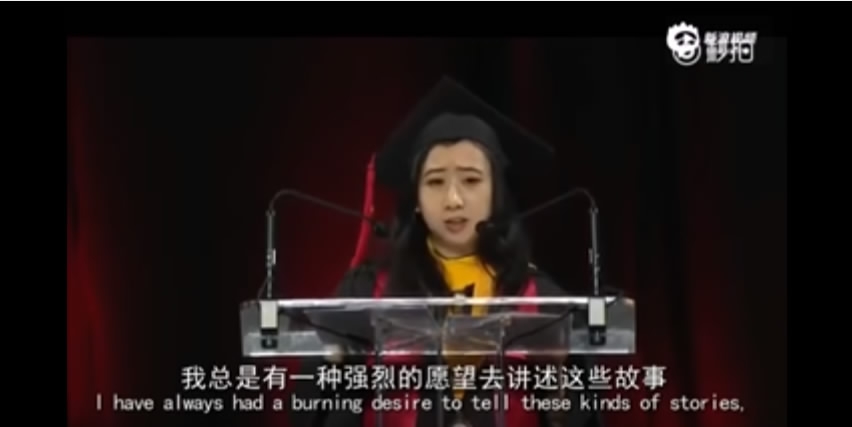 The student speaker said she always had the “burning desire” to tell this kind of political stories, which she used to be convinced that “only authorities could own the narrative”.

Yang’s remarks soon stirred up a storm among the Chinese community at home and abroad after a video of her commencement speech went viral on social media platforms including Youtube, Facebook and Weibo, the Chinese equivalent of Twitter.

While many accused Yang of exaggerating and deliberately defaming the air condition in her home country, others deplored her attempt to curry favour with a foreign university.

“The freedom in your university is giving a speech full of lies. Shuping Yang is totally a liar. I am wondering why your university can accept such a student,” a Facebook user @JayaZhou commented while watching the live broadcast of the university’s graduation ceremony.

“Full of bias and unreal facts in the speech! As a Chinese (student) who studied in the US, I will not deny the fact that America has some good aspects in its political and educational systems, but please also treat your own country with compassion, at least with fairness,” @YehYoung said on Facebook.

Meanwhile, the Chinese blogosphere was flooded with a slew of burning remarks against Yang.

“Is the air quality in Kunming really that bad as she said? Are the blue skies and white clouds there all fake? Kunming will not take responsibility of this kind of lies that are made in an effort to propagate freedom and human rights,” a netizen who goes by the name “Haimianzhizhizhi” commented.

“How could you win respect from others if you yourself show no respect to your own country?” another user @xiaosuancaiQAQ questioned. 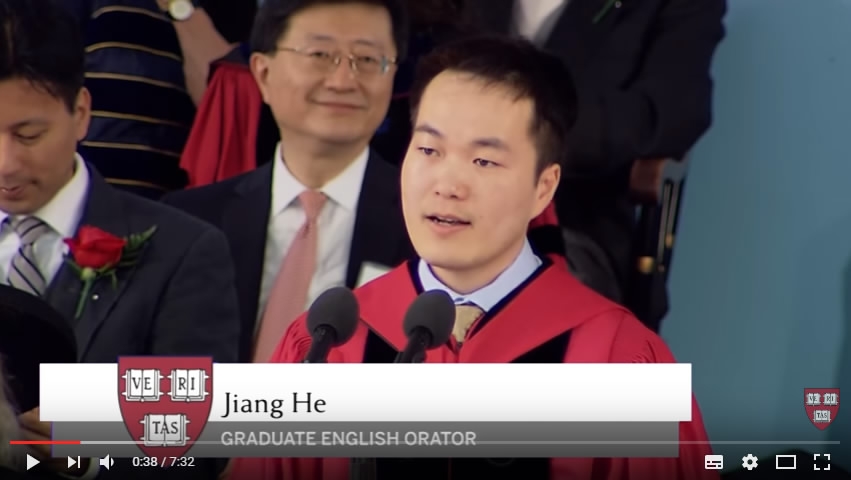 He Jiang spoke last year at the graduation ceremony of Harvard University.

Chinese netizens also compared Yang and Harvard graduate He Jiang. In 2016, He was the first Chinese to speak at a Harvard’s commencement ceremony, using the platform given to him to address problems in China using a just approach and stressing the significance of education for students from rural areas using his own childhood experience as an example.

“While someone’s speech is so inspiring in encouraging the audience to change the world with their own powers, someone else's remarks are so superficial, let alone questionable in their credibility,” noted @Lizhu, a Weibo user.

After the video went viral, an online activity “Proud of China” was launched, calling on Chinese students in the United States to voice their love for their home country in response to the false statements Yang had made during her commencement speech. 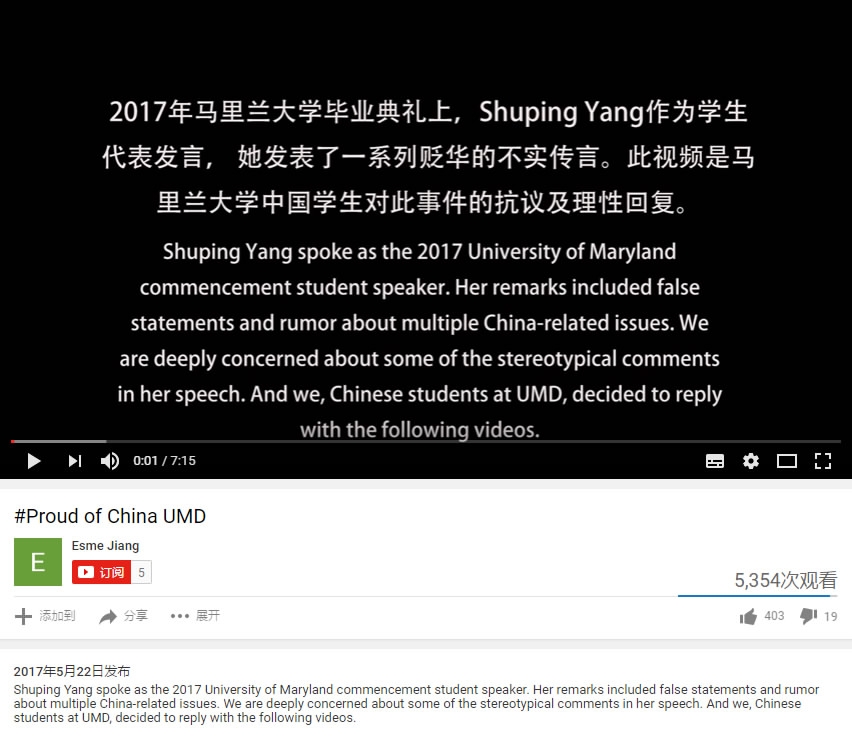 Screenshot of students at UMD responding to Yang's speech.

In a seven-minute-long video released on Monday by @Esme Jiang on Youtube as part of the activity, a total of eight students from UMD shared their perspectives about how China is different from what Yang had tried to promote. 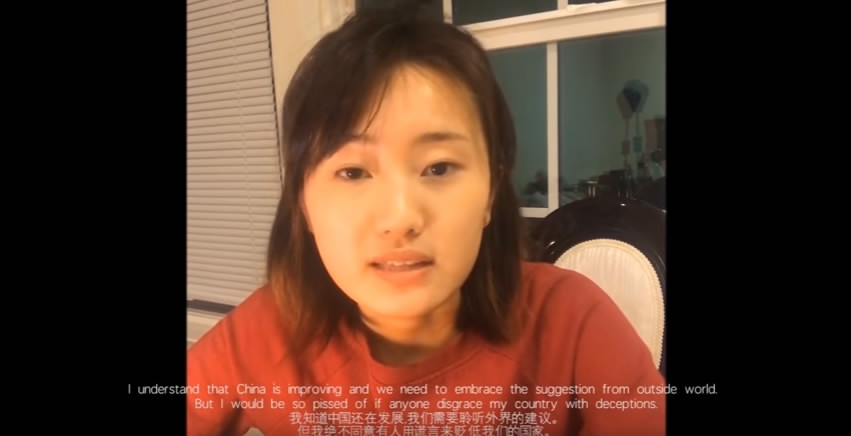 “I understand that China is improving and we need to embrace the suggestions from the outside world. But I would be so pissed off if anyone disgraces my country with deceptions,” said Xinlang Jiang from southwest China’s Chongqing. She also expressed her love for the air and food in her hometown. 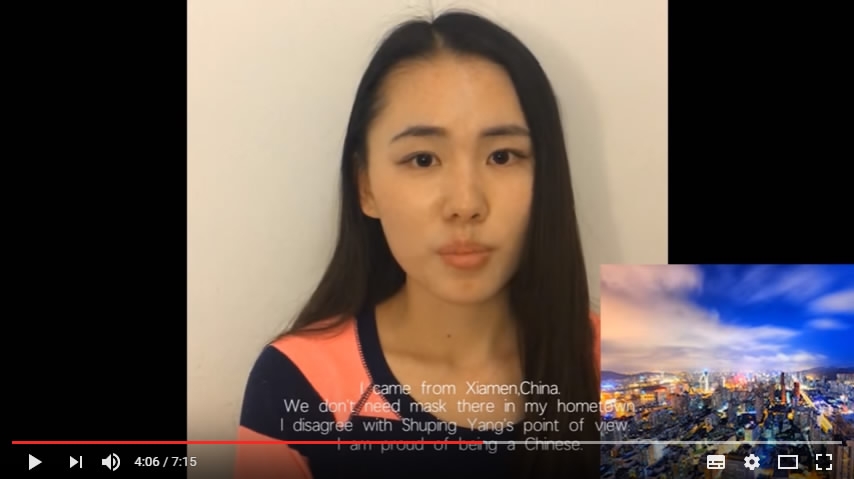 Another student at UMD expressed perspectives different from Yang's.

“I came from Xiamen, China. We don’t need mask there. I disagree with Shuping Yang’s point of view. I am proud of China,” another student said.

Thousands of posts were posted on Facebook by Chinese students studying in the US, introducing fascinating landscapes in their hometowns with pictures along with the hashtag #ProudofChina.

Amid the public uproar, the University of Maryland threw its weight behind the student’s remarks, despite the opposing voices. 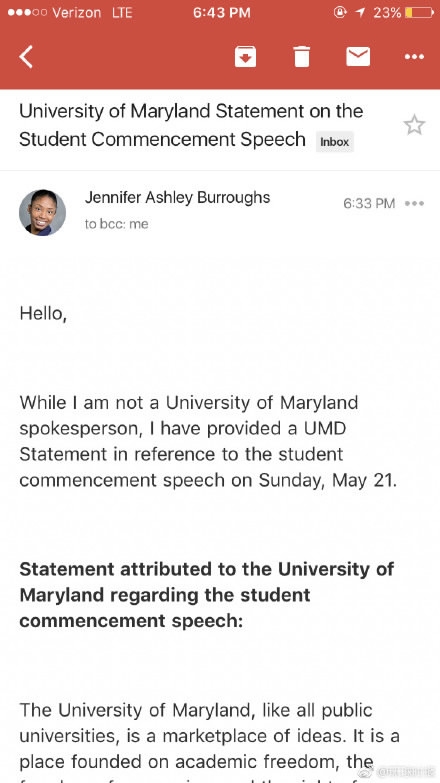 Statement by the University of Maryland.

“The University proudly supports Shuping’s right to share her views and her unique perspectives and we commend her on lending her voice on this joyous occasions,” Jennifer Ashley Burroughs, communication coordinator from the university said in UMD statement.

On Monday, Yang published an apology on Weibo, saying that she felt deeply “upset” about her controversial speech, which initially aimed at sharing her personal experience of studying overseas and was not meant to disgrace her country. She also extended her hope to make positive contributions to China, using what she learned abroad.

Early Tuesday morning, Yang apologized again. “Sorry! Forgive my ignorance, I love my country,” she posted on her Weibo account.