“I’ve run into a sandstorm,” Fan Yusu told her friend.
The 44-year-old confinement nanny was talking about the flock of reporters swarming into her slum residence at a small village in suburban Beijing over the last two days, after a piece of her autobiographical work became an unexpected online sensation.
The essay titled “I am Fan Yusu” garnered over 100,000 clicks in less than 24 hours after it was posted on the WeChat account “noon-story.” It tells, in plain but witty language, how a poor country girl struggled through life yet stuck to her literary dream. 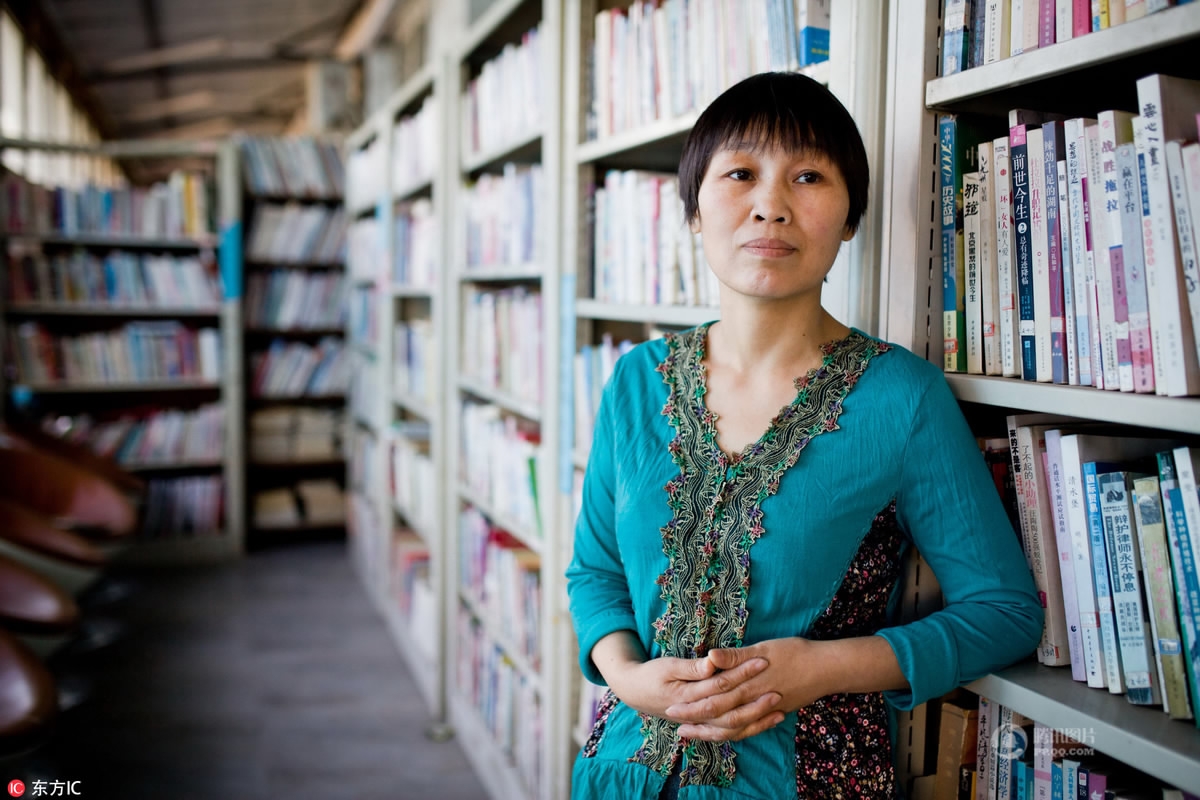 Fan in the Picun library. /dfic Photo
“My life is a disheartening book, fate has bound me badly,” the essay started with these simple words, and then delved into Fan’s memories of her past decades. Happiness at some points, bitterness at others. Fan recollects her troubled youth in a large, poor family: the strong, illiterate mother, the bedridden father and sisters, the grumpy brothers, and her, a girl who “expanded to the extent of bursting” at the age of 12.
The rebellious teenager tried to fight her way out, although unsuccessfully, by fleeing home and roaming southern China for months. The tramp-like experience only taught her a hard lesson about life’s toughness.
Her life in the following years was punctuated by more troubles. She struggled through a failed marriage with an abusive man. Her hard-hearted brother shut the door to her and her two young daughters thereafter. With no other alternatives, Fan settled down in Beijing, working for a rich family’s mistress as a nanny. 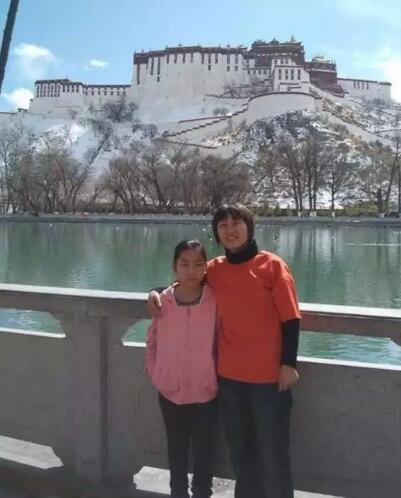 Fan Yusu with her daughter in Lhasa, Tibet. /Photo provided by Fan
The surprising thing about the recollection is how hopeful and how much fun it seems, despite all the blood and tears behind the lines.
“My landlord is the former secretary of Picun village, the equal of the ousted president of Picun…My children live in the mansion of the ousted president, guarded by the top class security personnel (referring to the house’s Rough Collie and Tibetan Mastiff), and we feel so happy.” 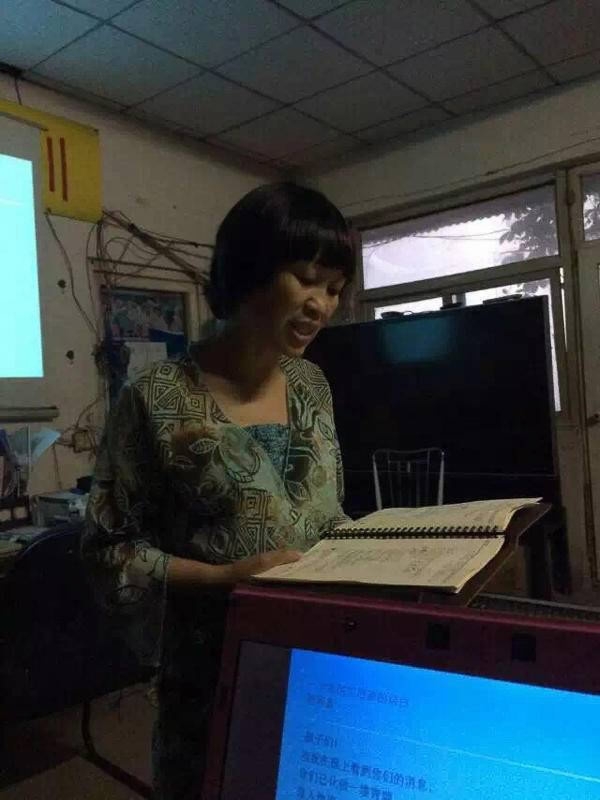 Fan Yusu reads to other migrant workers. /Photo provided by Fan
Fan, for sure, didn’t give up on hope and humanity. The unpleasantness didn’t lead her to harbor resentment. Instead, she wanted to pass on her mother’s love to other disadvantaged people just like her, by “hugging every tramp with disabilities, and every patient with mental problems.”
The story has received warm praise from Chinese netizens.
“Her writing talent is not bestowed by a god, it’s nurtured by her mom, her experience, mountains of books and her kind heart,” a reader named @xingxingma commented on Chinese social media platform WeChat.
“It’s truly a good story, I’ve read through it wholeheartedly. She is a strong woman, with strength in heart and powerful words in her story,” said another named @Vivian.
The media flooded in, and publishers that smelt a potential hit were quick to reach out to Fan. The instant fame, however, didn’t make her happy. 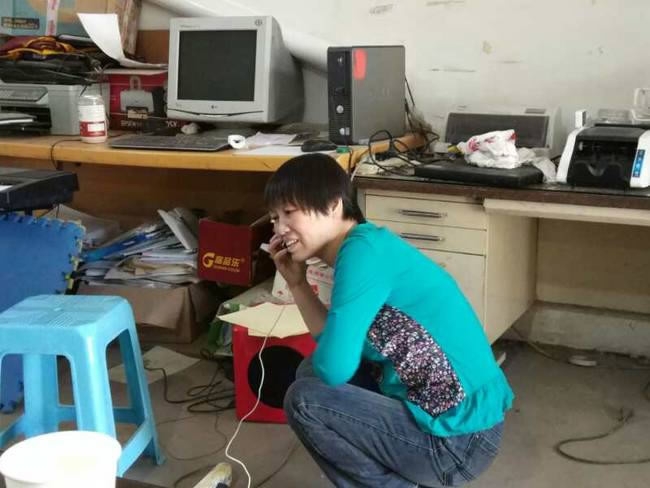 Fan Yusu at her home in Picun village, Beijing. /China.com Photo
“Fan Yusu said she was used to a solitary life, and felt uncomfortable with the public’s attention, but she thanked people for the encouragement and support,” Sun Heng, an acquaintance of Fan, told the paper.cn. 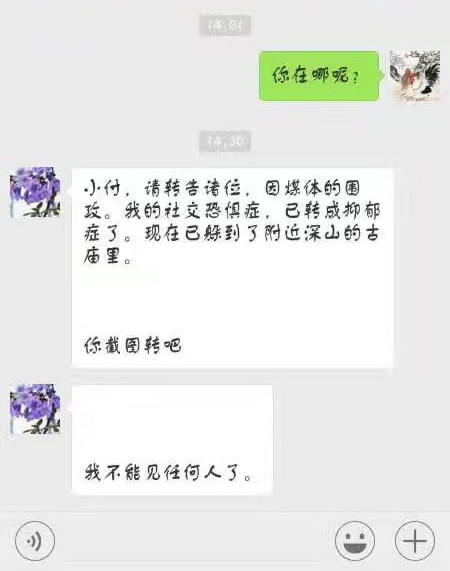 Screenshot of Fan Yusu's Wechat message.
Fan later confessed to the media through a friend by the name of Xiaofu: “ Xiaofu, please tell all, my social anxiety disorder has turned into depression since I’ve come under siege by the media outlets. I’m now hiding away in a temple deep in the mountains. I can’t meet anyone.”
Copyright © 2017