By CGTN's Lisa Chiu
From climate change to trade deficit, here’s how data collected by the US and Chinese governments highlight the complexity of the US-China relationship.
1.The D-word
Last week, Trump signed two executive orders aimed at reducing the trade deficit with China, by enforcing US anti-dumping laws. The gap is currently 347 billion US dollars. Just 20 years ago, it was zero. 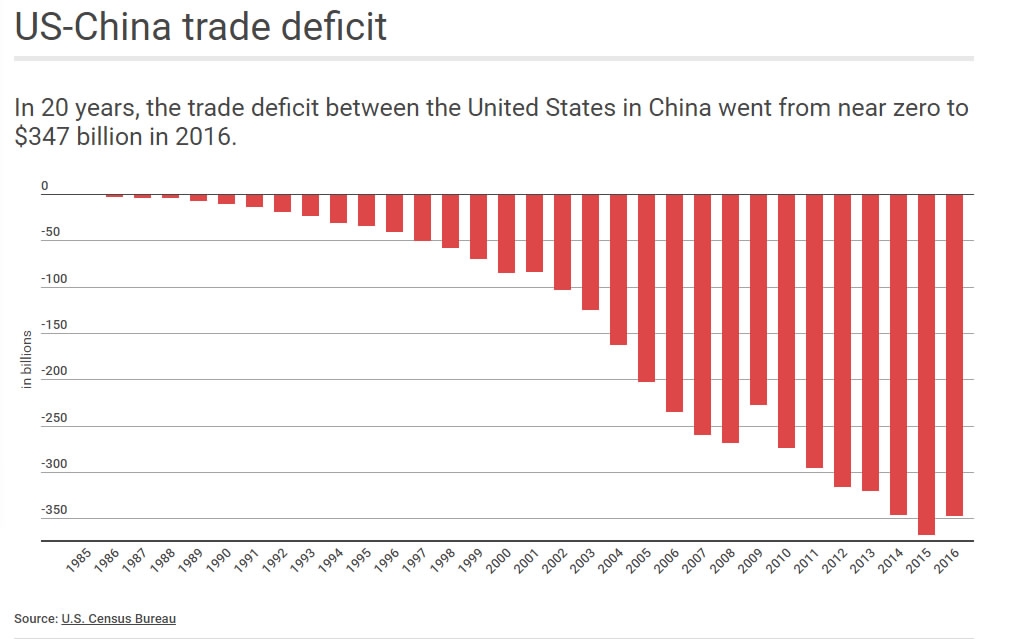 A deficit happens when a nation imports more than it’s exporting. In 2016, the US imported 463 billion US dollars in goods from China, but only exported 116 billion US dollars to China.
In the chart below, the space between the green and brown lines shows you the trade gap. 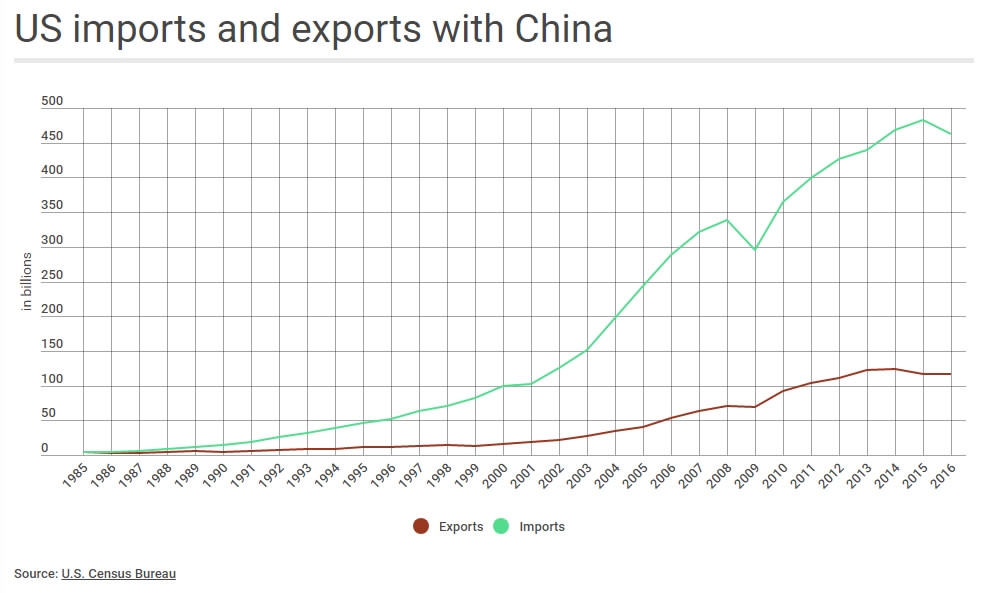 What these numbers don't show you are the US goods that were sent to China for assembly and then returned to the US. These so-called "intermediate goods" are considered Chinese imports, even though the parts were actually made in the US.
Oxford Economics and the US China Business Council found that if the value of these goods were subtracted from China's exports, the deficit would be cut in half.
While the deficit concerns politicians and economists, it's not unique to the US trade relationship with China.
The US has a trade imbalance with many nations and regions around the world. The deficit with China is less than half the deficit that the US has with the rest of the world.
Scale is important to note here. The US economy, measured in gross domestic product, was 18.6 trillion US dollars in 2016 compared to China’s 10.8 trillion US dollars GDP in 2016.
The size of the US economy allowed it to purchase 2.2 trillion US dollars in goods from around the world in 2015, while exporting 1.5 trillion US dollars to other nations.
In comparison, China imported 425 billion US dollars from other nations in 2015, while exporting 288 billion US dollars, according to data from the China Statistical Yearbook published by China’s National Bureau of Statistics.
China has a trade deficit with the world, too – 137 billion US dollars in 2015. 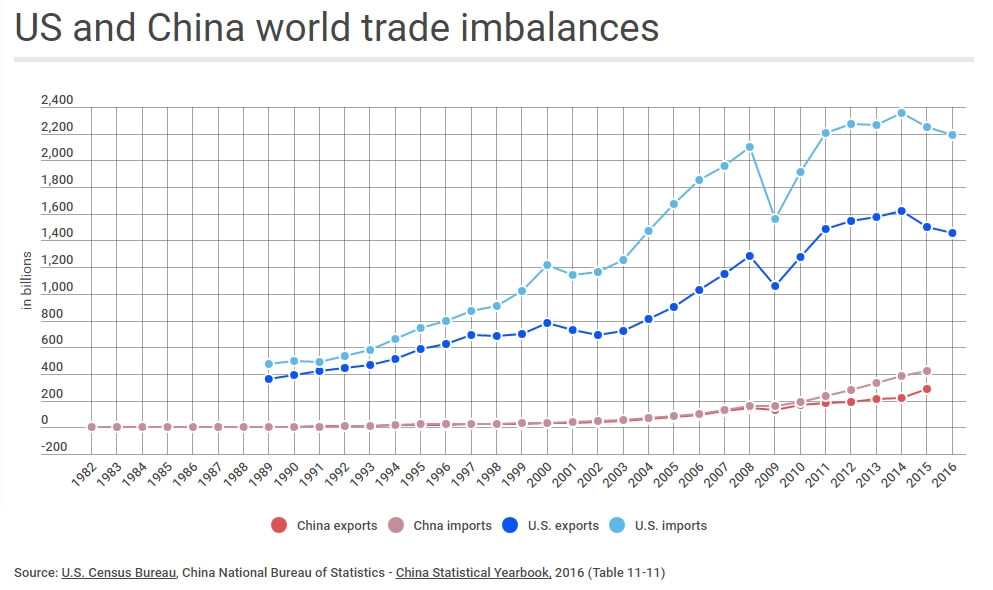 2. Tariffs
One way Trump hopes to reduce the deficit with China is tougher enforcement of protectionist tariffs against certain Chinese imports. The US argues that some Chinese companies sell their products at lower prices in foreign markets than they do at home – an unfair practice known as dumping.
Of the current 300 anti-dumping orders that the US has in place against other countries and regions, 109 are from China.
National Trade Council Director Peter Navarro said that 2.8 billion US dollars in import taxes have gone uncollected since 2001, and that the Trump administration will institute new measures to collect on those duties, CNN reported.
The US collected 34 billion US dollars in tariffs in 2015. More than 40 percent came from China, according to CNBC.
Many US trade analysts warn that hiking tariffs, and stepping up enforcement, would likely raise the price of products that American consumers and businesses buy.
The conservative American Action Forum (AAF) published a study showing prices of goods in the US could increase by up to 250 billion US dollars annually under Trump's plans.
The AAF believes Trump's policy will increase goods purchased by a total of 1,649 US dollars per person in California, and 522 US dollars per person in New York. 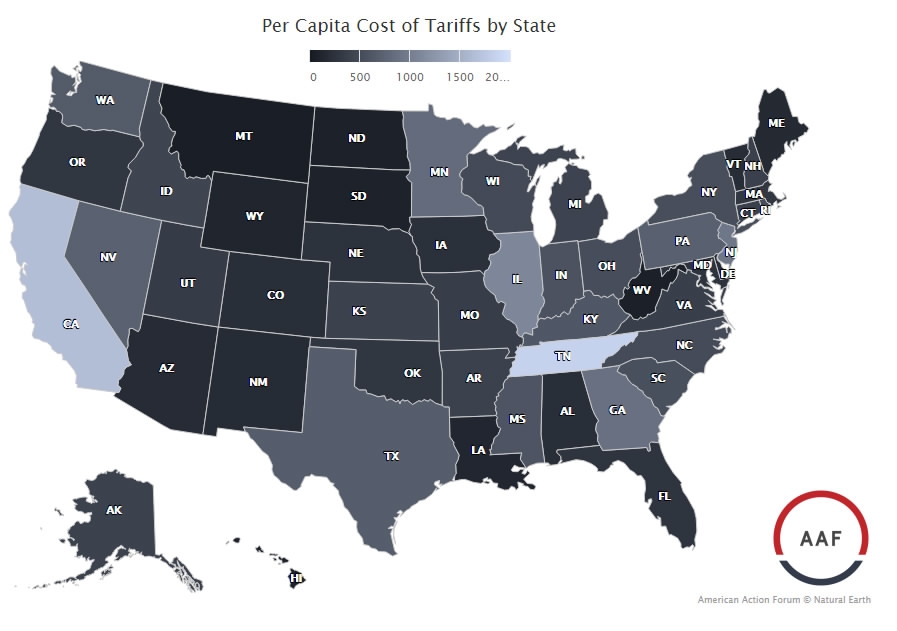 An analysis by the Peterson Institute of International Economics concludes the poorest US households will be hurt the most by Trump's trade policies.
People who make less than 5,000 US dollars, for example, would see a 12-percent increase in the price of goods they purchase, while people making 150,000 dollars or more would see a 5-percent increase, the Peterson Institute found. 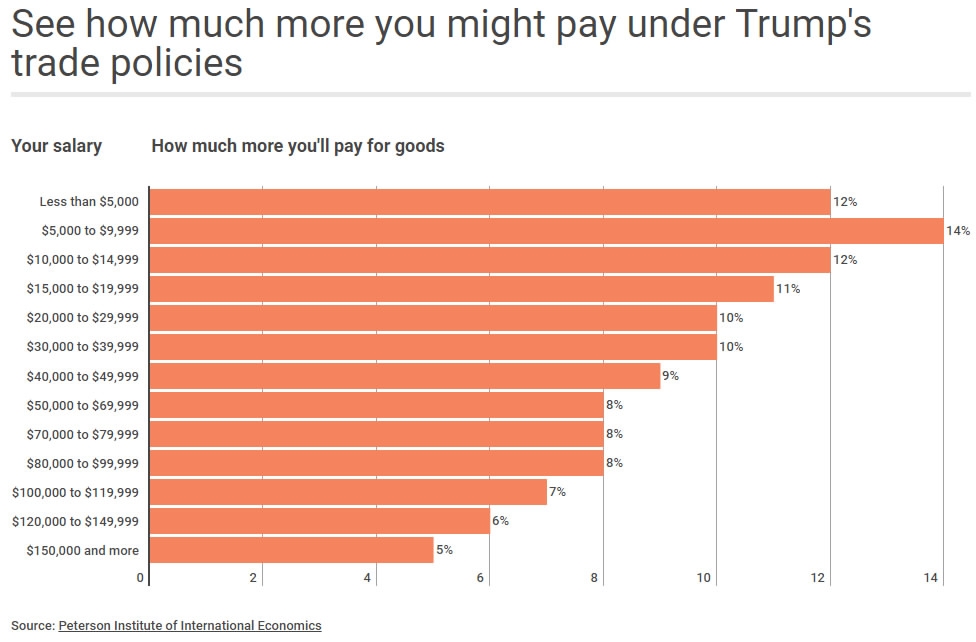 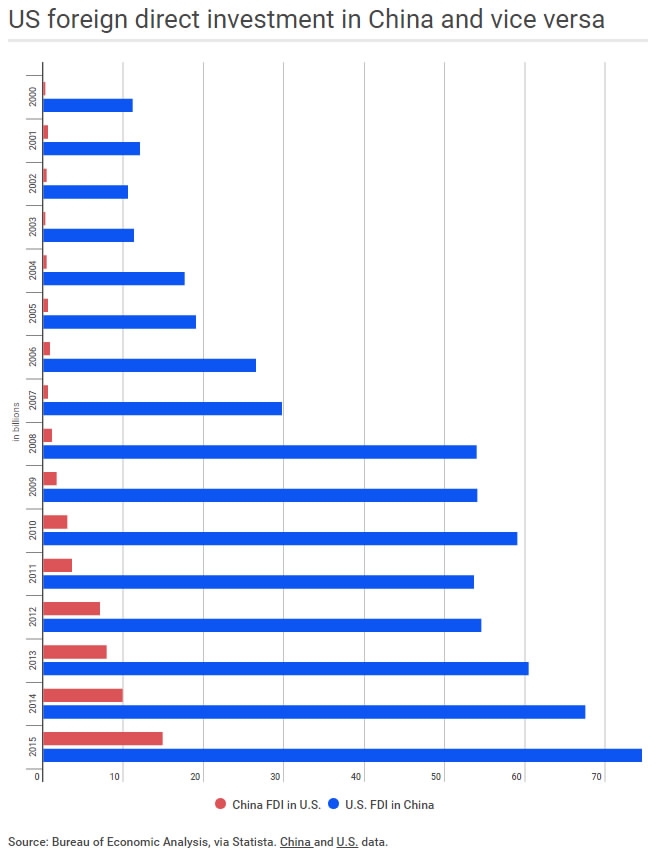 China's US investments have been growing. In 2015, China invested 15 billion US dollars in the US.
US corporations owned by Chinese parent companies include AMC Entertainment, Legendary Entertainment, General Electric Appliance Business, Smithfield Foods and Starwood Hotels.
4. Debt: the other D-word
China's large holdings of US Treasury securities also concerns the United States.
Japan surpassed China as the largest holder of US debt at the end of last year. As of January 2017, Japan held over 1.1 trillion US dollars in US Treasury securities. China's share of US securities was more than 1 trillion dollars, the US Treasury Department reported.
As of April 6, the US debt is now 19.8 trillion dollars. 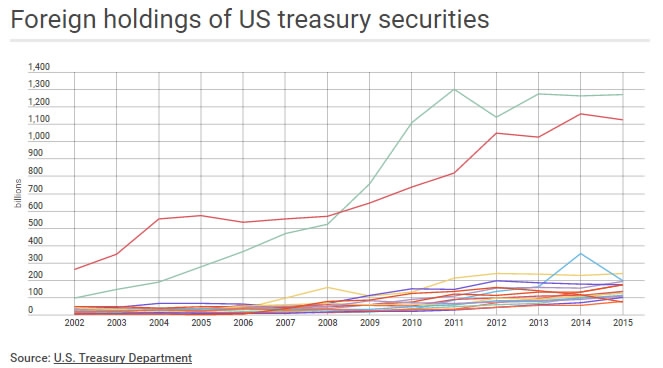 5. Climate change cooperation
In 2014, then US President Barack Obama and China's President Xi Jinping made headlines around the world when they agreed to reduce greenhouse gas emissions ahead of the Paris climate talks.
China and the US are the world’s two largest emitters of greenhouse gasses. 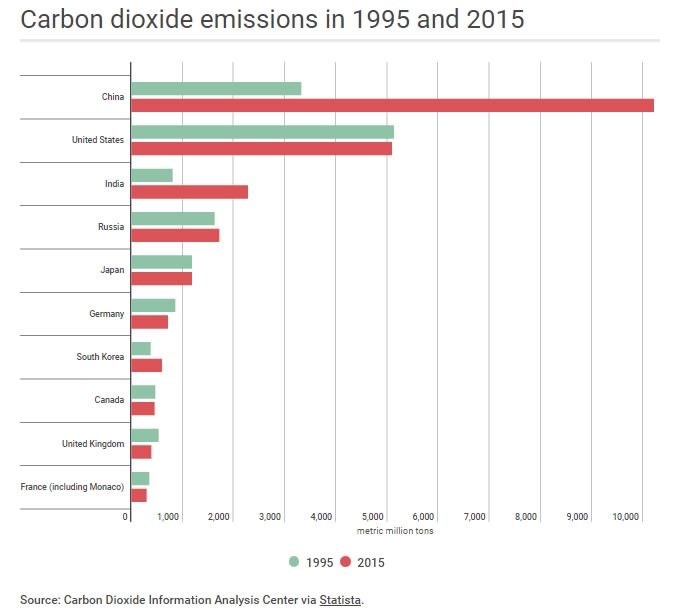 In his first federal budget proposal, Trump called for an end to US contributions to the UN Green Climate Fund. This could effectively remove the US from the Paris agreement to reduce emissions worldwide.
The US had committed 3 billion US dollars to the fund, and has so far contributed 1 billion US dollars. Many predicted that climate change would be a major topic of conversation at the meeting between Xi and Trump this week.
6. Getting to know each other
More Americans and Chinese are visiting each other’s countries.
Americans are the second-largest group of visitors to China, behind Japan. Meanwhile, the Chinese were the fourth-largest group of visitors to the US trailing Japan, the UK, Mexico and Canada.
Chinese tourists visiting the US spent 30 billion US dollars in 2015, according to the International Trade Administration. 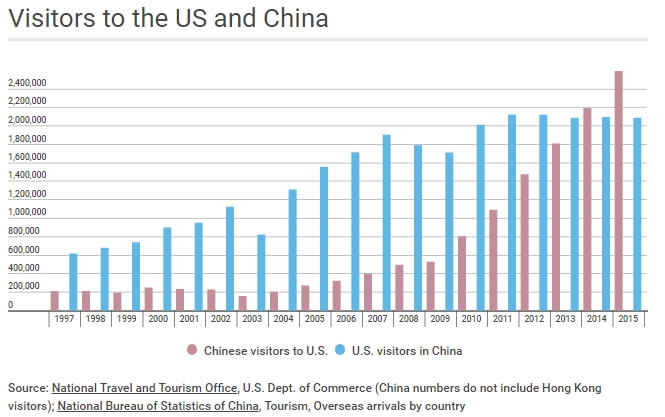 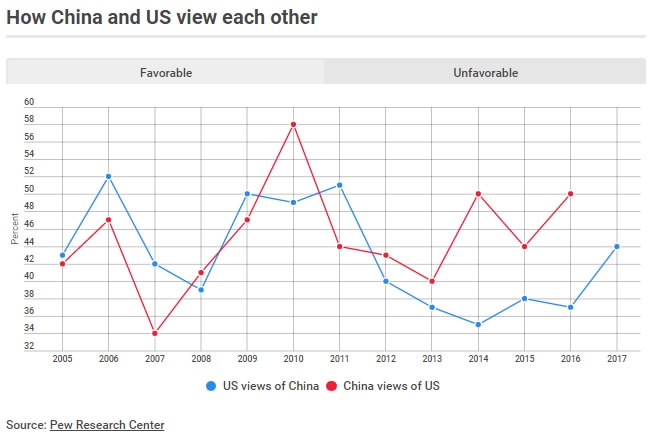 How China and US view each other favorably 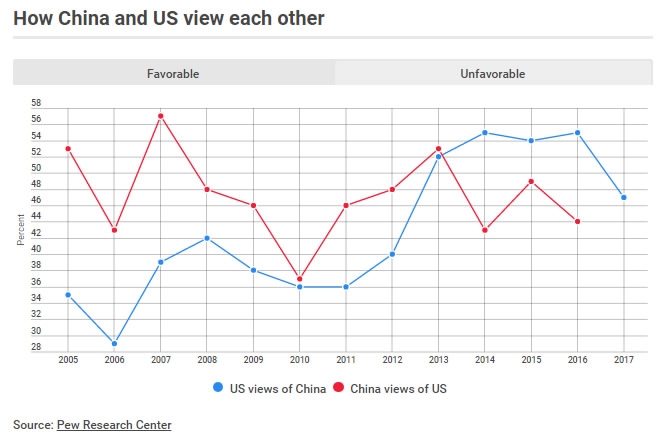 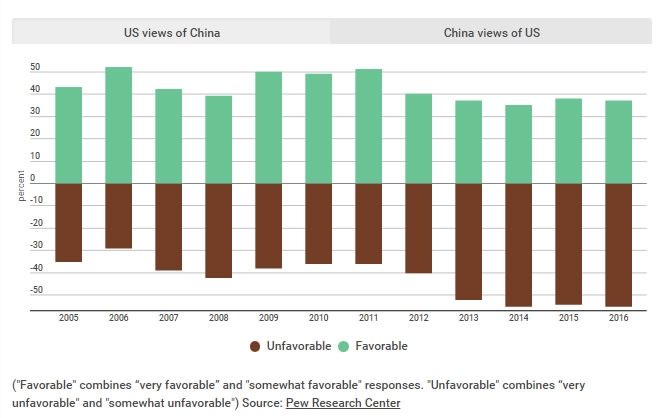 US views of China 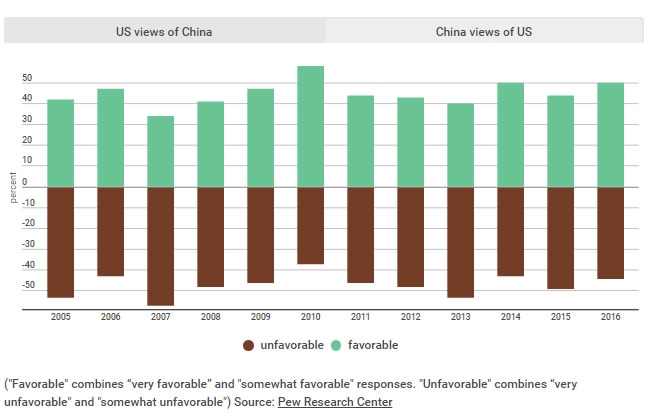