By CGTN’s Xia Cheng
Chinese consumers are drinking more coffee and buying more freshly roasted beans, a trend Starbucks, as one of most popular global coffee chains, plans to take advantage of. The coffee company said it would allow customers in China to better understand the craft of roasting and would copy China's social gifting model in the US. 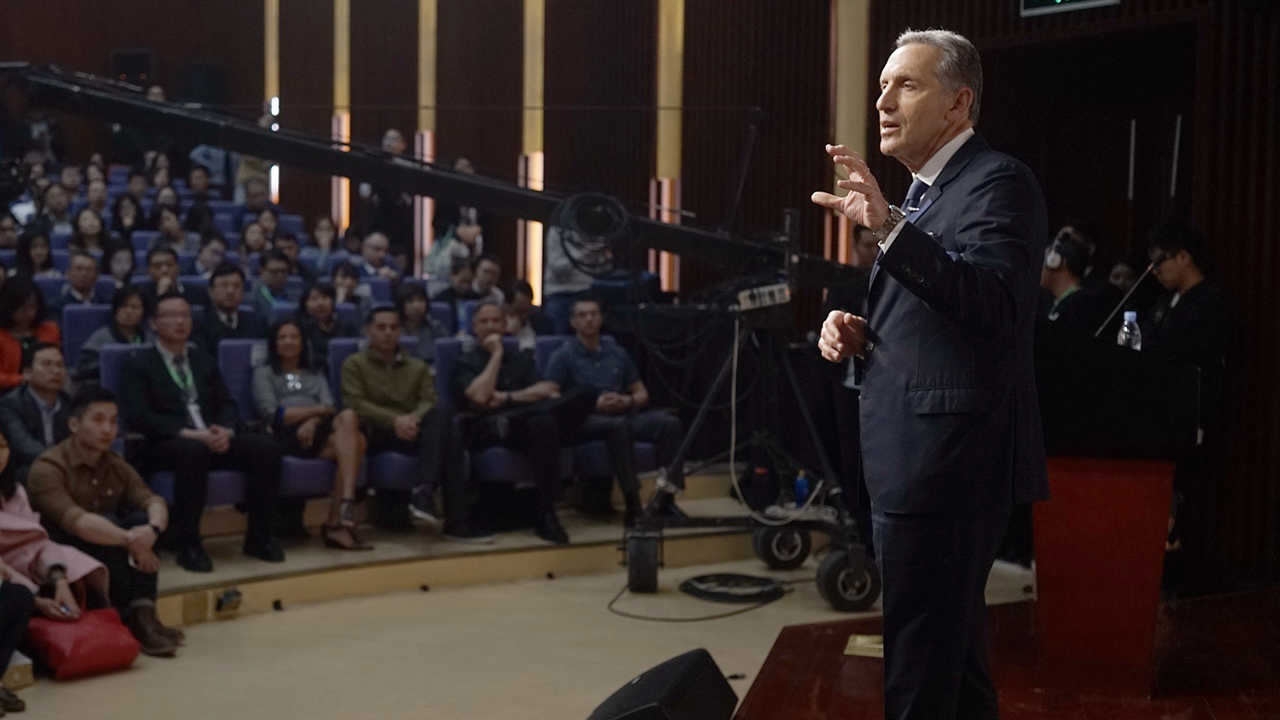 Howard Schultz, Starbucks Chairman and CEO, delivers a speech at Tsinghua University, in Beijing, April 11, 2017. /VCG Photo
Starbucks delivered record results, increasing global comparable store sales by five percent, consolidated net revenue grew 11 percent to 21.3 billion US dollars, and consolidated operating income grew by 16 percent to 4.2 billion US dollars year-on-year.
The rapid expansion of Starbucks has also contributed to China's booming coffee house market. Mintel estimated that in 2016, sales by China's coffee houses will rise 12 percent from the previous year to 63.6 billion yuan (9.2 billion US dollars).
Starbucks executive chairman Howard Schultz expressed his optimism about the Chinese economy and consumers, saying Starbucks is playing a "long game" and investing heavily in China to build a big and enduring business in the country.
“I believe very strongly in the future of China, the economy and the Chinese consumers. As a result of that, we have been investing heavily, and have been succeeded,” Schultz said.
Based on Starbucks’ annual report, the giant plans to double its number of stores to 5,000 in the next five years, and hopes to profit from the fast evolving coffee market in China. Meanwhile, its first international reserve roastery tasting room in Shanghai is on the way, which is twice the size of the company's first roastery in Seattle, according to Schultz. Howard Schultz, Starbucks Chairman and CEO, speaks at the Annual Meeting of Shareholders in Seattle, Washington, US, March 22, 2017. /VCG Photo
“We thought we'd have to open a roastery in China, given out how important China is to Starbucks. With 2,600 stores in over 120 cities and five million customers, we’ve got to build a roastery. So we are building one that's probably as good as Seattle’s is in Shanghai, and twice the size of Seattle’s roastery.”
But despite a high-end plan for its most important market to-be, Starbucks is also focusing more on mobile opportunities in China, and is even trying to copy China's social gifting model in the US.
“We are off to a phenomenal start with our partnership with Tencent in China with regards to social gifting. The relationship we built with Tencent and the friendship with Jack Ma are all the unique opportunies.”
Since independent online roasters with cheap price tags are popular in China, Schultz noted that independent online roasters are pushing Starbucks to innovate.
“I think that the more independent roasters are successful, better it is for the Starbucks. We are the leader, but we have to continue to learn, and part of learning is innovation. Innovation turns to design, the quality of coffee, and also the people,” Schultz said.
Copyright © 2017