Although industrialization advanced by leaps and bounds in China in recent decades, the agricultural sector still plays a significant role in the world’s most populous country, where about 600 million people – nearly twice the population of the United States – live in rural areas.
In 2016, rural residents in China witnessed promising improvements in their businesses and livelihood, owing to the country’s supply-side structural reform in agriculture and its ambitious urbanization program.
Increase in farmers’ income
China’s rural per capita disposable income reached 12,363 yuan (about 1,800 US dollars) in 2016, up 6.2 percent in real terms – higher than the 5.6 percent growth rate of urban per capita disposable income that year, according to the National Bureau of Statistics (NBS). 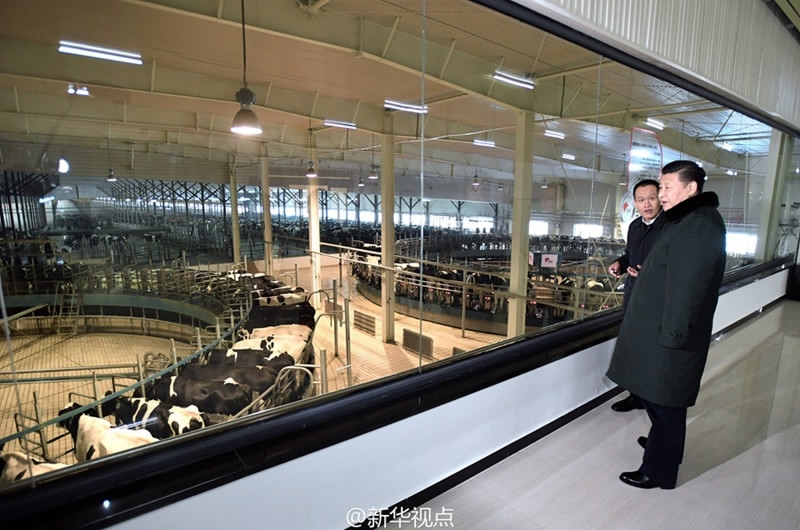 Chinese President Xi Jinping (R) inspects a dairy products manufacturer in Zhangjiakou, Hebei Province in north China on January 24, 2017. /Xinhua Photo
The per capita income of urban households was 2.72 times that of rural households, down from 2.73 times in 2015, NBS data shows.
With the narrowing gap between urban-rural incomes, Chinese farmers saw another bumper harvest last year.
Although China’s grain output dropped 0.8 percent year on year to about 616 million tons in 2016, ending a 12-year rising streak, it was still the second highest year on record.
Meanwhile, the government made efforts to create new growth engines in the agricultural industry and expand the channels through which farmers can increase their income, including promoting e-commerce in rural areas and taking precise, targeted and differentiated measures to ensure effective poverty reduction. 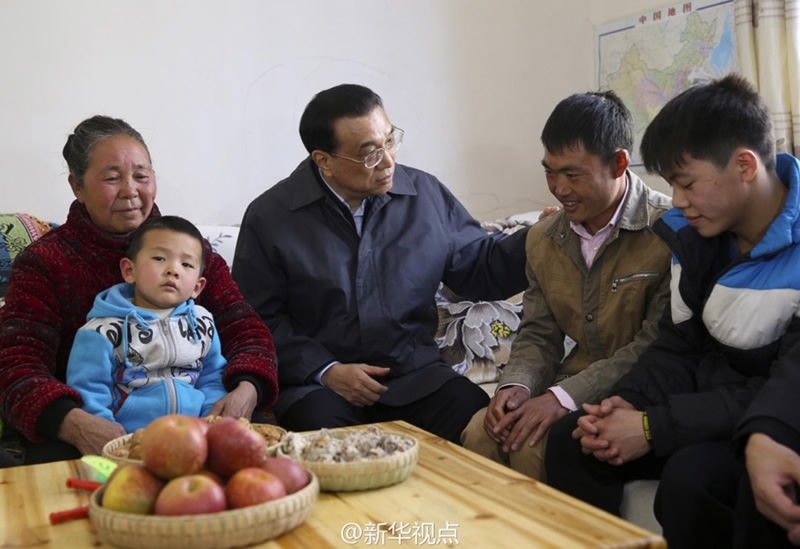 Chinese Premier Li Keqiang (C) visits a migrant worker's home in Ludian County, Yunnan Province in southwest China on January 23, 2017. /Xinhua Photo
According to a five-year blueprint released by the Ministry of Agriculture in September 2016, China will further integrate information technology into agriculture during the period of the 13th Five-Year Plan (2016-2020) to promote the “Internet + modern agriculture” initiative.
In 2016, pilot programs for the use of Internet of Things (IoT) in agriculture kicked off in eight provinces with the introduction of 426 technologies, products and application models. A national data center for agriculture, a national data sub-center for agricultural science and technology and 32 provincial data centers for agriculture were set up, while 33 applications of the industry started operation.
The total online retail volume of agricultural products in 2016 was expected to reach 220 billion yuan (about 32 billion US dollars), a 46 percent increase from 2015, according to the Ministry of Agriculture. 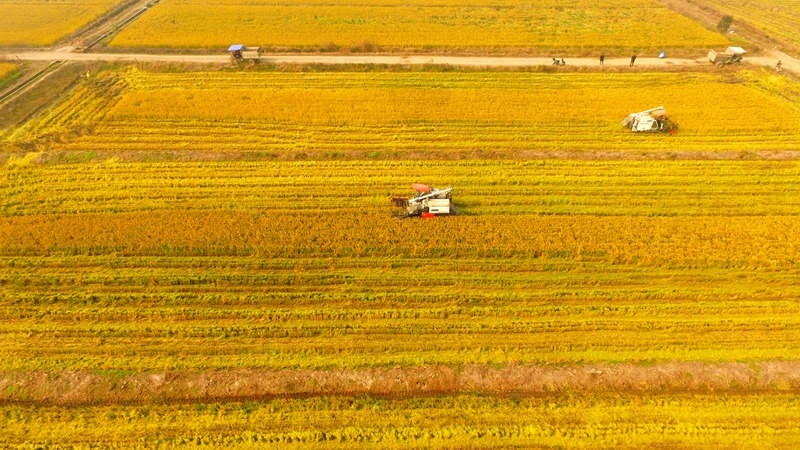 A rice field in Yangzhou, Jiangsu Province in east China on November 6, 2016. /CFP Photo
From August to October last year, the ministry held five workshops on poverty relief for 500 representatives from impoverished villages across the country, who were shown the modernization  process of agricultural enterprises, farmers' cooperatives, family farms and leisure farms in the suburbs of Beijing. The representatives returned home with broadened horizons and know-how to help their neighbors succeed in their businesses.
By the end of 2016, more than 10 million rural residents had been lifted out of poverty, reaching the annual target.
Structural adjustment in agriculture
China sped up structural adjustment in agriculture last year to reduce excess stockpiles of some products, while increasing the supply of other items that still heavily relied on imports, particularly high quality products.
One of the pressing issues in China’s agricultural sector is addressing breed imbalances, as corn supply exceeds demand and imports of soybeans, cotton, oil plants and sugar crops grow on yearly basis 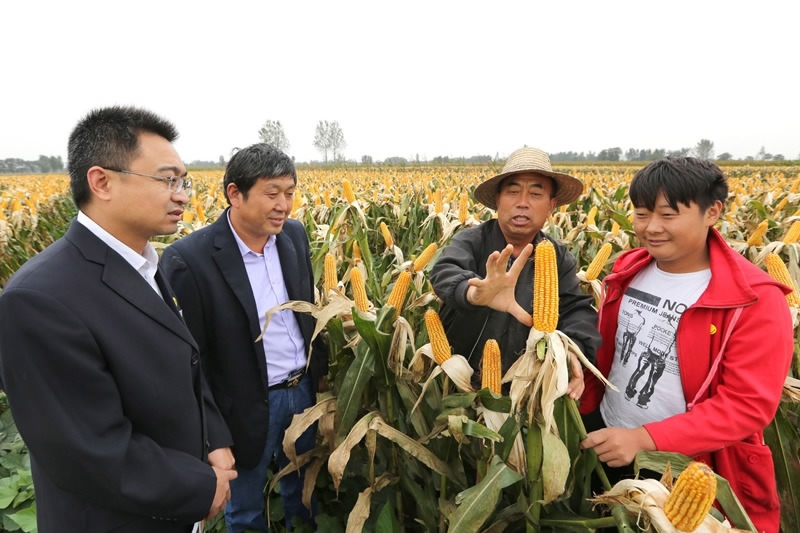 A corn field in Hua County, Henan Province in central China on September 29, 2016. /CFP Photo
“The key to structural reform is to follow market demand and produce the agricultural products that are good for sale,” Chinese Minister of Agriculture Han Changfu said at meeting in December 2016.
China reduced the growing area of corn by two million hectares last year and plans to further reduce it by 666,000 hectares in 2017, said Han.
In the meantime, the country increased the cultivation area of soybeans by more than 600,000 hectares.
Efforts were also made to adjust the structure of livestock and fishing industries, with emphasis on the improvement of food quality.
China’s top 20 dairy enterprises held a summit last August amid efforts to boost the competitiveness of domestic dairy products and revitalize the industry, whose reputation was severely damaged by a poisonous milk powder scandal in 2008.
People-centered urbanization
As an important part of China’s people-centered urbanization drive, also known as the New Urbanization Plan, around 100 million people with rural household registration, or hukou, living in urban areas and other permanent urban residents will be granted urban hukou by 2020, raising the urbanization rate to 60 percent and the proportion of people with urban hukou to 45 percent. In September 2016, the General Office of the State Council released a scheme to push forward the program. 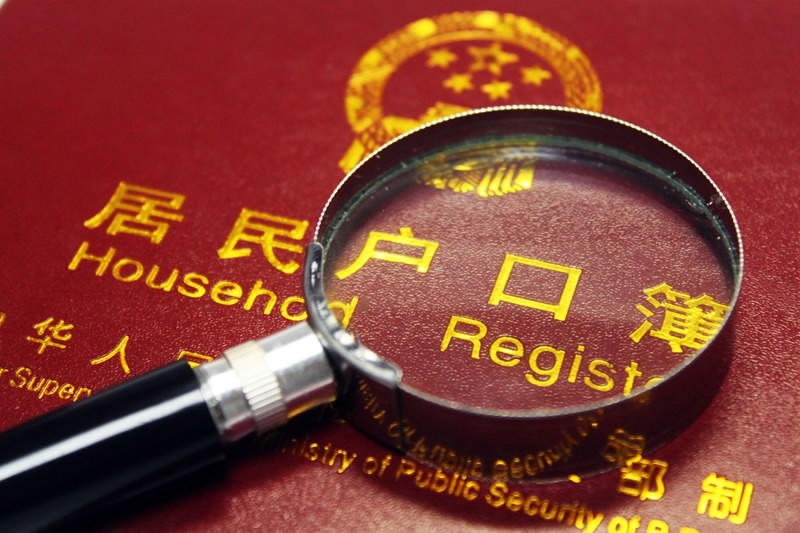 The hukou system in China grants people access to a wide range of public services from education to healthcare wherever they are registered. /CFP Photo
Under China’s current hukou registration system, urban hukou holders have better access to a range of basic public services in cities. So granting urban hukou to people coming from the countryside, like migrant workers, is both significant for those involved and for the country’s push to build a moderately prosperous society in all respects.
According to NBS data, the number of permanent urban residents had reached 793 million by the end of 2016, an increase of nearly 22 million compared with the year before, while the urbanization rate had risen to 57.35 percent. Meanwhile, the proportion of urban hukou holders accounted for 41.2 percent of the population, according to data from the Ministry of Public Security. Both figures show strong headway towards the targets set in the 13th Five-Year Plan.
In addition, Chinese cities granted more than 28.9 million residence cards to urban residents without local hukou, including about 1.69 million in Beijing, 406,000 in Shanghai, 810,000 in Guangzhou and 1.72 million in Shenzhen. The residence cards enable their holders to enjoy the right to access compulsory education, employment, medical care and other public services in the cities.

Farmers in China have witnessed great changes in 2016. /CGTN Photo
The government also made huge investment in infrastructure construction in rural areas such as building new roads and upgrading power grids, technological advancement in farming and green agriculture in 2016, while deepening the reform of the rural collective property rights system. Such efforts have contributed to the modernization of agriculture, the development of rural areas and the well-being of farmers in China.
Copyright © 2017