Analysis: Five forces that can keep Trump in check
POLITICS
By Wang Lei

Donald Trump has been making a series of aggressive and controversial remarks and moves, both in the lead up to and since his inauguration as the 45th president of the United States on January 20, 2017.
Among them, the executive order banning citizens of seven Muslim-majority countries from entering the US, the phone call with Taiwan leader Tsai Ing-wen, the order to build a border wall between America and Mexico, the criticism of German Chancellor Angela Merkel and the abrupt ending of a telephone conversation with Australian Prime Minister Malcolm Turnbull all sparked heated controversy both in the US and across the globe.
As Trump wasted no time in fulfilling his campaign promises to “put America first”, are there forces to check and balance the assertive president, and put a rein on him when he goes too far?
The answer is yes.
Force I: The court
US District Senior Judge James Robart issued a temporary restraining order Friday night that immediately lifted Trump’s Muslim ban. Trump fought back and wrote on Twitter: “The judge opens up our country to potential terrorists and others that do not have our best interests at heart. Bad people are very happy!” 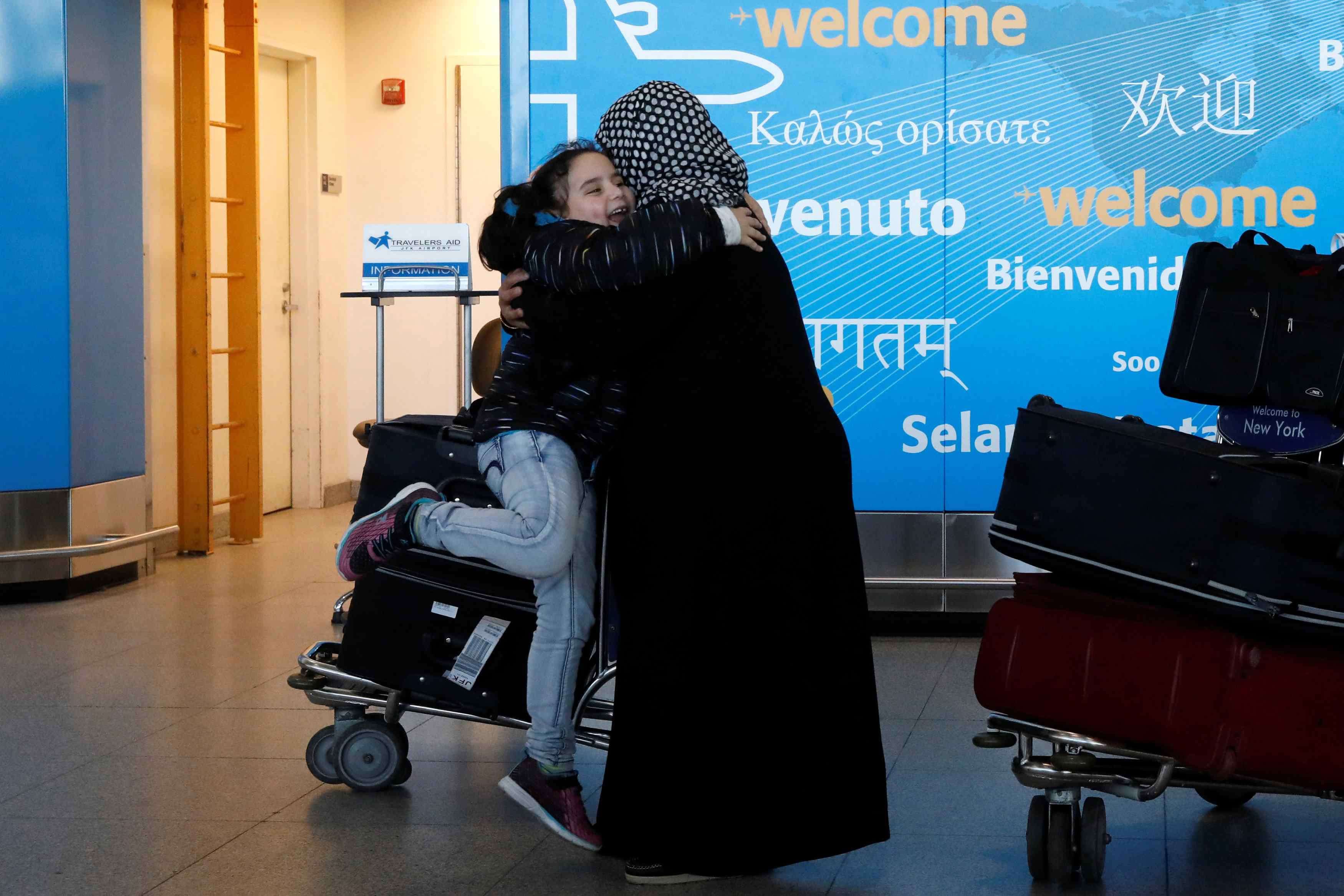 International travelers are greeted as they arrive at J. F. Kennedy International Airport in New York City, February 4, 2017. /Reuters Photo
Commenting on the battle over the ban, CNN said, “Trump is facing his first run-in with a system of federal checks and balances.” The report indicated that the rapid halting of Trump’s immigration order “has given him his first exposure to the limits on his presidential power”.
Force II: The media
Trump has been officially at war with the media since his inauguration, when the new president labeled media professionals “among the most dishonest human beings on earth”.
“I have a running war with the media,” Trump said on January 21, accusing the media of fabricating his tensions with the intelligence community.
In the meantime, Trump claimed that it “looked like a million and a half people” had attended his inauguration, criticizing the media for indicating his inauguration ceremony saw a much lower attendance than that of Barack Obama in 2009. 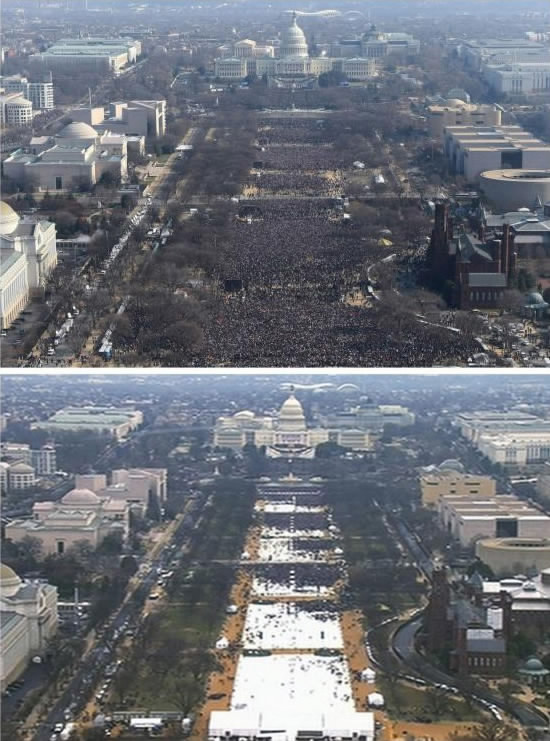 This pair of photos show a view of the crowd on the National Mall at the inaugurations of President Barack Obama, above, on January 20, 2009, and President Donald Trump, below, on January 20, 2017. /Reuters Photo
Facing checks and balances by the media on a whole range of disputed issues, Trump has consistently taken to Twitter to fight back. Britain’s Financial Times said that Trump’s frequent use of social media reflects his intention “to both circumvent the mainstream media and influence its coverage of him”.
Force III: The public
People in both the US and other parts of the world have launched protests against Trump’s controversial remarks on women and his Muslim ban.
On his first full day in the White House, President Trump heard the voice of protesters united as one. A sea of women in so-called “pussyhats” poured into the streets of downtown Washington DC, painting the US capital pink, as they joined millions in sister rallies across the world to protest against Trump. The demonstrators' hats referred to Trump's crude remarks made in a 2005 Access Hollywood tape, which was leaked a month before the presidential election. 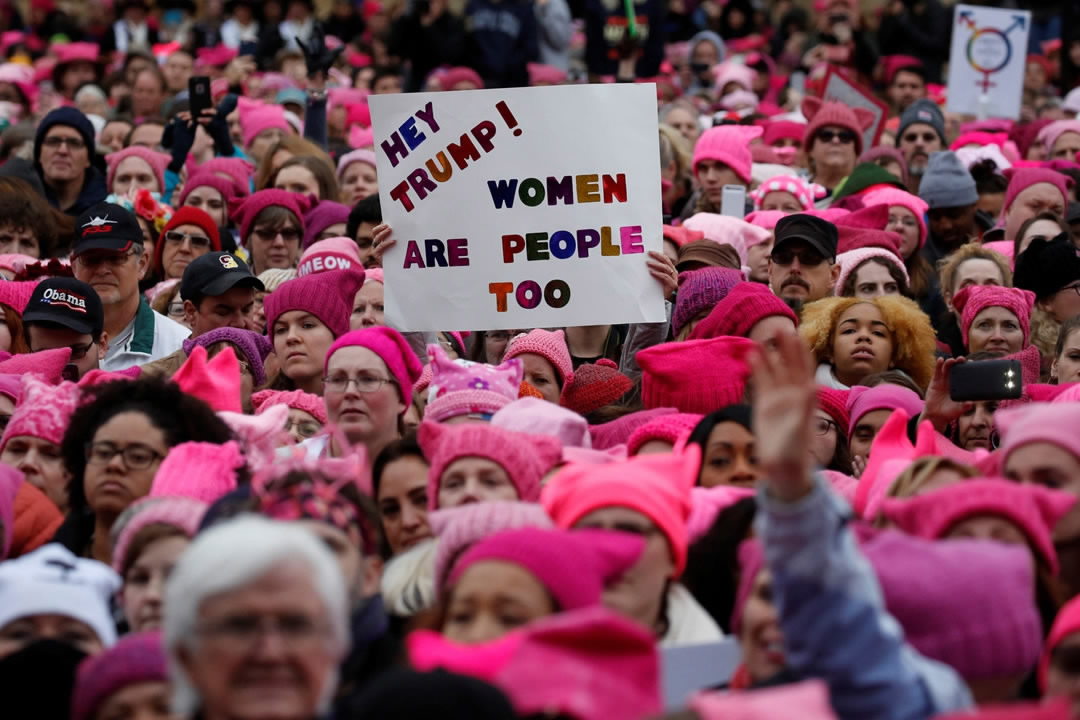 Women in pink "pussyhats" protest against Donald Trump in Washington DC on January 21, 2017. /CFP Photo
During the past two weeks, Americans and people in many other countries such as Britain, Yemen and Sudan took to the streets to protest against Trump’s Muslim ban. According to The Huffington Post, thousands of people joined a rally outside the White House on Saturday, holding signs including “We bombed them, now we ban them,” and “Instead of being afraid of brown people, we should be more concerned over orange monster.” 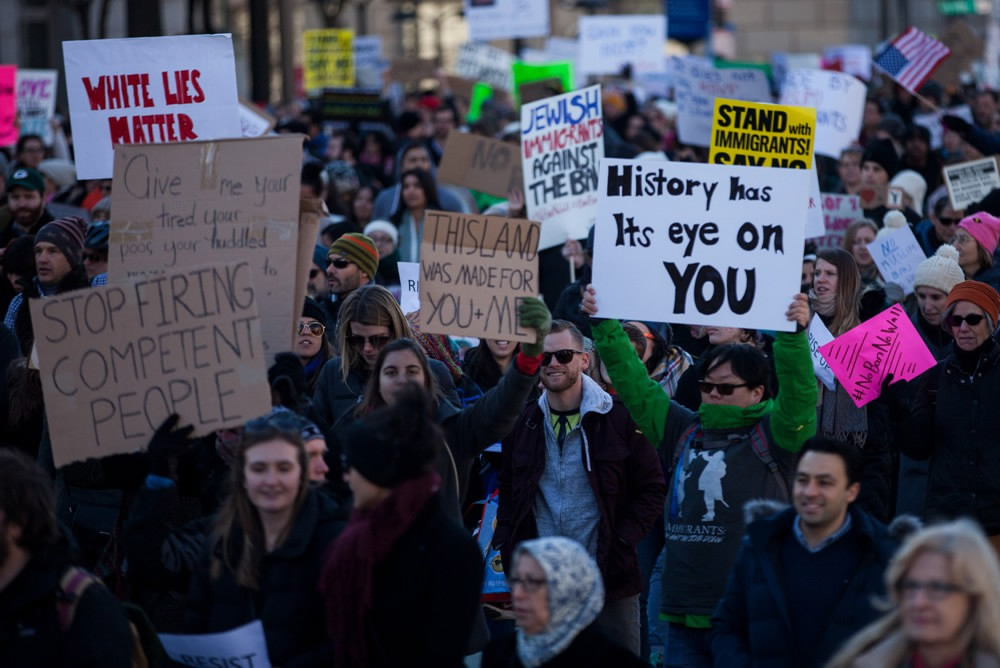 Demonstrators march from the White House to the Capitol Hill in Washington, DC on February 4, 2017. /CFP Photo
Trump, who lost the popular vote to Democrat nominee Hillary Clinton by nearly three million votes in the presidential election, continues to receive record high disapproval ratings compared to his predecessors. Two weeks into his presidency, 53 percent of people disapprove of how Trump is handling the job, while just 44 percent approve, according to a CNN/ORC poll released Friday. The poll, which took place over the period from January 31 to February 2, was a phone survey of 1,002 randomly selected people.
Force IV: Domestic and international politics
As a businessman-turned-Republican president, Trump has done little to make friends at home and abroad.
As soon as he entered the White House, he started to dismantle the most important legacy of the Democratic administration – Obamacare, despite strong opposition from many Democrats and ordinary citizens.
Regarding the Muslim ban, former President Obama criticized Trump in a statement last Monday, saying that he “fundamentally disagrees” with the immigration order.
With, according to CNN, the highest disapproval rating for a newly elected president since records began, Trump faces tough battles ahead to mend the divisions in American politics.
Trump has also caused diplomatic strains with many countries around the world. Take Sino-US relations for example. Trump has already challenged China on various fronts such as the one-China policy, South China Sea, trade and currency, while China made clear that its core interests cannot be challenged and that its sovereignty over its territory is non-negotiable. 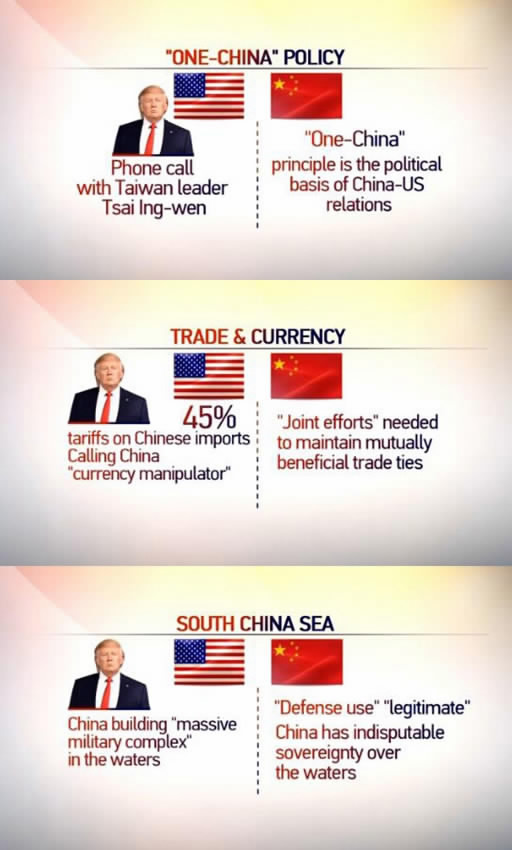 Donald Trump has tested China’s limits on a number of issues. /CGTN Photo
The US president has even dealt with traditional allies in an unfriendly manner, slamming German Chancellor Merkel’s refugee policy, abruptly hanging up a phone call with Australia's PM Turnbull over a refugee resettlement deal and accusing the EU, Japan and South Korea of benefiting from a US security umbrella without sharing enough of the costs.
Force V: Economy
Though America is the world's largest economy, it still needs to work with other countries to stay prosperous in an economically interdependent world, no matter how desperately Trump wants to “bring back jobs” to the US.
Trump has slammed China for stealing US jobs on various occasions. However, reports from several American research companies show Chinese investment has helped the US boost employment over the past decade.
According to a Rhodium Group report, Chinese investment into the US reached 109.5 billion US dollars from 2000 to the fourth quarter of 2016 – with 1,360 deals being made. In terms of job creation, the Rhodium Group says that Chinese companies created over 80,000 employment positions in the US from 2000 to 2014. The number is expected to rise to between 200,000 and 400,000 by 2020, with increasing amounts of Chinese capital flowing to the country. 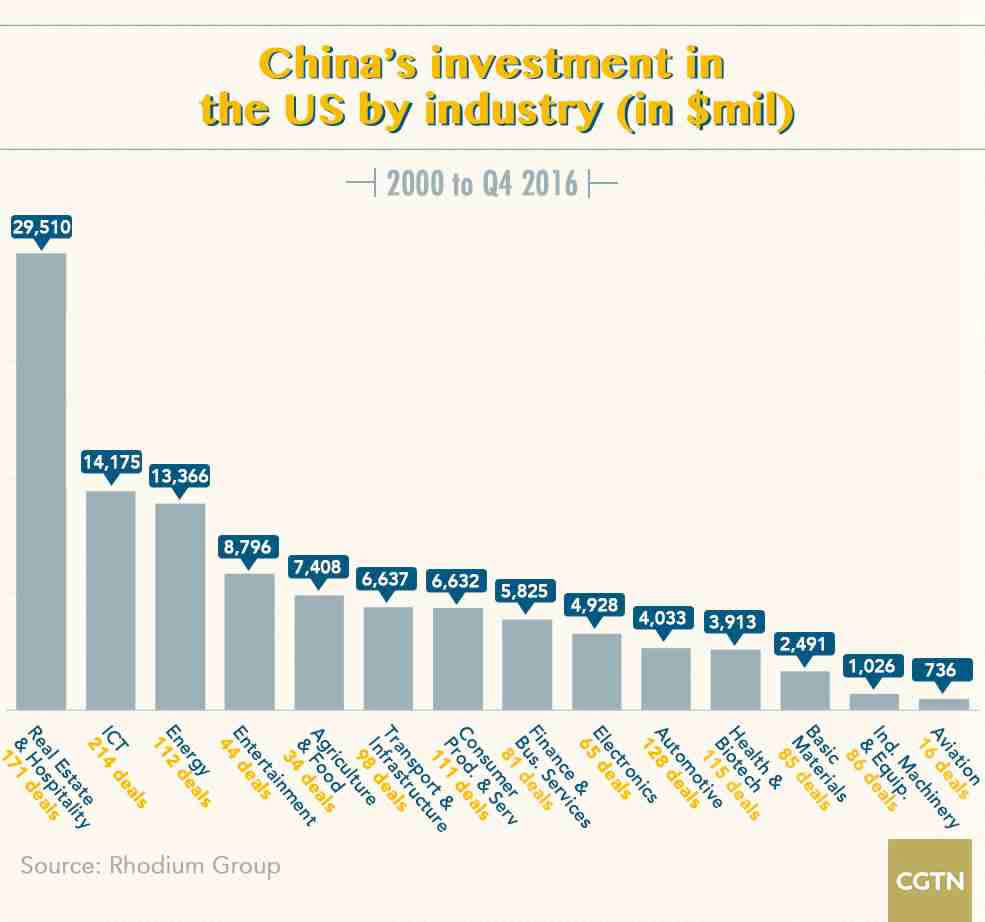 CGTN Photo
The examples mentioned above are only the tip of the iceberg that Trump should take care to avoid. With tremendous leverage held by US courthouses, the media, the public, political opponents and the international community, as well as America’s economic dependence on other nations, Trump, the most prominent figure in the world's most powerful country, may be far weaker than he appears.
(Written by CGTN’s Wang Lei)
Copyright © 2017