Opinion: How can African countries get the most from Belt and Road?
POLITICS
By Zhang Yu

Guest commentary by Hannah Ryder
Living in China, it’s been impossible to miss the country’s first ever Belt and Road Forum (BRF). The forum concluded on Monday, with outputs including a detailed declaration and numerous -- over 270 -- bilateral deals in areas such as infrastructure, manufacturing and services.
As was articulated recently by the head of the UN in China, the declaration and deals could be crucial to stimulating global development and poverty reduction. But to ensure they really do so from now on will depend less on China’s planning and execution, and increasingly on what China’s Belt and Road partner governments do.
To date, the way that governments have engaged with Chinese actors -- from government ministries to small-scale entrepreneurs -- is extremely varied. I’ve recently been working with a boutique consultancy China Africa Advisory to explore in-depth how Chinese actors are operating within some key African countries. We found three particularly interesting cross-country comparisons. 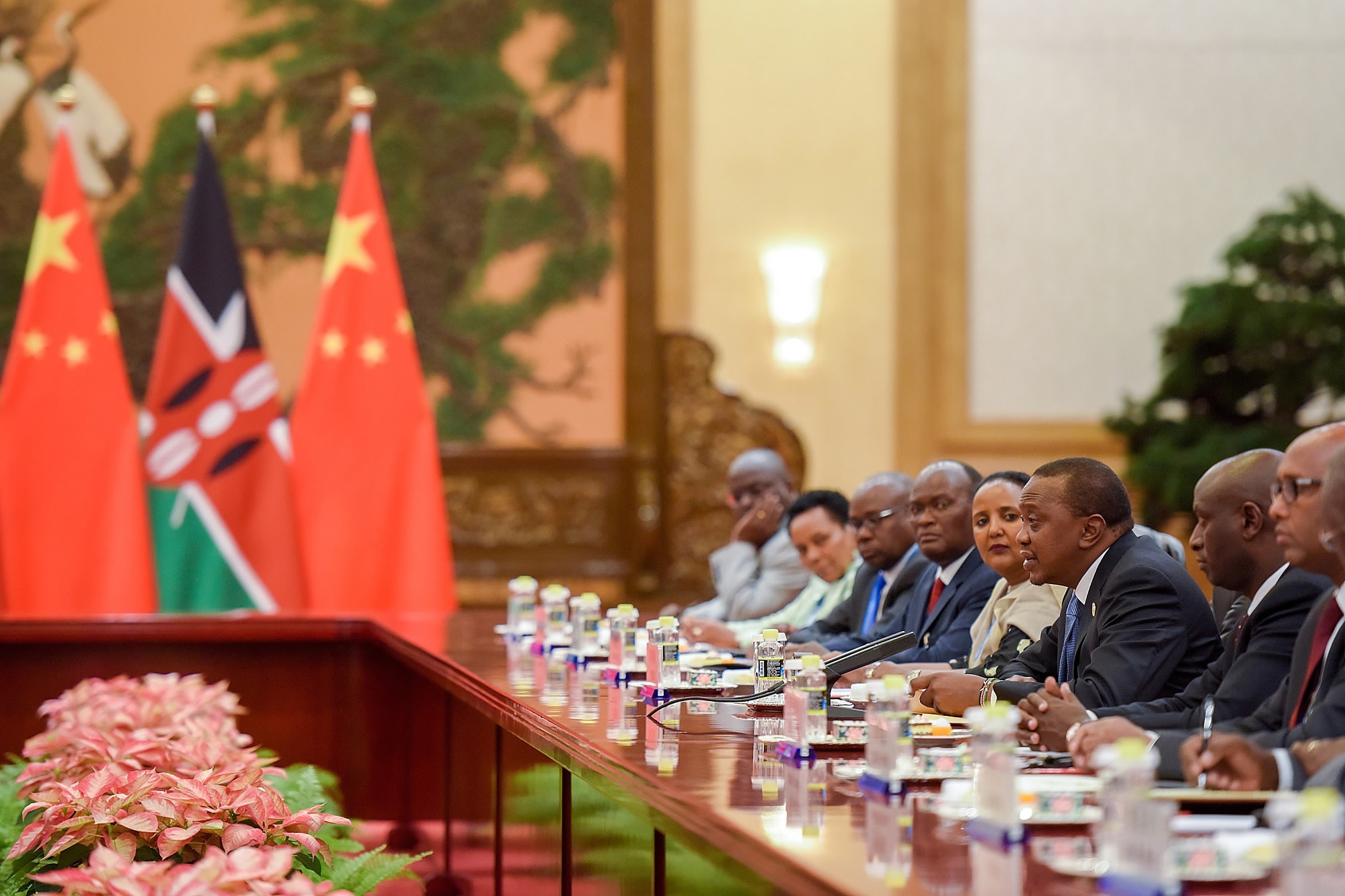 Kenyan President Uhuru Kenyatta (3rd R) speaks during his bilateral meeting with Chinese President Xi Jinping (not pictured) during the Belt and Road Forum. /CFP Photo
First, we found that the African countries that have attracted more Chinese companies and non-governmental organisations -- for example to manage special economic zones, large infrastructure or agricultural projects -- already have several Memorandums of Understanding (MoU’s) with various Chinese counterparts. The MoU’s seem to act as some kind of “gateway.” For instance, Kenya has at least 17 MoUs with Chinese government counterparts, but nearby Tanzania and Mozambique each have less than 10 such agreements. Until last week’s BRF, only Egypt and South Africa had signed high-level MoU’s with China to develop the Belt and Road Initiative in their respective countries, now Kenya and Ethiopia can be added to that list. Just four African countries -- Egypt, South Africa, Sudan and Ethiopia -- are formal members of one of the key Belt and Road financing vehicle, the Asian Infrastructure Investment Bank (AIIB).
Second, we found that Chinese engagement seems undeterred by countries that really champion the interests of their own citizens. The “win-win” rhetoric can play out in reality. For instance, African countries with strong domestic labor laws seemed to have a lower ratio of Chinese to local labor when Chinese companies deliver infrastructure and other contracted projects. This is in a context where, in 2015, according to official statistics, almost 40 percent of all Chinese migrants working on infrastructure or other contracted projects overseas went to the African continent. Creating local jobs for construction projects and longer-term investment is crucial, as most young Africans remain formally unemployed.
Third, our research suggested that even countries not doing well can benefit from Belt and Road finance. Of course, some Overseas Direct Investment (ODI) from China is -- like many other investors -- associated with high economic growth. As shown in a recent Johns Hopkins University briefing, investment into Tanzania, Ghana and Kenya are key examples of Chinese investment destinations that have been growing by over 6 percent per year. However, unlike many other investors, Chinese ODI can weather economic or political risks. Take South Africa for example, which has a “Comprehensive Strategic Partnership” with China. Since at least 2003, South Africa has regularly ranked in the top five African countries attracting Chinese ODI. Growth in South Africa is declining, but Chinese investment has continued to rise. Zimbabwe, Angola, the Democratic Republic of Congo -- countries with notoriously difficult political environments that typically feature at the bottom of global competitiveness indices -- have all been key destinations for not just loans but significant non-financial Chinese investment over the past decade. 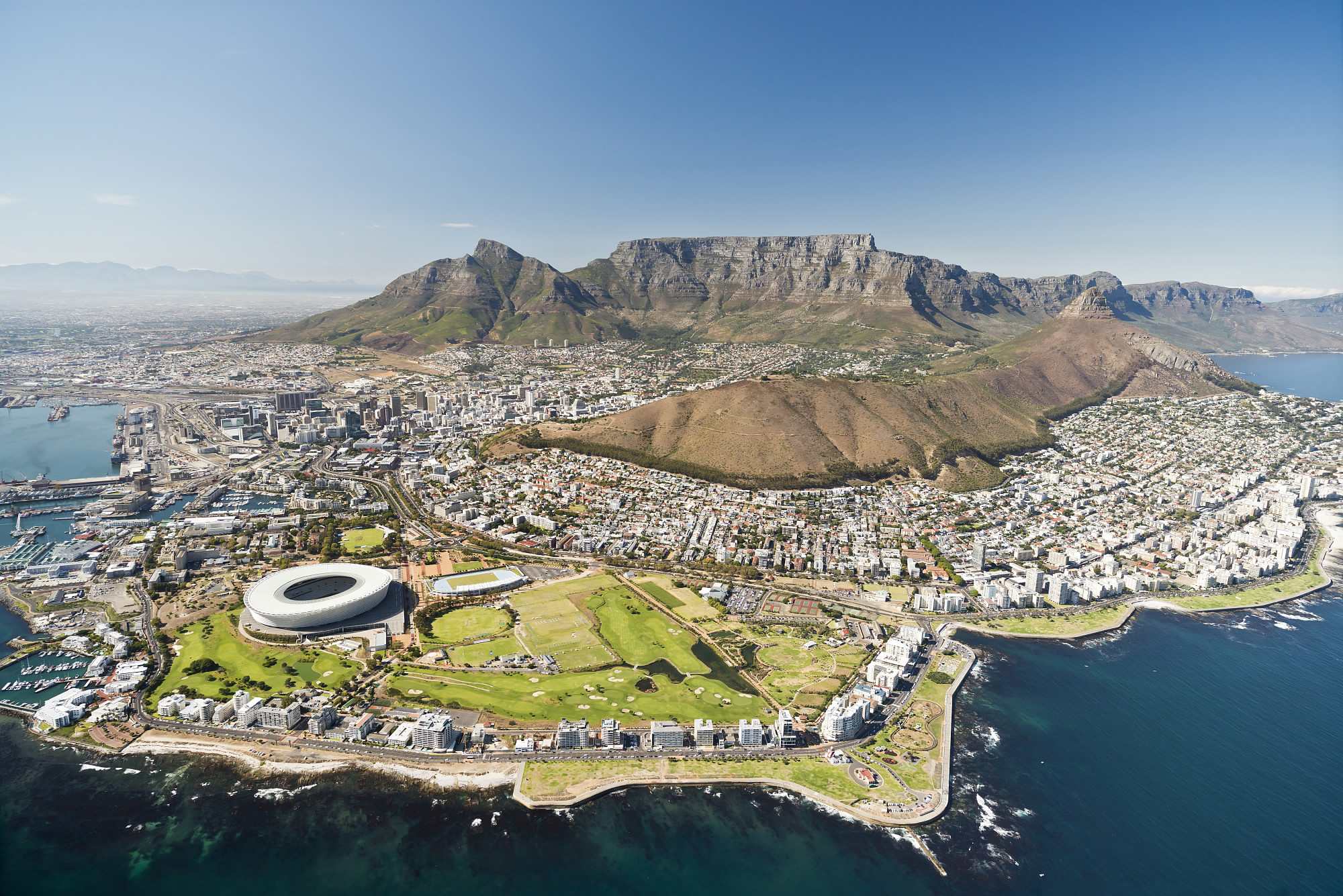 South Africa, aerial view of Cape Town. /CFP Photo
So what do these three findings imply? Overall, if governments participating in the Belt and Road Initiative want it to truly and rapidly meet their countries’ interests, this evidence suggests they need to quickly focus on China as a specific development partner and proactively manage and direct relationships with a myriad of Chinese partners.
Indeed, for China, the Belt and Road Initiative operates as the government’s strategic management plan for its global footprint. It provides a logical framework for China’s negotiations with other countries. If China has a strategic management plan, then others should too.
What might such strategic management by Belt and Road countries entail? I would suggest four steps, derived from our findings.
The first is for each government to have an in-depth “Belt and Road plan” that sets out explicitly what its citizens want from Chinese actors, linked to the country’s broad development plan. The Belt and Road plan can also perform a due diligence function -- for instance exploring best practice relationships of neighboring or other countries at a similar level of development with China.
The second step is to use their embassy in China to proactively seek out Chinese actors that might help deliver this “Belt and Road plan.” Organizations such as the China-Africa Business Council and others can help facilitate such searches and introductory meetings.
The third step requires confidence -- negotiating clear, best practice MoUs and contracts. I have written previously about the bargaining power that poorer countries now have vis-a-vis China.
And last but not least, governments should engage others at home -- such as non-governmental organizations -- to enforce, monitor and regularly review the outcomes of the China relationship, for example in relation to labor or environmental performance.
If Belt and Road governments do not now negotiate and work with China in a proactive manner, they may simply be unable to begin practical cooperation, or there will be sporadic cooperation that does not align with development plans. Neither of these outcomes will help the poorest people around the world -- nor will they help China, who would like to see itself having a positive global footprint.
China has successfully planned and executed the first ever Belt and Road Forum. It’s time now for those countries along its sea and land routes and beyond to confidently and quickly put in place and execute their own Belt and Road plans.
(Hannah Ryder, is a Kenyan and British diplomat, economist and writer. She is focused on development, China and climate change. The article reflects the author's opinion, and does not necessarily represent the view of CGTN.)
Copyright © 2017