The following is the full text of the keynote speech given by Chinese President Xi Jinping at the opening ceremony of the Belt and Road Forum for International Cooperation in Beijing on May 14:
Work Together to Build the Silk Road Economic Belt and The 21st Century Maritime Silk Road
In this lovely season of early summer when every living thing is full of energy, I wish to welcome all of you, distinguished guests representing over 100 countries, to attend this important forum on the Belt and Road Initiative held in Beijing. This is indeed a gathering of great minds. In the coming two days, I hope that by engaging in full exchanges of views, we will contribute to pursuing the Belt and Road Initiative, a project of the century, so that it will benefit people across the world. 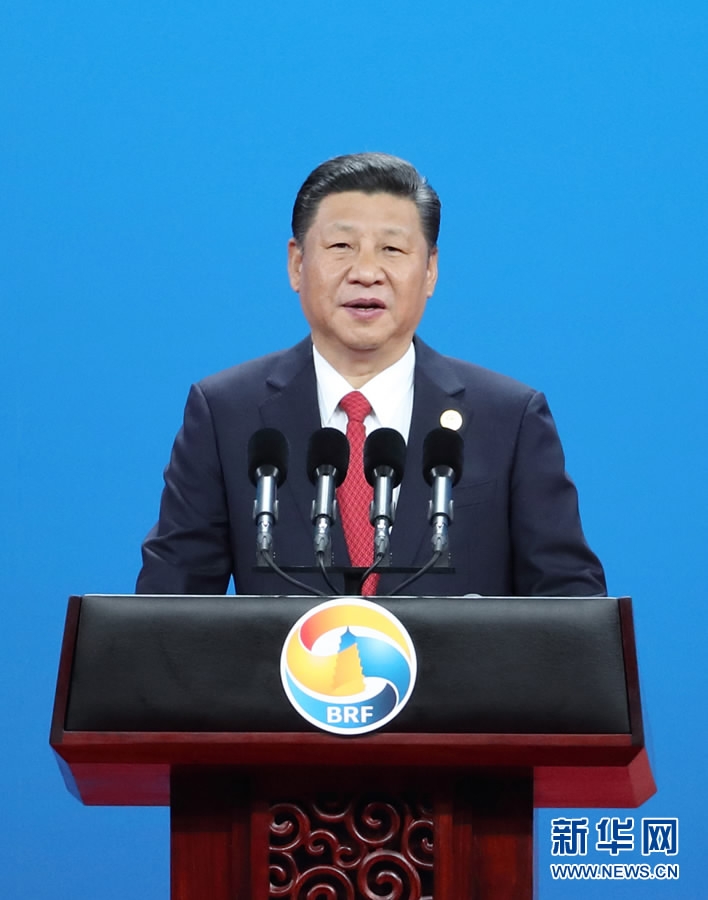 Chinese President Xi Jinping delivers his keynote speech during the opening ceremony of the Belt and Road Forum at the China National Convention Center in Beijing on May 14, 2017. /Xinhua Photo
Ladies and Gentlemen,
Dear Friends,
Over 2,000 years ago, our ancestors, trekking across vast steppes and deserts, opened the transcontinental passage connecting Asia, Europe and Africa, known today as the Silk Road. Our ancestors, navigating rough seas, created sea routes linking the East with the West, namely, the maritime Silk Road. These ancient silk routes opened windows of friendly engagement among nations, adding a splendid chapter to the history of human progress. The thousand-year-old “gilt bronze silkworm” displayed at China’s Shaanxi History Museum and the Belitung shipwreck discovered in Indonesia, bear witness to this exciting period of history.
Spanning thousands of miles and years, the ancient silk routes embody the spirit of peace and cooperation, openness and inclusiveness, mutual learning and mutual benefit. The Silk Road spirit has become a great heritage of human civilization.
— Peace and cooperation. In China’s Han Dynasty around 140 B.C., Zhang Qian, a royal emissary, left Chang’an, capital of the Han Dynasty. He traveled westward on a mission of peace and opened an overland route linking the East and the West, a daring undertaking which came to be known as Zhang Qian’s journey to the Western regions. Centuries later, in the years of the Tang, Song and Yuan Dynasties, such silk routes, both over land and at sea, boomed. Great adventurers, including Du Huan of China, Marco Polo of Italy and Ibn Batutah of Morocco, left their footprints along these ancient routes. In the early 15th century, Zheng He, the famous Chinese navigator in the Ming Dynasty, made seven voyages to the Western Seas, a feat which still is remembered today. These pioneers won their place in history not as conquerors with warships, guns or swords. Rather, they are remembered as friendly emissaries leading camel caravans and sailing treasure-loaded ships. Generation after generation, the silk routes' travelers have built a bridge for peace and East-West cooperation.
— Openness and inclusiveness. The ancient silk routes spanned the valleys of the Nile, the Tigris and Euphrates, the Indus and Ganges and the Yellow and Yangtze Rivers. They connected the birthplaces of the Egyptian, Babylonian, Indian and Chinese civilizations as well as the lands of Buddhism, Christianity and Islam and homes of people of different nationalities and races. These routes enabled people of various civilizations, religions and races to interact with and embrace each other with open mind. In the course of exchange, they fostered a spirit of mutual respect and were engaged in a common endeavor to pursue prosperity. Today, the ancient cities of Jiuquan, Dunhuang, Turpan, Kashgar, Samarkand, Baghdad and Constantinople as well as the ancient ports of Ningbo, Quanzhou, Guangzhou, Beihai, Colombo, Jeddah and Alexandria stand as living monuments to these past interactions. This part of history shows that civilization thrives with openness and nations prosper through exchange.
— Mutual learning. The ancient silk routes were not for trade only, they boosted the flow of knowledge as well. Through these routes, Chinese silk, porcelain, lacquerwork and ironware were shipped to the West, while pepper, flax, spices, grape and pomegranate entered China. Through these routes, Buddhism, Islam and Arab astronomy, calendar and medicine found their way to China, while China’s Four Great Inventions and silkworm breeding spread to other parts of the world. More importantly, the exchange of goods and know-how spurred new ideas. For example, Buddhism originated in India, blossomed in China and was enriched in Southeast Asia. Confucianism, which was born in China, gained appreciation by European thinkers such as Leibniz and Voltaire. Herein lies the appeal of mutual learning.
— Mutual benefit. The ancient silk routes witnessed the bustling scenes of visits and trade over land and ships calling at ports. Along these major arteries of interaction, capital, technology and people flowed freely, and goods, resources and benefits were widely shared. The ancient prosperous cities of Alma-Ata, Samarkand and Chang’an and ports of Sur and Guangzhou thrived, so did the Roman Empire as well as Parthia and Kushan Kingdoms. The Han and Tang Dynasties of China entered the golden age. The ancient silk routes brought prosperity to these regions and boosted their development.
History is our best teacher. The glory of the ancient silk routes shows that geographical distance is not insurmountable. If we take the first courageous step towards each other, we can embark on a path leading to friendship, shared development, peace, harmony and a better future. 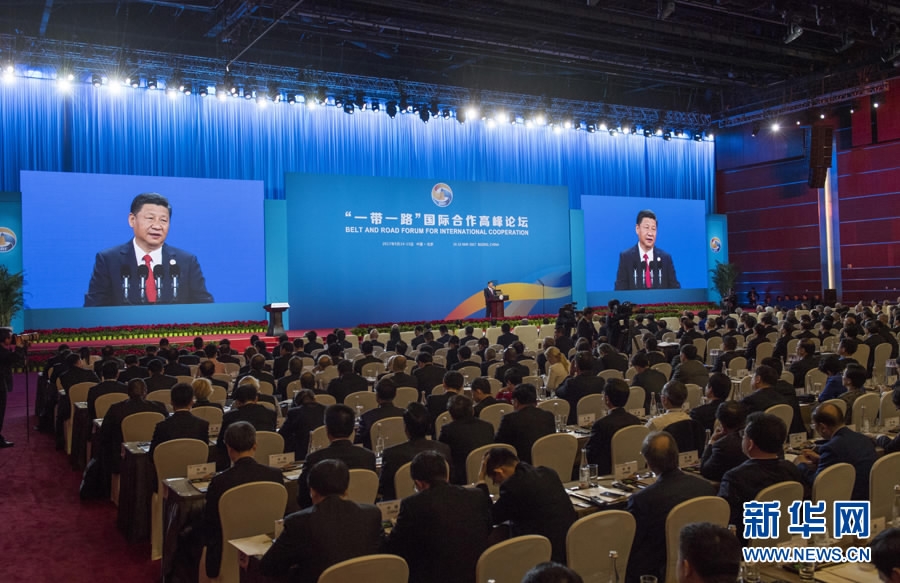 Chinese President Xi Jinping delivers his speech at the opening ceremony of the Belt and Road Forum in Beijing on May 14, 2017. /Xinhua Photo
Ladies and Gentlemen,
Dear Friends,
From the historical perspective, humankind has reached an age of great progress, great transformation and profound changes. In this increasingly multi-polar, economically globalized, digitized and culturally diversified world, the trend toward peace and development becomes stronger, and reform and innovation are gaining momentum. Never have we seen such close interdependence among countries as today, such fervent desire of people for a better life, and never have we had so many means to prevail over difficulties.
In terms of reality, we find ourselves in a world fraught with challenges. Global growth requires new drivers, development needs to be more inclusive and balanced, and the gap between the rich and the poor needs to be narrowed. Hotspots in some regions are causing instability and terrorism is rampant. Deficit in peace, development and governance poses a daunting challenge to mankind. This is the issue that has always been on my mind.
In the autumn of 2013, respectively in Kazakhstan and Indonesia, I proposed the building of the Silk Road Economic Belt and the 21st Century Maritime Silk Road, which I call the Belt and Road Initiative. As a Chinese saying goes, “Peaches and plums do not speak, but they are so attractive that a path is formed below the trees.” Four years on, over 100 countries and international organizations have supported and got involved in this initiative. Important resolutions passed by the UN General Assembly and Security Council contain reference to it. Thanks to our efforts, the vision of the Belt and Road Initiative is becoming a reality and bearing rich fruit.
— These four years have seen deepened policy connectivity. I have said on many occasions that the pursuit of the Belt and Road Initiative is not meant to reinvent the wheel. Rather, it aims to complement the development strategies of countries involved by leveraging their comparative strengths. We have enhanced coordination with the policy initiatives of relevant countries, such as the Eurasian Economic Union of Russia, the Master Plan on ASEAN Connectivity, the Bright Road initiative of Kazakhstan, the Middle Corridor initiative of Turkey, the Development Road initiative of Mongolia, the Two Corridors, One Economic Circle initiative of Vietnam, the Northern Powerhouse initiative of the UK and the Amber Road initiative of Poland. We are also promoting complementarity between China’s development plan and those of Laos, Cambodia, Myanmar, Hungary and other countries. China has signed cooperation agreements with over 40 countries and international organizations and carried out framework cooperation on production capacity with more than 30 countries. During the forum, a number of cooperation agreements on policy connectivity and action plans will be signed. We will also launch Belt and Road cooperation initiative on trade connectivity together with some 60 countries and international organizations. Such policy connectivity will produce a multiplying effect on cooperation among the parties involved.
— These four years have seen enhanced infrastructure connectivity. Building roads and railways creates prosperity in all sectors. We have accelerated the building of the Jakarta-Bandung high-speed railway, China-Laos railway, Addis Ababa-Djibouti railway and Hungary-Serbia railway, and upgraded Gwadar and Piraeus ports in cooperation with relevant countries. A large number of connectivity projects are also in the pipeline. Today, a multi-dimensional infrastructure network is taking shape, one that is underpinned by economic corridors such as China-Pakistan Economic Corridor, China-Mongolia-Russia Economic Corridor and the New Eurasian Continental Bridge, featuring land-sea-air transportation routes and information expressway, and supported by major railway, port and pipeline projects.
— These four years have seen increased trade connectivity. China has worked with other countries involved in the Belt and Road Initiative to promote trade and investment facilitation and improve business environment. I was told that for Kazakhstan and other Central Asian countries alone, customs clearance time for agricultural produce exporting to China is cut by 90 percent. Total trade between China and other Belt and Road countries in 2014-2016 has exceeded 3 trillion US dollars, and China’s investment in these countries has surpassed 50 billion US dollars. Chinese companies have set up 56 economic cooperation zones in over 20 countries, generating some 1.1 billion US dollars of tax revenue and 180,000 jobs for them.
— These four years have seen expanded financial connectivity. Financing bottleneck is a key challenge to realizing connectivity. China has engaged in multiple forms of financial cooperation with countries and organizations involved in the Belt and Road Initiative. The Asian Infrastructure Investment Bank has provided 1.7 billion US dollars of loans for 9 projects in Belt and Road participating countries. The Silk Road Fund has made 4 billion US dollars of investment, and the 16+1 financial holding company between China and Central and Eastern European countries has been inaugurated. With distinctive focus, these new financial mechanisms and traditional multilateral financial institutions such as the World Bank complement each other. A multi-tiered Belt and Road financial cooperation network has taken an initial shape.
— These four years have seen strengthened people-to-people connectivity. Friendship, which derives from close contact between the people, holds the key to sound state-to-state relations. Guided by the Silk Road spirit, we the Belt and Road Initiative participating countries have pulled our efforts to build the educational Silk Road and the health Silk Road, and carried out cooperation in science, education, culture, health and people-to-people exchange. Such cooperation has helped lay a solid popular and social foundation for pursuing the Belt and Road Initiative. Every year, the Chinese government provides 10,000 government scholarships to the relevant countries. China’s local governments have also set up special Silk Road scholarships to encourage international cultural and educational exchanges. Projects of people-to-people cooperation such as Silk Road culture year, tourism year, art festivals, films and TV projects, seminars and think tank dialogue are flourishing. These interactions have brought our people increasingly closer.
These fruitful outcomes show that the Belt and Road Initiative responds to the trend of the times, conforms to the law of development, and meets the people’s interests. It surely has broad prospects. 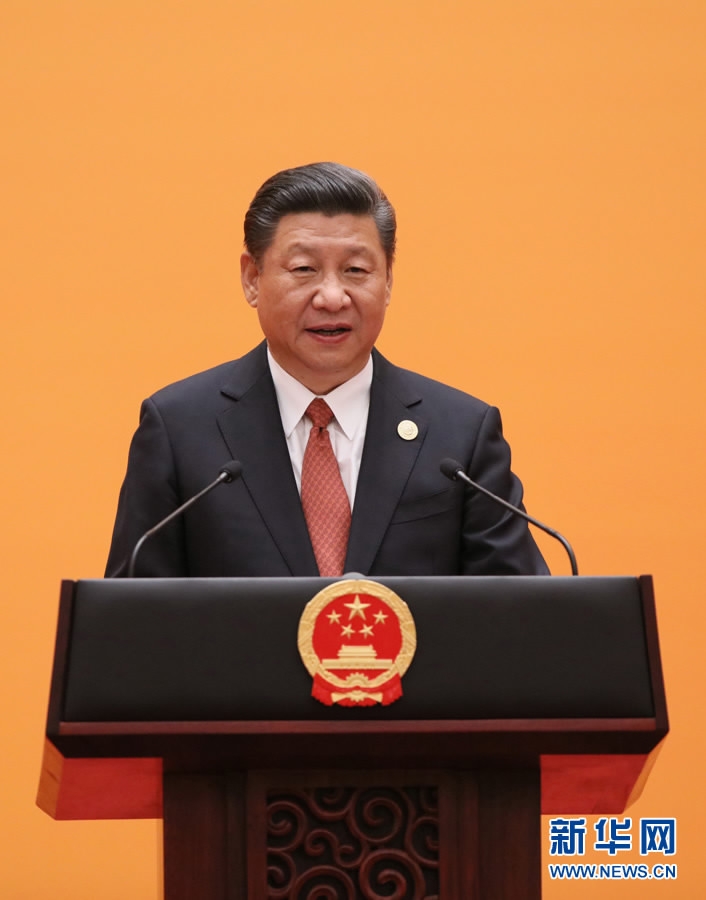