Opinion: The sky is the limit for China and Israel
POLITICS
By Li Kun

Guest commentary by Meir Javedanfar
Looking at the current levels of bilateral trade between Israel and China, it is difficult to believe that the two countries only established diplomatic relations 25 years ago.
Today, on top of diplomatic relations, China is Israel's biggest trading partner in Asia, and its third largest worldwide. Bilateral trade between them stands at 11 billion US dollars. This is a major leap when we consider the fact that in 1992, the bilateral trade figure stood at a mere 50 million US dollars. Should the two countries manage to successfully conclude the current ongoing negotiations over a free trade agreement, trade between them could reach even higher levels. 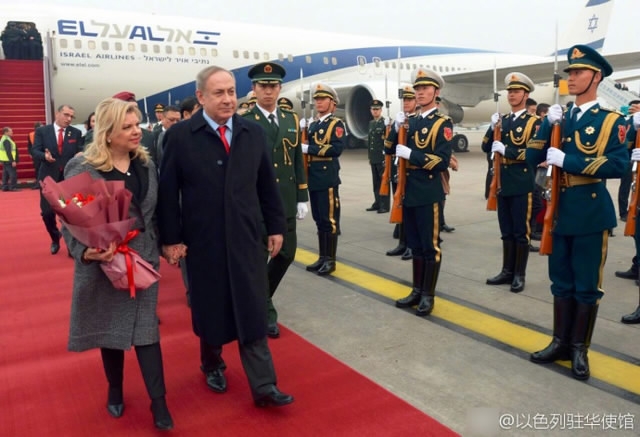 Israeli Prime Minister Benjamin Netanyahu and his wife Sara Netanyahu arrive in Beijing, China on March 19, 2017. /Photo by Israeli Embassy in China
Meanwhile, signs of the booming China-Israel trade can be seen in many places in Israel. In Tel Aviv, the city where I live, the China Railway Tunnel Group is helping to build our metro system. Meanwhile 20,000 Chinese workers are slated to arrive in Israel to build new homes which we badly need for our housing market. And that’s not all: On our Mediterranean coast, Chinese companies will build a new privately operated port in the city of Ashdod which will go a long way in helping to alleviate the excessive power of unions over trade in existing maritime ports.
This is in addition to a flood of investment by Chinese companies in Israel. According to the Israel Venture Capital research center, since 2011, there has been a 50-percent year-on-year growth in Chinese investment in Israel. Signs of this surge can be seen everywhere. Just to mention a few: In 2014, China’s Bright Food Group purchased a controlling stake in the Israeli dairy conglomerate Tnuva for 2.5 billion US dollars. In 2016, a Chinese consortium bought the Israeli gaming company Playtika for 4.4 billion US dollars in cash.  There has also been growth in other areas of trade and cooperation between the two countries, such as tourism and agriculture. 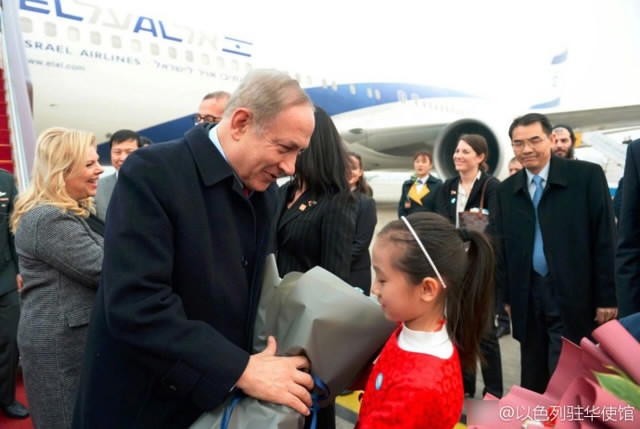 Israeli Prime Minister Benjamin Netanyahu receives flowers upon arrival in Beijing on March 19. /Photo by Israeli Embassy in China‍
And on this visit headed by Prime Minister Netanyahu to China, various Israeli Ministers who will be accompanying the PM will sign cooperation agreements with their Chinese counterparts in other fields such as science, health, education, environmental protection and aviation.
However, trade is not the only area where both countries can contribute to their citizens’ welfare. With good relations with the Palestinian Authority, Saudi Arabia and the rest of the Arab world, China is placed in a unique position to play an important role as an intermediary in the peace process between Israel and the rest of the Arab world, should it choose to do so. On top of political involvement, China's economic involvement in the Middle East, especially its One Belt One Road program, could play a crucial role in bringing increased economic stability to the region through increased trade, infrastructure development and job creation. All of these are antidotes to desperation and hopelessness, something which extremists feed on.
Over the coming days, focus will be placed on the booming economic and trade relations between China and the state of Israel. May their soaring relations continue and prosper.
(Meir Javedanfar is an Iranian–Israeli Middle East analyst. He teaches at the Interdisciplinary Center Herzliya and is a research fellow at the Meir Ezri Center for Persian Gulf Studies at Haifa University. The article reflects the author’s opinion, not necessarily the view of CGTN.)
22km
Copyright © 2017