Chinese physicist Zhao Zhongxian and Nobel-Prize-winning pharmacologist Tu Youyou were awarded China’s highest science honor, the State Supreme Scientific and Technological Award, on Monday.
President Xi Jinping presented award certificates to them and offered his congratulations during the National Science and Technology Awards Conference, an annual ceremony honoring distinguished scientists and research achievements at the Great Hall of the People in Beijing. 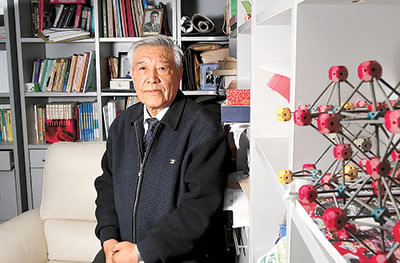 Zhao Zhongxian. /Xinhua
Zhao was rewarded for his work on superconductivity, which refers to the electric resistance of a material suddenly being reduced to zero under certain circumstances.
In the early 1980s, conditions and facilities for superconductivity research in China were very limited, but it was Zhao's passion and conviction that got him through the initial stages and hard times.
"The great rejuvenation of the Chinese nation has to contribute to human civilization. We are one fifth of the world's population. We should bear the responsibility, and we have the ability and confidence to achieve that," he said Zhao. Tu Youyou. /Xinhua
Tu, 86, became a household name in China when she won the 2015 Nobel Prize in Medicine for her discovery of a novel therapy to treat malaria, artemisinin, which drew the world's attention to the use and applications of Traditional Chinese Medicine.
"Chinese medicine and pharmacology are a great treasure chest", which "should be explored and raised to a higher level," she said.
"You've got to have faith that you can make it. I had faith. But I didn't think about winning a Nobel prize. I failed and tried again and again."
Xi, Prime Minister Li Keqiang, and other top government figures also presented awards to other scientists for their research achievements and outstanding contributions to scientific and technological innovation. The prize money for each is 5 million yuan, about 720 thousand US dollars.
1km
Copyright © 2017